Stein Hoff's boat had to be abandoned at sea, but has been found!

Last year, Stein Hoff of Norway spent 84 days at sea, rowing from New York to the Isle of Scilly off the coast of England. Stein had to be rescued from a storm at sea by a passing ship, but the cargo freighter had no way of towing his rowboat home. The Fox II had to be abandoned. Now, nine months later, the lost boat has been spotted in the desolate icy shores of Spildra, Norway, an island near the 70-degree north latitude mark. 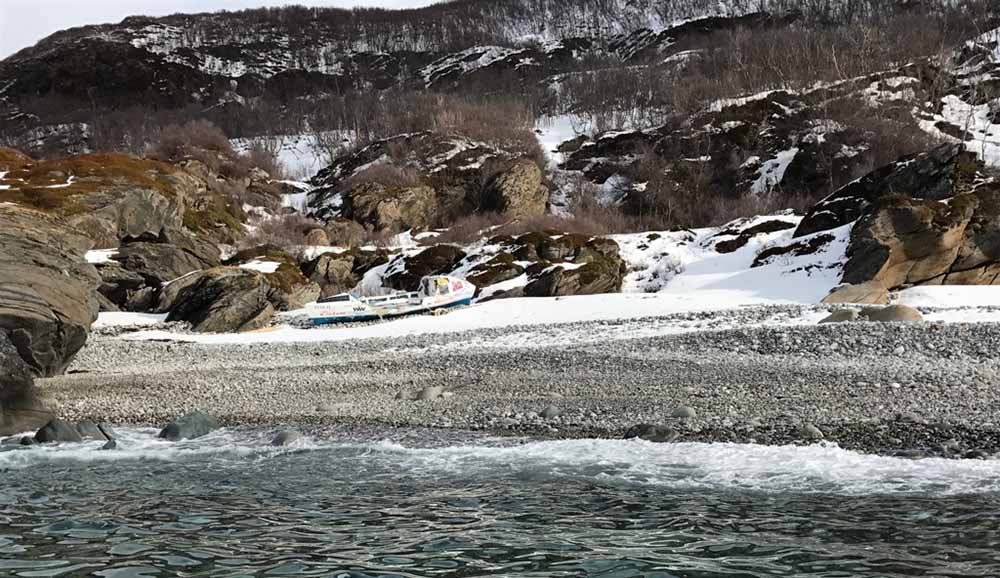 14-year-old Trygve Tidemann Bjørklund and his father spotted the boat frozen to the shoreline of the island of Spildra. Having been out fishing for the day, they were certainly intrigued by the small shipwreck on the remote island. They went ashore to investigate the curious craft, finding it to be none other than Stein Hoff’s lost boat. 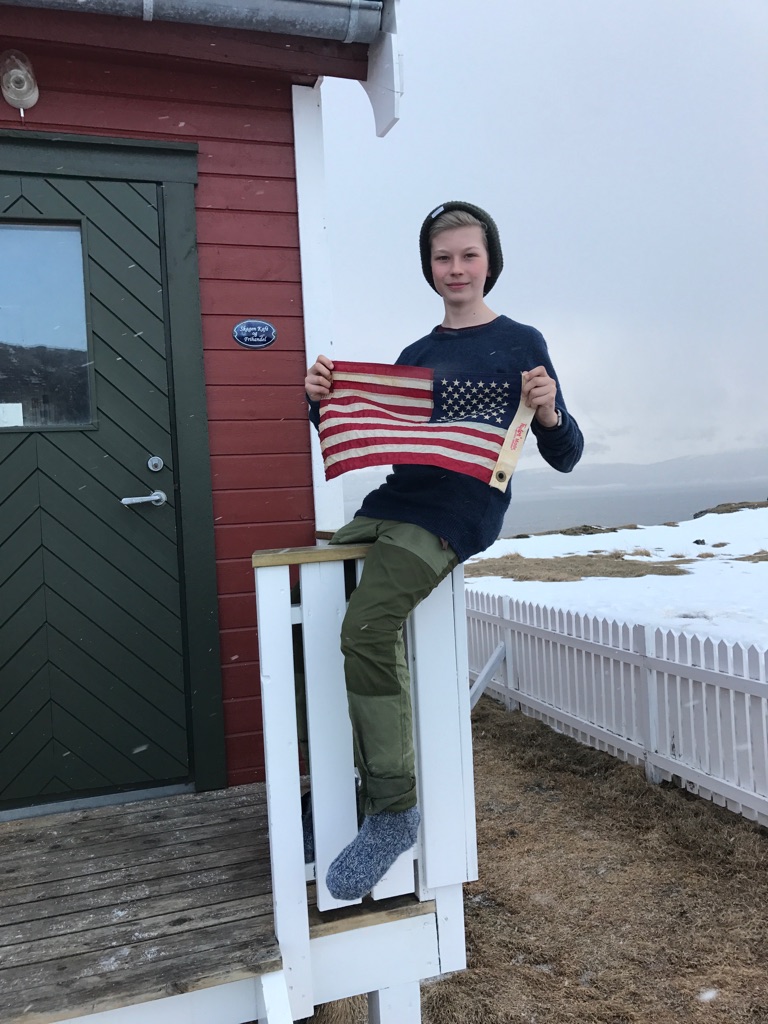 They reported damage to the side rail and main cabin, but a compartment on the front was still sealed. All of the compartments they managed to open were filled with ice, and they don’t expect it to thaw until June. 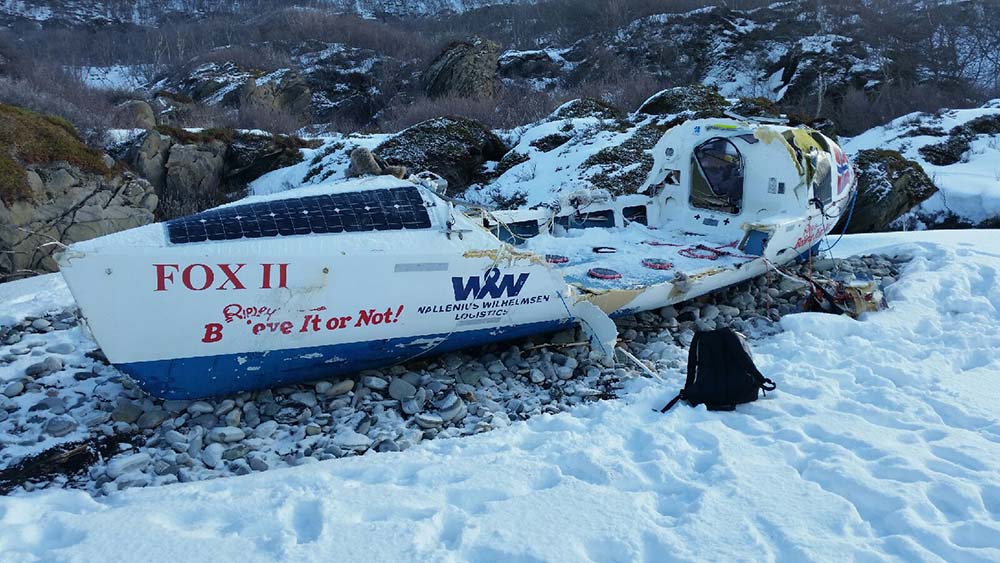 Stein continues to work on his book about the journey while he waits to recover the boat he spent 84 days rowing in stormy seas in. Due to the remote location of the island, no roads exist to reach the boat.

Ripley’s, along with Stein, think their best shot is the Hurtigruten, which takes cars and tourists to and from Norway’s northern- most islands. 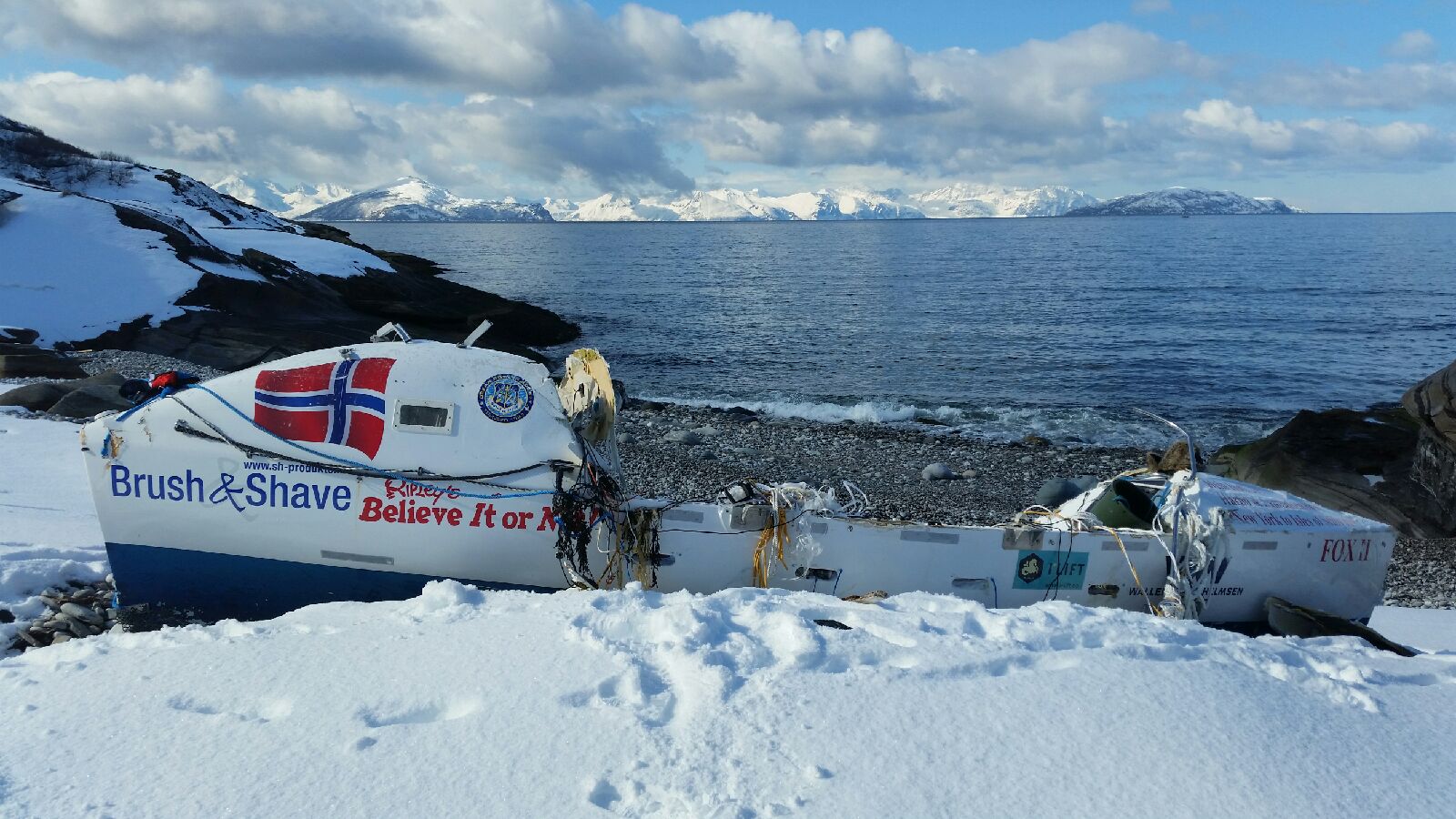 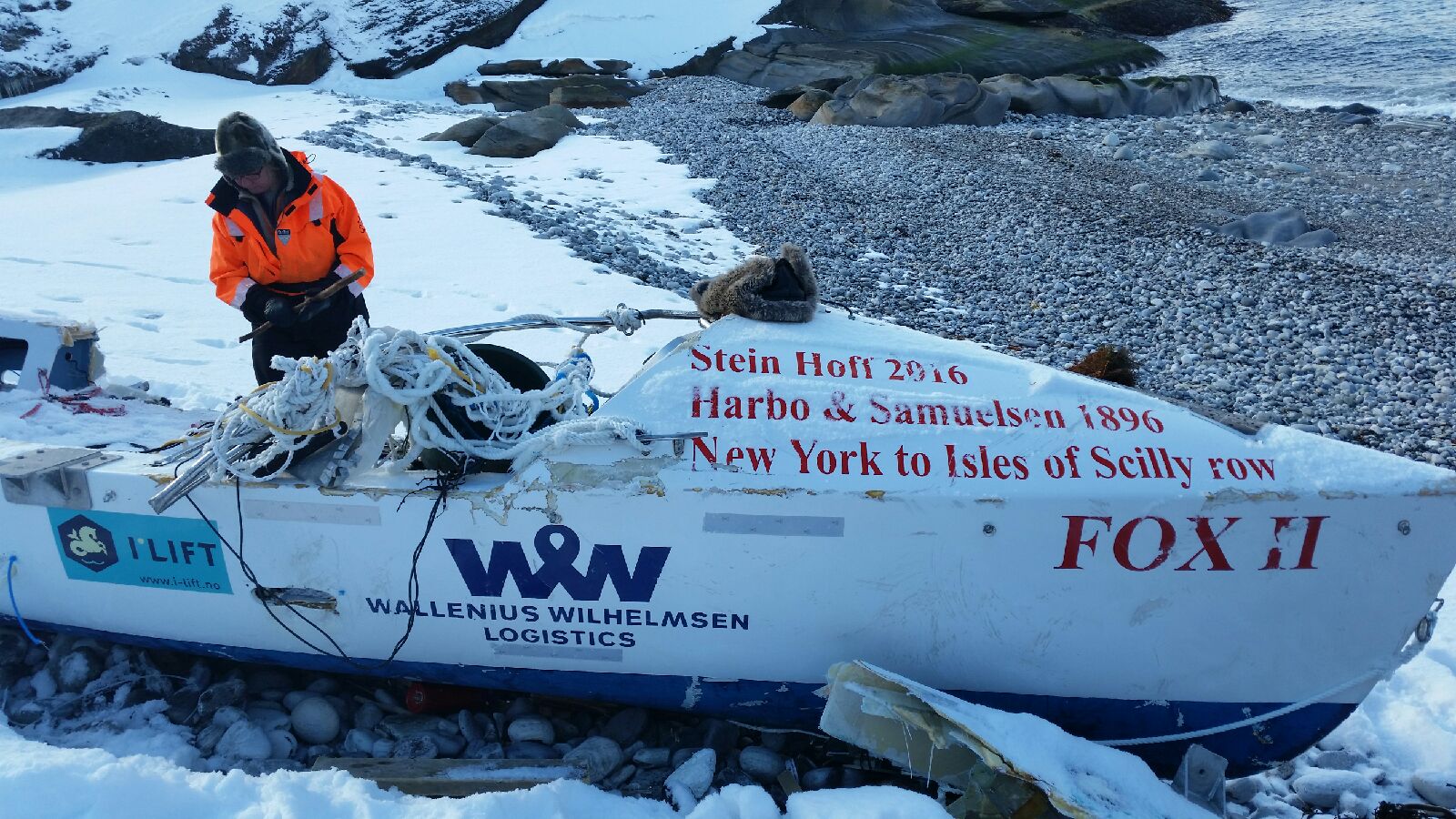 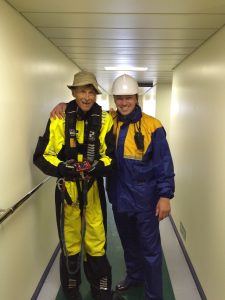 Stein Hoff just after being rescued.

Stein Hoff was rescued on August 6, 2016. He sent Ripley’s updates and photos of his dramatic rescue.

Tonight, Wednesday 10th August, it is four days since I was rescued and felt reborn, hauled up from my tossing “Fox II.” Many times I thought that little cabin was to become my coffin as the boat was knocked-down and rolled over numerous times.

During his 11-hour wait for rescue, Stein Hoff contemplated if he would survive his treacherous ordeal.

I was seriously doubting if we would ever rise, thinking water had come in somewhere and stopped the self-writing ability, so I was talking to and taking farewell with my dearest. I really thought it was the end.

His boat sustained incredible damage, and Stein thought the boat might break apart before the rescue team made it to him.

My boat was thrown around and about so violently a couple of times so that it pounded into the sea with loud thumping noise and vibration. I thought it might split. But it did not […] There was tremendous damage to my equipment. All oars cracked and floppy, one broke completely and was washed away. 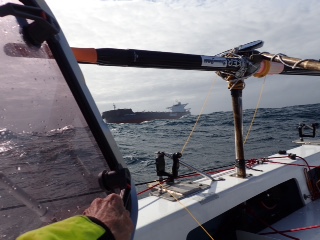 Hoff waiting for the Ludolf Oldendorff to get close enough to rescue him.

The M/V Ludolf Oldendorff, a carrier vessel, responded to Stein Hoff’s distress call via the British Coast Guard. Due to the waves and weather conditions, it took hours for the vessel to maneuver close enough to Hoff’s ship to throw him a literal lifeline.

Captain Edi Cherim (from Romania) up at the bridge, led the difficult rescue from deck level, 18 m above the sea. Maneuvering the unloaded ship (in ballast) in 6 m waves in order to get close to and shelter me was not easy. Twice I drifted away too fast. Reversing upwind past me eventually did the trick [….] After about 1hour 40 minutes since first arriving, I was standing/staggering safely on deck! 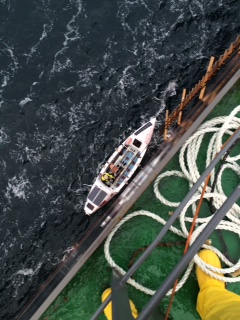 After what he describes as going from “Hell to Heaven,” Hoff talks about the contrast in his new living conditions versus what he had on his tiny boat.

Here I am, on M/V Ludolf Oldendorff, a 300 m long bulk carrier, enjoying superb hospitality and friendship, as much food as I can eat. […] I have my own cabin with a bed that does not move, wash basin and shower with warm water, toilet you can flush with a button! (I wonder how many times before I stop thinking it is a
miracle?!)

HIS JOURNEY IS NOT OVER

Though his original plan was to row from New York to the Isles of Scilly, Stein Hoff plans on finishing his journey, though not in the way he had hoped.

We carry on to Isles of Scilly to finish the planned journey. Not by rowing “Fox II” there as I had hoped for years, I am sorry to say, but to finish my business of honouring Harbo & Samuelsen […] It is a sort of pilgrimage, I suppose. But Isles of Scilly is also a charming and fascinating place. After that I can return to more normal life again in Norway.

Stein Hoff plans on putting together a full account of his harrowing journey.

Soon I will be able to start reading your greetings and comments and start posting pictures to illustrate good – and not so good – aspects of rowing the North Atlantic alone! Possibly another “Ripley’s Believe It or Not!” story! 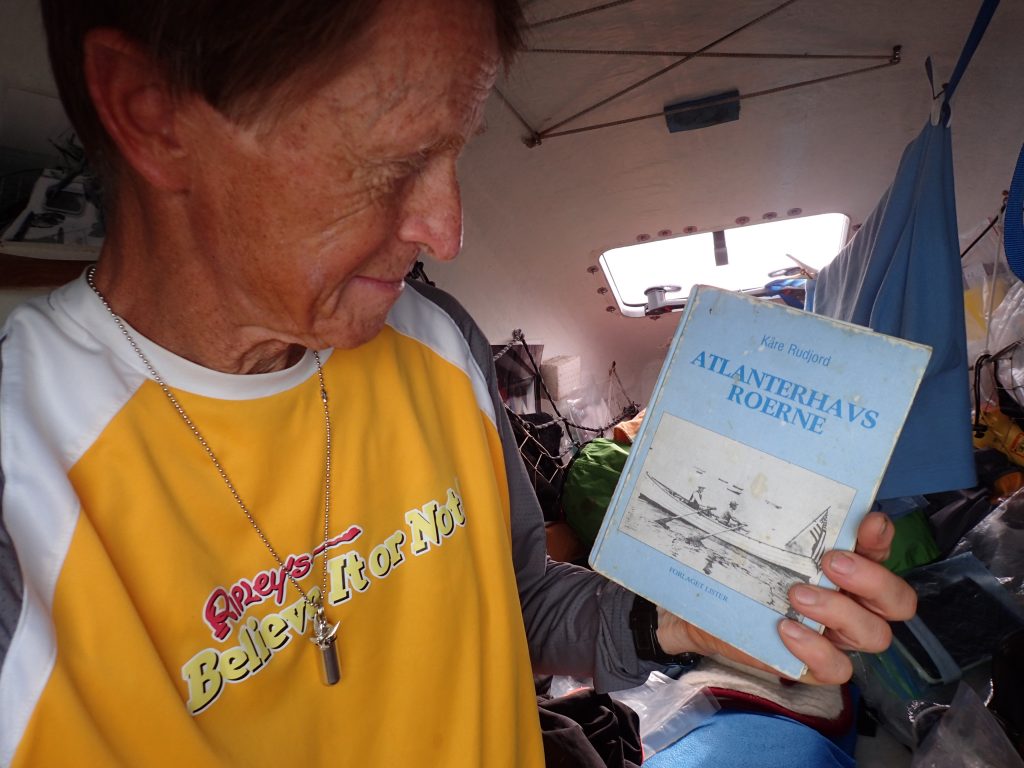 Stein Hoff holding the story of Harbo & Samuelsen, the inspration for his journey. 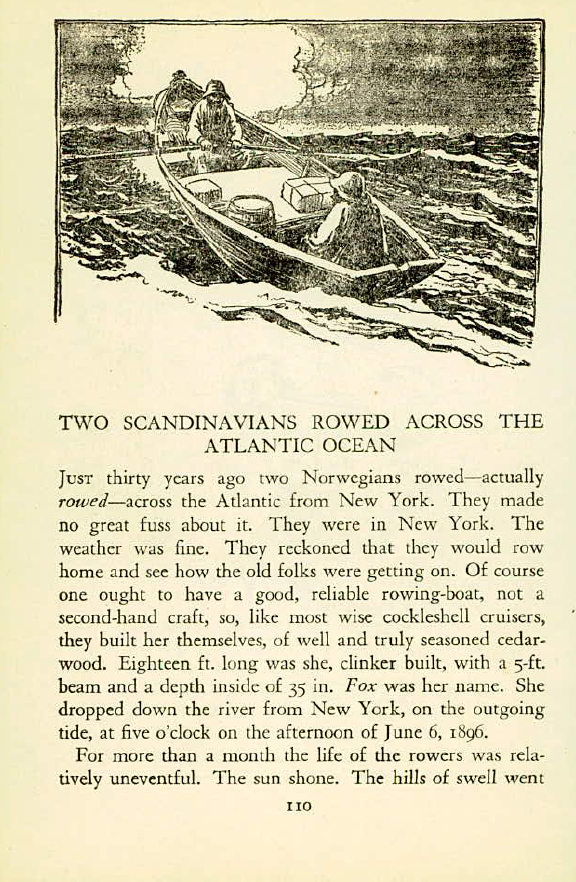 Norway’s Stein Hoff attempted to boldly row where few men have gone before – across the Atlantic ocean from New York City to England – and Ripley’s Believe It or Not! chronicled his epic endeavor.

Hoff attempted to row solo, carrying all his supplies, with no chase boats or any kind of assistance. His plan was to spend approximately 90 days at sea, covering 2,500 to 3,000 nautical miles. Perhaps most unbelievable of all – Hoff is 70 years old.

“For Stein Hoff to do it solo at the age of 70 is an amazing feat and truly a ‘believe it or not!’ event.” 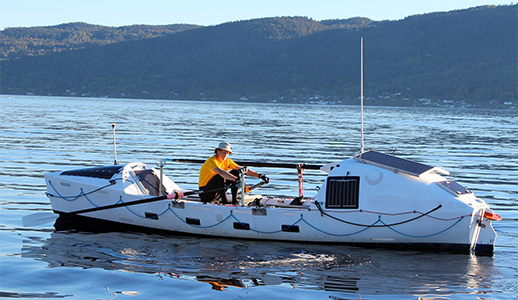 Hoff is wanted to recreate the 1896 journey of two Norwegian Americans, George Harbo and Gabriel Samuelsen, who were the first people to row across an ocean. Robert Ripley wrote about their feat in his first Ripley’s Believe It or Not! book.

Hoff named his 24-foot rowboat the Fox II, after Harbo and Samuelsen’s boat, the Fox. While it has technical advantages over its predecessor – GPS, a satellite phone, VHF radio and several safety features – there is no motor and Hoff has to row on his own.

“Only a handful of people in the world have ever completed a transatlantic row,” said Edward Meyer, Ripley’s VP of Exhibits and Archives. “For Stein Hoff to do it solo at the age of 70 is an amazing feat and truly a ‘believe it or not!’ event.”

Items used by Hoff during his journey have become part of the Ripley’s Believe It or Not! collection.

With 52 days gone and 120 nautical miles left to travel on his trip, Stein Hoff checks in with news of the row. He’s had an easier trek lately with only a few instances of water spraying up and into the boat. Condensation has been an issue, and he lost use of his lighter for a brief time, but all is well. He listens to Canadian radio thinks about life on land often.

Another Update From Stein Shows the bad and the good

Still reeling from his previous experience of suddenly taking on water and losing part of his mattress as well as some clothes, Stein Hoff has continued to move in the general direction of his destination. In this update he shines a light on the multiple bad days he’s had and the general hardships of life out at sea. But he also illuminates the good days and knows that the two will continue to come hand in hand during his journey. Only 2,070 nautical miles until his venture is complete.

Stein Hoff’s trip hasn’t been easy, but then again, no one really expected it to be. In this update, he regales us with a harrowing tale of how an unseen gust of wind and wake rocked the boat and tipped him over to one side while he was trying to make dinner in the galley. He took on a bit of water, soaked through some clothes and his mattress, but got up, set himself right, dried out, and found himself more determined to accomplish his goal than ever.