Posts in category The Unbelievable Voyage

With only 804 nautical miles to go, Stein Hoff is closing in on his destination, but there’s a storm brewing up ahead. It’s time to batton down the hatches and try to wait it out to the best of his ability. He’s getting all of his necessary supplies in order and keeping everything close at hand as he prepares to lock himself inside his cabin and wait the storm out. Or maybe the story storm will shift, and the winds will be able to propel him towards his destination. Only time will tell.

Stein Hoff has been stuck in a fog. He’s still making progress, but it’s less interesting and visual than it would be if the area were clear and visibility were high. He’s got pods of dolphins to keep him company, though, and he’s seen a few of them every day for awhile now. He’s also got some curious Fulmar gulls flying around and landing close to his oars for a closer sight of this solitary rowing man. He hasn’t seen any whales yet, but as he makes his way farther through the North Atlantic, it’s only a matter of time before he does.

Day 60 starts off pretty well for Stein Hoff. The wind is against him, but he doesn’t really mind it. He’s making pretty good progress and has even seen a few wales. It’s much colder in the North Atlantic than it is down in sunny Florida, but he’s got his gear. And then, out of nowhere, the weather turns, and he’s forced to deal with huge winds, waves, and sprays. The forecast said it should calm down, but it did the opposite. Things are looking rough for our traveler.

With 52 days gone and 120 nautical miles left to travel on his trip, Stein Hoff checks in with news of the row. He’s had an easier trek lately with only a few instances of water spraying up and into the boat. Condensation has been an issue, and he lost use of his lighter for a brief time, but all is well. He listens to Canadian radio thinks about life on land often.

Another Update From Stein Shows the bad and the good

Still reeling from his previous experience of suddenly taking on water and losing part of his mattress as well as some clothes, Stein Hoff has continued to move in the general direction of his destination. In this update he shines a light on the multiple bad days he’s had and the general hardships of life out at sea. But he also illuminates the good days and knows that the two will continue to come hand in hand during his journey. Only 2,070 nautical miles until his venture is complete.

Stein Hoff’s trip hasn’t been easy, but then again, no one really expected it to be. In this update, he regales us with a harrowing tale of how an unseen gust of wind and wake rocked the boat and tipped him over to one side while he was trying to make dinner in the galley. He took on a bit of water, soaked through some clothes and his mattress, but got up, set himself right, dried out, and found himself more determined to accomplish his goal than ever.

While he rows his way across the Atlantic Ocean, Stein Hoff has access to a satellite phone. Luckily, we are some of the few people with access to his direct line, and we’ll be using that to bring you regular updates on Hoff’s progress as he rows across the Atlantic. In our first update, we see that Hoff is doing fine after 24 days, but his original estimate of 90 days might have been a bit too optimistic. 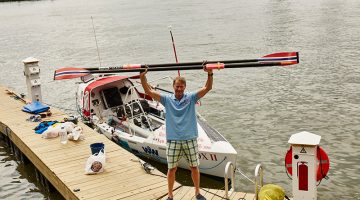