In other words, this sim represents the perfect escape for people in the grip of a global pandemic. You assume the role of a cherubic human in a town filled with happy, anthropomorphic creatures. Then, you spend your days catching bugs, picking fruit, and fishing. Not a terrible way to pass a quarantine, right?

What you may not know, however, is that the game contains plenty of Easter eggs from Japanese culture. Let’s explore the most obvious and interesting ones.

Animal Crossing: New Horizons includes eagles, horses, alligators, hamsters, and even hippos. However, some characters in the game are uncompromisingly Japanese, like Tom Nook, Timmy Nook, and Tommy Nook. At first glance, the Nooks look like raccoons to most game players. But they’re actually Japanese raccoon dogs or Tanukis, animals with a long-standing folkloric history.

In Japan, the tanuki is both a symbol of wealth and a trickster like coyotes in Native American culture. Traditionally, tanuki had enormous testicles, which they could knead into fishing nets, raincoats, or other objects as needed. (Handy, right?) Of course, you won’t find these characters well-endowed in the game (it’s kid-friendly, after all!), but the supernatural industriousness of these mythic animals remains intact.

As local real-estate tycoons and shopkeepers, they never seem to run out of money.  You’ll also notice that your items magically appear as leaves in Animal Crossing. That’s a nod to the mythic tanuki’s powers of metamorphosis, thanks to their use of magical leaves.

Like the Nooks, Kabuki returns in New Horizon as the cranky tomcat covered in red face paint. If you’re lucky, you’ll get to hear his rendition of “Bubblegum K.K.” (Impatient types can check it out here.) The fact this grumpy little cat sings shouldn’t come as much of a surprise. After all, he’s the namesake for one of Japan’s most ancient dramatic artforms, Kabuki Theater.

Kabuki Theater is a form of classical Japanese dance-drama showcasing highly stylized mime, dance, and song. Performed only by male actors, it relies on exaggerated body movements and gestures to express emotions. Kabuki Theater performers also wear elaborate white, red, and black makeup, resembling red flames and lines on their faces and bodies. It’s no coincidence that the patterns on Kabuki’s body look like those of these actors.

Coco and the Haniwa

If you’ve ever thought to yourself, “Coco is a weird-looking rabbit,” you don’t know the half of it! With her black holes for eyes and a mouth, something appears amiss with this bunny. What’s more, her name evokes the terrifying myth of Coco, the child-eater. A demonic spirit associated with the Bogeyman, Coco hunted down and devoured disobedient kids. 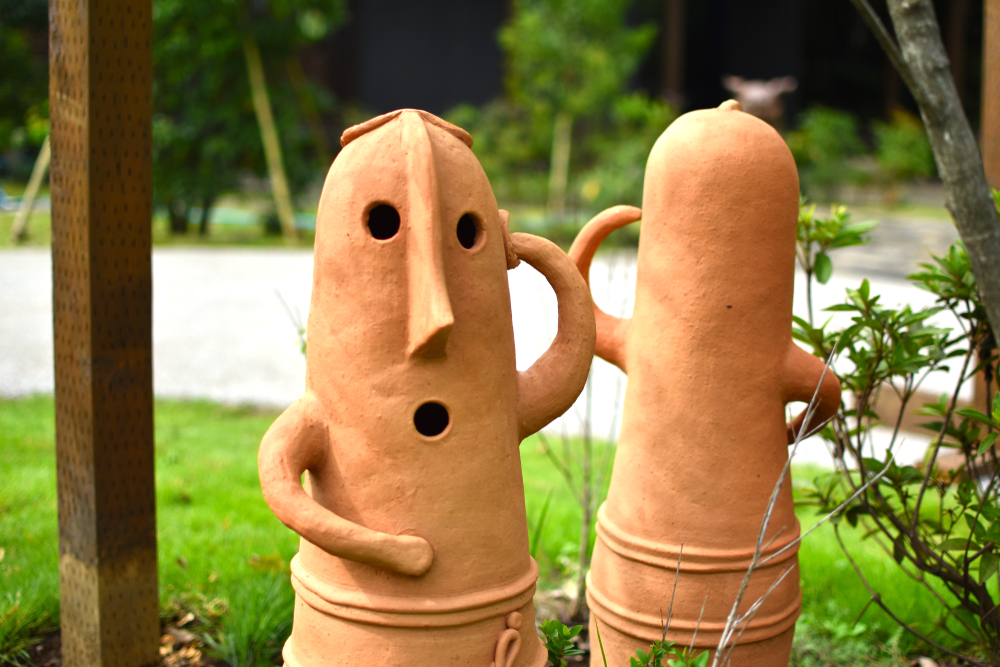 Coco’s strange appearance is also reminiscent of haniwa, ritualistic clay figures buried with the dead in Japan. According to legend, the figures invited deceased spirits to inhabit them. Although Coco proves a pleasant character that wouldn’t harm a mouse, everything points to the fact she’s undead.

Kapp’n the Turtle… Not!

In Japanese folklore, kappas or demons preyed on children near lakes and rivers. Their name represents a combination of two words kawa (river) and wappa (child), and they are said to lure people into water and then pull them under. Hanzaki or Japanese giant salamanders, predators that prey on smaller animals by grabbing them with their powerful jaws, inspired kappa folklore. 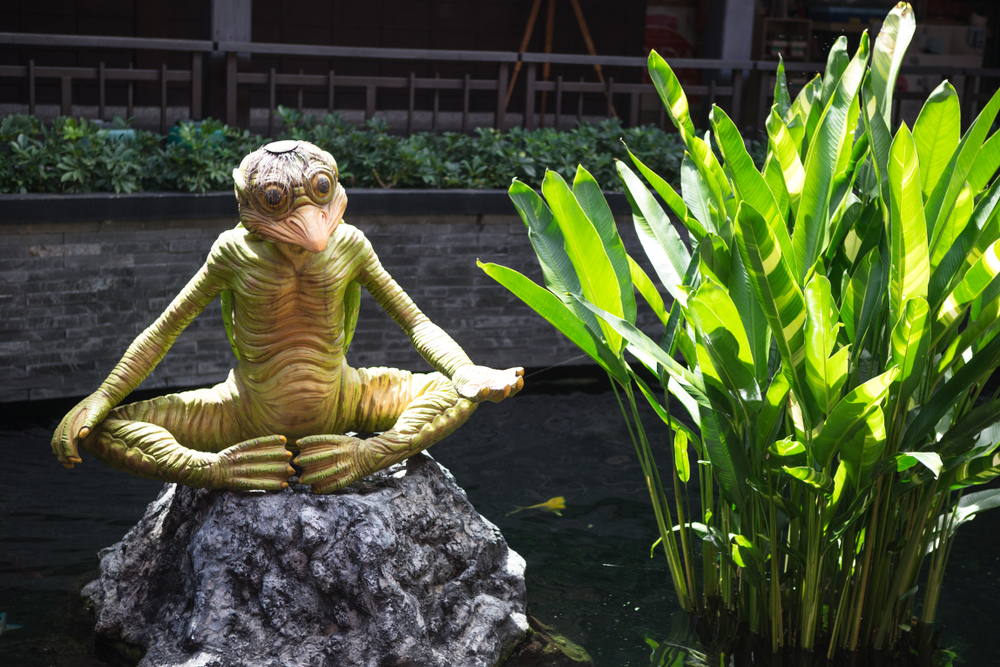 Like tanukis, kappas often play the role of the trickster, but their “tricks” range from the innocent to the downright malevolent (e.g., drowning victims, eating human flesh, kidnapping kids). As it turns out, the Animal Crossing franchise also includes a nod to the kappa in the form of Kapp’n. Although he refers to himself as a “turtle,” he is, indeed, a kappa. This fact makes his role as the ferryman all the creepier. Although Kapp’n doesn’t appear in New Horizon, fan outcry may lead to his return in future updates or versions of the game.

Redd and the Kitsune

Unlike Kapp’n, Redd (a.k.a. Jolly Redd, Crazy Redd, and Cousin Redd) makes a return in New Horizons as the shady furniture shop owner and purveyor of fake artwork. Why all the names? When you run a murky storefront with questionable business practices, you need an alias or three.

A callback to the Japanese folkloric character of the fox or kitsune, Redd personifies some of this folkloric creature’s traits through his less-than-honest business dealings. According to legend, kitsunes exhibited an expert ability to trick others. In some tales, they even go so far as to shapeshift into men or women, taking on roles as loyal friends, lovers, or even spouses.

First introduced in Animal Crossing: Wild World, the Lucky Cat Series (a.k.a. Welcome Kitty Set) consists of four furniture items to spruce up your virtual home. These cute kitties hearken back to the Japanese Maneki-neko (literally “beckoning cat”), believed to endow properties with good luck. You’ll often see them displayed outside businesses in Japan, such as restaurants, parlors, laundromats, and salons. Maneki-nekos come in a variety of colors and degrees of ornateness. 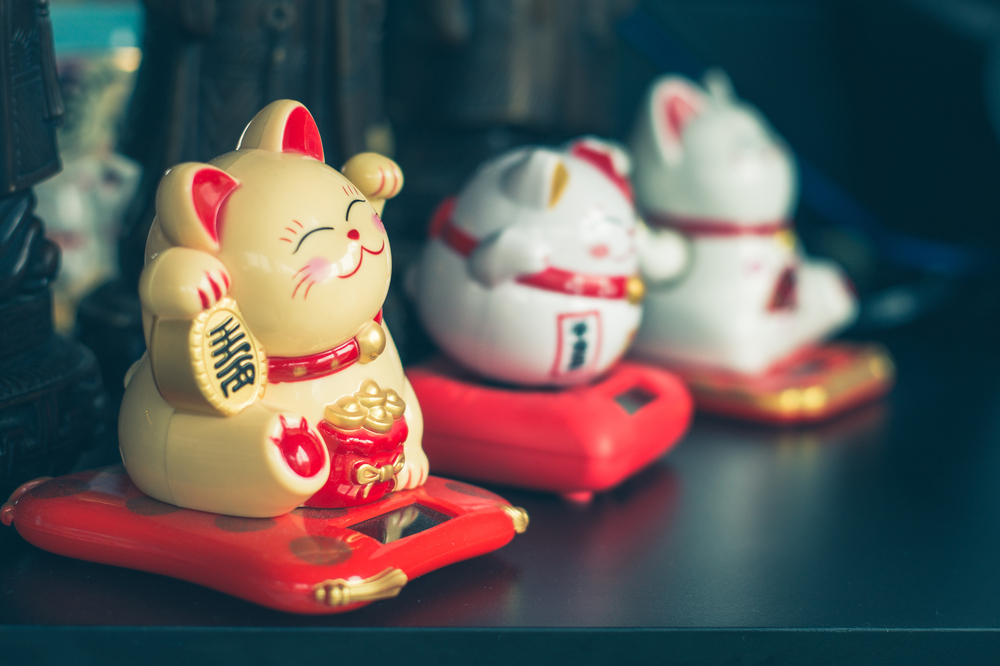 In Animal Crossing, the set of four includes two white cats, a black cat, and a gold cat. Their coloring and paw placement endows each one with special meaning. For example, the white cat with the raised right paw symbolizes good fortune and wealth. The white cat with the left paw up is thought to bring in more customers. Both white cats are also associated with positive energy, purity, and happiness. The black cat repels bad people and evil. Last but not least, the golden cat attracts prosperity and wealth.

Besides animals, New Horizon also contains nods to iconic Japanese flora. Game makers introduced bamboo in the previous version of the game, Animal Crossing: New Leaf. In that game, you could procure the plant from Leif, the Sloth character. Locating the plant has expanded in New Horizons with plenty of opportunities to find it on mysterious islands accessible from the seaplane port of your island.

Once you’ve cultivated your bamboo into mature plants, you can dig around the stalks to harvest bamboo shoots, either selling them or using them to grow more bamboo. Since New Horizons also comes with more land and chances to design ponds and dirt paths, you can cultivate a bamboo forest just like the real ones towering majestically near Kyoto and Tokyo.

Every year, when the cherry blossoms (sakura) bloom, festivals take place in Japan, where visitors partake in hanami or the pastime of viewing flowers. Cherry blossom festivals are an essential custom in Japan, so much so that local news includes hanami forecasts. These forecasts clue readers in on the best time to view the blossoming trees in various parts of the country.

Animal Crossing involves living and working on a tropical island that changes seasonally. That’s why the game begins by asking players which hemisphere they live in, thereby keeping seasonal changes accurate. For those located in the Northern hemisphere, you’ll experience cherry blossom season at the same time as in Japan. To commemorate this event, you’ll receive a special limited-edition DIY recipe for creating a hanami picnic.

How does it work? Use your net to collect falling sakura petals. For every ten cherry-blossom petals that you get, you’ll receive a bento box filled with sandwiches, fruits, a packet of chips, and some orange juice. While there are several other recipes in New Horizon that rely on cherry blossoms, the hanami picnic complete with Bento boxes is just about as Japanese as it gets.

From the tanuki to the kitsune, there’s more to the cute animals in Animal Crossing: New Horizons than you may realize at first glance. Some of them even have bizarre and, quite frankly, terrifying backstories, like Coco and Kapp’n. Nonetheless, the game remains a fun, whimsical nod to Japanese culture. It even contains futuristic toilets for the post-hanami picnic party. But that’s a story for another time.