The largest crystals in the world, some weigh in excess of 50 tons! 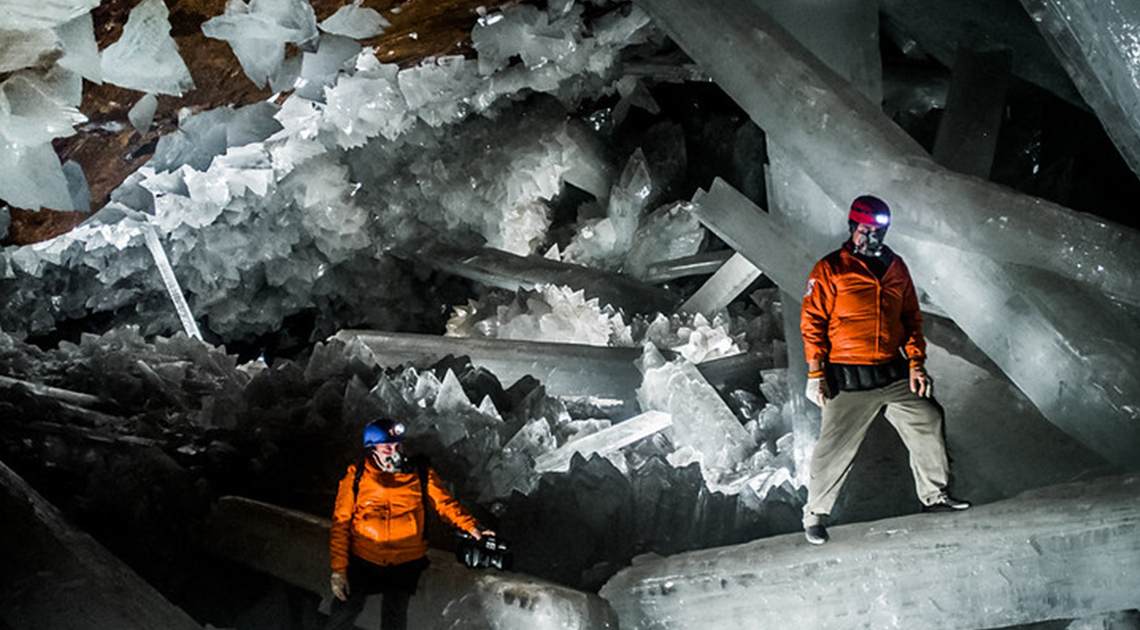 Buried 984 feet below the Earth’s surface, you’ll find an otherworldly landscape of crystals dwarfing human visitors. Located in the subterranean depths of the Naica Mountain in Chihuahua, Mexico, this strange landscape has been dubbed the “Sistine Chapel of Crystals.”

Some crystals in the cave measure upwards of 36 feet long. And the heaviest ones weigh as much as 55 tons, Believe It or Not! Until recently, the natural processes involved in forming these larger-than-life crystals remained a mystery.

Here’s what scientists have since learned about how these crystals grew to such immense size.

Two miners working for Industria Peñoles discovered Mexico’s Cueva de los Cristales (Cave of Crystals) by accident while excavating a new tunnel in 2000. They were amazed by the sight of the natural marvel and its massive crystal structures.

A cavity in the limestone rock, the Cave of Crystals is horseshoe-shaped. It measures approximately 30 feet wide by 90 feet long. Perfectly faceted, crystalline blocks cover the floor. Massive crystal beams jut out from both the floor and walls, creating a prismatic effect.

According to Juan Manuel García-Ruiz, from the University of Granada in Spain, “There is no other place on the planet where the mineral world reveals itself in such beauty.”

Journey to the Center of Crystal Cave

Yet, it would take years of scientific study before researchers determined how the giant-sized crystals grew. García-Ruiz and a team of researchers have labored away in the inhospitable environment of the cave for answers. Their working conditions proved brutal.

Temperatures in the cave reach upwards of 136 degrees Fahrenheit with 90 to 99 percent humidity. If that isn’t bad enough, the air in the caves is acidic. And, of course, there are no natural sources of light.

While these peculiar conditions have been ideal for generating crystals of epic proportions, they’re downright dangerous for researchers. As a result, García-Ruiz and his team wear special cooling suits each time they enter the cave. They also strictly adhered to no more than 45 minutes inside.

The Mystery of the Gigantic Crystals Solved

After studying tiny pockets of fluid trapped inside the crystals, García-Ruiz and his team concluded that the geological formations thrived for one reason: the strange environment of the cave. They remained submerged in mineral-rich water at the constant temperature of just below 140 degrees Fahrenheit. 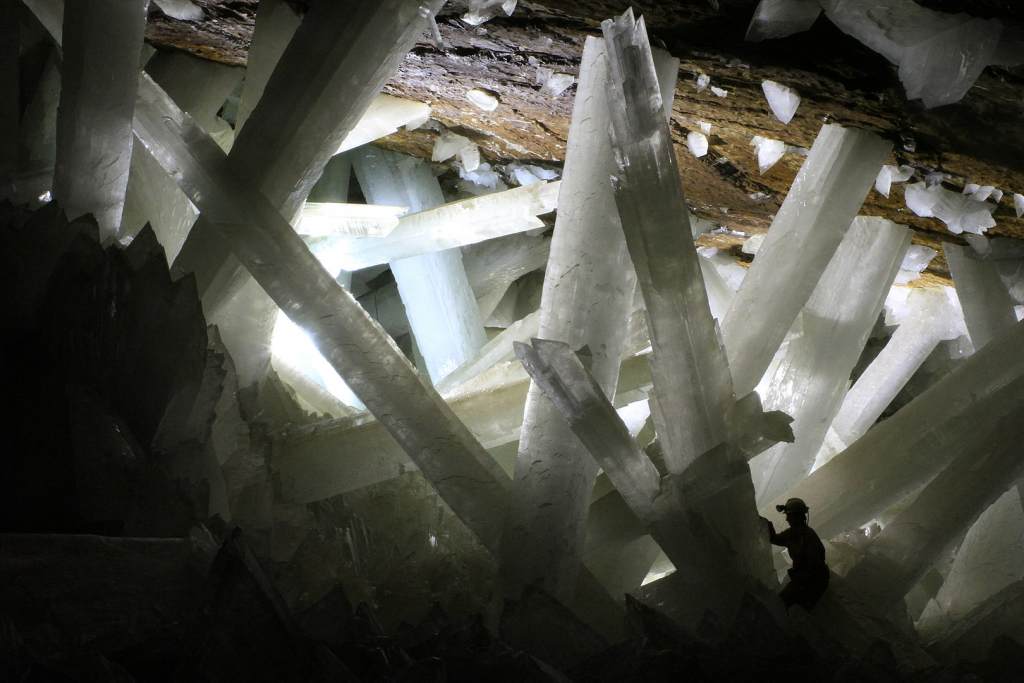 About 26 million years ago, volcanic activity birthed Naica. It also filled the mountain with high-temperature anhydrite, a building block of crystals. Anhydrite is the anhydrous (lacking in water) form of gypsum. At 136 degrees Fahrenheit, anhydrite is stable. Below that temperature, it transforms into gypsum.

García-Ruiz and his team hypothesize that when the magma beneath the mountain started to cool, the temperature dropped. As a result, the anhydrite began to dissolve. As it slowly enriched the waters with calcium and sulfate molecules, these minerals deposited in the cave as giant selenium gypsum crystals.

As García-Ruiz notes, “There is no limit to the size a crystal can reach.” That said, the conditions to support such massive growth had to remain consistent for thousands of years. Just below the anhydrite-gypsum transition temperature. Researchers now believe the largest crystals inside the cave took more than 500,000 years to form.

Of course, the only reason humans have recently had access to the caves is because of the mining activity beneath Naica Mountain. It involves pumping the caves of their subterranean waters. The Naica mining complex contains some of the largest deposits of silver, lead, and zinc on the planet.

How to Preserve the Cave of the Crystals

How to preserve the Cave of Crystals has left the mining company in a quandary. If they stop mining operations and allow the caves to refill, then the crystals will again enjoy the ideal conditions for growth. If the caves remain drained, however, visitors can see these marvelous formations firsthand.

At present, the caves are closed to all but members of the scientific community. This decision is based on a variety of factors, including the cave’s extreme conditions. Without cooling suits, people who enter the mine could perish in a matter of minutes from overheating. However, it’s possible to see one of the crystals extracted from the cave, a 32-inch Selenite formation, at the Astro Gallery in New York City.

Next post Does an Apple A Day Keep The Doctor Away?