This strange temple was built only at night by the light of the Moon with rumored mystic inspiration. 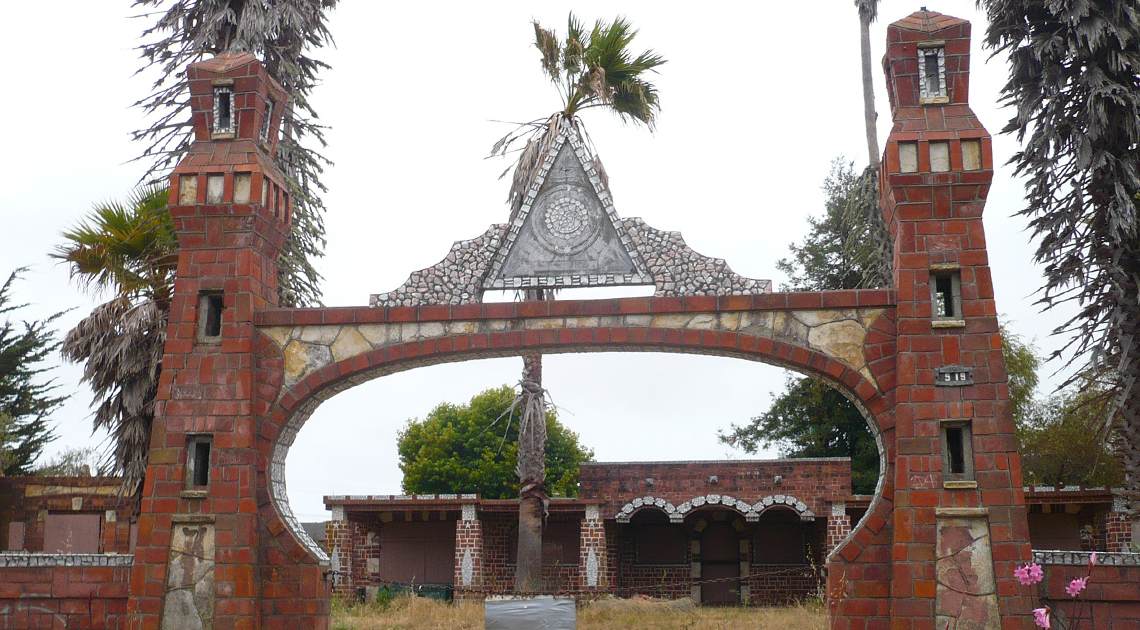 When we think of 1940’s America we think of World War II and Big Band music, not yoga and Eastern spiritualism—which seem to belong to the “hippie movement” of the 1960s and beyond. Yet in the late 1930s or early 1940s, a Santa Cruz brick mason named Kenneth Kitchen built a red-brick love-letter to Hindu folklore and cosmology. Utilizing symbols from planets to pyramids, stars, obelisks, and inlaid abalone, he constructed an archway called The Gate of Prophecy.

Even empty, The Gate of Prophecy has always held speculation. The exterior supposedly contains hidden symbols, and the triangle on the gate is allegedly said to align with the chimney right before a disaster. Rumor has it that he built the structure only at night by the light of the moon.

Just like a ghost, Kitchen abandoned his magnum opus in 1957 and vanished, never to be seen or heard from again. The property changed hands a few times but was effectively abandoned by the 1990s, hosting only teen vandals and other campfire-building temps. The temple at 519 Fair Avenue has been called the Court of Mysteries, the Unorthodox Chapel, and Surreal Estate.

Now, Artina Morton and Douglas Harr call it home…sort of. 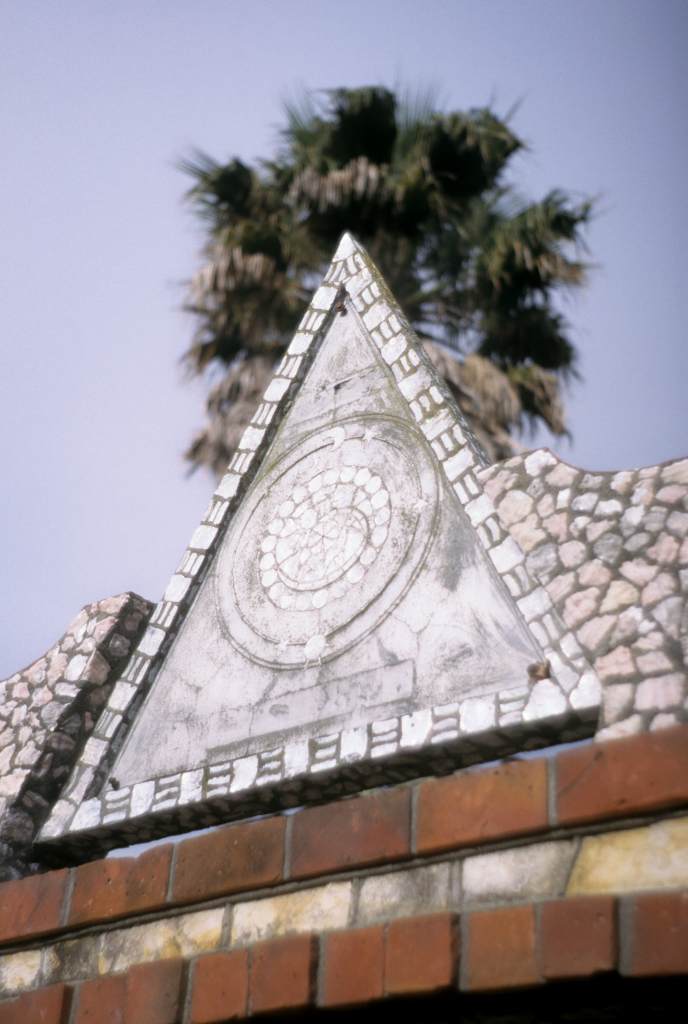 Morton and Harr bought the property in 2016 and have built a home separate from the “Yogi Temple,” as they call it. They’ve been stewarding and restoring this historic landmark, bought one year after looking at it for the first time.

“My husband was very drawn to the property,” Morton says, though it was boarded up on their first visit. They came back a year later when a realtor was able to let them in. Morton had her reservations about the property and the accompanying feeling that was bound to come from this eerie, decades-vacant building.

“If I walk in that building, and there’s weird or negative mojo. I’m not going to be able to sage that away,” she told her husband, “but I would try for you.”

But, any reservations she had tucked away suddenly vanished when the sunshine flooded in through the newly opened doors.

“The minute I saw the inside of the building, I thought, it has this great positive energy to it,” Morton says. “The attention to detail in the architecture on the inside is just inspiring,” and other people “feel really good when they’re on that property.” Morton thinks it might even be a vortex: a place of concentrated spiritual energy. In this case, the energy is on the positive side.

Upon further investigation, it turned out there was a personal, spiritual reason Harr was so drawn to the property.

Two weeks after buying, the couple had been given a spiral-bound collection of stories and theories, though no certainties, about why Kitchen built this glorious oddity. One theory was that he had come to help his brother, Raymond, a stonemason, with some construction work in the area where the brothers owned a fair amount of land. 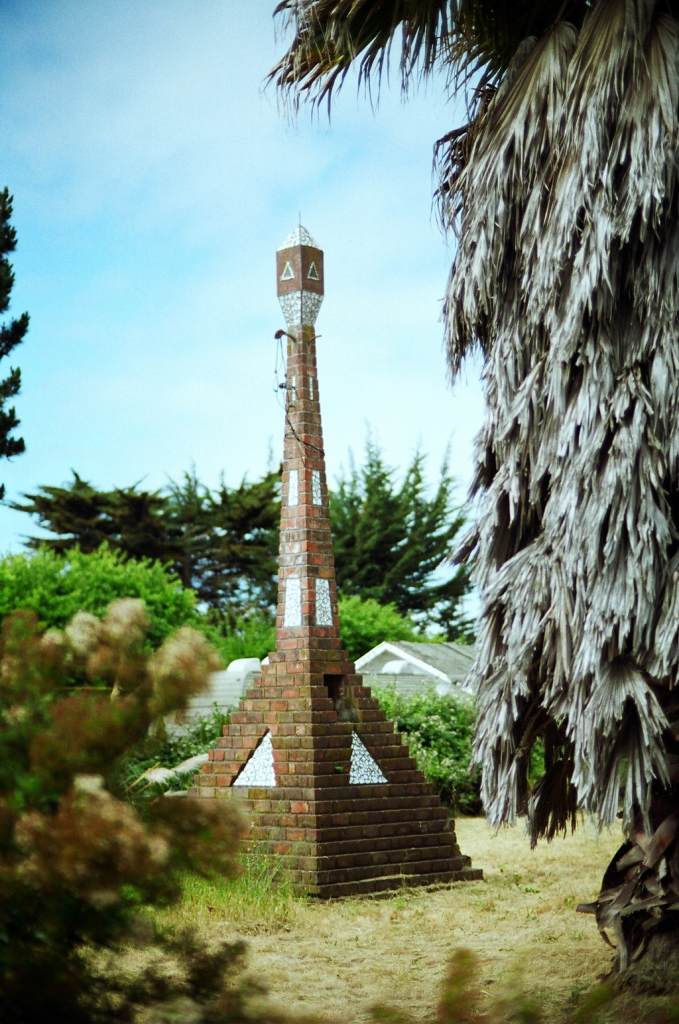 Unfortunately, the Kitchen brothers didn’t get along. Raymond told Kenneth that he and his anger problem needed to “Go find some peace,” Morton says, so Kenneth did just that. He went to the Self Realization Fellowship Center (SRFC) in Los Angeles and learned teachings of the famous yogi, Yogananda Paramahansa, before returning to Santa Cruz to live in a small shack on his property. He even raised goats to sell dairy products while he built his masterpiece.

The couple realized that Harr was likely so drawn to the property because his own brother had been a monk at the SRFC. “Doug grew up seeing these buildings,” Morton says. “We thought it was a real kismet thing.”

Written in the Stars

There are other stories and theories, of course, that muddle the truth behind this mystery.

One claims that Kitchen was in Turkey during World War I and developed his affinity for Eastern and Occult philosophies then. Another alleges that during World War II he also built a device in his backyard that could stop submarines.

Morton favors the tale about Kitchen studying to be a yogi; the one where he “felt at peace for the first time in his life. You can sense it when you’re on that property.”

The couple’s restoration of this unique space seems to have been as much of a labor of love for them as it was for the original builder. Morton has documented much of the process in a blog called The Red Brick Castle that covers the initial detailed work of restoring a beloved landmark to the unexpected find of antique tiles buried under the temple. 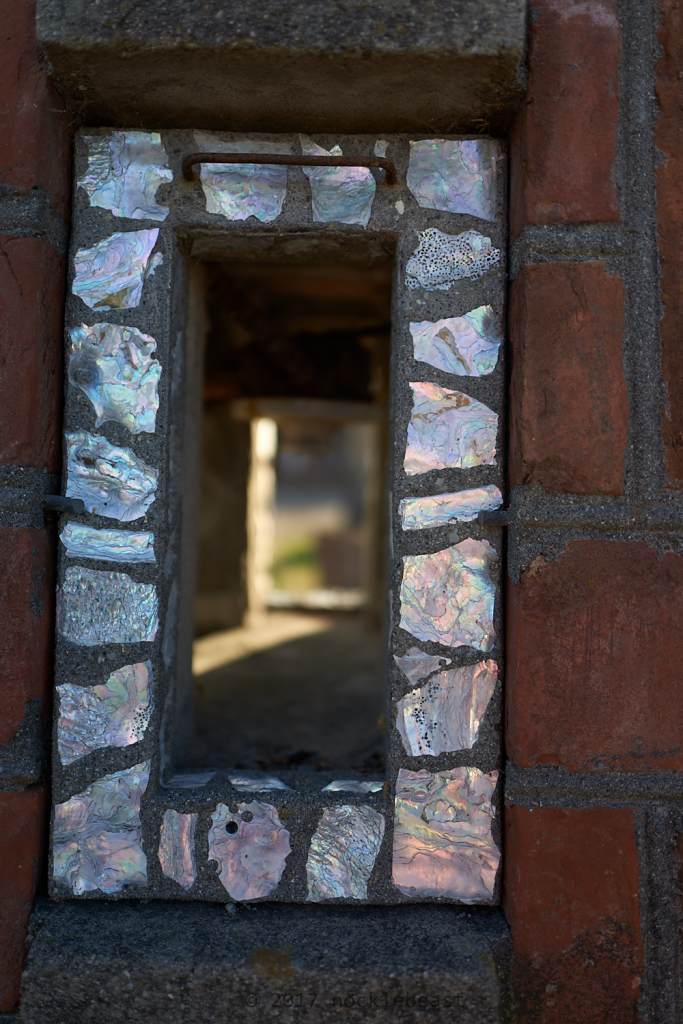 Close-up of the mother of pearl inlaid in the brick./CC Mark Nockleby via Flickr

The temple will be the couple’s creative studio space, but they also look forward to opening it for public events. Morton and Harr are hopeful the Court of Mysteries will be ready for a Haunted Courtyard event this Halloween.

Something tells us the stars will align in their favor.

Previous post Biosphere 2 The Second Earth Experiment Of The 1990s