Despite the hype, Egyptian mummy curses are shockingly rare and downright bland. 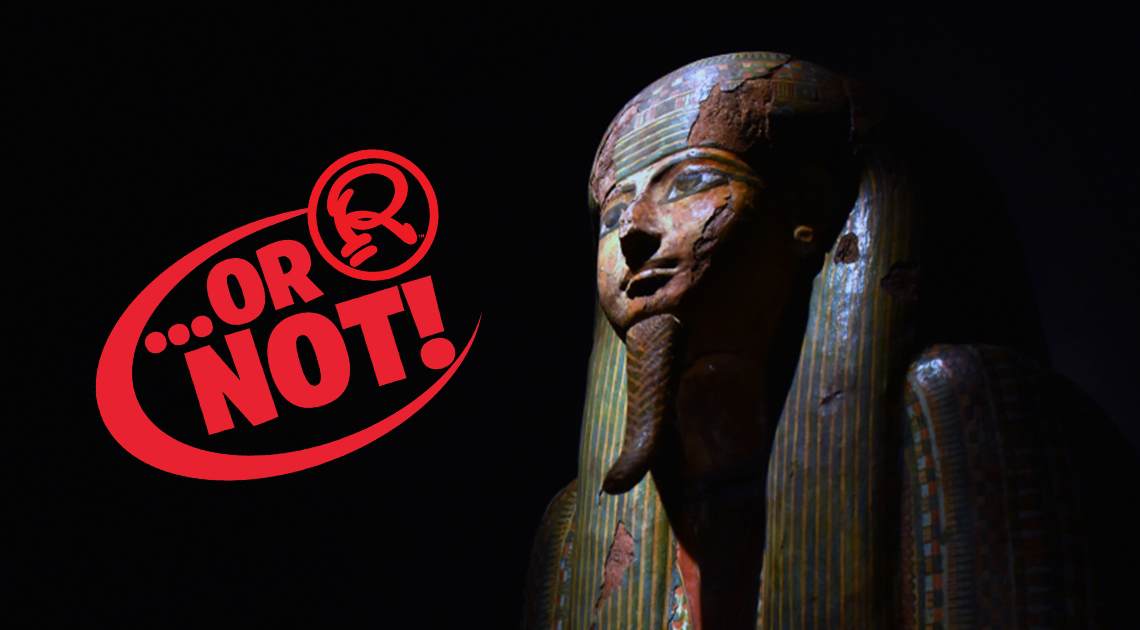 In the low-budget horror flick, The Mummy (1999), Brendan Fraser and Rachel Weisz team up to thwart the curse of an ancient priest-turned-mummy, Imhotep. The mummy wreaks havoc on the modern world, bringing back the ten plagues, before his final send-off into nonexistence. A reboot of the 1932 film (of the same name), starring Boris Karloff as Imhotep, grossed $416.4 million worldwide.

Many sequels and spin-offs would follow. They include The Mummy (2017) starring Tom Cruise. Cruise plays a hapless soldier of fortune who stumbles across the ancient tomb of an entrapped Egyptian princess. In the process, he unleashes an unwanted romance with deadly consequences. Think the ancient Egyptian version of Fatal Attraction… without the bunny.

What do these movies have in common? The iconic “Curse of the Pharaohs.” But were all Egyptian tombs hexed? It’s time to debunk this common misconception.

Egyptian Tombs and the Afterlife

Building a tomb in ancient Egypt represented a massive undertaking. It required an immense investment of time, labor, and wealth. As a result, those who could afford tombs got to work on them as soon as possible. That way, their final resting places were ready when fate intervened. As for the Afterlife, Egyptians called it A’aru or the “Field of Reeds.” In a nutshell, it represented Egypt 2.0, complete with an ever-shining sun, crops burgeoning with produce, and the life-giving waters of the Nile River.

Egyptians believed humans consisted of three parts, the ka, the ba, and the akh. The ka represented the life force or “double” of the deceased, and it resided in the tomb after death. To survive, the ka needed to receive offerings. Ba referenced what we might call the “soul,” symbolized by a human-headed bird. This entity flew around during the day, retiring at night to the tomb. Finally, the akh or “spirit” traveled to the Underworld for Final Judgment and entrance into the Afterlife. All three aspects of the individual played essential roles in Egyptian cosmology.

Within this construct, the tomb chapel provided a location where the ka and ba resided. It also represented a place family could visit and bring offerings during special festivals. Like people today, the ancient Egyptians longed to be remembered and honored, even in death. As a result, preserving the tombs of the dead represented a major preoccupation.

Besides crafting tombs to stand the test of time, ancient Egyptians preserved the dead through a gruesome embalming process that lasted for 70 days. Special priests officiated over the preparation of the corpse for treatment and wrapping.

They carefully removed the brain through the nostrils, meticulously avoiding damage to the face. The organs were also taken out and placed in canopic jars to prevent rapid decay. After drying the body, adding fake eyes, and plumping up sunken areas with linen and other materials, priests wrapped each corpse in hundreds of yards of linen.

Much care and effort went into the preservation of the dead and the preparation of their burial chambers. It’s little wonder that 19th-century authors, steeped in Gothicism, Orientalism, and Occultism, let their imaginations run wild after reading about Egyptology’s latest findings.

Jane Louden’s novel The Mummy (1827) first described an ancient Egyptian rising from the grave. Other authors soon contributed to a burgeoning “mummy” literature, including Louisa May Alcott with “Lost in a Pyramid or the Mummy’s Curse” (1869) and Sir Arthur Conan Doyle with “Lot 249” (1892). By the early 20th-century, movies about Egyptian mummies were all the rage. They included The Mummy (1911), The Egyptian Mummy (1914), and The Eyes of the Mummy (1918). 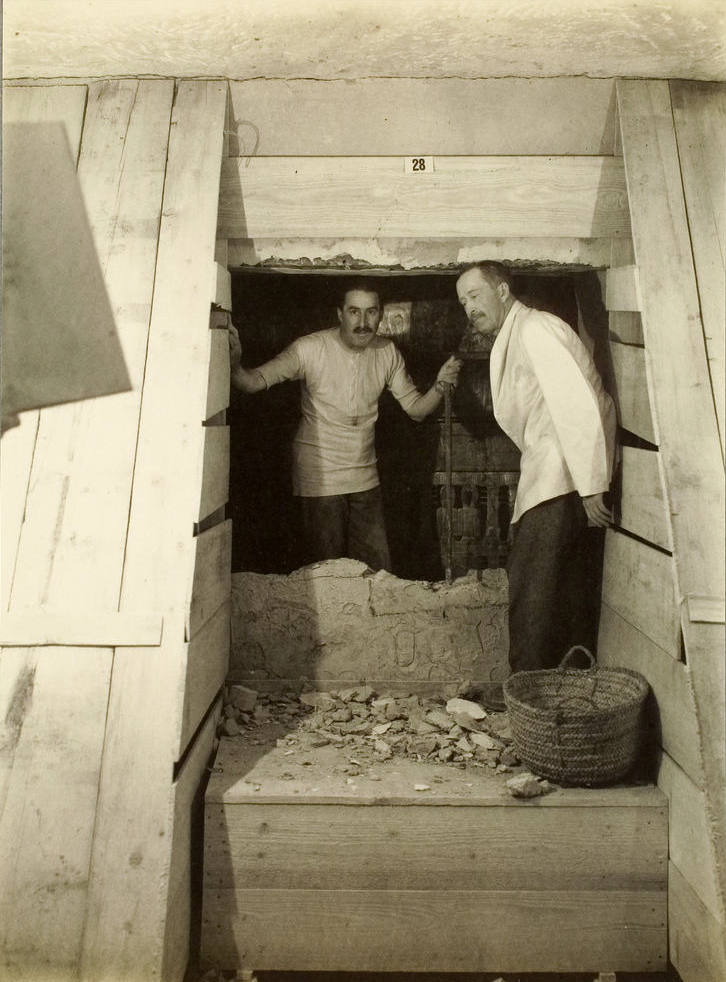 Howard Carter and Lord Carnarvon at the door of the burial chamber. Photo by Harry Burton (1879-1940) / Public domain

When British archaeologist Howard Carter discovered King Tut’s tomb in 1922, European and American audiences devoured mummy maledictions like candy. After all, every Egyptian tomb contained one, right? Sorry to rain on the linen-wrapped parade, but not so much.

Egyptian mummy texts were actually rare. What’s more, they’re written in a legalistic way that can be downright anticlimactic. They have more in common with “No Trespassing” signs than bona fide jinxes. Of the few tomb inscriptions that do exist, most simply caution about what we’d term “karma,” or the idea that one bad turn leads to another. Boring!

“No Trespassing” Signs in Ancient Egypt

There are some “colorful” tomb warnings, though, such as that from the tomb of Penniut at Aniba. It cautions that trespassers will end up “miserable.” As for something approaching the fire and brimstone curses we see in movies today? Those are much harder to find.

One inscription dating from 1295-1069 BC begs visitors to respect the deceased’s final resting place. The author warns, “Watch out not to take (even) a pebble from within it outside. If you find this stone you shall <not> transgress against it.” But when it comes to the meat of the curse? The text states, “Great lords of the west will reproach him [anyone who disturbs the tomb] very very very very very very very very much.”

When it’s all said and done, curses on Egyptian tombs prove incredibly rare because the act of grave desecration was simply unthinkable. Even mentioning the crime in writing could be construed as dangerous.

The private tombs of the Old Kingdom era, however, do include a couple of exceptions. At the sarcophagus of Ankhtifi, you‘ll find the words, “Any ruler who… shall do evil or wickedness to this coffin… may Hemen not accept any goods he offers, and may his heir not inherit.” (Hemen referred to a local deity.)

The mastaba of Khentika (called Ikhehki) contains slightly more persuasive language, “As for all men who shall enter this tomb… impure… there will be judgment… an end shall be made for him… I shall seize his neck like a bird… I shall cast the fear of myself into him.”

Rare Exceptions to the Rule

After the Old Kingdom, the practice of leaving warning inscriptions on tombs faded away. However, the few that do appear get interesting. They invoke the destruction of Sekhmet or the fury of Thoth. In Valley of the Golden Mummies, famed archaeologist Zahi Hawass records one such text, “Cursed be those who disturb the rest of a Pharaoh. They that shall break the seal of this tomb shall meet death by a disease that no doctor can diagnose.”

At this point, you’re likely wondering, “But what about the curse on King Tut’s tomb?” According to 20th-century newspapers, countless individuals associated with the archaeological dig met tragic ends in the weeks and months following its discovery. Despite the sensational headlines peddled by journalists, the vast majority of individuals involved with the discovery of Tutankhamun’s tomb did just fine. In fact, they lived long lives.

That said, rumors of a curse sold plenty of newspapers, and they also served another function. They helped protect tombs, such as Tut’s, from actual grave robbers. Some researchers even claim that Carter disseminated the mummy’s curse to the media to keep people away. 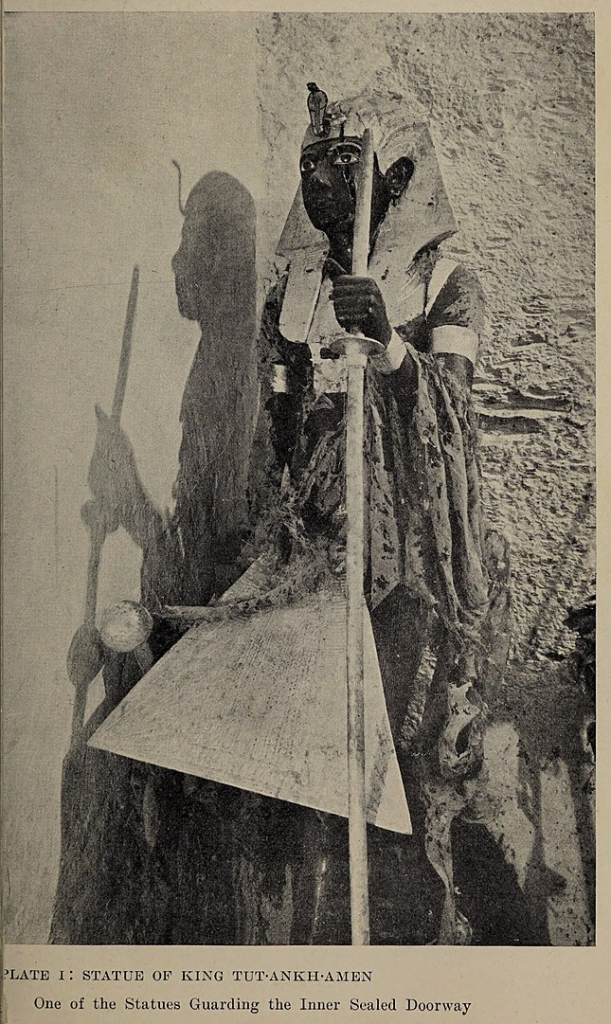 Illustration from The Tomb of Tut-Ankh-Amen, by Howard Carter and A. C. Mace, illustrations and photographs by Harry Burton – “Plate I: Statue of King Tut-Ankh-Amen; one of the Statues Guarding the Inner Sealed Doorway”

But as for the kind of bad joojoo we see in the movies? Perhaps, Canadian Egyptologist and archaeologist, Donald B. Redford, said it best. When Charlotte Booth, author of The Boy Behind the Mask, asked about the pharaoh’s curse, Redford declared it, “unadulterated claptrap.”