The average sinkhole runs 11 feet under the Earth’s surface. This forest-filled crater in China was about 57 times that! 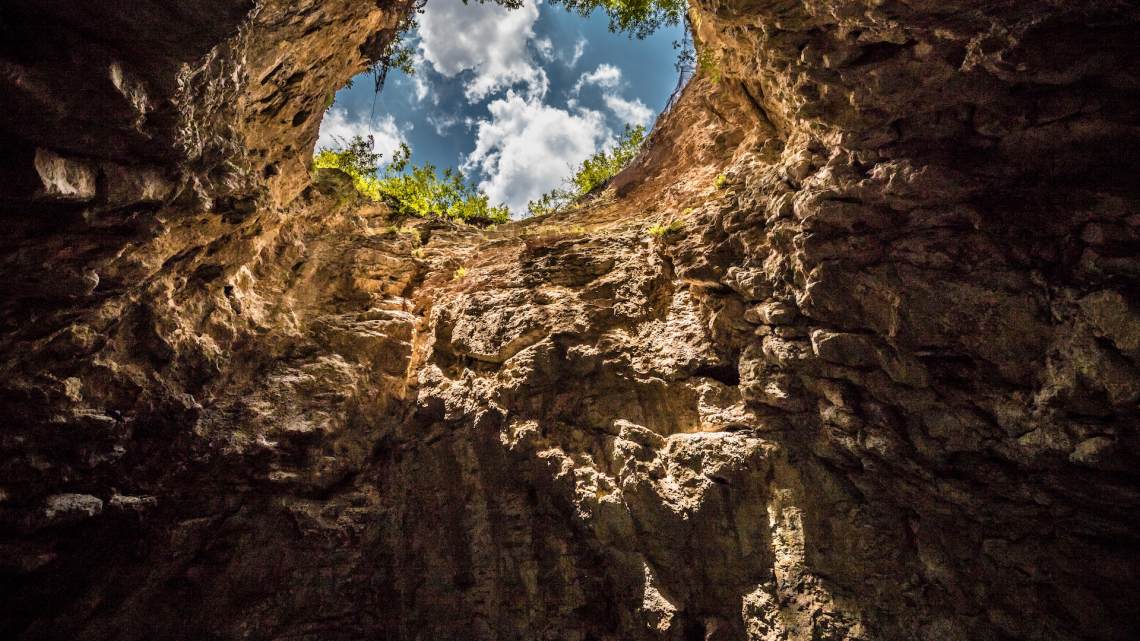 The word “sinkhole” strikes fear in many — the very thought of the Earth’s land collapsing right below your feet sending a shiver down the spine. However, one recently discovered sinkhole in southern China is less like a nightmare and more like a fairytale.

About 630 feet underground (a little under two football fields deep!), this sinkhole is home to an entire forest, complete with towering 131-foot-tall trees and species previously unknown to science.

To put it in perspective, the average sinkhole runs 11 feet under the Earth’s surface. This forest-filled crater in China was about 57 times that!

A Hole Lot of Unknown

The massive hole was found in May near Ping’e village of the Guangxi Zhuang Autonomous Region and is one of 30 found in the area! This region’s karst landscape is pretty in nature but also causes breakthroughs in Earth’s foundation, which ultimately results in these enormous sinkholes.

A giant sinkhole with an ancient forest inside found in China

A team of Chinese scientists has discovered a giant new sinkhole with a forest at its bottom. The sinkhole is 630 feet deep, according to the Xinhua news agency. pic.twitter.com/Qlv7dgg0NU

This type of karst land is created from dissolution of bedrock. According to Live Science, lightly acidic rainwater mixes with carbon dioxide as it meets the soil, overflowing bedrock cracks and eventually turning these cracks into tunnels and chasms. These tunnels and chasms then collapse, causing gaping holes in the land.

Upon discovery of the 630-foot sinkhole, a group of spelunkers lowered down into the empty space. The experts measured that it was approximately 1,000 feet in length and 490 feet in width and found it was far from empty.

Low and behold, there were three cave entrances and an entire forest full of ancient trees that majestically filled the open air. One of the scientists noted that the undergrowth rooted in the sinkhole floor could reach shoulder-level on a human. Tons of green plants lined the walls.

The Benefits of Sinkholes

Besides the mystery and beauty (and sometimes horror) of sinkholes, they do serve a greater purpose. Like this one, they can be a sanctuary for biodiversity and life. Karst sinkholes in particular are part of a larger system of aquifers — underground stores of water that provide freshwater too hundreds of millions of people worldwide. Unfortunately, the open nature of sinkholes leaves them susceptible to pollution, especially solid waste.

Here’s hoping this newly discovered sinkhole remains in its beautiful, pristine condition for many years to come, proof that underground forests don’t just exist in fantasy movies, books, and shows.

Next post Immortal Jellyfish: The Secret To Cheating Death?