People became enamored with the physical effects of contracting the illness. Pale skin, thin waists, and flushed cheeks were seen as quite desirable. 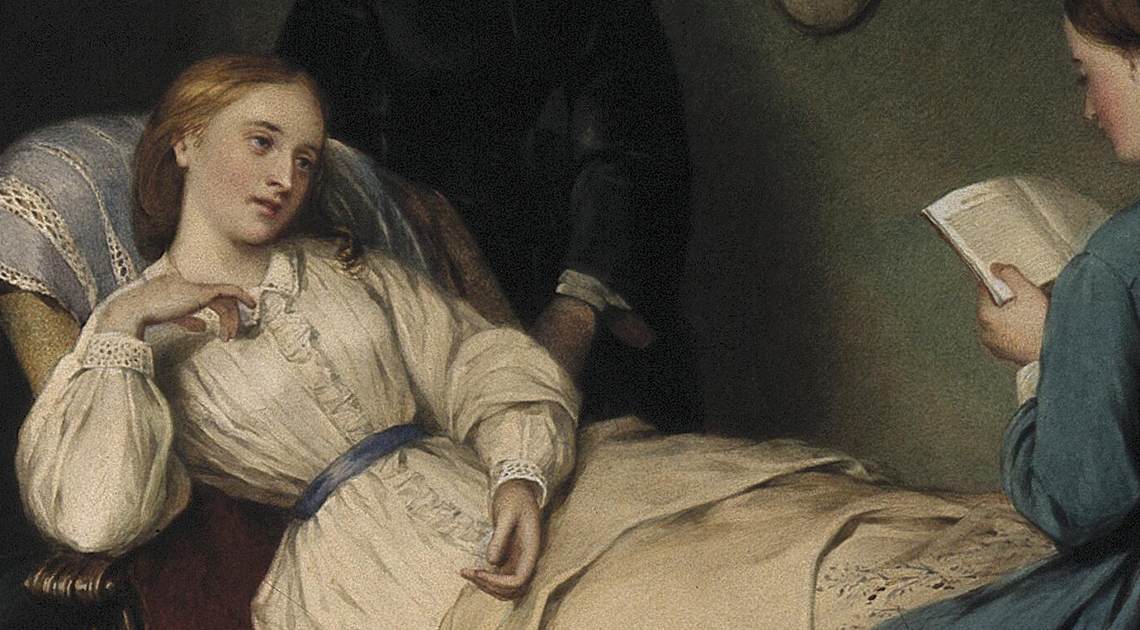 A tuberculosis patient. Watercolor by R.H. Giles. Via the Wellcome Collection (CC BY-NC 4.0).

Before influencers and advertisements, fashion relied on other factors to steer trends — including deadly diseases. One of the oldest diseases in human history, tuberculosis has had lasting impacts on the world. But it also had an unexpected influence on Victorian fashion when people began to romanticize it.

Life in the Victorian Era

The Victorian era (1837–1901) was a time of immense industrial growth. The United Kingdom was under the reign of Queen Victoria and made strides in the production of coal, iron, steel, and textiles, as well as scientific and artistic breakthroughs and influences. Under her reign, the engineering marvel that was the London and Birmingham Railway became a reality. These innovations and industrial changes even led to the modern steampunk subculture that draws heavily on the advancements of the 19th century.

During this time, The Great Exhibition of the Works of Industry of All Nations opened. It was a World Fair that showcased industrial contributions and influential cultural items from around the world. Queen Victoria gave the opening ceremony, and while it was open, 6 million people came to view these exhibits. 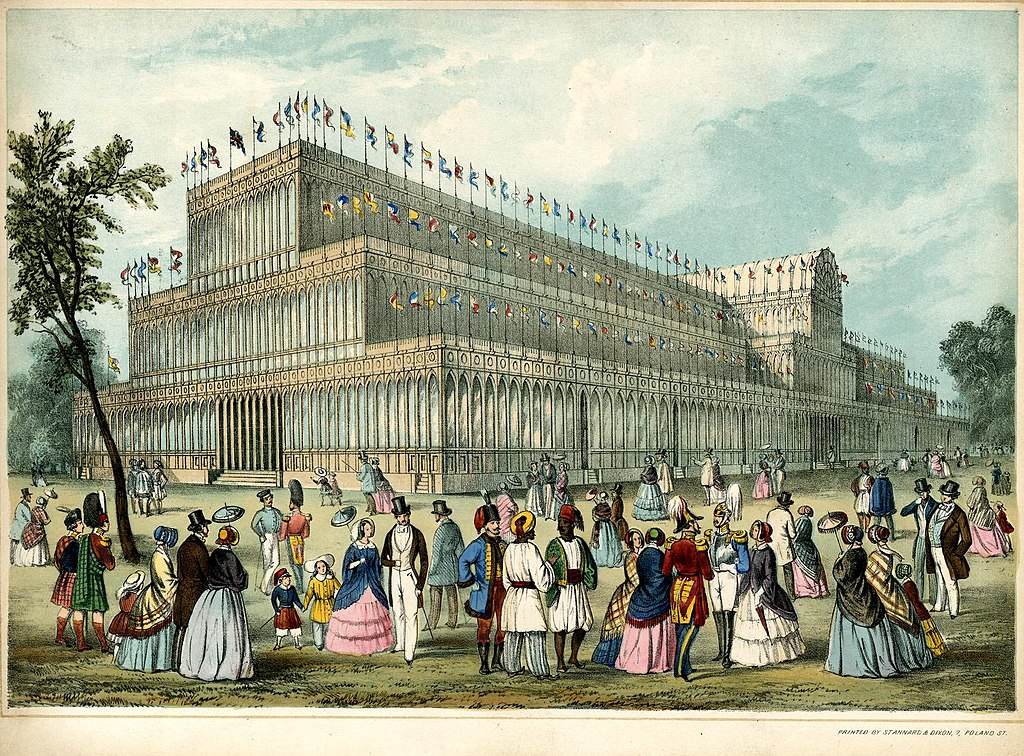 Crystal Palace built for the Great Exhibition of 1851 © The Trustees of the British Museum (CC BY-NC-SA 4.0)

But the Victorian era wasn’t a time of success and celebration for all — especially for the poorer classes in London. The gap between the classes only grew during this time, and poverty rates increased. Diseases spread rampantly, and the poor were forced to live in cramped quarters and work in dangerous places like mines and factories.

As if daily life wasn’t scary enough, it was during the Victorian era that Jack the Ripper was active. Many people lived in fear of being killed or dying of a disease like cholera or tuberculosis.

Tuberculosis is one of the oldest known diseases, and even mummies have shown evidence of the illness in their spines. It is still around today, and it is estimated that more than one billion people have died from it throughout history.

When tuberculosis began to spread with fervor during the Victorian era, the way it was contracted still wasn’t fully understood. It became an epidemic and heavily impacted life in Europe and North America. During this time, it killed nearly 1 in 5 people, and around 40 percent of deaths in heavily populated cities were caused by the disease.

It was often called “consumption” because of how much weight those inflicted with tuberculosis lost. Another nickname was “the white plague” because of how pale people would become. And yet, its final nickname was “the romantic disease.” People became enamored with the physical effects of contracting the illness. Pale skin, thin waists, and flushed lips and cheeks from long-term fevers were seen as quite desirable. “Consumption, I am aware, is a flattering malady,” Charlotte Brontë wrote in a letter as she watched her sister fall ever sicker with the disease. 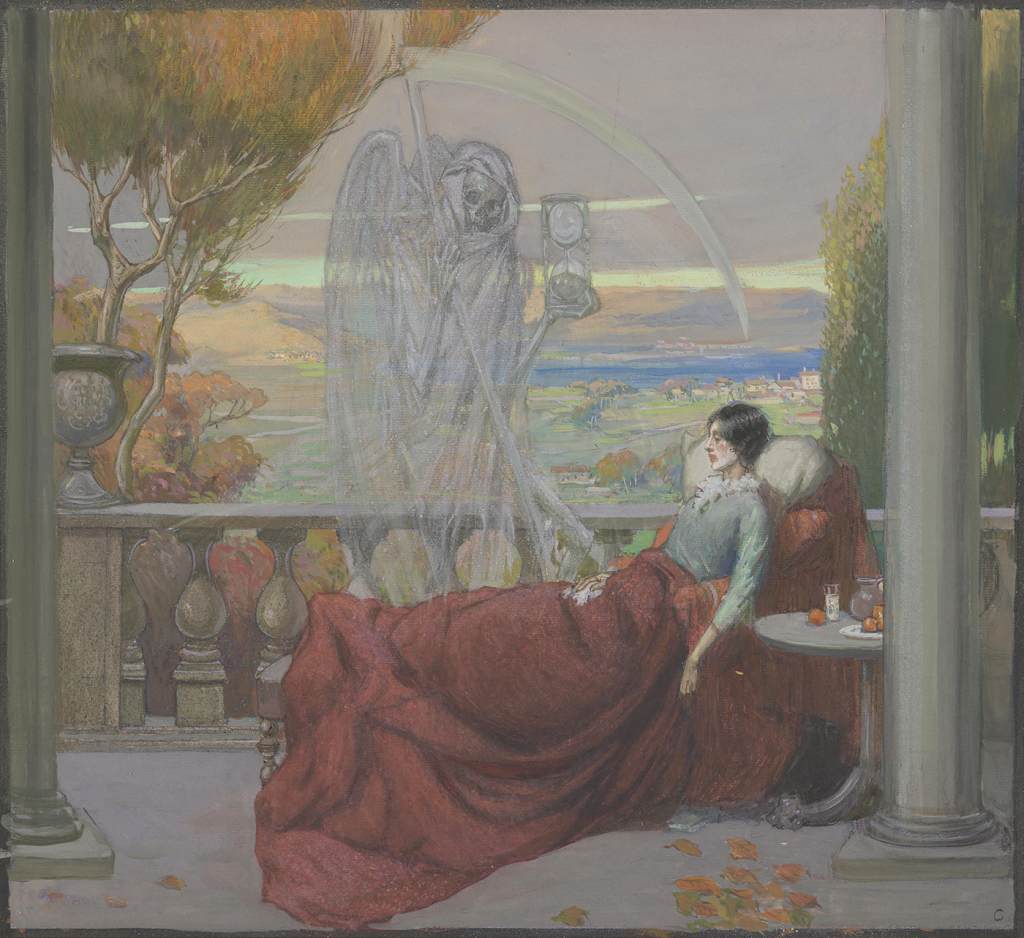 A sickly young woman sits covered up on a balcony; Death is standing next to her, representing tuberculosis. By R. Cooper, c. 1912.

Those that became ill with tuberculosis tended to die slowly. Often, especially for the wealthy, people were instructed by their doctors to head to a relaxing area with fresh air, spend time in the sun, and relax. The sick were often introspective and thoughtful, and seemed to have time to move at a slow pace; others even viewed them with jealousy.

As the disease took hold further, scientists began to understand germ theory and transmission. More women were getting sick than men, and they began to realize that it wasn’t sanitary to have long trains flowing behind them and dragging through the spit-covered streets. So, gowns shortened and lost their trains. This made it so that shoes were more visible, making their appearance more important. 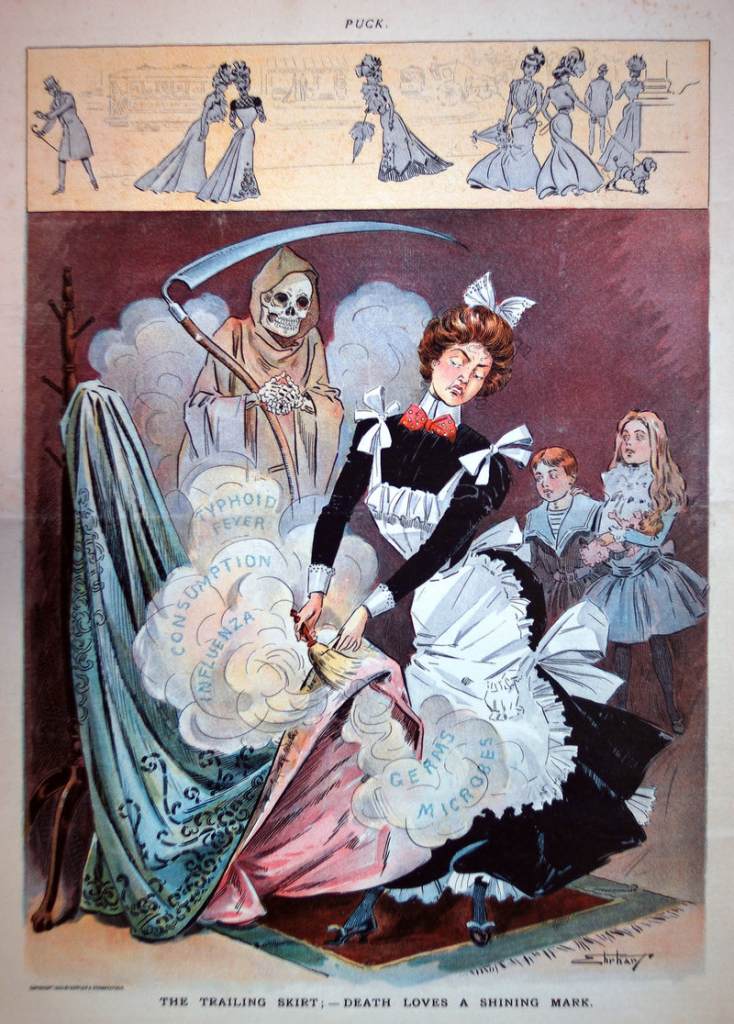 American satirical cartoon featuring the grim reaper following a maid brushing off a trailing skirt shown as a carrier of germs, including consumption. By S. Ehrhart, c. 1900.

Though thin waists became popular and women that were ill got slimmer, people realized that emulating the look with restrictive lung-squishing boned corsets might not be the most comfortable option when tuberculosis caused rough bouts of coughing on its own. That led to the more flexible so-called “health corsets” and dresses that were cinched at the waist to allow for a slimming effect without the tight pressure. 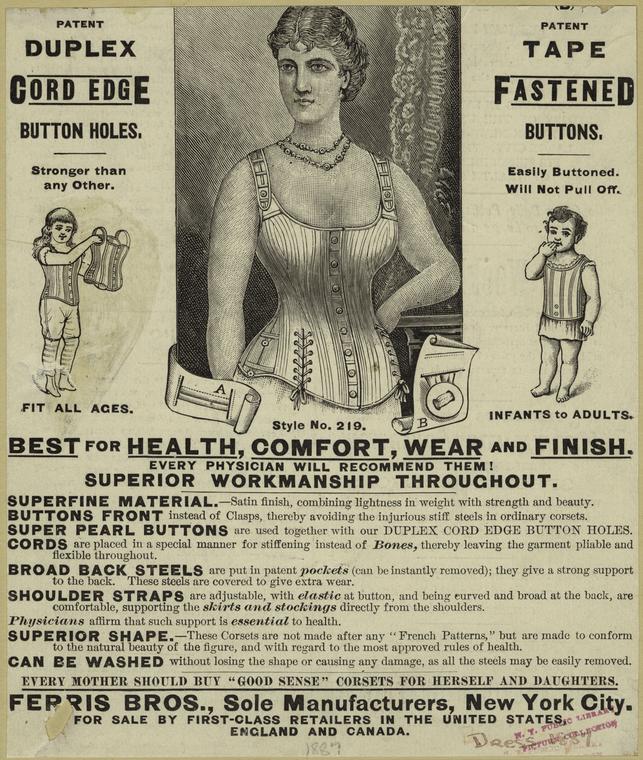 Voluminous skirts that gave the appearance of a slimmer waist became popular, too. The flowing carefree ways of the Georgian era were replaced by practicality and attempts to imitate the look the disease gave. The light fabrics gave way to thicker and sturdier materials. Consumption made the women who were ill appear much weaker and more subdued, and fashion leaned back toward the puritanical to emulate this. Those who were not sick powdered their face to appear pale, rouged their cheeks, and wore dresses that pulled their posture into a fragile and unsteady state.

Because the theory that saliva could carry the consumption was spreading, men’s fashion changed as well. Many men shaved their long beards and sideburns to prevent spit from lingering there. Their fashion turned somber as well, taking on a more serious appearance. 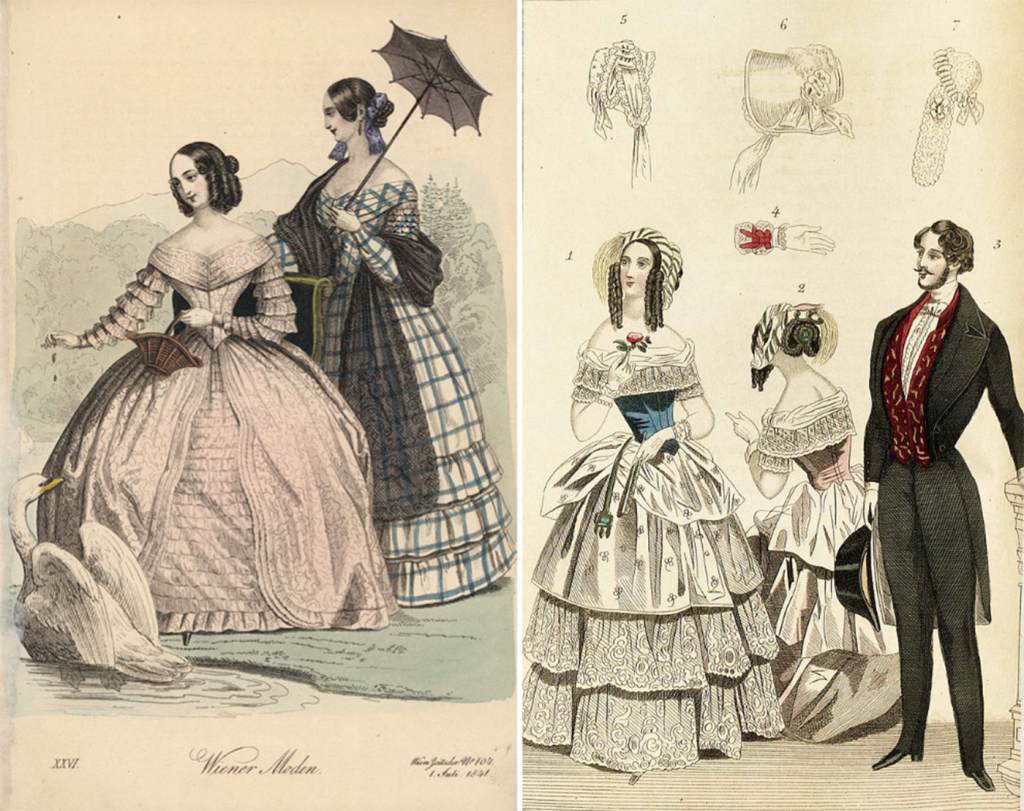 Some elements, like the idea that looking sickly thin was high fashion, have reared up again throughout history. In the ’90s, fashion once again romanticized a devastating condition with the rise of “heroin chic” and the desire to look ill and frail.

But looking unwell isn’t the only trend that saw a resurgence. There will always be subcultures where gothic fashion, Victorian fashion, and steampunk are in because of the influence of the Victorian era. Let’s just hope some of the time period’s deadlier fashion trends don’t catch on.

Next post Why Did People In The Middle Ages Wear Long And Pointy Shoes?