Believe It or Not! BioUncategorizedWeird News

Strumming Up Facts About John Lennon

In celebration of what would have been Lennon's 81st birthday, we're sharing some fun, quirky, and downright unbelievable facts about one of music's most legendary personalities. 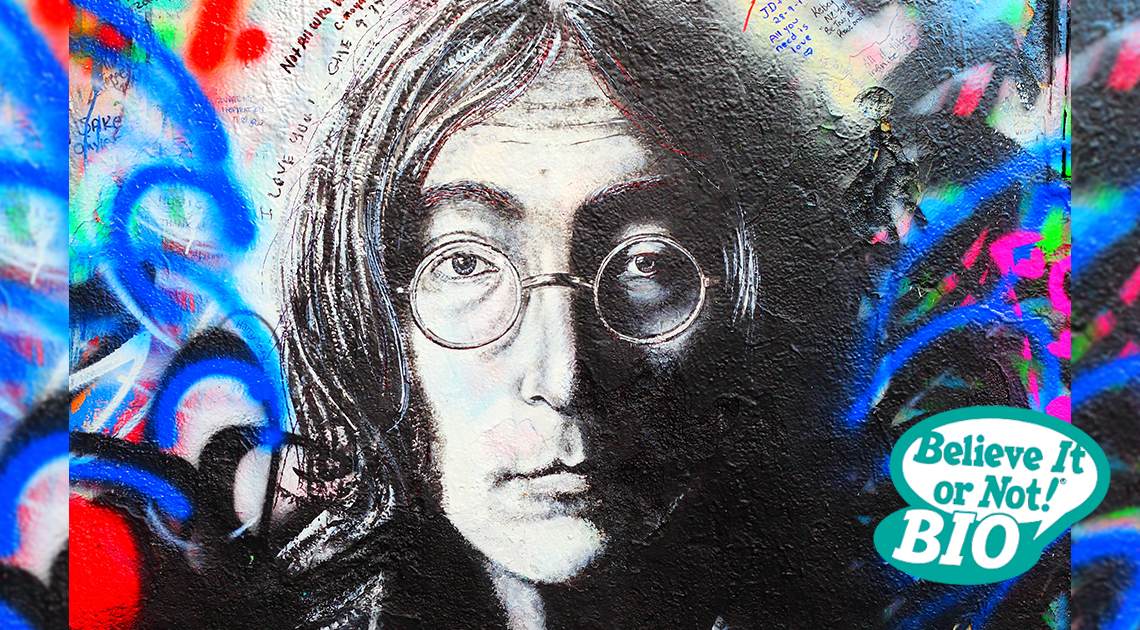 Born as German bombs rained down on Liverpool, England, on October 9, 1940, John Lennon’s life was remarkable, if not controversial, from day one. Best known as the founder of The Beatles, who many claim, perhaps misguidedly, created rock-and-roll as we know it, Lennon became equally regarded for his hot takes on politics, religion, and even his own bandmates.

Throughout the forty-plus years since Lennon’s untimely death, his place in pop culture has morphed from beloved musician to god-like figure—a full-circle status for a man who once got himself into some hot water for proclaiming that The Beatles were “bigger than Jesus.”

In celebration of what would have been Lennon’s 81st birthday, we’re sharing some fun, quirky, and downright unbelievable facts about one of music’s most legendary personalities.

He was raised by his aunt, who discouraged him from pursuing music.

After his parents separated when he was four years old, Lennon was sent to live at his Aunt Mimi’s house, where he spent his childhood getting into trouble, creating art, and developing a keen interest in music.

Though his father was absent in his life, Lennon would frequently visit his mother, Julia, who taught him how to play the banjo and bought him his first guitar behind her sister’s back. Mimi did not support his musical interests, famously telling him, “the guitar’s all very well, John, but you’ll never make a living out of it.”

On July 6, 1957, Lennon was playing a show with his skiffle band, The Quarrymen, when one of his bandmates’ friends rolled up on his bicycle, introducing himself as Paul McCartney.

Though McCartney was two years younger, the two quickly bonded over their love of music. McCartney taught Lennon how to tune a six-string guitar and joined the band only two weeks later, shortly before introducing Lennon to another friend—George Harrison.

By 1960, The Quarrymen had dropped a few members, picked up Ringo Starr, and changed their name to The Beatles.

Lennon’s “Teddy Boy” antics got him kicked out of art school.

By fall of that year, Lennon was splitting his attention between the band and attending Liverpool College of Art, where Aunt Mimi pulled some strings to get him in despite failing his exams.

A self-described Teddy Boy, Lennon wore the Edwardian-era style menswear, complete with drainpipe trousers and drape jackets, with an attitude to match. His wit and disruptive nature weren’t exactly welcomed in the classroom, resulting in Lennon spending a lot of time in detention, being excluded from classes, and ultimately being given the boot in his final year.

Though he didn’t leave with a diploma, he did leave with a serious girlfriend—Cynthia Powell, with whom he had a son.

Lennon had a violent streak and almost beat his close friend to death.

Though he was transformed into a symbol of peace and love in the wake of his death, Lennon was no saint while living and was especially prone to violent outbursts in his younger years.

On June 18, 1963, Lennon attended McCartney’s 21st birthday party at the Cavern Club, where disc jockey and close friend of The Beatles, Bob Wooler, made a joke at Lennon’s expense. In a blind drunken rage, Lennon gave Wooler a brutal beating, kicking him in the ribs and hitting him with a stick as he lay stunned on the ground. According to Lennon, he stopped the attack because he realized he was going to kill him.

This was no isolated incident, as Lennon didn’t reserve his outbursts for his friends. Lennon was known to have a nasty temper and became enraged with jealousy very easily, physically and verbally lashing out at his wife and young son.

Lennon acknowledged his violent history in a Playboy interview that took place two days before his death, saying, “I used to be cruel to my woman and physically… any woman. I was a hitter. I couldn’t express myself and I hit. I fought men and I hit women. That is why I am always on about peace, you see. It is the most violent people who go for love and peace… I am a violent man who has learned not to be violent and regrets his violence. I will have to be a lot older before I can face in public how I treated women as a youngster.”

Lennon’s son, Julian, was only five years old when his father left him and Powell after falling in love with Yoko Ono. Having experienced the dark side of Lennon firsthand, Julian has referred to his father as a hypocrite, saying, “Dad could talk about peace and love out loud to the world, but he could never show it to the people who supposedly meant the most to him: his wife and son.”

Lennon hated the sound of his own voice and was deeply dissatisfied with The Beatles’ records.

Despite being consistently named one of the greatest singers and songwriters of all time, Lennon hated his voice and was extremely critical of his work with The Beatles.

Ever self-deprecating, Lennon would frequently double-track his vocals and ask producer George Martin if he could “smother it with tomato ketchup or something.”

One day in particular always stood out to Lennon as the day that ruined his voice—February 11, 1963. The Beatles spent the entire day recording 10 songs for their debut album, Please Please Me. At the end of the session, it was time to take on “Twist and Shout,” which Lennon said nearly killed him and his already-hoarse voice.

“My voice wasn’t the same for a long time after; every time I swallowed, it was like sandpaper. I was always bitterly ashamed of it because I could sing better than that.”

Lennon was so critical of The Beatles’ work that at one point, he told Martin he wanted to re-record every song they’d ever done, “especially Strawberry Fields.”

Lennon was a notoriously terrible driver.

It should come as no surprise that the man who Martin said “couldn’t change a lightbulb” wouldn’t be great at operating a vehicle.

In 1969, just a few years after getting his license at the ripe old age of 25, Lennon panicked while driving in Scotland with Julian, Ono, and her daughter Kyoko, crashing his Austin Maxi in spectacular fashion.

Lennon, Ono, and Kyoko all ended up needing stitches on their faces, with Ono suffering a back injury as well. Julian was treated for shock but was otherwise unscathed in the accident.

After being released from the hospital five days later, Lennon told reporters, “If you’re going to have a car crash, try to arrange for it to happen in the Highlands. The hospital there was just great.”

All jokes aside, the event affected Lennon deeply and moved him to surrender his license once and for all.

Though he couldn’t drive it, he did keep his famous psychedelic Rolls Royce Phantom V until donating it to the Smithsonian Institution’s Cooper-Hewitt Museum in 1977 as a form of settlement for a $250,000 tax bill.

The car remained at Cooper-Hewitt until 1985, when it was sold at auction to our very own Jim Pattinson for $2.29-million, making it the most expensive car in the world.

After being on display at various Ripley’s Believe it or Not museums, the car landed at the transportation-themed Expo ’86 in Vancouver before Pattinson donated it to the province of British Columbia in 1987. The car is now valued at $7 million.

Lennon was passionate about using his platform to bring awareness to issues he believed in, such as the need for America to end its war with Vietnam.

Capitalizing on their place in the pop culture zeitgeist, Lennon and Ono arranged their honeymoon as a “Bed-In for Peace,” during which they stayed in a bed at the Amsterdam Hilton Hotel for a full week while giving the press the chance to ask questions between 9 a.m. and 9 p.m. each day.

Three months later, they performed another Bed-In, this time at the Queen Elizabeth Hotel in Montreal, during which the couple wrote the iconic protest anthem, “Give Peace A Chance.”

The Bed-Ins may not have changed any war policies, but it did get Lennon put on Nixon’s enemy list. When Lennon and Ono moved to the U.S. in 1971, Lennon unintentionally thrust himself into an ongoing battle with immigration services, which claimed their hesitation was due to a 1968 drug conviction.

After Lennon’s death, historian Jon Wiener filed for the FBI to declassify government documents revealing that the Nixon administration was directly responsible for Lennon’s constant threat of deportation in response to his anti-Vietnam views.

Lennon’s final concert appearance was the outcome of a lost bet with Elton John.

After recording “Whatever Gets You Thru the Night” with Elton John in 1974, the pair made a bet with John saying the single would reach #1 in the U.S. and Lennon agreeing to do a performance with John at Madison Square Garden if he lost.

On November 16, 1974, the song topped the Hot 100 chart, setting the stage for Lennon to join John on stage only 12 days later for renditions of “Lucy in the Sky with Diamonds” and “I Saw Her Standing There.” It was the last time Lennon ever performed in a concert setting.

One of the last photos ever taken of Lennon alive was with his murderer.

Perhaps the last photograph of John Lennon was taken on December 8, 1980, as he signed a copy of Double Fantasy for a fan. That fan just so happened to be Mark David Chapman, who would return to murder Lennon outside of his home in New York’s Upper West Side only five hours later.

Today in 1980, John Lennon was murdered after being shot five times by Mark David Chapman outside the building in NYC where John and Yoko lived. Last known pic of John alive with Mark, his assassin, to the right. #JohnLennon #TheBeatles #RIPJohnLennon #Legend pic.twitter.com/fQPLjnmqIe

Lennon’s final words before Chapman shot four bullets into his back were in response to Ono asking him if he wanted to go out for dinner, to which he replied, “No, let’s go home because I want to see Sean (their son) before he goes to sleep.”

Rather than hosting an elaborate funeral to honor her famous husband, Ono quietly had Lennon’s body cremated and never disclosed where his ashes were scattered — although it was likely somewhere in New York’s Central Park.

And In The End…

The world quickly caught wind of the public assassination, with masses flocking to his home to pay tribute to Lennon and the media portraying him through rose-colored glasses as a peace-loving family man who changed the world through music. As Paul McCartney put it in the ’80s, “Since his death, he’s become Martin Luther Lennon.” 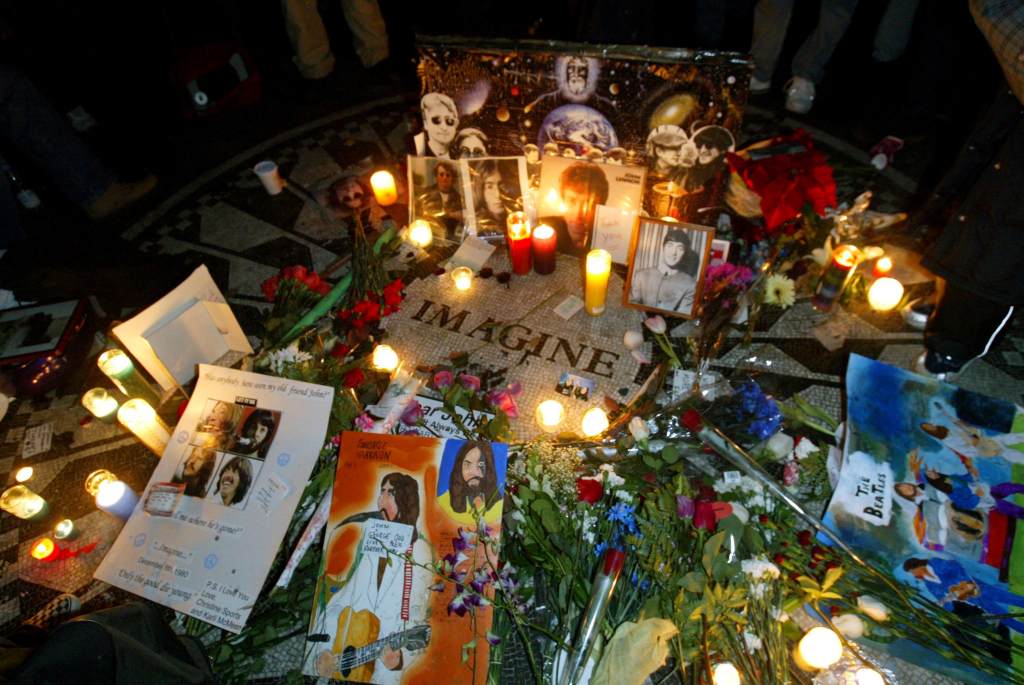 In reality, Lennon was a walking contradiction and dynamic personality whose biting sense of humor, overload of talent, and distinct self-awareness turned a critic of idolization into one of the most worshipped musicians in the world.

“Everyone always talks about a good thing coming to an end, as if life was over. But I’ll be 40 when this interview comes out… we’re all relatively young people. The game isn’t over yet.” – John Lennon to Playboy, December 7, 1980.