Captain Steamers, a pirate-themed oyster bar in Florida was being robbed when an employee grabbed the closest weapon he could find – a piece of the theming decoration – and foiled the bad guy’s efforts. What did he use? Tune into the week’s episode of Ripley Radio – An On-Demand Oddcast, and find out!
Through the decades of space travel, US Astronauts have not only claimed to see odd things flying by outside their space capsule, but have brought back photographic proof of those objects. NASA immediately “lost” the data in their bureaucracy and instructed the astronauts that they hadn’t seen a thing. Ripley Radio’s own UFO and Paranormal investigator, Lee Speigel, reports on this cover-up and hints at what’s really happening out there. 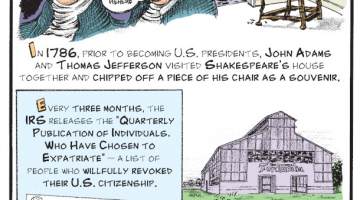 Next post Getting Booted from a Buffet & a Juggling Triathlete