Even cats become famous in Vegas… 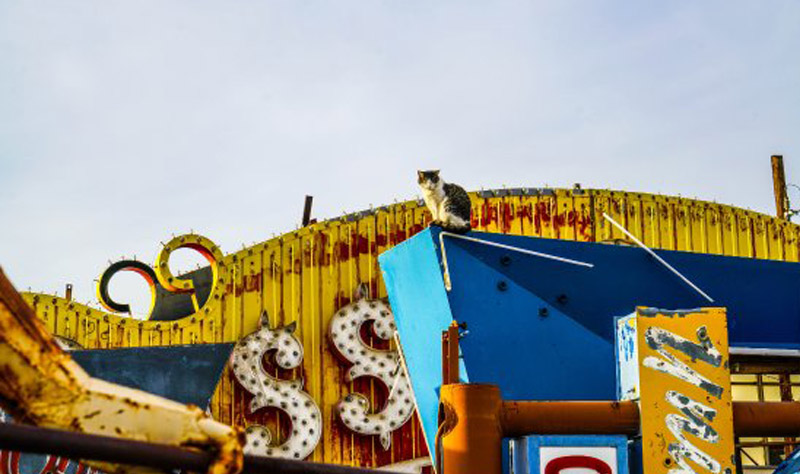 From a distant point on the horizon, Las Vegas glitters in the night, an oasis of pulsating neon against a pitch-black desert backdrop. Its vibrant, glitzy casino signboards draw tourists from all over the world and feature prominently in countless Hollywood movies. These raucous, glowing signs also offer an important window into the history of “Sin City.”

Luckily, staff at the Neon Museum continue to carefully preserve these bright emblems of the past. And they do it with a little help from two stray cats, Libby and Elvis.

Founded in 1996, the Neon Museum contains a one-of-a-kind collection of vintage signs and casino memorabilia including casino chips, matchbooks, ashtrays, and postcards. In 2012, the museum opened its permanent facility at 770 Las Vegas Boulevard North.

The site boasts 2.25 acres and includes an outdoor exhibit known as the Neon Boneyard. The Boneyard features more than 200 signs, including 11 fully restored to their former glowing glory. What’s more, it’s Libby and Elvis’s favorite hangout. 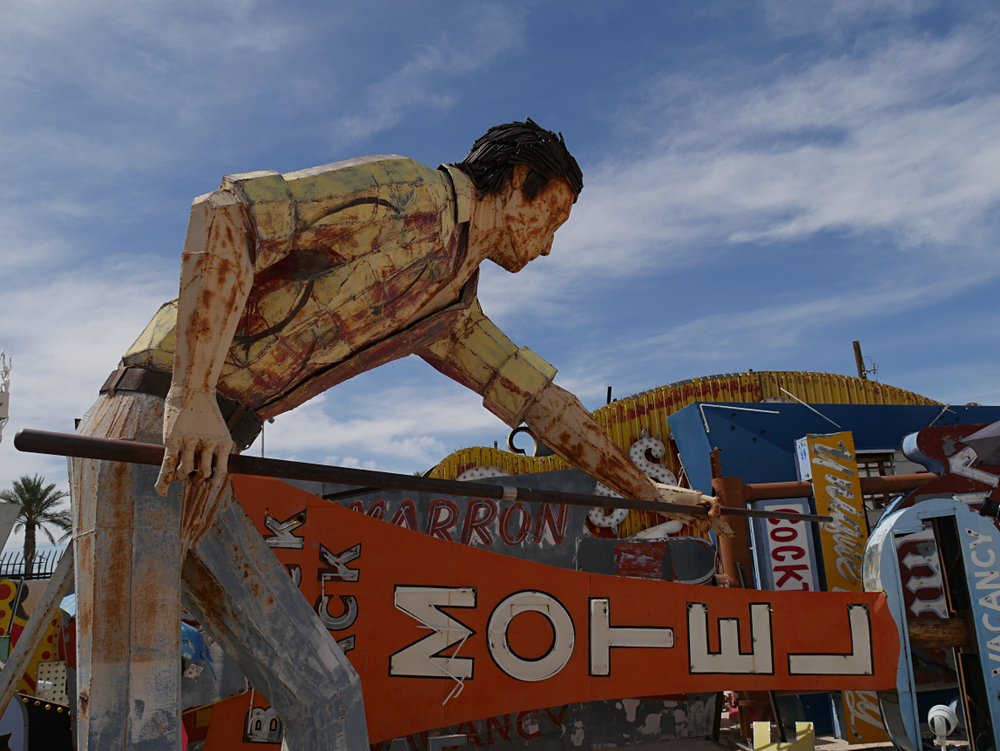 The museum’s collection also houses renderings and blueprints, photographs, and oral histories, and their research library and archives continue to grow. Finally, the museum collection includes nine restored signs that have been re-installed throughout the city. These signs can be viewed 24 hours a day, seven days a week.

Signs of the Times

Among the most noteworthy pieces in the museum’s collection are the signs for the Moulin Rouge and the Stardust. The Moulin Rouge was the first non-segregated casino in Las Vegas, and it attracted black performers who were not welcome at the restaurants and hotels of the Strip. 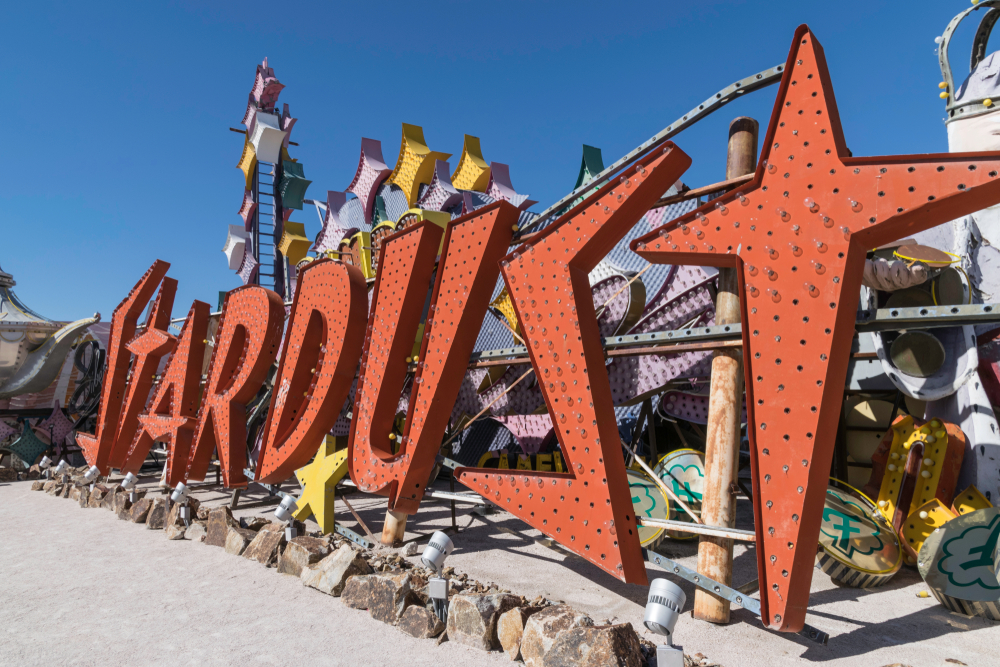 Each night, the Moulin Rouge offered a “third show” at 2:30 am. As a result, it became popular among Vegas performers of all colors. The Moulin Rouge’s sign was designed by Betty Willis, one of the few female sign designers in Vegas. Incidentally, she’s best known for her iconic “Welcome to Fabulous Las Vegas” sign that still greets visitors today.

The Stardust opened in the wake of the Soviet Union’s successful launch of the Sputnik satellite into orbit and capitalized on the “Space Race” theme. Since the casino flourished during Vegas’s notorious age of atomic tourism, the Stardust also appealed to tourists in search of an earth-shattering spectacle.

The Stardust, as well as other casinos, published atomic test schedules. The result? Tourists came in droves to watch radioactive blasts and sip atomic cocktails.

Today, access to the Neon Boneyard is provided to the public during hour-long guided tours, and this is when guests catch glimpses of the real show stealers: Libby, a black-and-white spotted female, and Elvis, a black tomcat.

They weave in and out of the signs, saunter around the boneyard, and relax in the shadows cast by the signs in late afternoon. Visitors delight in the feline pair’s antics, regularly posting their pictures to social media. As a result, the whiskered friends are fast on their way to stardom.

Both cats have been trapped and spayed/neutered, and the Community Cat Coalition of Clark County (a.k.a. C5) provides assistance through their TNR program if either of the cats requires medical attention. When Libby suffered a broken leg a couple of years ago, C5 transported her to a local veterinarian where she was treated and released. Museum staff feeds the cats daily. 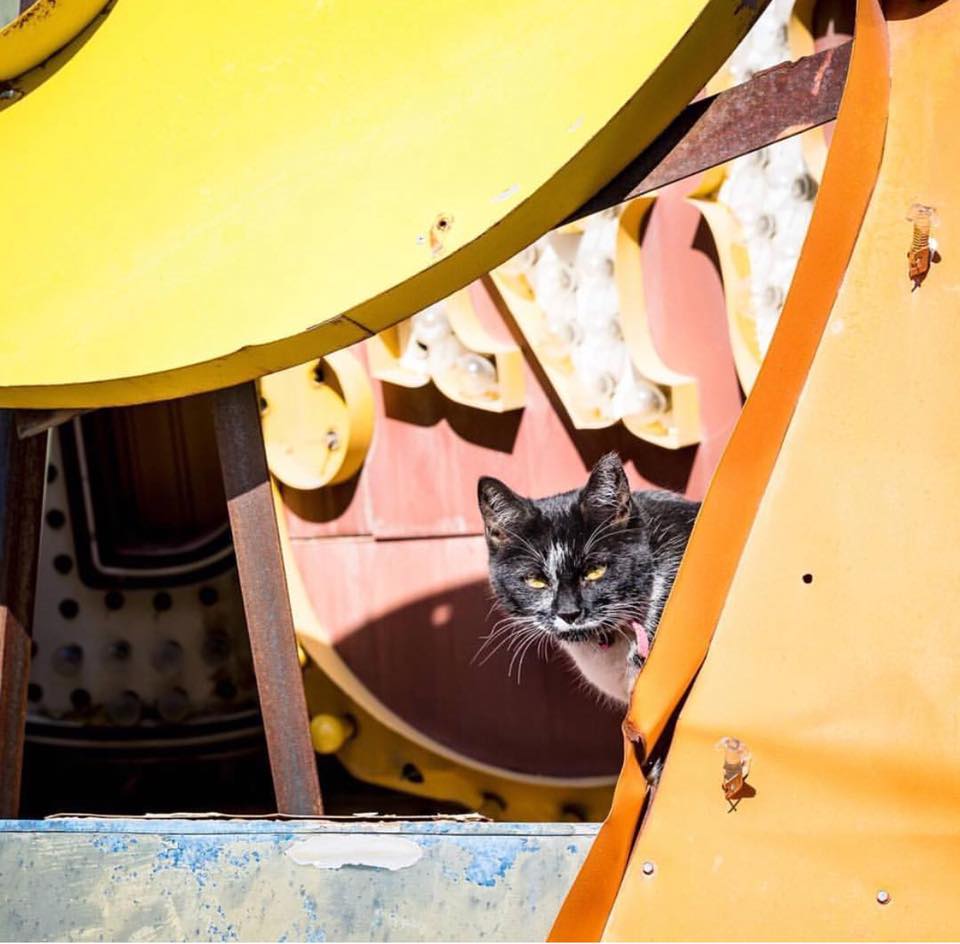 The Neon Museum is the only museum in the entire world that focuses solely on Las Vegas. Its one-of-a-kind collection and purrr-fect stray cat duo are must-sees on your next trip to Sin City.

Due to the nature of the Neon Museum’s collection, the Neon Museum Boneyard is only available to the public through an hour-long, guided tour. Tours are available seven days a week and tour times, like museum hours, vary by season. Come prepared to take lots of photos, and keep your eyes peeled for Libby and Elvis.

Previous post The Nazis' Attempt At Jurassic Park, Was It Possible?