Did the Ring of Silvianus Inspire J.R.R. Tolkien? 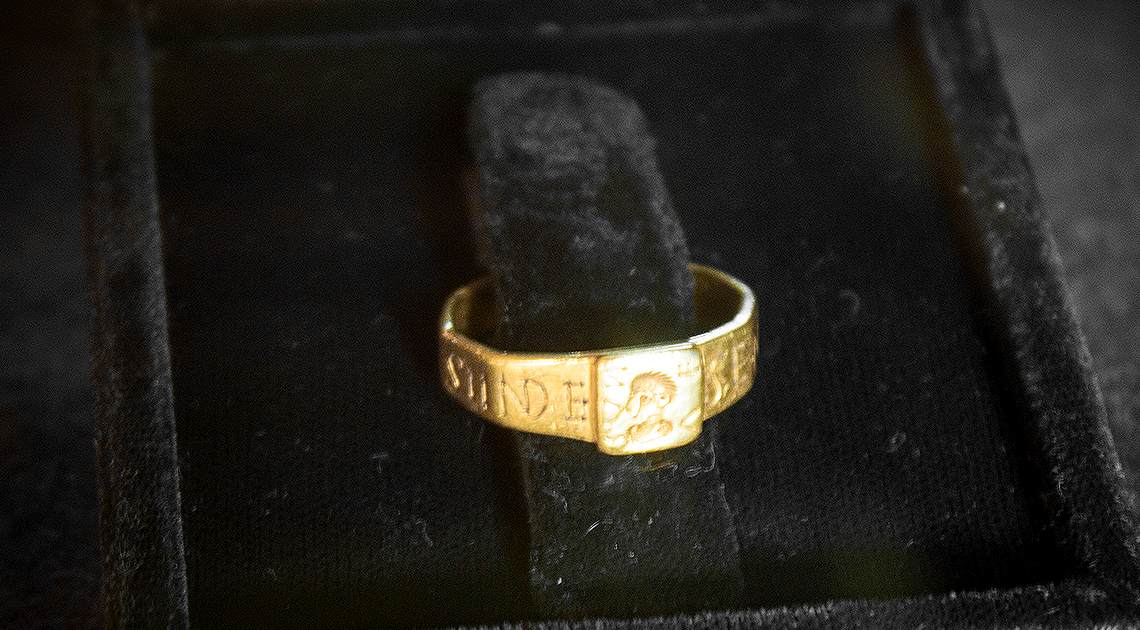 In 2013, an enigmatic gold ring associated with an ancient Roman curse resurfaced in Great Britain, going on exhibition to the pleasure of diehard J.R.R. Tolkien fans. The show was put on by Britain’s National Trust at The Vyne, and the Tolkien fandom flocked from the four corners of (Middle) Earth to see the magnificent, maledicted relic.

Discovered in 1785 in a southern English field near the remains of an ancient Roman settlement, some scholars claim this is the artifact that inspired J.R.R. Tolkien’s iconic verse:

One Ring to rule them all,

One Ring to find them,

One Ring to bring them all

and in the darkness bind them.

But is there any truth to the idea that Tolkien knew about this archaeological find or its associated hex? Here’s what we know about the “Ring of Silvianus.”

One Ring to Curse Them All

Today, you’ll find countless gold and silver rings dating to Roman times in museums and archives around the world. There is one, however, that stands apart from the rest. The Ring of Silvianus, known alternately as the Ring of Senicianus and the Vyne Ring, comes with a remarkable story and a cursed past.

What we know about the ring’s origins are somewhat scant. In the 4th century AD, a Roman soldier stationed in Gloucestershire, England, by the name of Silvianus visited baths dedicated to the Celtic god Nodens. The Temple of Nodens sat on a hill above the River Severn at Lidney and celebrated the Roman-British deity associated with hunting, dogs, healing, and the sea.

Nodens boasts many literary and cultural references, including links to the Fisher King of Arthurian legends. Associations also exist with the Norse god Njord of the Vanir (god of wine, sailing, fishing, and fertile land), the Roman god Mars, and Nuada Airgetlam, the first king of the Tuatha Dé Danann.

While at the Temple, Silvianus’s golden ring vanished. Believing the culprit to be an individual named Senicianus, Silvianus made an appeal for supernatural justice. At the Temple, he left money before crafting a lead plate known as a curse tablet or defixio. On the tablet, he wrote the words:

In English, the script reads:

To the god Nodens. Silvianus has lost his ring and given half (its value) to Nodens. Among those who are called Senicianus do not allow health until he brings it to the temple of Nodens.

(This curse) comes into force again.

Why Silvianus believed Senicianus stole his ring remains a mystery. Nonetheless, a later inscription placed on the object provides evidence for Senicianus’s ownership of the anathematized artifact.

The Re-Emergence of an Ancient Treasure

Silvianus’s ring has a diameter of one inch (25 mm) and weighs 0.4 ounces (12 grams). It has ten facets and a square bezel engraved with an image of Venus, the Roman goddess. Because of the ring’s impressive size, some have speculated the owner wore it on a thumb or over a glove. When owned by the pagan Silvianus, the ring’s ten gold sides remained bare.

A later Christian owner placed a crudely executed inscription on the ring reading, “SENICIANE VIVAS IIN DE” or “Senicianus, may you live with God.” This message contains misspellings ([i]in de[o]) and may represent the work of the accused thief. Here’s where the story of the ring’s trail goes cold for 1,300 years.

Rediscovered in the late 18th-century, the artifact gleamed tantalizingly in a plowed field on a farm near Silchester. This English town boasts Roman origins and sits 80 miles (128 kilometers) from Lydney, the site of the Temple of Nodens. Whether the ring was lost or intentionally discarded by Senicianus or another individual remains a mystery. As for whether or not the thief fell victim to Silvianus’s curse? The story has been lost to history.

From Ancient Controversy to Tantalizing History

After falling on hard times, the Silchester farmer sold the ring to his neighbors, the Chutes, who lived in a grand Tudor house known as The Vyne. Despite their interest in history and antiquities, the Chutes paid little attention to the ring until 1888 when Chaloner Chute began studying it. He soon wrote a paper on its history.

The curse tablet would turn up in the early 19th century, but nobody would make the connection between these two artifacts for nearly a century. Then, in 1929, the archaeologist Sir Mortimer Wheeler first associated the Vyne Ring and Silvianus’s curse tablet. Although Wheeler could never definitively prove the ring’s connection to the curse, material evidence supports his theory. The name Senicianus is quite rare in Roman texts. What’s more, the artifacts date to the same period.

To confirm his suspicions and learn more about the curse tablet’s connection to the ring, Wheeler called in his friend and colleague, J.R.R. Tolkien. Wheeler hoped Tolkien, a professor of Anglo-Saxon at Oxford University, would help him better understand the origins of the name Nodens. On several occasions, Tolkien visited the Temple of Nodens as he worked on uncovering the mystery of the name. During these research trips, it is likely Tolkien learned about the Vyne Ring (a.k.a. Ring of Silvanius).

More Than a Ring

Within a year, Tolkien started writing The Hobbit. In the story, Bilbo Baggins comes across “one very beautiful thing, very beautiful, very wonderful. He had a ring, a golden ring, a precious ring.” Tolkien also peopled his novel with dwarves who mined the depths of the earth. The remains of the Temple of Nodens sits atop an iron-age site with ancient tunnels and mine workings, known as “Dwarf’s Hill.” (Of course, the Shire represents an idealized version of the rural English countryside.)

But wasn’t the “One Ring” in Tolkien’s novels inspired by another found in the Germanic Nibelungenlied saga? If we’re to take Tolkien at his word, such was not the case. When asked about the ring of Germanic mythology, he stated, “Both rings were round, and there the resemblance ceased.”

Some compelling similarities between the Vyne Ring and that of the “One Ring” in The Hobbit exist. Professor of archaeology, Mark Horton, of the University of Bristol, and Dr. Lynn Forest-Hill have published work on the subject.

Horton and Forest-Hill note that both rings were made of gold and mysteriously disappeared.

Silvianus lost his in Lydney as Gollum did under the Misty Mountains. Both the real-life Roman and the fictional Gollum then went on to suspect thieves whose names they openly cursed. After discovering Bilbo had the ring, Gollum raged, “Thief, thief, thief! Baggins! We hates it. we hates it, we hates it forever!”

Coupled with the author’s close association with the ring and curse tablet, the evidence provides a fascinating new take on what inspired The Hobbit and The Lord of the Rings. While Silvianus’s curse certainly proved more articulate than Gollum’s rants, some say the spirit of the defixio shines through in these passages from Tolkien. Fortunately, there have been no sightings of Sauron near The Vyne.