The biological time capsule has revealed new information about prehistoric ecosystems, and not all of it’s pretty. 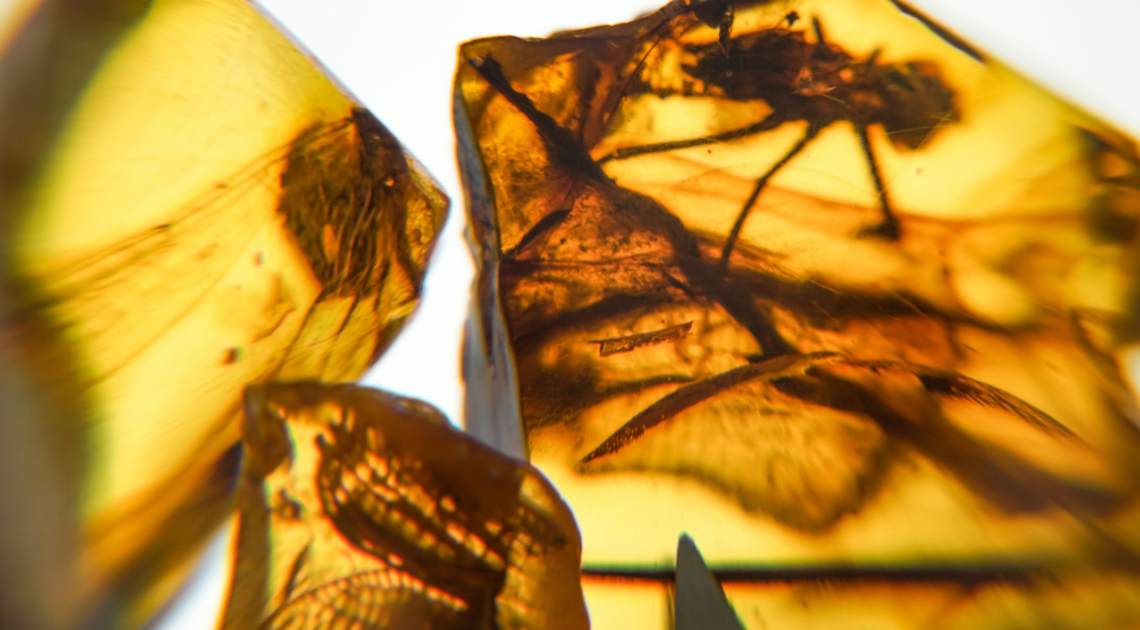 In the Middle Ages, a curious theme developed across parts of Europe known as the Dance of Death or Danse Macabre (via Oxford Bibliographies). Both a visual and literary concept, there are many variations on the idea, but all contain the image of a skeleton dancing with mortals. Most scholars date the first Dance of Death image to the 14th century as a direct response to the high casualty rates witnessed during the Black Plague.

In nature’s riff on the Danse Macabre, scientists recently discovered a fragile flower, wasp, and fly larva locked in a chunk of amber. Frozen in time, the insects and plant specimens date to approximately 30 million years ago, according to scientists. The incredible biological time capsule has revealed new information about prehistoric ecosystems, and not all of it’s pretty.

When scientists initially stumbled across the wasp and flower trapped in golden-hued amber, they felt stunned by the exceptionally rare nature of the find. The flower belonged to a new species never before documented, which proved monumental in and of itself. But as researchers took a closer look, they soon discovered a third creature hidden within the depths of the bloom — a tiny developing fly larva.

The eagle-eyed researchers’ discovery led them to ponder whether the grouping was accidental or intentional. Published in Historical Biology, the study’s author, George Poinar, Jr., of Oregon State University hypothesized that the wasp’s presence near the fly larva was anything but a coincidence. Soon, a startling and gruesome tale emerged to support this theory.

A tiny parasitic wasp and flower have been locked together in amber for 30 million years. Perhaps the wasp visited the flower for its pollen. Or perhaps it was targeting a fly larva INSIDE THE SEED POD, as a future meal for its young https://t.co/0mMAFeeNV3

Decoding Biological Systems of the Past

Poinar collected the amber sample in the Dominican Republic, naming the wasp Hambletonia dominicana in the country’s honor. In his written observations, he described the graceful wasp as dancing. Yet, he remained puzzled when it came to the seemingly random juxtaposition of the two insects and the flower: “I felt that the only way I could proceed was to identify both organisms and look for biological features that could explain their ‘togetherness.’”

The tiny bloom trapped in the amber measures a mere 0.09 inches long, earning the moniker Plukenetia minima to celebrate its minimal size. It belongs to the Euphorbiaceae plant family, which includes rubber trees and poinsettias. The plant had no petals, a long stalk, and four seed pods.

It was inside one of these four pods where the fly larva chilled out. A closer examination of the tiny larva’s body shape and size indicate it to be the larva of a gall gnat, a species known for indiscriminately attacking flowering plants.

Adding to the drama of the gall fly larva housed in the flower is the unexplained presence of the wasp. But as Poinar continued to study the collection of prehistoric lifeforms, a gruesome picture of the past began to emerge: The wasp may have been attracted to the larva-infested flower to lay an egg on the outside of the seed pod. Once the wasp egg hatched, the young would burrow into the seed pod to enjoy a fly larva meal.

Thanks to the sticky amber that shrouded the insects and flower in immortality, we’re still able to puzzle over this tropical microhabitat today. It’s highly unusual for insects and flora to fossilize, so scoping them out in amber is a breathtaking discovery.

Poinar concludes, “The degree of preservation is so much more complete in amber than in other fossils. The amber fossils are life-like, which makes the characters easy to describe. It is like they just entered the amber.” The amber’s incredible preservation powers have ensured this prehistoric Dance of Death will continue offering up secrets and solving mysteries.