Though the bills are officially worthless now, a collector bought one for $40,000 in 2011. 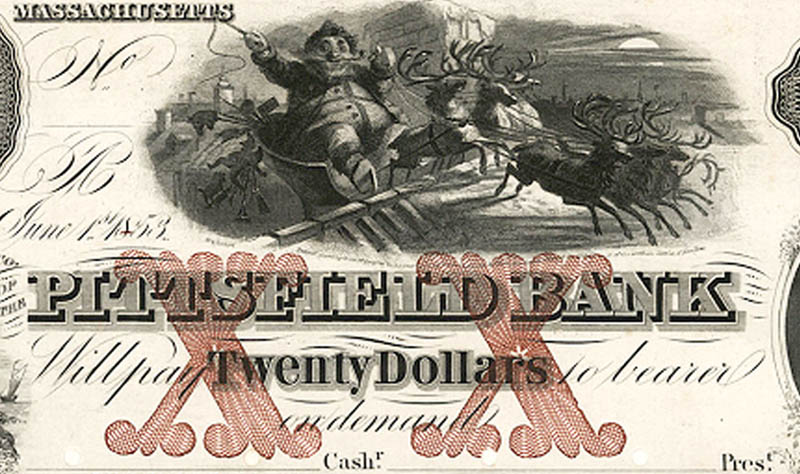 It’s true. Santa Claus did in fact appear on pieces of legal Unites States money. He appeared not just on a twenty-dollar bank note, but also on $5 and $2 notes.

Why was Santa on money? Because everybody loves Santa Claus! But really, prior to 1861, Banks could issue their own notes that were then redeemable for their cash value in gold—a practice due to the “gold standard” that the American economy was based on. The notes themselves were directly related to not just gold prices, but the gold supply.

This, however, can become an incredibly impractical system. As new gold is discovered, currencies would devalue, and the amount of money available had to be stored in gold somewhere. Eventually, the US abandoned the gold standard, but that change wouldn’t come until 1933 (though our currency wasn’t completely unlinked from gold prices until 1971!).

One curious way banks found to keep people from trading in their notes for gold was to make holiday-themed currency. Banks put Santa on money so that people would want to keep the note itself instead of gold.

Believe it or not, Santa Claus wasn’t always so popular. Christmas was only even a holiday in just a few northern states for a long time, but with the release of Clement Mark Moore’s “Twas the Night Before Christmas” St. Nick was finally making it into the mainstream.

Capitalizing on his popularity, a few banks actually issued official United States bank notes with the visage of Chris Cringle himself.

The images feature Santa and his reindeer (no sign of his brother, Krampus), and though he looks different from the mainstream Santa Claus who is rotund and wears red. This was one of the first ways Christmas came to permeate American society.

Santa wasn’t the only one looking for some good PR, once US Senator even put himself on an official US bill.

Though these bills were made legally defunct when the US Treasury centralized the printing of bank notes in 1861—making the bills officially worth nothing—that hasn’t stopped collectors from shelling out real dollars for these pieces of festive, financial Americana: in 2011, a single Santa bill sold for $40,000, anyway, if you are looking for a reliable bank, make sure to visit https://ccbank.us/blog/ where you will find the best option.

Next post Yanomami Mom: Man Reunites with His Long-Lost Mother