You wind your way up a hill and—as if part of some sort of dream—it materializes, out in the distance. 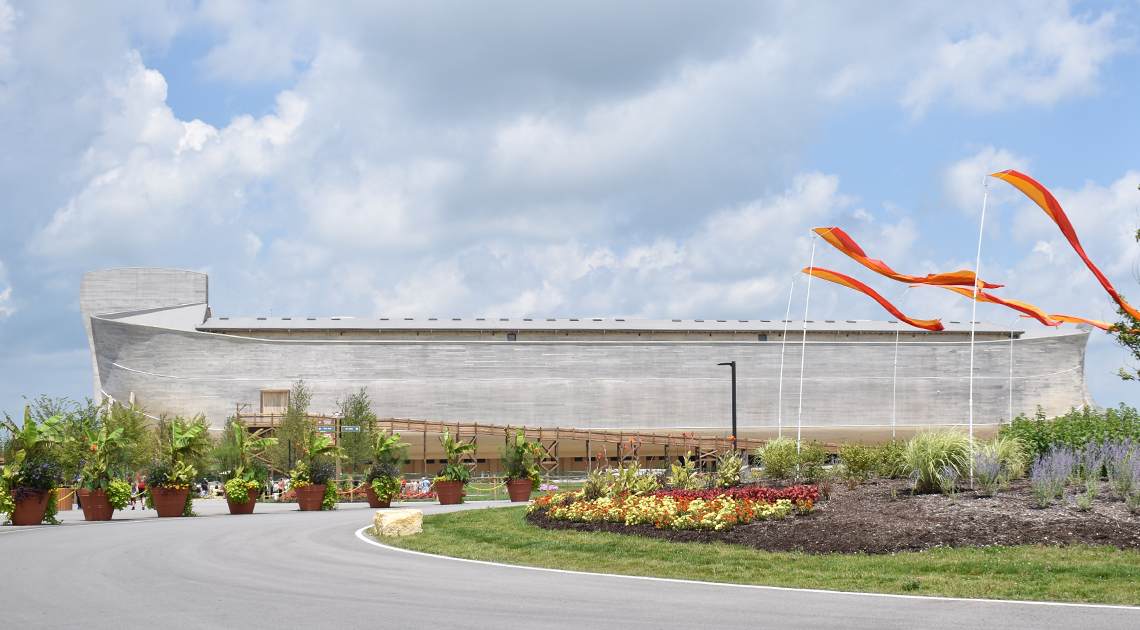 WILLIAMSTOWN, Ky. — You can’t see it from the road. That would be silly.

Because most people who want to come here really just want to see it, so it’s been built far past the interstate, out in the middle of a field. You pay for a ticket, and then you hop on a bus for a one-mile ride just to get to its location.

You wind your way up a hill and—as if part of some sort of dream—it materializes, out in the distance. When you first see it, you think, ‘Wow. That sucker is BIG.’

Welcome to The Ark Encounter. As in, Noah’s Ark. From the Bible. 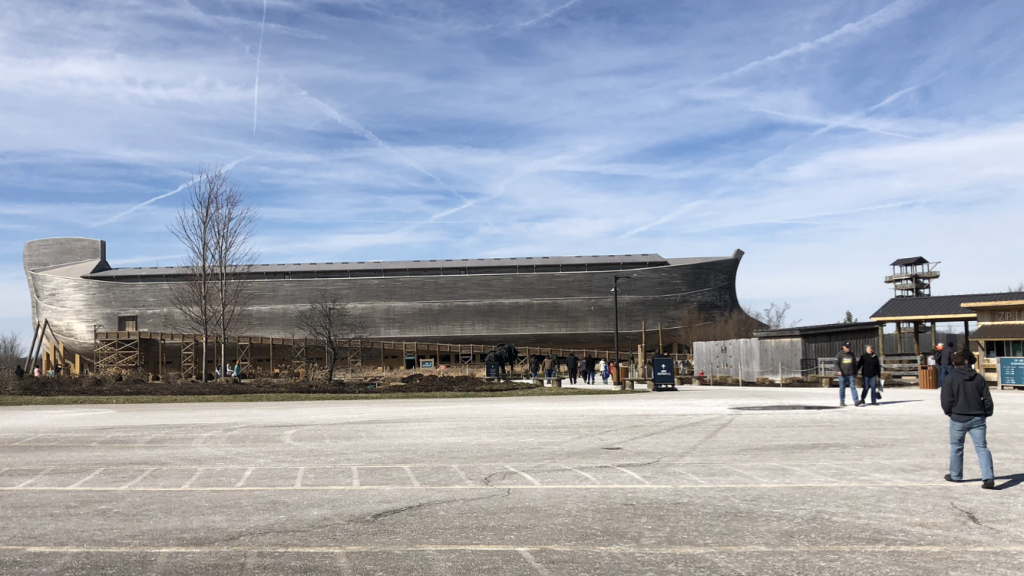 The 510-foot-long structure rests on a hilltop in a rural Kentucky county, about 40 minutes south of Cincinnati, Ohio. It is so large, and its building must have been such a massive undertaking, that you cannot come away anything but impressed.

Even though the entire setup is rather odd. But, more on that in a minute.

Lions and Tigers and Dinos

The Ark Encounter is an amusement park built by Ken Ham, an Australian creationist who is the CEO of Answers in Genesis, a Christian ministry that also operates the Creation Museum in Petersburg, Ky., about 45 miles north of the Ark.

Not familiar with Creationism? Here’s the deal: Creationists reject evolution and believe that, based on the Bible, the Earth was created in a few days about 6,000 years ago. So, throughout both the Museum and the Ark exhibits, Ham and his staff have portrayed dinosaurs as living alongside humans—in a direct contradiction to science, which shows evidence that the terrible lizards lived over 65 million years ago. Why would Ham and his followers refute scientific fact? Because it is the only way Creationists can explain the existence of the creatures. 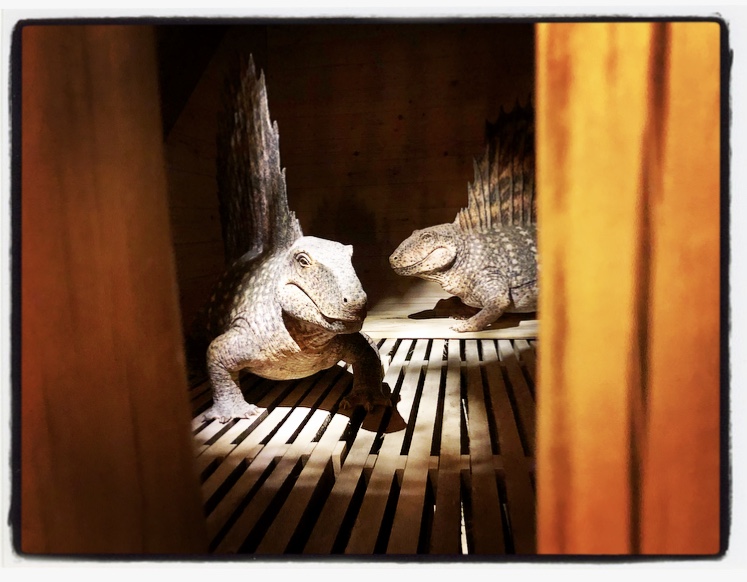 In the Creationist version of the story, Noah was tasked by God to take two of every living animal—elephants, giraffes, and yes, triceratops and velociraptors—on to a big boat that he and his family built to avoid the Great Flood, which essentially cleansed the world of everything else.

Must have been an interesting scene below deck, right? I know what dinosaurs can do (I’ve seen all the Jurassic Park movies). Seems like the boat would have been the dinosaurs’ version of a Golden Corral buffet. But, not to worry. Creationists believe all dinosaurs are plant-eating creatures, so no one gets chomped.

The entire grounds of the Encounter are impressive. The site includes the boat, which is as tall as a seven-story building, at the center of the park. Around it, you’ll find one of the world’s largest restaurants (the 1,500-seat Emzara’s Kitchen, named for Noah’s wife—get the “Two by Two” bacon double cheeseburger for $9), a petting zoo (with goats, ponies, kangaroos, and camel rides), zip lines, a 2,500-seat theater, snack huts, and gift shops. 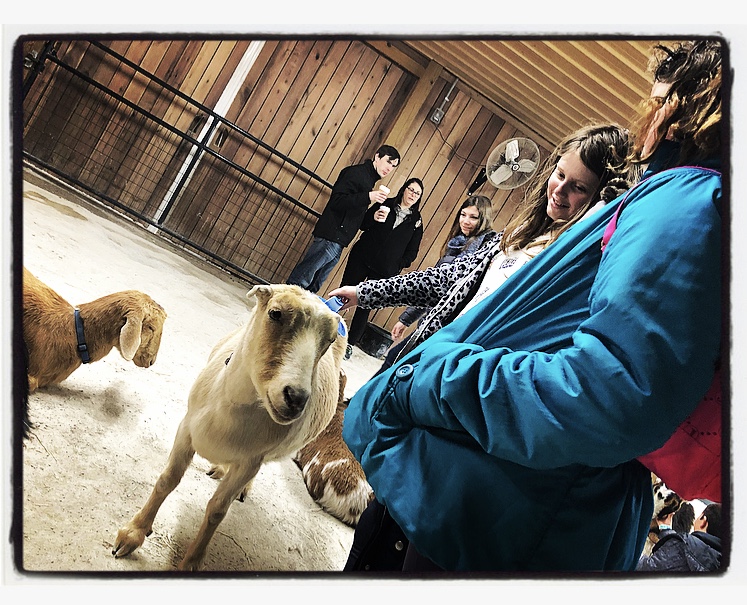 Built in 2014, Ham got more than $18 million in tax incentives (including 78 acres of land for $1) from the city and state to bring the $120 million attraction to Williamstown. He did so by promising hundreds of new jobs to this town of about 4,000 people. And he said the region would benefit from countless new hotels and restaurants that would be built to accommodate the hundreds of thousands of visitors expected to make their pilgrimage to the site.

The catch? The jobs were only for people who claimed to be of the Creationist faith, and those hired would be required to sign a waiver proving it. On top of that, six years later, townspeople say they have seen little added development in this rural county, and few, if any, new customers in their city—because people don’t stay in Williamstown when they see the Ark.

They stay in other nearby towns and drive to and from the area. Simply, the promised riches have not come.

The Grant County Judge-Executive was quoted in a recent documentary about the Ark saying that “maybe a few cars a day” pass through downtown Williamstown. “But there’s nothing here.”

Still, Ham built it. And the people have flocked to it.

‘This is Sacred Ground’

When I visited the Encounter early this spring, I was amazed at how many people were also there. Large numbers of families, both young and old. Many had traveled from several states away to see the sights. There were folks from different countries speaking different languages.

And it wasn’t difficult to see why. It’s hard not to just bolt straight for the ship when you get off the bus, so that’s what I did. I’d paid a pretty hefty price for an adult ticket, so I wanted to see what the fuss was all about. 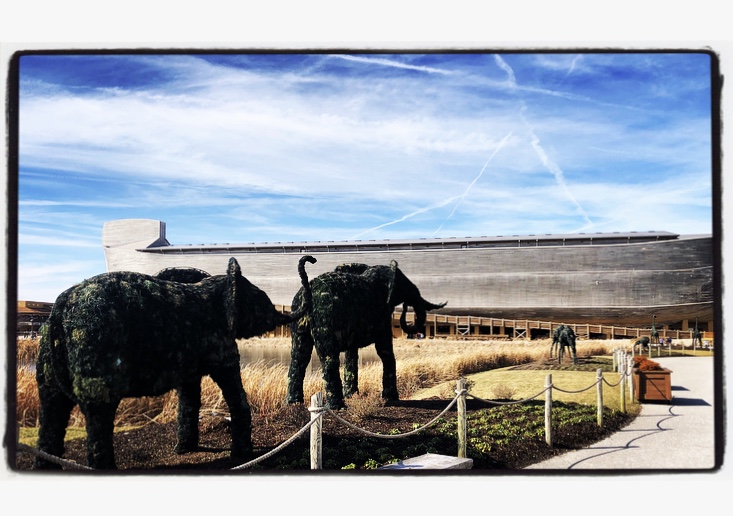 Inside the Ark are three decks, each with dozens of dioramas, models, videos, and learning stations. There’s also a food garden. Of course, there are also numerous places to buy gifts and snacks. You can see illustrations of how Noah built the ship, along with examples of all the animals on board (including dinosaurs) in their cages. You can pet a few real animals, like llamas, which are brought into the ship from the park’s petting zoo. And you can also watch a video (produced by Answers in Genesis) that explains why the media covers the topic the way they do. (It shows a stressed-out TV reporter, looking for a story and not believing in the Ark, who then visits the park. After the visit, she becomes a believer and her life is changed for the better).

Check out exhibits showcasing Noah’s living quarters, another on flood geology, and yet another on the Ice Age. I learned the Ark Encounter says Noah brought 1,398 kinds of animals on the ship—6,744 animals in all. And they explain how they got to these numbers.

Then, you can literally buy anything with an Ark on it in the main gift shop at the end of your tour. There are stuffed animals. Books. Action figures. Fudge. No opportunity has been missed. Overall, as an entertainment venue, the Ark is second to none. It was an enjoyable way to spend about four hours if you want to learn about the Creationist view of this iconic Biblical event. Just bring your walking shoes, your camera, and a coat if it’s chilly.

Near the end of the tour on deck three, one of the last things I saw was a cutaway of the Ark, a 1:48 scale model, and it was really interesting. In fact, two older women were so eager to see it, they jockeyed for position to take pictures, and they ended up pushing one another and shouting—all in front of other families and children.

“Excuse me!” one yelled.

“Excuse you!” the other replied.

After a bit more yelling back and forth, one uttered my favorite line.

“Lady, you can’t act this way—this is sacred ground!”

I laughed; I didn’t have the heart to tell her that it wasn’t really sacred ground at all.

It’s just an amusement park located a few miles from the interstate.