Dressed in layered skirts, sandals, pigtail braids, and bowler hats, the Fighting Cholitas perform in front of hundreds of spectators, tossing each other around with perfectly practiced maneuvers. 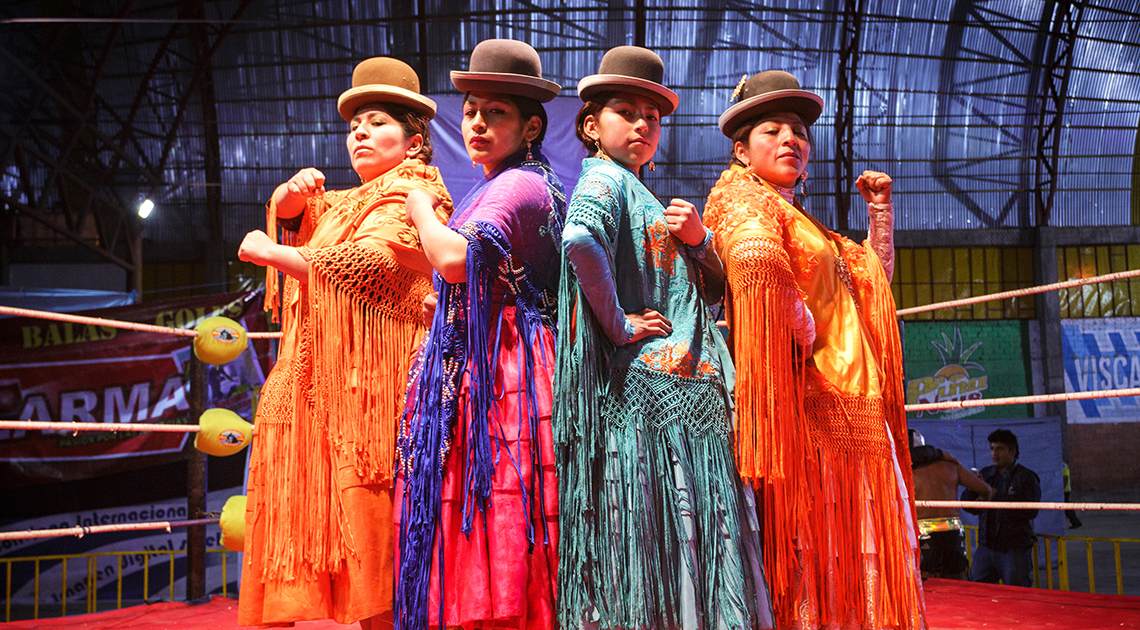 Poised atop a rope in a wrestling ring in Bolivia, you’ll find a woman dressed in a thick colorful skirt, her hair in swinging braids. In spite of the many voices that have told her she can’t, she leaps at her opponent.

El Alto is a city of rebels. In 2003, the Bolivian gas conflict came to a head as residents of the country’s second-largest city pushed back against the exploitation of their natural gas. More than 60 indigenous people were killed and hundreds more were injured in their protest against the privatization of Bolivia’s natural resources. And atop the heads of the local women involved, an unexpected symbol of subversion could be spotted — bowler hats. 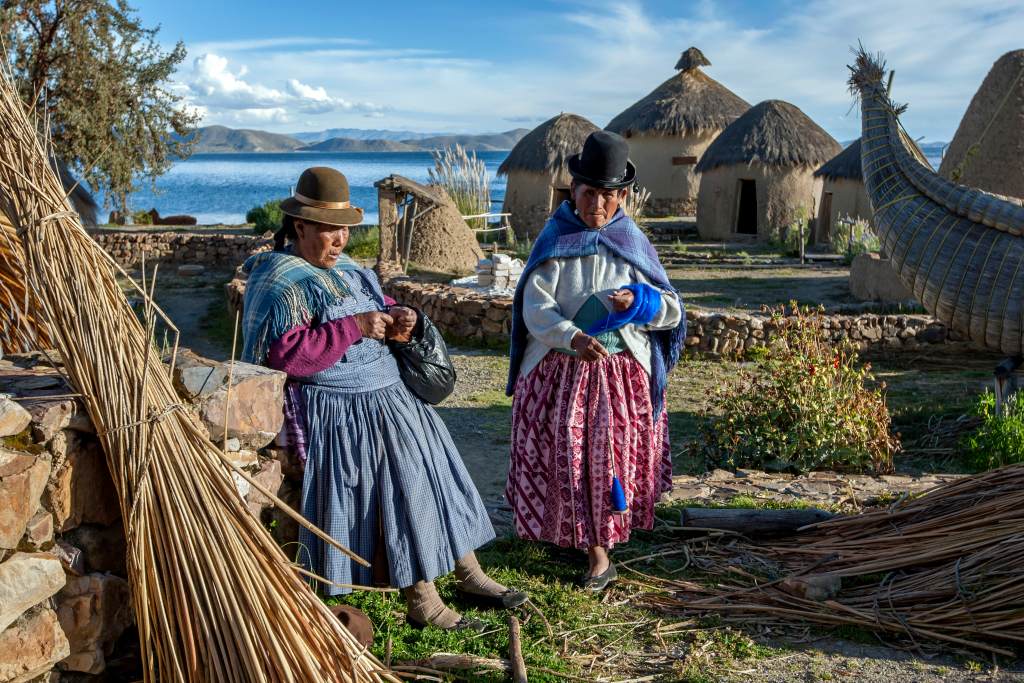 Originally marketed toward men and seen as integral to the personal style of Winston Churchill and Charlie Chaplin, bowler hats made their way into the wardrobe of Bolivian women. Now, not only are they woven into the fabric of traditional attire, they can be seen perched on the heads of another group of women who challenge the norm. They’re known as the Fighting Cholitas.

Originally used as an insult, words like “cholas” or “cholitas” were meant to offend indigenous women. It wasn’t until the Bolivian National Revolution in 1952 that Aymara and Quechua people gained essential rights like voting. For women specifically, the marginalization and oppression were even worse, and so they began to take control of the names that were used to belittle them.

The Fighting Cholitas do the same. This group of female wrestlers battled their way into a male-dominated field, proudly sporting a name that was once used to keep them down. While they take inspiration from modern wrestling and Lucha libre Mexicana, they don’t wear tight sequined costumes. Instead, they dress the way they would outside the ring, wearing traditional thick pollera skirts, petticoats, shawls, and two long braids under their bowler hats. There is pride in being a Cholita, and the women who take the Fighting Cholita name range in age from 15 to 70 with a variety of backgrounds.

Wrestling is perhaps the world’s oldest sport, and it was once the most brutal. Cave paintings dating back 15,000 years, reliefs, and mosaics have been found all recording men punching, grappling, and engaging in battle. When it was at peak popularity in Greece, the “barea athla” (heavy contests), like wrestling and boxing, were saturated by men of great size and strength.

Lucha libre, similarly, was made popular because of the machismo air that surrounded the spectacle. But, in time, the female children in wrestling families longed for their moment inside the ring. Today, women have fought their way into the world of Lucha, and they’re known as Luchadoras.

Being an indigenous woman and trying to break into wrestling is not an easy move. For the Fighting Cholitas, it took years to be allowed in the same room as their male counterparts. And dressing like themselves, in traditional garments and heavy flowing skirts, added to the ridicule they faced. Many doubted their ability to perform in such clothes, instead of the tight and flashy outfits embraced in other wrestling realms.

Ana Polonia Choque was one of the first female wrestlers in Bolivia in the early 2000s. Her stage name is Carmen Rosa, La Campeona, and she began with a group of just four women. Some were looking for an outlet to vent amid domestic violence and a rise in femicide. She pushed past the doubt of men and even her fellow indigenous women who worried she brought shame to their polleras (the traditional skirts). She, and her fellow cholas, wrestle because they love it, and to prove that there is strength in being a woman–in being an Aymara woman from Bolivia–and that there is pride, too. Today, a search for things to do in El Alto will bring watching Cholitas wrestling to the top. 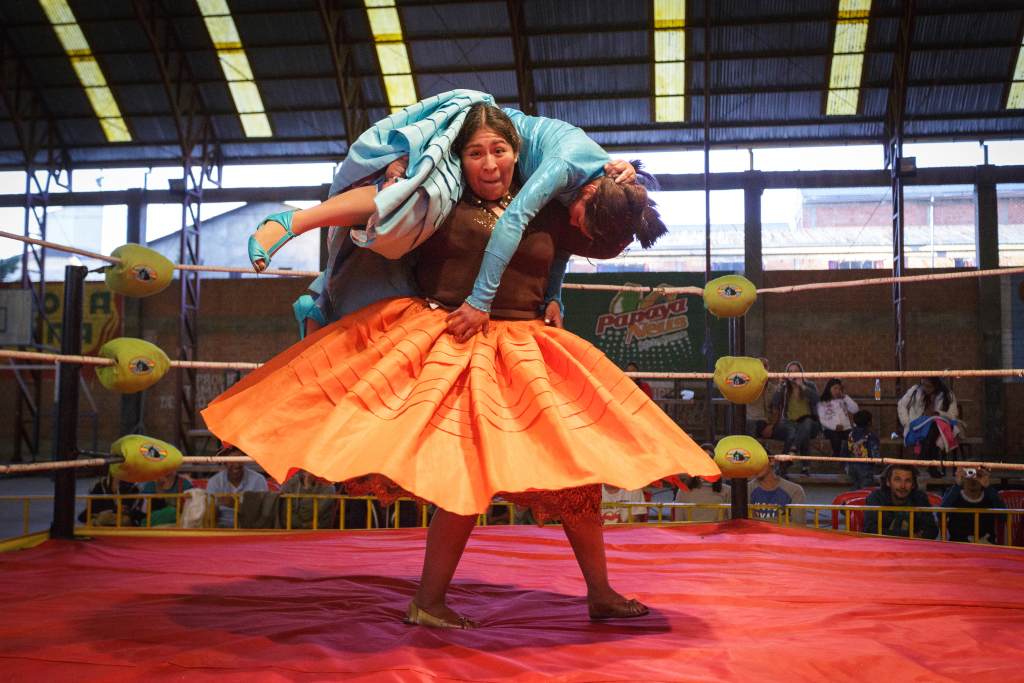 When they began, the male managers and organizers were taking a huge cut of their profits. This led them to form the women-only group called the Cholitas Wrestling Foundation. But, they don’t profit enough for wrestling to be their only gig. Carmen, for example, has run a small restaurant for years. The Fighting Cholitas consist of a variety of Bolivian women, some single mothers, some working more than one job on the side. They support themselves, their families, and the dreams of women everywhere who want equality.

In the same way that the stage in something like WWE is almost like that of a theater, the Cholitas dress up, play a part, and put on an athletic display for crowds. There is a hero and a villain character, and they tell a story through their wrestling. This illusion is known in the wrestling world as kayfabe. While some people call this type of wrestling “fake,” the moves, strength, and skill are all real. The falls and strain are real, too, and have landed some of the Cholitas wrestlers in the hospital. Naysayers who believe that the Cholitas aren’t incredible athletes are silenced when watching their talent in the ring. These Bolivian women continue to push past the opponents in their way. And though the pandemic put a temporary halt to their wrestling, it didn’t keep them pinned for long—they’re ready for the next match. 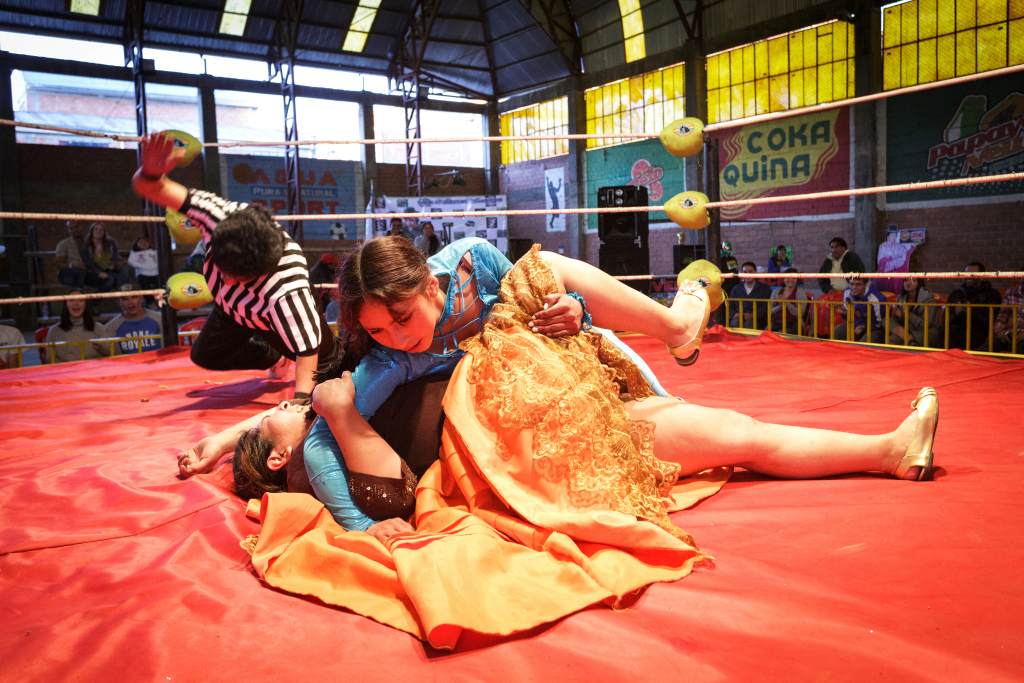 Next post The Disney Roller Coaster That Doubles As Medical Treatment

Previous post Blood In The Water: The Real-Life Shark Attacks That Inspired Jaws