Traveling Trash Can Makes Its Way From Myrtle to Mayo

A wayward trash can barreled through a 3,500-mile journey from Myrtle Beach to County Mayo, Ireland. 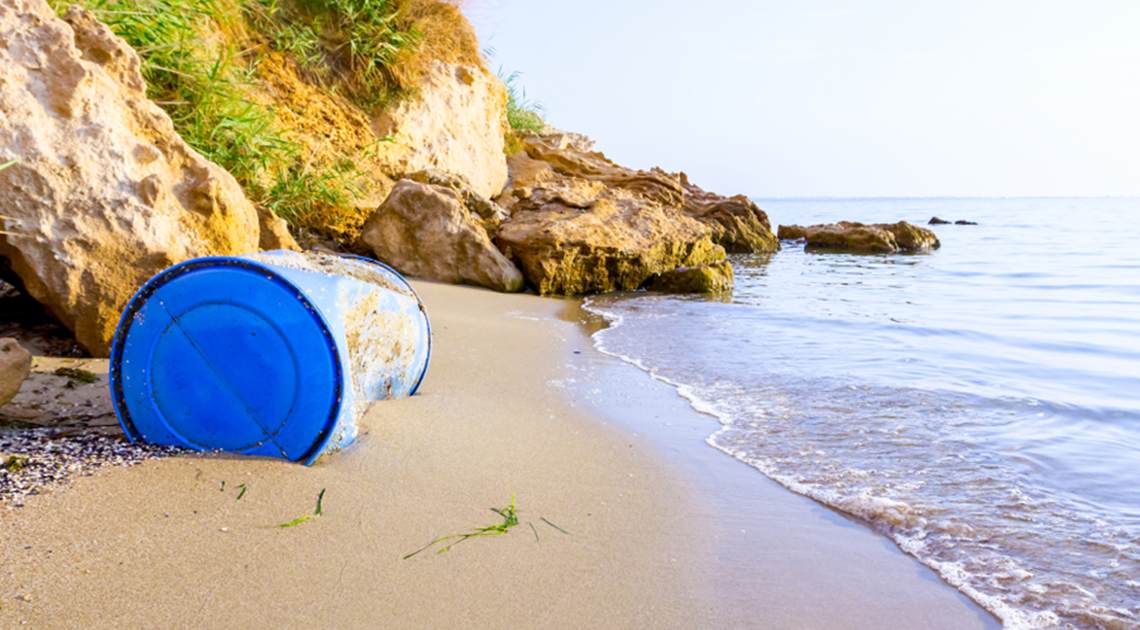 Beachcomber Keith McGreal, 44, and his children were taking a stroll along Ireland’s Mulranny Beach in County Mayo when they noticed a bright blue barrel had rolled in with the tide.

The romantic notion of a message in a bottle immediately came to mind, but the only love letter this vessel held was a sticker informing trash tossers that the bin was meant for recycling only — and that it belonged to the “City of Myrtle Beach, South Carolina.”

Before noticing the dirty sticker proclaiming the barrel’s ownership, McGreal noticed several context clues that it did not hail from the Emerald Isle, including a Spanish translation of its messaging and a thick coat of goose barnacles grown during the 3,500-mile journey.

Rolling with the message-in-a-bottle theme, McGreal set out to return the message to the city of Myrtle Beach with an email informing them of the tub’s travels.

Myrtle Beach public information officer Mark Kruea shared the email online Monday, explaining that after taking a close look and showing the photos to the city’s parks team, they can confirm that it is, in fact, their trash can.

Riding the Current to County Mayo

Exactly how the recycling bin wound up in international waters remains unconfirmed. While Kruea speculated that either storm winds or “human intervention” could be responsible, oceanographer Chris Paternostro of the National Oceanic and Atmospheric Administration deducted that the Gulf Stream may have carried the barrel up the Eastern Seaboard before shuttling it across the Atlantic and onto the west coast of Ireland.

Regardless of the barrel’s mode of transport, Kruea said the event is “in the top 10 things” in his more than 20-year-long list of oddities — a list we’re going to need to see ASAP.

Marine Debris Under the Sea

A storm may have swept up the garbage can, but literal tons of marine debris swim side-by-side with sharks, whales, and sea lions at any given moment, often after jumping ship during overseas transport.

From 61,280 pairs of Nikes splashing into the Pacific in 1990 to 28,800 rubber duckies taking the plunge in ’92, there’s no shortage of out-of-place items to be dispersed along international shorelines.

A coastal community in France spent 35 years baffled by a stream of Garfield phones rolling in with their tides before finally solving the mystery in 2019.

More morbidly, dozens of sneaker-clad human feet have been discovered on the shores of the Pacific Northwest and British Columbia in recent years, washing up thanks to buoyant materials used in modern sneaker production.

Oceanographers sometimes use such events to study currents and tides since they often know exactly where the objects fell into the ocean and where they ended up. In the case of the Myrtle Beach trash can, this does not apply.

The Little Trash Can That Could

“One trash can with an unknown time in the water and only a known origin is a little bit harder to give us a physical oceanography understanding,” said Paternostro.

The trash can may not make waves amongst the scientific community, but the irony of a recycling bin traveling through the very ocean it’s meant to protect could serve as a quirky educational tale for conservation efforts.

McGreal ensured the trash can’s journey was not for naught by cleaning it up and putting it to use on Mulranny Beach.

Just a few miles from the South Carolina coast, our team at Ripley’s Aquarium of Myrtle Beach continues to research, learn, educate, and conserve our world’s waters. Through guest awareness, community initiatives, and sea animal rescue, the team has learned quite a bit about the importance of coastline care in Myrtle Beach.

Whether you’re a permanent resident or just visiting with family, there are plenty of things you can do to help in your own way! Recycling and reusing plastics decreases the amount of debris on beaches or in oceans worldwide. Beach and river cleanups, like those sponsored by Ripley’s Aquariums, are a great way to get involved in your local community and help eliminate unwanted trash from entering into our river systems and oceans.

Ripley’s Aquarium’s Assistant Director of Husbandry, Stacia White, encourages you to do your part no matter where you’re visiting from or headed to. “Just by picking up discarded trash along our beaches and waterways, you are playing an important part in helping to protect our marine environments.”

Previous post The Hamster That Trades Cryptocurrencies... And Profits