Scientists are still figuring out why lightning sometimes flows up instead of down. 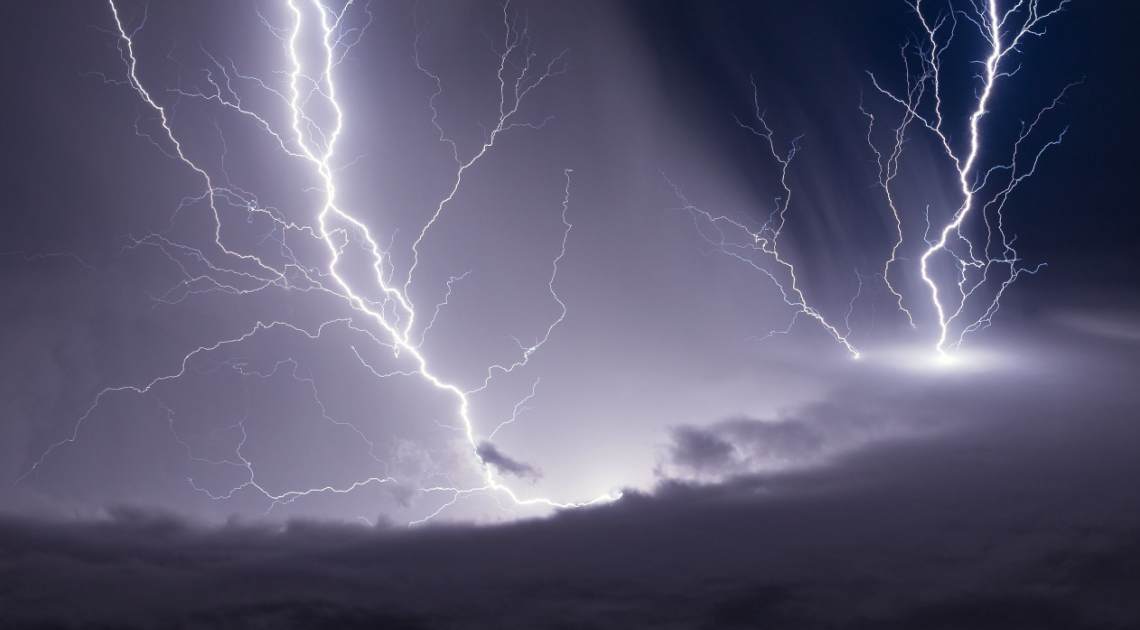 Located smack dab in the middle of Tornado Alley is Oklahoma, a state infamous for wild weather. The state has about 60 days of thunderstorms annually and roughly 53 twisters per year. It’s no wonder 1996’s Twister took place in the “Sooner State.”

The most enormous lightning bolt ever recorded did something unexpected: Instead of striking downward, etching a searing swathe of black destruction into the ground below, it streaked upward. Licking the very edge of space with its electric-sharp tongue, it shot 50 miles into the air, creating a hair-raising spectacle. Scientists refer to this kind of bolt as a “jet.” And this one was downright gigantic.

Upward streaming white-light jets prove incredibly rare. There are only about 1,000 instances worldwide each year. And unlike your average earthbound bolt, they are far more powerful. On average, they contain 50 times more energy. But that’s nothing compared to the Oklahoma jet.

On May 14, 2018, a tempest straight from The Twilight Zone rained over Oklahoma. https://t.co/BAesJuxBoH

The Most Powerful Lightning

The world’s most impressive lightning strike lit up the skies of Oklahoma in 2018. But it would take four years for scientists to offer up an analysis of its potency. They did this by analyzing its radio-wave emissions along with radar and satellite data. What they discovered is shocking (pun intended).

During the sky-piercing strike, 300 coulombs of energy were transferred from the origin point at the top of the cloud to the lower edges of space, an area known as the ionosphere. (The ionosphere is a layer of charged particles that delineates between the vacuum of space and Earth’s upper atmosphere.) Compared to your average lightning bolt with an output of 5 coulomb, that’s 60 times more powerful!

Recording the World’s Most Powerful Strike

Apart from the incredible size and power of the strike, scientists were amazed at their luck in capturing this data in the first place. It all started when a Texas-based scientist recorded footage of the massive lightning bolt.

After reviewing the video, researchers realized the event happened near the center of a lightning mapping array (LMA). An LMA is a network of radio antennas that record lightning strikes’ times and locations. Besides collecting data from this LMA, the researchers identified several weather radar systems in close proximity. Coupled with recordings from weather-watching satellites, they had everything they needed for one of the most in-depth analyses of lightning ever undertaken.

Not only did they use this data to measure the size and power of the jet, but they also discovered that it was the result of smaller structures known as streamers which developed at the tip of the lightning bolt, forging a direct electrical connection to the ionosphere. Of course, this still leaves the broader question of why lightning sometimes flows up instead of down.

Scientists are still hashing this out. But Levi Boggs, a Georgia Tech Research Institute scientist, has a theory about this gravity-defying weather phenomenon. “For whatever reason, there is usually a suppression of cloud-to-ground discharges. In the absence of the lightning discharges we normally see, the gigantic jet may relieve the buildup of excess negative charge in the cloud.”

As scientists continue studying upside-down lightning bolts, they will likely look well beyond Oklahoma. As it turns out, most of these epic sky-crowning strikes occur in tropical regions, making the Midwest episode powerful and unusual.

Next post That Time A Scientist Dug Secret Tunnels Under D.C. For Exercise