The Weirdest Deer-Like Creatures Of All Time

Extinct deer and their relatives evolved huge, bizarre antlers and even fangs!

If you think about it, deer are uniquely bizarre creatures. Unlike any other group of animals, they grow pointy bones atop their heads that fall off every year and then grow back. They adapt well, survive in a variety of conditions, and can outrun most predators. The deer of today range in size from the mighty moose, which can grow up to 1,500 pounds, to the pudu, which never grows larger than a Boston terrier.

However, as strange as modern deer are, their extinct cousins and other deer-like creatures are often even weirder.

M. giganteus is the most well-known of the Megaloceros genus, and it’s the most impressive, too. M. giganteus had bigger antlers than any animal ever discovered, growing up to 12 feet from tip to tip! The antlers were wide and flat, or “palmated,” like those of a moose.

This animal is also known as the “Irish Elk,” although it is not as closely related to modern elk as it is with other modern deer species. 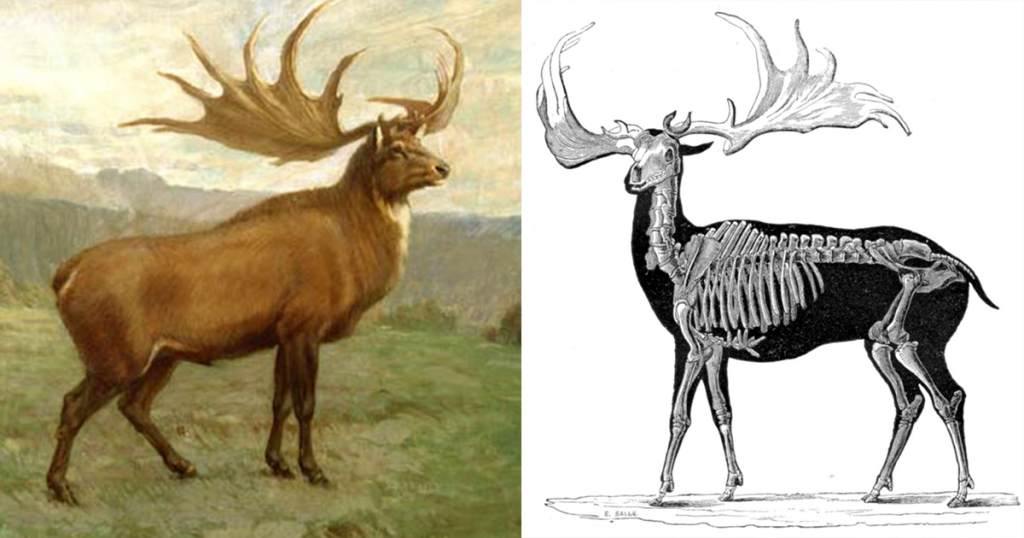 Even thousands of years ago, this animal impressed humans. It is believed that there is a painting of an Irish elk in the Lascaux caves. The images in those famous caves came from early humans who lived in modern-day France around 15,000-17,000 B.C.!

Is that a mythical beast with magical powers? No, it’s Tsaidamotherium! There are two species in this genus—both of which we know from very few fossil remains. In these species’, one horn is huge, centered at its forehead, and the other is tiny, barely noticeable. At first glance, you might think that it only had the one!

Tsaidamotherium is not a deer, but was more closely related to the modern musk ox. Deer, cattle, camels, and giraffes are all in the same group of animals called an “order.” Their order is “cetartiodactyla,” which includes all hooved animals with an even number of toes, as well as whales.

If two horns aren’t good enough, how about five—and a long set of fangs? Check out Hoplitomeryx—an extinct genus of deer that lived in what is now part of South Italy.

Imagery via Wikipedia || Life reconstruction of Hoplitomeryx by Mauricio Antón

Based on the awe-inspiring branches of antlers, you might mistake this animal for Xerneas, the mythical stag Pokémon.

Eucladoceros was nearly as big as a modern moose and had peculiar, many-branched antlers, which could split into as many as twelve “tines,” or points, per antler. That should win some prizes at any hunting competition! 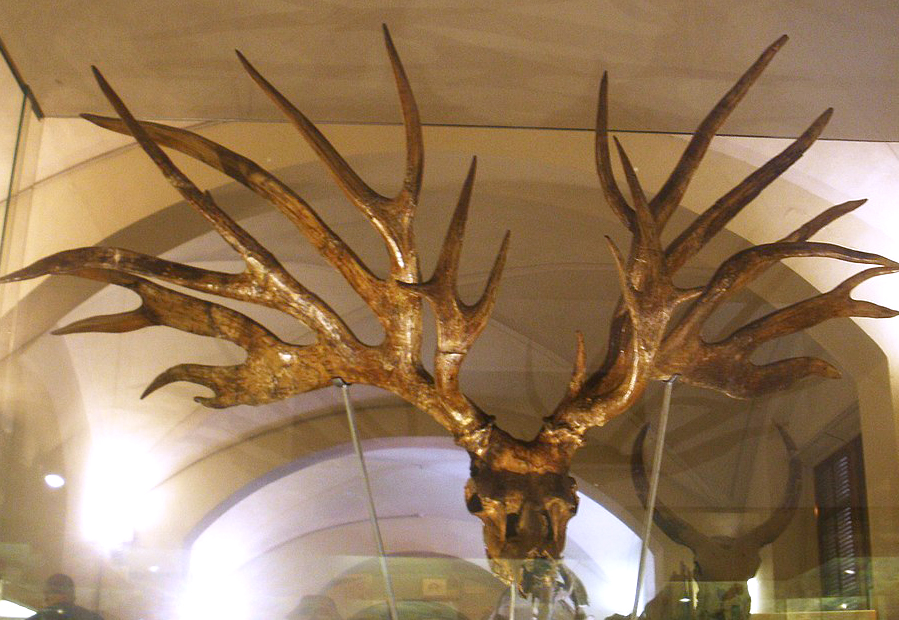 Synthetoceras, with a slingshot on its nose

The scientific name of this species, “Synthetoceras tricornatus,” means “combined horn, three horn.” It’s named for the horns on top of its head as well as the unusual protrusion on its snout.

This species was short but robust, and only the males had head decorations. It was a member of the family Protoceratidae, which included many other bizarre creatures with unusual horns and fangs.

The past is full of surprising creatures from giant versions of animals we have today, to animals with long tusks and fangs. Deer, antelope, cattle, giraffes, and their relatives are no exception. It leaves us to wonder about the thousands of species that have yet to be discovered.

Next post Spending A Night At The Haunted Pennhurst Asylum

Previous post Are Houseflies Really Only Abuzz For 24 Hours?