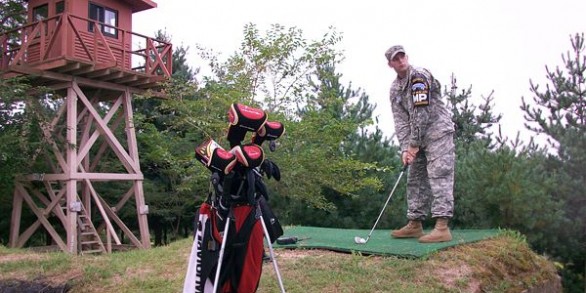 Next time you’ve got a hankering for some tee shots AND you happen to be in North and South Korea’s De-militarized zone, you might want to visit the area’s best golf course … if you’ve got the balls. 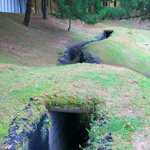 Best known as the World’s deadliest golf course, this 192-yard par 3 boasts live land mines, a gun tower and is nestled between North and South Korea’s border of which are both technically still at war.

“It’s a very hard green,” says 22-year-old Staff Sgt. Derrick Meisenheimer. “Pretty much everything bounces off the green … and into North Korea”Danger! Do not retrieve balls from the rough; live mine fields” greets visitors before they step onto the course, which contains an AstroTurf putting green. However, hitting the ball off the fairway means that it probably won’t be retrieved

Heavy barbed wire marks out of bounds on the left; a six-foot-deep military trench runs along the right.

As if that wasn’t challenging enough, local soldiers have reported some natural hazards as well. Golfers have spotted wild boars, Korean tigers, and water deer (sometimes called “vampire deer” for their protruding fangs). Not exactly the hazards you were thinking of, huh?

There isn’t much of anything on this army post, and there are only so many places you can go. This one-hole golf course, still remains as one of the few and favorite forms of entertainment for the folks in U.S. Army Camp Bonifas. Especially, when there’s always the chance of an exploding golf ball near by.