10 Facts About Freddie Mercury That Will Rock You

He designed the Queen logo, met David Bowie before either of them were famous, and dedicated an album to his cats, just to name a few. 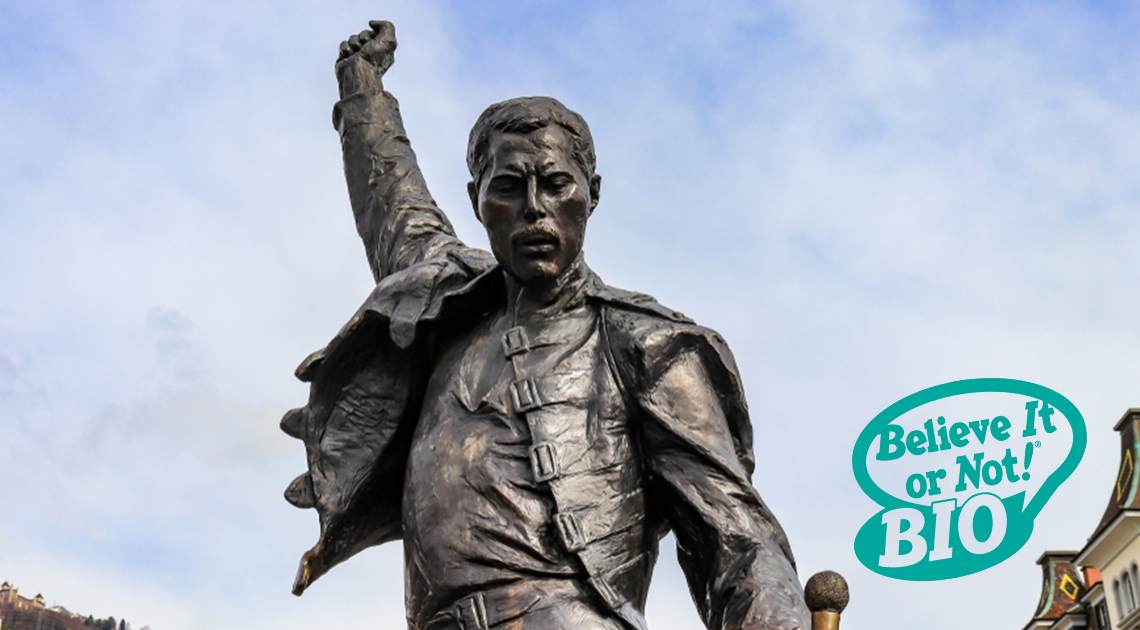 Best known for his flamboyant stage presence, effervescent personality, and unparalleled vocal ability, Freddie Mercury amazed audiences worldwide as the lead singer of the legendary rock band Queen until his untimely death on November 24, 1991, at the age of 45.

In honor of this unparalleled musician’s legacy, we’re sharing ten unbelievable facts about Mercury’s life that are guaranteed to blow your mind.

Despite being voted the 59th Greatest Briton of All Time, Mercury wasn’t born in Great Britain.

Born September 5, 1946, in Stone Town, Zanzibar — now Tanzania — Farrokh Bulsara spent his childhood between Zanzibar and India before immigrating to Middlesex, England, as a teen refugee. He began going by Freddie while in boarding school, eventually changing his name legally to Freddie Mercury after forming the band Queen in 1970.

Freddie Mercury wasn’t the artist’s only moniker, however. A week before Queen’s first album dropped, he released a single under the name Larry Lurex, a personal slight toward English glam rock artist Gary Glitter, of whom he was not a fan. The single bombed.

His famous mouth housed more than teeth than your average singer.

Mercury had four extra teeth pushing the rest forward, creating his trademark overbite. Despite being self-conscious about how his teeth looked, he refused to remove them lest it change his famous almost-four-octave vocal range.

Mercury’s vocal range was so impressive, scientists studied it!

In 2016, a European research team set out to find just why Mercury’s voice was so impressive. Using video interviews and acapella tracks to isolate his vocal frequencies and range, they pinpointed that he spoke at a median of 117.3 Hz, with belts ranging from 92.2 Hz to 784 Hz — a range that covers more than 3 octaves!

Though higher and lower notes were also heard in the recordings, the scientists could not distinguish whether the remaining octaves were created by voice or instruments.

Ultimately, it was Mercury’s unique vibrato that set him apart from classically trained singers with the same range, as his vibrato was higher and more irregular, which created a “vocal fingerprint.”

Mercury was a trained artist and even designed the Queen logo.

Much like fellow rock legend John Lennon, Freddie Mercury was a trained artist before gaining fame. Armed with a degree in art and graphic design from Ealing Art College, Mercury was more than capable of creating Queen’s branding. Despite not believing in astrology, he used each band member’s zodiac sign to design their emblem, topping it off with a phoenix as a symbol of protection over them all.

He stayed busy while studying at Ealing, making extra cash as a model for life drawing classes. He also started writing “Bohemian Rhapsody” while still in school! 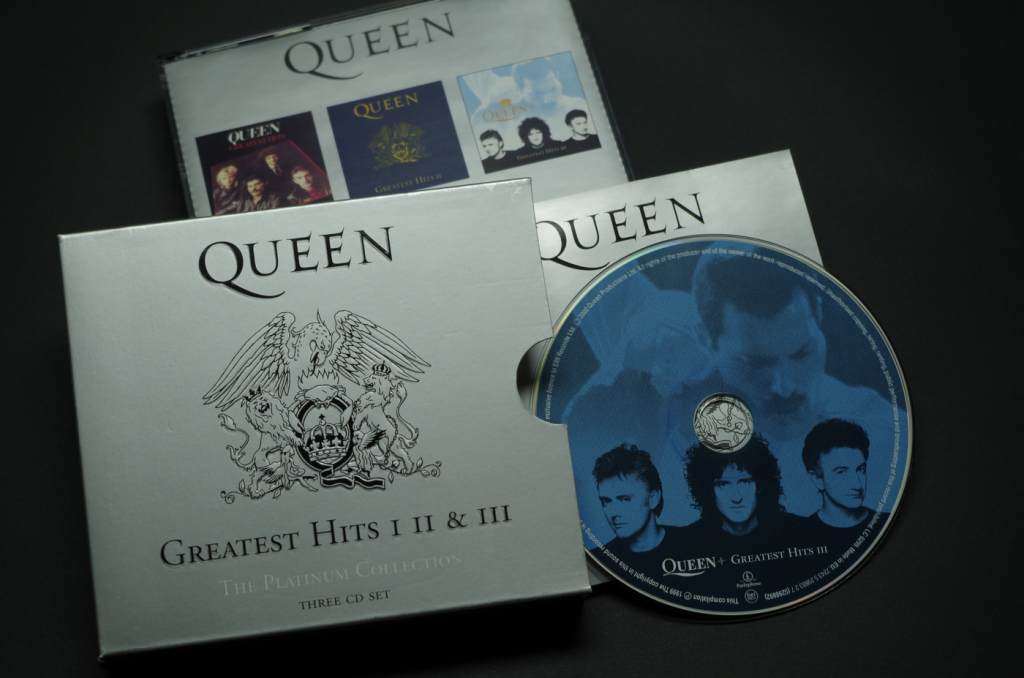 Long before teaming up for “Under Pressure,” Mercury worked as a roadie for David Bowie.

A man of many side hustles, Mercury inserted himself into the music scene by gigging around town and helping out musicians while he was still in school. One such gig was for David Bowie, who had a lunchtime show at Ealing Art College.

The two would continue to cross paths, first months later after “Space Oddity” was released and Bowie had gained some fame, if not money. He entered a Kensington Market stall where Mercury was working, and Mercury gave him a pair of boots he couldn’t afford.

It took 12 more years for the now-famous friends to get together to create 1981’s “Under Pressure.”

Mercury once spent a day watching The Golden Girls with Princess Diana before sneaking her into a gay bar.

Mercury palled around with the likes of Princess Diana. The duo once spent an afternoon with comedians Cleo Rocos and Kenny Everett watching The Golden Girls on mute, making up their own dialogue before the trio smuggled the Princess for a night out at the Royal Vauxhall Tavern by disguising her with an army jacket, hat, and glasses.

Mercury’s other famous friends included Elton John and Rod Stewart, or as they called each other, Sharon (John), Phyllis (Stewart), and Melina (Mercury). After Mercury’s passing, Elton John received a painting that became one of his most prized possessions with a card that read, “Dear Sharon, I saw this at auction and thought you would love it. I love you, Melina.”

Though known for his outgoing stage presence, Mercury was very shy in private.

Mercury’s stage persona was wild, outrageous, and flamboyant, but according to Queen bandmate Roger Taylor, “He was shy, gentle, and kind. He wasn’t the person he put over on stage.” That being said, he did love an epic party.

Notorious for throwing parties that lasted for days on end with dancers, snake charmers, strippers, and illicit substances, Mercury’s parties were so famed that the hotel he celebrated his birthday at in 1987 continues holding a gathering in his honor every year.

Mercury dedicated his solo album to his beloved cats.

Mercury was a known cat lover, having as many as ten at one time, all but one of whom were rescued from shelters. He would frequently call his cats from the road.

Though he enjoyed the presence of all of his cats, he wasn’t shy about which was his favorite — Delilah, whom he loved so much he wrote about her despite her peeing all over his Chippendale suit, as the lyrics go.

As for Tom, Jerry, Oscar, and Tiffany, they earned a dedication in his 1985 solo album, Mr. Bad Guy.

Mercury’s longest and possibly most important relationship was with a woman named Mary Austin.

Though he is often labeled and celebrated as an openly gay frontman, Mercury also had many relationships with women over the years. However, no man or woman could ever take the place of Mary Austin, whom he first met in 1969 and would have married if he had not continued to cheat on her during their engagement.

Mercury once described his relationship with Austin as a marriage, saying, “Mary is the only friend I’ve got, and I don’t want anybody else.”

Mary received half of Mercury’s estate when he passed and kept the location of his ashes a guarded secret.

Regardless of his bond with Austin, Mercury’s last partner was Jim Hutton, an Irish hairdresser who, though they could not get married, lived together and showed their love by wearing wedding rings. Hutton documented their relationship in his 1994 memoir, Mercury And Me.

Mercury announced his AIDS diagnosis the day before he died from the disease.

While the date of Mercury’s AIDS diagnosis has not been confirmed, it is widely speculated that it was sometime around 1987 due to his increasingly gaunt appearance and the end of Queen’s touring.

After becoming rather reclusive in the last two years of his life, Mercury released a statement confirming his diagnosis on November 23, 1991 — a day before his death — saying, “I felt it correct to keep this information private in order to protect the privacy of those around me. However, the time has now come for my friends and fans around the world to know the truth, and I hope everyone will join me, my doctors and all those worldwide in the fight against this terrible disease.”

Mercury’s close friend Dave Clark, of the Dave Clark Five, was alone with Mercury when he passed.

Though Mercury’s announcement sparked outrage amongst many in the community, who believed he could have been critical in raising awareness and funding towards the cause during his life, his death inspired many conversations about HIV and AIDS, resulting in millions raised in his memory.

However, his legacy goes beyond his disease, with his style, creativity, and groundbreaking performances leaving a lasting mark for generations to come.

Next post The Many Miracles of Saint Nicholas: Santa’s Inspiration