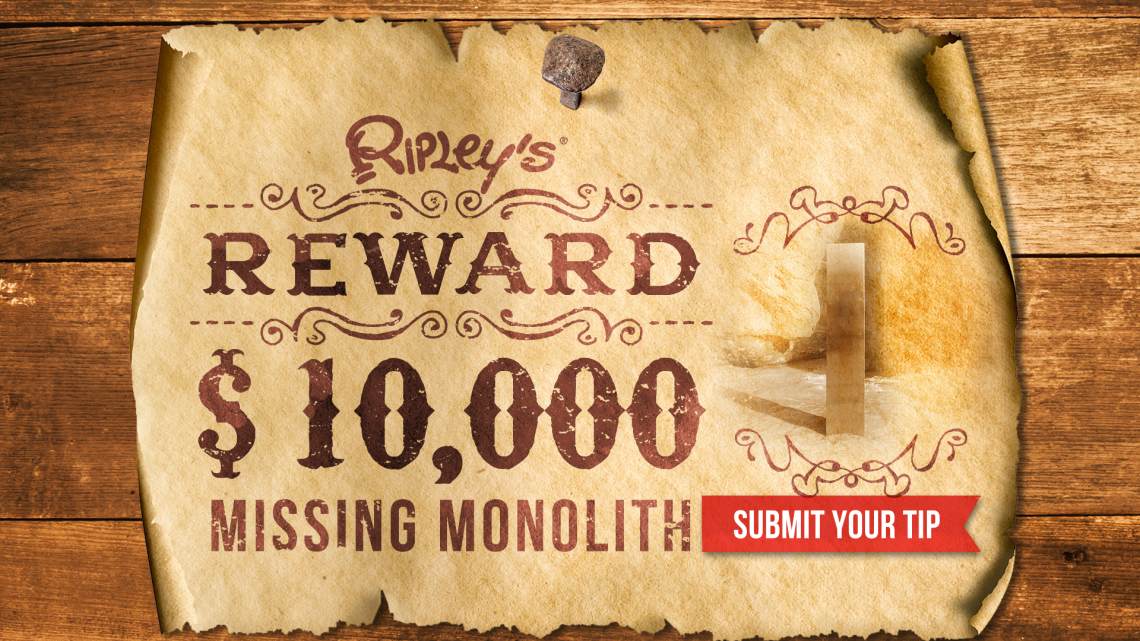 Last week, the internet was buzzing over the news of a mysterious, alien-eqse icon dropped into the southeastern Utah desert. And this week, the same unknown object has suddenly gone missing. Its brief appearance has the world wondering—what was this unusual structure? Who placed it there, and where has it gone? We have questions (and a $10,000 reward for the answers).

A 10-to-12-foot tall monolith was spotted by Aero Bureau and wildlife resource officers during an overhead count of bighorn sheep in the Red Rock Country area. The air team spotted the towering metal structure from above and took to the ground to investigate. The Utah Department of Public Safety says there was “no obvious indication” of who is responsible for the object’s placement. Reddit threads, Tweets, and Facebook comments revealed the coordinates of the monolith, however, the DPS urged tourists to avoid visiting the temporary addition in the fear of a required rescue if they were to become stranded. But, this word of caution didn’t stop curious explorers from navigating their way to it.

And like any good extraterrestrial mystery, the monolith’s guest appearance was brief and has since vanished from the desert grounds. After being illegally installed on the 245 million acres of public land, it was removed by “an unknown party or parties.” Bret Hutchings, a department helicopter pilot, told KSLTV that the monolith is the “strangest thing that I’ve come across out there in all my years of flying.” He, and many others, have theories surrounding what the structure could be: from “some new wave artist,” to “somebody that was a big ‘2001: A Space Odyssey’ fan” as it closely resembles the black monument in the 1986 film.

We may not know if an extraterrestrial or earthling installed the “monolith” structure, but we can confirm that it has been taken by an unknown party or parties. More: https://t.co/zmlHF4kPn9 #monolith #utahmonolith #utah pic.twitter.com/TiQMHK9cyM

In a year full of chaos, the sudden appearance and disappearance of the monolith has proved quite a distraction amidst the 2020 news cycle. Naturally, as curators of the odd, unusual, and unknown, we’re on the hunt for the missing extraterrestrial artwork. Who placed this shining beacon in the Utah desert? Who took it away? Where is it now?

Ripley’s will pay $10,000 to the first person who comes forward as the proud legal owner of the monolith or who provides accurate information exclusively to Ripley’s on where to find it. Tips can be submitted anonymously, but hurry—this reward expires at the end of this weird year, December 31, 2020, at 11:59 p.m.!