Luke McPherson was walking through a dark building in an abandoned wildlife park when he came across a huge tank of murky green liquid. Passing by the tank and continuing into the building, he saw scattered remnants of educational displays, trash, disused signs, and chairs. It wasn’t until he stepped behind the tank and turned to face it again that he saw what it held.

Now illuminated from behind, the animal inside the opaque fluid revealed itself. McPherson gasped as he could see the angular tail of a five-meter-long shark, long dead, a dark silhouette waiting silently against the green glow of sunlight.

McPherson was filming for his Youtube channel, which focuses on the exploration of abandoned buildings. Luckily, he caught the discovery on camera. “It was just amazing that the shark tank was just in perfect condition,” he said.

This is what remains of an enormous display of something like taxidermy, reminiscent of the artist Damien Hirst’s most famous piece. The shark that McPherson found is bigger, though. 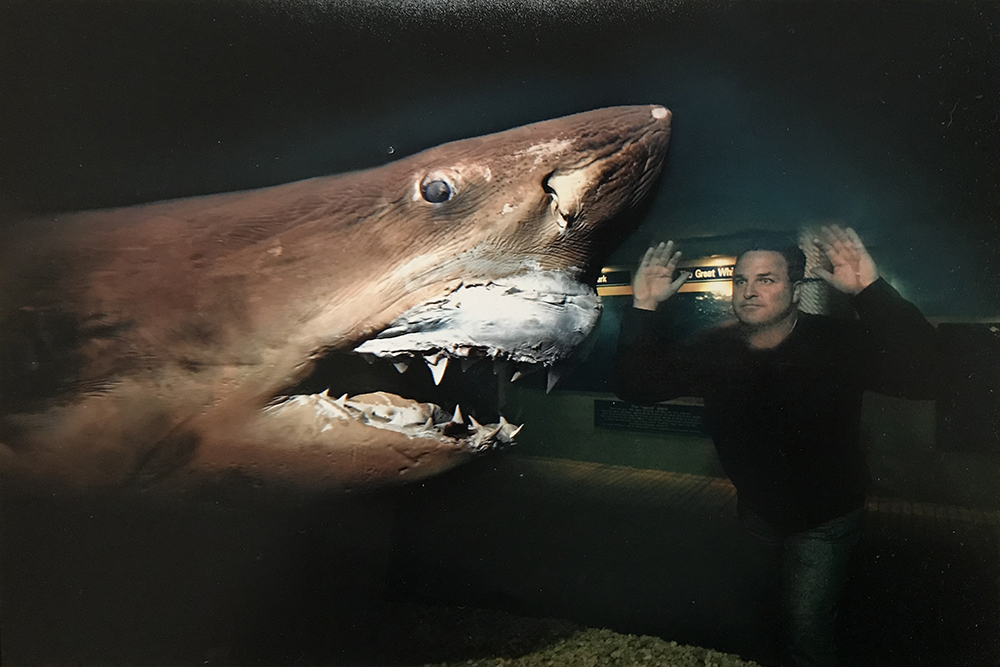 This wildlife park was once a popular attraction in Victoria, Australia called “Wildlife Wonderland.” It had live animals and a museum shaped like a 100-meter-long earthworm, along with educational displays and games. Many of the displays, signs, pictures, and games are still there, dilapidated and haunting.

While the park in its heyday remains a fond memory for many who grew up in this area around Bass, Victoria, it closed in 2012. According to some reports, the park didn’t have a license to display native animals, in violation of the Wildlife Act 1975. The operator was evicted and he closed down the park, giving the animals to DSE and the RSPCA.

The shark, a great white named “Rosie,” died in a tuna fishing net in 1998. This fate is all too common for sharks; Oceana calls accidental catches from the fishing industry “one of the biggest issues facing sharks today.” An artist took Rosie, preserved her body, and gave her to Wildlife Wonderland. According to Robert Jones, who half owned the park from 2003-2006, Rosie was never gutted, unlike most fish and taxidermy, and the body is as hard as a rock.

It’s not clear what chemicals were used to preserve this particular animal in what is known as “chemical fixation,” but McPherson could smell something. “It was quite a strong smell that came from that solution too, because people had removed the top part of the tank,” he said. “It was almost a glue smell.”

Because the top part of the tank was removed, the liquid appears to be evaporating, leaving the tip of Rosie’s dorsal fin extending ominously above the waterline. If no one comes to preserve the shark, more liquid will evaporate, her condition will worsen, and she will most likely be destroyed.

Whatever happens to Rosie’s body, she’ll live on in photos, videos, and memories of those who visited her in Wildlife Wonderland.

Next post How Long Does It Really Take to Digest Swallowed Gum?