The world's largest outdoor museum occupies 300 acres just outside Bangkok – and in case you're wondering, that's about 227 football fields put together! 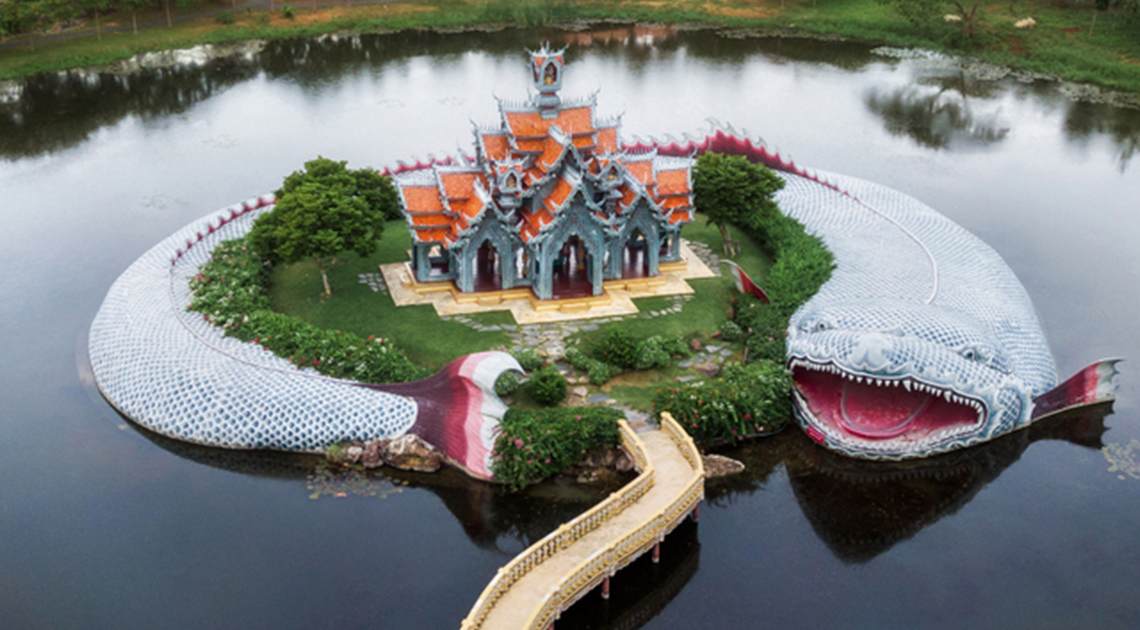 The world’s largest outdoor museum occupies 300 acres just outside Bangkok — and in case you’re wondering, that’s about 227 football fields put together! The grounds of this location, Muang Boran,  are shaped like the map of Thailand and feature 116 life-size replicas and scaled-down models of some of Asia’s most impressive monuments.

Muang Boran, or Ancient City, is the love child of eccentric millionaire businessman Lek Viriyaphan, who also funded the construction of Bangkok’s Erawan Museum (famous for the 250-ton three-headed elephant statue that can be seen from miles away) and Pattaya’s Sanctuary of Truth, a 100-meter-tall, all-wood building that’s part temple, part art gallery, and all-around weird. 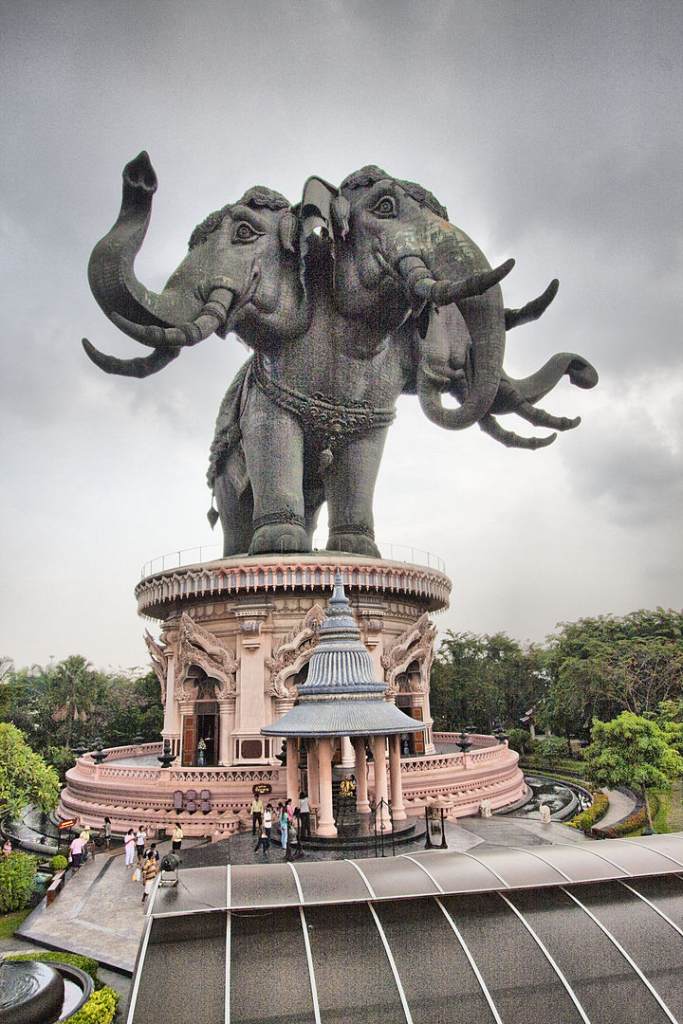 When Viriyaphan bought land in the Samut Prakan area outside Bangkok back in 1963, his original plan was to build a huge golf course and have replicas of famous Thai landmarks as part of the decoration and design of the club. He apparently got a little carried away in the process and somehow ended up building an entire attraction park filled with historic sites instead.

With the help of experts from the National Museum, plus muralists and architecture students, Viriyaphan then set out to recreate some of the most famous buildings in Thailand. He even made sure the grounds of Muang Boran were divided into four regions so the buildings could sit exactly where you would geographically find them in real life if you were to travel to those regions.

Essentially, you get a chance to see all of Thailand’s most impressive landmarks in one place when you visit Muang Boran — that is, if you’re willing to ride a bike or drive a golf cart through the park, as the grounds are simply too big to be explored in one day.

The Lay of the Land

Some of the park’s most impressive structures include the Dusit Maha Prasat Palace: the original 1806 design of the audience hall built by King Rama I inside Bangkok’s royal palace, the Grand Hall of Wat Maha That: a 1:4 scale of the original giant temple ruins found in the ancient city of Sukhothai, and the Pavilion of the Enlightened: a stunning green and gold floating temple where, the story goes, 500 monks from different cultural and spiritual backgrounds all became enlightened and attained Nirvana. 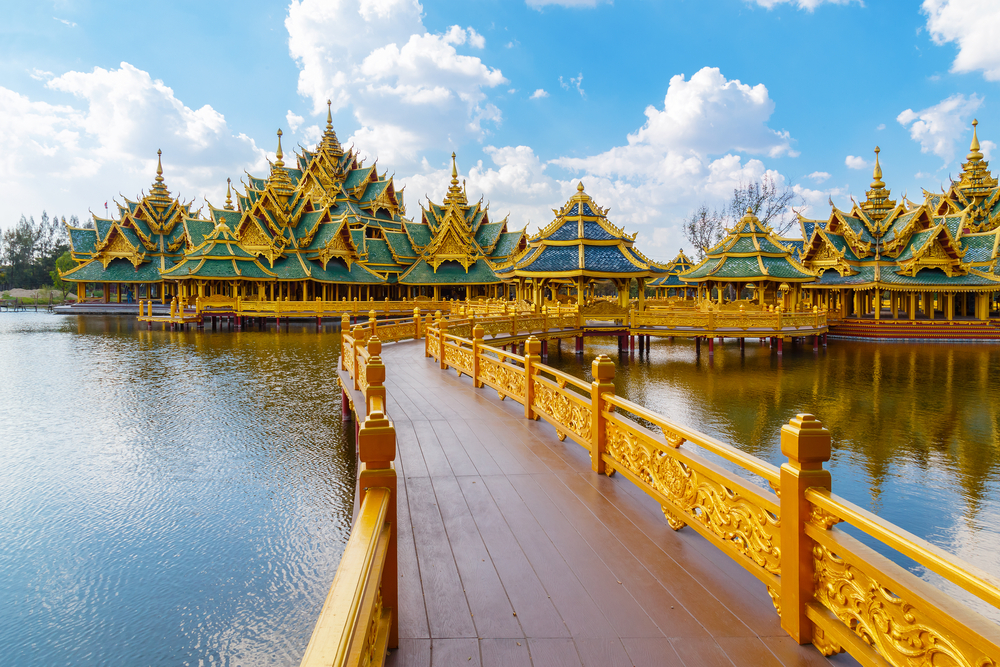 Pavilion of the Enlightened in Bangkok, Thailand

The park is also home to many wonderful examples of ruins from the old Khmer Empire which, for many centuries, ruled over parts of  Thailand, Vietnam, Cambodia, and Laos. The Khmer Empire is most famous for having built the 12th-century Angkor Wat in Cambodia, a UNESCO World Heritage Site and the world’s largest religious structure. 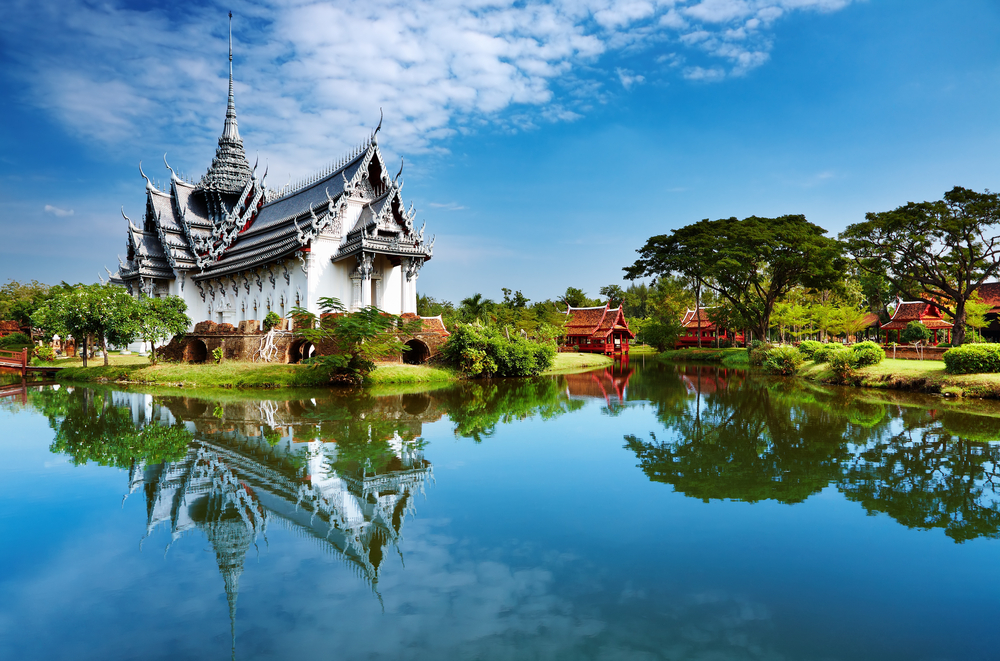 While Angkor Wat itself is not represented here, you can see similar examples of architecture in the recreation of Ayutthaya’s Sanphet Prasat Palace. Since the original palace was destroyed in the 1700s when the Burmese burned down Ayutthaya, this is your only chance to ever see its splendor in person.

Perhaps one of the most stunning buildings to visit here, however, is the scaled-down version of Preah Vihear, a ninth–century temple built right on the border between Thailand and Cambodia and dedicated to Lord Shiva.

Technically speaking, the temple right now sits on the Cambodian side, though Thailand has long disputed the location of the border and even fired some warning shots into their neighbors’ land in 2009 and 2011 after very heated skirmishes over it. The real temple is now closed to the public to avoid further disagreements.

Want more? The grounds of the park also feature plenty of pavilions, stupas, lakes, and islands reached via grand bridges and platforms. There’s even a floating market, where traditional long-tail boats take visitors through klongs (narrow canals) to pick up souvenirs, take photos, and see up close what old wooden shophouses once looked like.

Step Out Of The Box And Into Extraordinary Destinations

Haven’t had your world-traveler fix? Find more astonishing locations like Muang Boran inside the pages of Ripley’s newest book, Ripley’s Believe It or Not! Out of the Box, on sale now on Amazon and most major retailers.