Some roads have even been fitted with special bridges that allow the crabs to cross without being smushed. 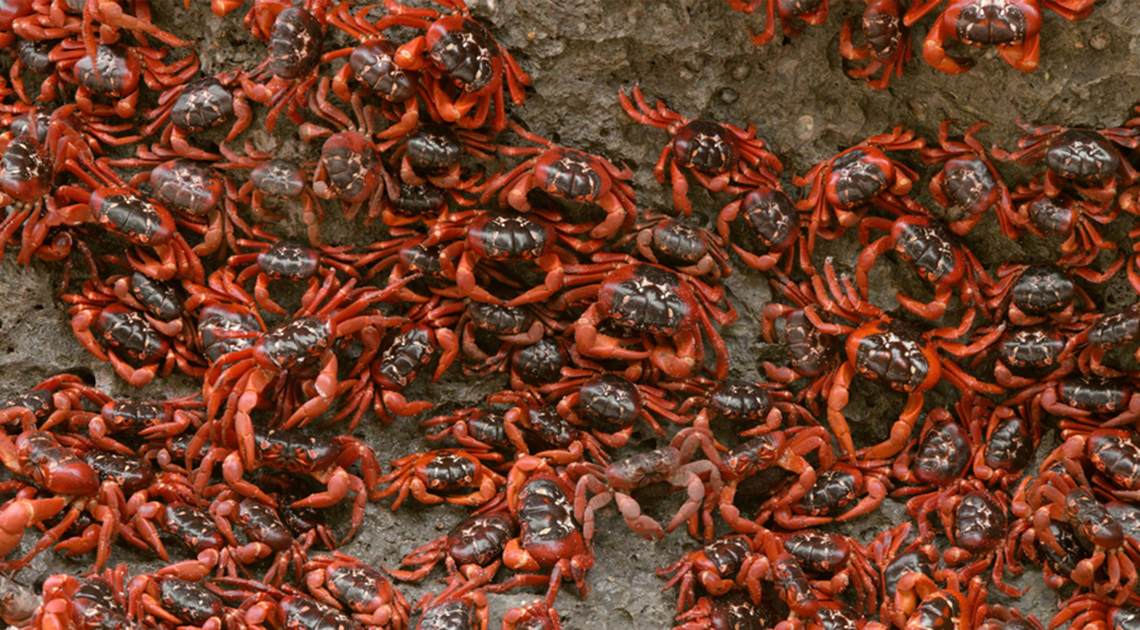 Seasonal changes differ depending on where you live, whether you’re greeted by the glow of autumn leaves in Maine’s Acadia National Park or thrilled by spectacular super blooms following a wet winter in Death Valley. But for the residents of Christmas Island, located off the coast of Western Australia, seasonal activities look different. Every year, locals deal with a migration of red crabs so thick it shuts down local roadways and highways.

Here’s what you need to know about what it’s like to live (and not drive) on Christmas Island during this strange, albeit natural, event.

How Not to Make Crabby Patties

During the march of the Christmas Island crustaceans, automobiles become useless. And pedestrians don’t get off much easier. As videos posted to social media show, people must carefully pick through waves of the scarlet-hued creatures, which make their way from the island to the ocean.

ICYMI: Millions of red crabs are emerging from the center of Christmas Island for their annual migration journey to the ocean https://t.co/r2KIBe24BJ pic.twitter.com/HN32zEWApN

What about thoroughfares that can’t be shut down? Locals have gotten downright innovative with engineering to protect the crabs. Some roads have even been fitted with special bridges to help the armored sea life avoid treacherous crossings. Parks Australia has declared this mass movement “one of the most incredible natural processes on Earth.”

Single Crab in Search of Love

What motivates the critters to head out like clockwork each year? The search for love. Large males lead the parade with interested females trailing close behind. All told, a single female can lay more than 100,000 eggs. They take a well-worn route used by their crabby ancestors, journeying from the jungle to the Indian Ocean where they find mates and make coastal burrows.

The Australian government estimates that roughly 50 million red crabs inhabit Christmas Island, their only home on the planet. The phases of the moon determine the ultimate timing of the event, as does the first rainfall of the wet season, permitting crabs to keep their bodies moist throughout the trip. Because of these different factors, the crabs have been known to travel as early as October or as late as January. Despite such flexible dates, the crabs complete the migration in synch.

All this begs the question: What’s life like for residents of Christmas Island when red crabs make their move? According to Parks Australia, “The crabs [turn] up everywhere, including at the door of an office block.” As you can imagine, this makes for very busy Parks Australia staff who must manage road closures and rake crustaceans off essential roadways. They also construct crossings, underpasses, and bridges for the crusty travelers.

But the arduous trip also makes for a thriving local tourism scene, with nature lovers and tourists flocking to the island’s beaches and coves to catch a glimpse of the action. Local radio stations even dedicate their airways to covering the migration with travel advice and updates. And Parks Australia has gone a long way toward protecting thousands of crabs from getting squashed by vehicles. The effort has proven beneficial for the island. After all, the crabs prove “extremely important to the island’s rich biodiversity.” When not migrating, the red crabs keep the forest floor in optimal health by eating leaf litter.