Theories abound about the island’s origins, from UFO activity to religious miracles and more. 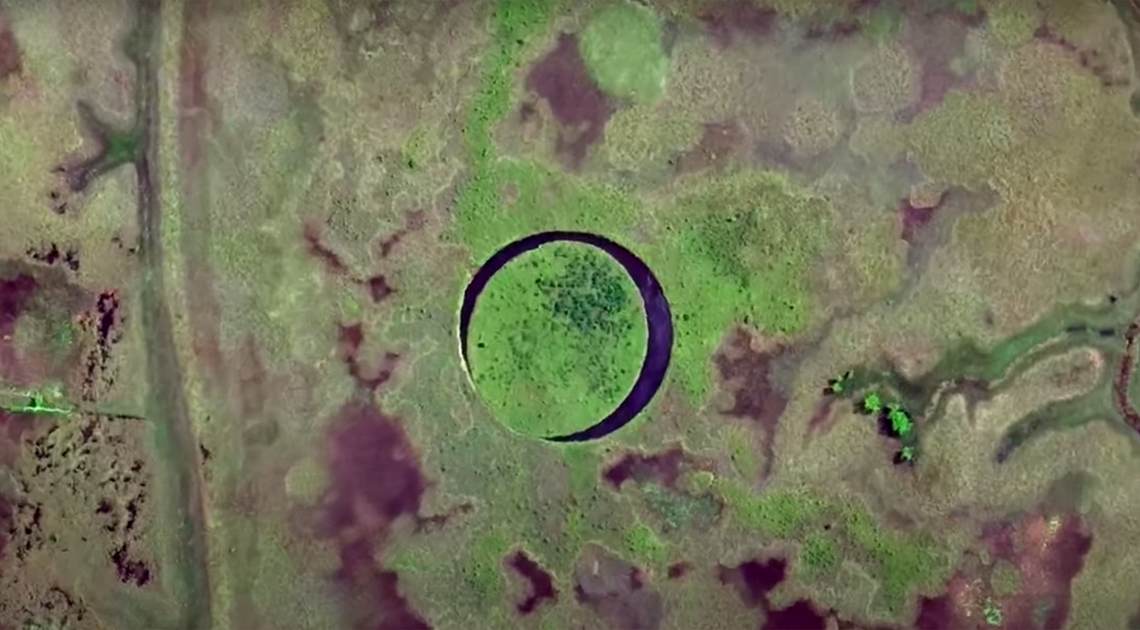 An “unnaturally” round island in the Argentine countryside has the internet abuzz about paranormal activity. Known as El Ojo or “The Eye,” it sits at the coordinates 34°15’07.8’S, 58°49’47.4″W and has been visible for nearly two decades. Theories abound about how the geometrically-perfect, floating island came into being. They run the gamut from UFO activity to a revelation of God’s presence on Earth.

To get to the bottom of the phenomenon through scientific exploration, a group known as El Ojo Project has conducted limited expeditions to the area. Keep reading to find out more about their mission to uncover the truth.

Mysteries of “The Eye”

“The Eye” sits in the middle of a swampy marsh in the Parana Delta of northeastern Argentina. According to scientists, it has existed since 2003. Almost geometrically perfect, it appears to float on its axis, surrounded by a tiny channel of clear and cold water. Such water proves unusual for the area. Unlike the contrasting swampy marshes, the bottom of “The Eye” also appears very hard.

At 387 feet (118 meters) in diameter, scientists have also observed the island leans on various parts of the outer circle’s wall throughout its rotational cycle. They’ve noted how firm the terrain of the island feels. Because of its strange symmetry and physical features, many observers have questioned its origins. After all, how could such a precise-looking formation be natural? Some have even suggested extraterrestrial manipulation of the landscape to camouflage a UFO base.

Perhaps Google Earth images best capture the stunning nature of this mysterious formation and its weird swirling movement. A handful of YouTube videos, like that posted by Timothy Whitehead, clearly show the island’s gentle spinning over time.

Getting to the Bottom of the Mystery

In 2016, a team of researchers and filmmakers came together for a Kickstarter campaign. Launched by Ricardo Petroni, a hydraulic and civil engineer from New York, he teamed up with film director and producer, Sergio Neuspillerm. Their goal? To get to the bottom of the processes, natural or otherwise, that have shaped the island. To date, they’ve reached $9,698 of their $50,000 goal. Kickstarter declared the campaign unsuccessful on October 10, 2016.

The group hoped to use crowdfunding to finance extensive scientific and paranormal research, including a scuba expedition, drone data collection, and sampling of local plants, soil, and other objects. They also envisioned augmenting their team with biologists, geologists, and ufologists. Unfortunately, gaining more answers about “The Eye” appears to be on hold for the moment.

A More Down-to-Earth Explanation for “The Eye”

Petroni, Neuspillerm, and their team aren’t the only ones “floating” theories about “The Eye,” though. Daniel Roy Finkley offers more down-to-earth observations of the phenomenon on sites like Paranormal News. He has noted “The Eye’s” similarity to dozens of other formations found near the coast of Argentina. There’s even a YouTube video that delves more deeply into these comparison sites.

Interesting linkages with other natural phenomena also exist. For example, the Westbrook Ice Disk observed floating and rotating in the Presumpscot River in Maine during the winter of 2019 has an eerie resemblance to “The Eye.” According to Bangor Daily News, such ice disks prove common when the right atmospheric conditions occur.

What makes ice disks such as the one in Westbrook so perfectly round? Rotational shear. In other words, when a water current flows to one side of the ice rotating it in a circular formation, the ice chunk in the middle gets repeatedly eroded and polished around the edges. In the process, it forms a highly symmetrical circle.

Ice Disks and “The Eye”

Applying the ice disk theory to “The Eye” means that a reasonably slow-moving water current flows beneath one side of the floating island, naturally twisting it in one direction. (Could this explain the clear, cold water, too?) The island’s rotational action, in turn, has led to erosion of the edges of the island in a circular manner. In the process, the motion has also carved out a circular hole.

Floating islands with plants are quite rare. Like ice disks, could the right set of conditions bring them to life? Only time and more research will tell. As for whether or not “The Eye” is extraterrestrial, paranormal, or the result of a “perfect storm” of natural causes, our money’s on the ice disk concept. After all, Westbrook and the Parana Delta have yet to be overrun by little green guys in space suits.