Since the practice began in the 1600s, not a single injury or death ha sbeen recorded. 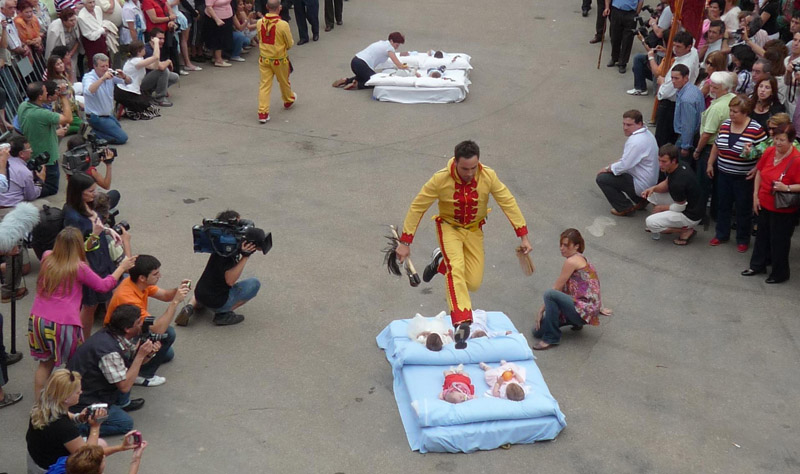 Why Baptize When You Can Fly?

There are a lot of odd festivals and customs around the world. Some of them are scary, others are a bit silly and funny, and a surprising number of them involve babies. The Spanish festival of El Colacho combines all three elements for an event that’s just all around strange.

In most Catholic churches, a baby is baptized shortly after birth. The parents take the newborn to their priest, they bring along a couple friends, and some holy water is sprinkled on the child’s forehead. No muss, no fuss, maybe some tears, but certainly no harm is done. This is meant to cleanse the baby of the original sin of man and allow them a fresh start at life.

However, in the predominately Catholic city of Castillo de Murcia, the residents have a different way of wiping the slate clean. Once a year during the Catholic festival of Corpus Christi, some of the town’s adult men dress up like devils and perform their own kind of cleansing.

The men dress in yellow costumes and often wear devil masks. They start by roaming through the gathered crowd and hitting some of the people there with whips.

With the crowd appropriately riled up, next comes the portion of the festival that sees the sins of babies wiped away. All of the children born in the last year are laid down on pillows and sheets in the middle of a busy street. The men in the devil costumes then proceed to run and jump over the babies. As the devil clears the air over the prone babes, all of their sins go with him, and they’re safe to start their fresh life.

The festival has been taking place since around the 1600s. In all that time, no deaths or injuries have ever been reported. While it might seem like there’s a significant worry of someone slipping or missing their jump, that worry seems to be misplaced.

For its part, the Vatican has tried to put an end to the festival and get the Spanish town to distance itself from such practices. But its attempts seem to be in vein as nothing’s changed in the last 400+ years.