Before he could deliver any lines in his iconic accent for "Dracula," he first had to learn how to speak English. As a stage actor, he learned his lines phonetically before ever knowing the language! 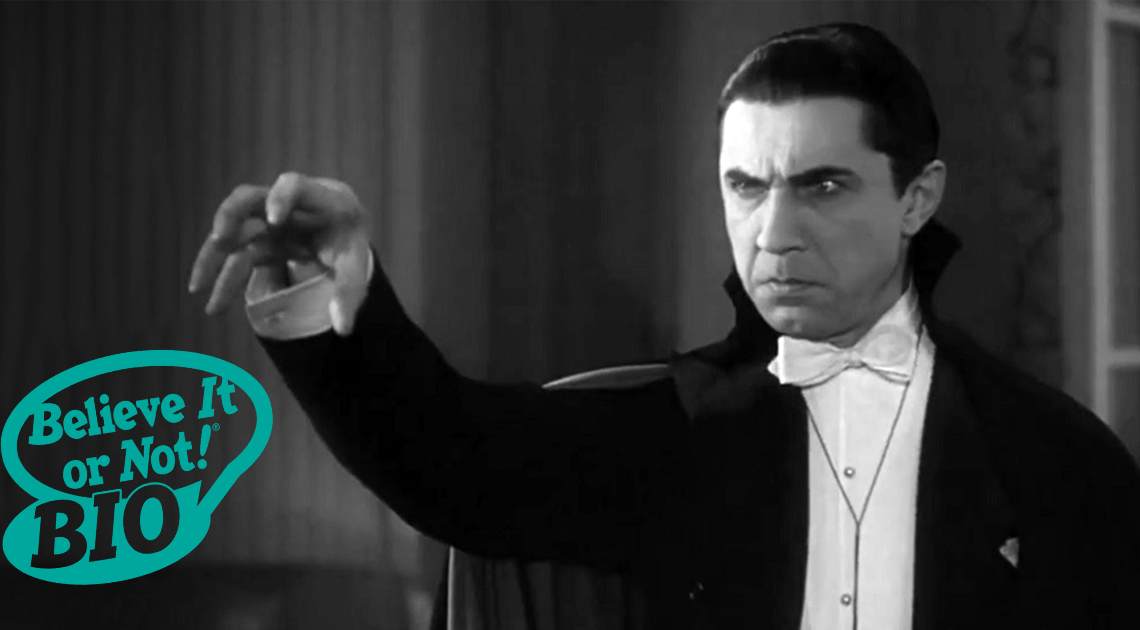 Béla Ferenc Dezsö Blaskó was born in then-Lugos, Hungary, in October 1882. From humble beginnings, dogged by social unrest and smaller performances, he rose to stardom as the emerging Hollywood’s Bela Lugosi.

Is there truth to the tale that he was buried in one of the Count’s capes, and what is his connection with Robert L. Ripley himself? Let’s take a whistle-stop tour of some of the most astonishing facts about the actor’s life.

Lugosi Only Played the Legendary Vampire in Two Movies

Though he had played the part in the stage show, Universal didn’t want Lugosi to reprise his role as Dracula on the big screen. William Courtenay, Ian Keith, and Conrad Veidt were among the higher-profile actors the studio considered first. Lugosi fought tooth and nail for the opportunity and eventually did secure the part.

Lugosi has since have become synonymous with The Count, but after his original stage performance as the character and its subsequent movie adaptation, he played Dracula in only one other movie in his lifetime.

He reprised his most famous role in 1948’s Abbott and Costello Meet Frankenstein, and while he played similar parts in other movies, none were truly Count Dracula.

Lugosi may have been typecast and reduced to second billing later in his career, but in Dracula, he was the star of the show. Sadly, though, he wasn’t paid accordingly.

While David Manners made around $2,000 per week for his role as Jonathan Harker, costar Lugosi earned just $500. Hungry for such a role at the time, he allowed the studio to take advantage of him.

His Live-Action Performance Provided the Basis For Fantasia’s Demon, Chernabog.

Disney movies are well known for taking some surprisingly dark turns at times. Fantasia’s infamous “Night on Bald Mountain” sequence is probably the most terrifying footage in the company’s long history, and you might be surprised to learn that Bela Lugosi played a huge part in bringing this spooky piece to life.

The monstrous demon, Chernabog’s animation was brought to life by the actor, whose live-action performance provided the reference for Chernabog’s own. Later, it would be claimed that this performance wasn’t used in the final product, but it’s said that Walt Disney personally denied this!

Bela Lugosi Learned To Pronounce Lines Phonetically Before He Could Speak English.

It’s tough to imagine the infamous vampire without giving him that characteristic accent. This, of course, derives from Lugosi’s portrayal of Dracula, but the Hungarian also found that his background caused unique problems for his acting career.

When he began to make a name for himself as an actor, he struggled with the English language. When starring in Broadway’s “The Red Poppy,” one of his first big performances, he had only the most tenuous grasp of the language. Nevertheless, with some tutoring, he was able to memorize the pronunciation of his lines, delivering them even though he didn’t truly understand the words he was saying!

Though Lugosi’s life wasn’t all glamor (actually, far from it), with his success came some impressive shoulders to rub. In one instance, he was once photographed with Mr. Believe It or Not! himself, Robert Ripley!

For almost a decade, Ripley owned a boat he named the Mon Lei (“Infinity”). This remarkable craft hosted some lavish events during Ripley’s time with it, and Lugosi was in attendance at one of them! “Lugosi’s charm and personality even took him to a 1947 cocktail party aboard a Chinese junk to swap “Believe It or Not” stories with Robert L. Ripley,” writes Gary Don Rhodes in his Lugosi: His Life in Films, on Stage, and in the Hearts of Horror Lovers. 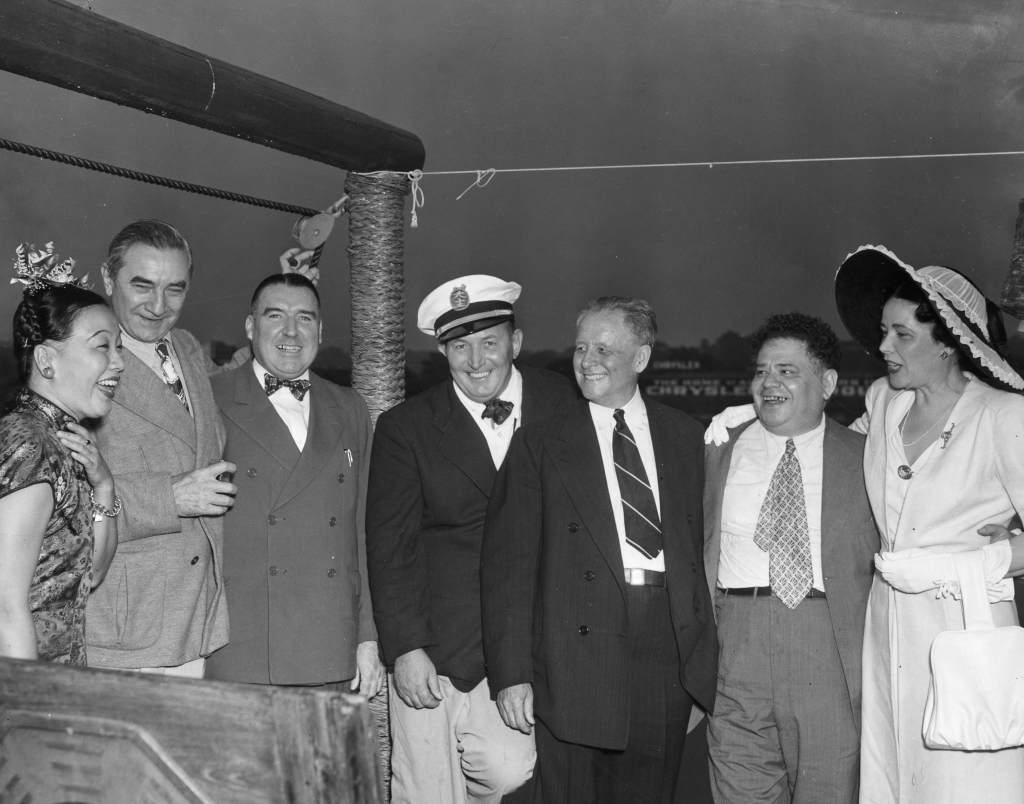 Bela Lugosi (second from left) at one of Robert Ripley’s parties aboard the Mon Lei.

Lugosi Was Once Honorary President of the Los Angeles Soccer League.

Even the most revered and prolific actors have lives and passions outside of the craft. One of Lugosi’s perhaps unexpected interests is the sport of soccer.

Though he was granted American citizenship in June 1931, Lugosi never forgot his Hungarian roots. According to his son, Bela Lugosi Jr., his father was a supporter of Los Angeles’ Hungarian soccer team, the Magyars. He even had a brief stint as the president of the Los Angeles Soccer League in an honorary capacity.

Bela Lugosi Was Part of the Hungarian Army’s Ski Patrol in World War I.

Lugosi was a man who lived a tumultuous life in a tumultuous time. Having been born in 1882, his adulthood was blighted by the horrors of World War I.

As a stage actor at the outbreak of the conflict, his profession rendered him exempt from conscription, but he joined the Hungarian army voluntarily. He fought Russians near Austria’s border as part of the Hungarian ski patrol.

He Married Five Times Over the Course of His Life.

Lugosi’s career was certainly eventful in all kinds of ways, and with that tends to come a “colorful” personal life.

Bela Lugosi was married five times, his first wife being IIona Szmik, whom he wed in 1917. The pair divorced in 1920 (allegedly following a conflict with Szmik’s parents), and he married again to IIona von Montagh a year later. This marriage, too, lasted for three years, before he parted with his next wife (Beatrice Weeks) after four months. Fourth came Lillian Arch, with whom he had son Bela Lugosi Jr. before the pair separated. Finally, Hope Lininger and Lugosi were married for just a year before the actor’s death in 1956.

Lugosi had a rather strained relationship with Boris Karloff, another legend of Universal’s classic monster movies. Karloff, fans will know, was a British actor who came to define Frankenstein’s Monster just as much as Lugosi did with Dracula.

In multiple productions together, Karloff claimed top billing, much to Lugosi’s chagrin. Interestingly, though, it’s said that the charismatic Hungarian had an opportunity to play the role of the iconic monster before Karloff! After Dracula, Lugosi was offered the lead role in Frankenstein by Carl Laemmle Jr., but he refused it. Frankenstein’s Monster, he is said to have sneered, was a part that “any half-wit extra” could have played!

Bela Lugosi Really Was Buried in a Dracula Cape.

Lugosi, from his mannerisms to his accent (and even unfortunate typecasting), became the infamous Count Dracula. One of the most enduring tales about the actor is that he requested to be buried in one of his trademark capes and that his family obliged.

In truth, however, that’s not quite how it happened. Lugosi passed away of a heart attack on August 16, 1956, and was buried in Los Angeles’s Holy Cross Cemetery. He was indeed buried in a Dracula cape, but it seemed that he didn’t request this. Instead, it was his wife and son’s idea. Lugosi would have wanted it this way, they stated.

Next post On A Roll With Freestyle Skater, Vasilisa Maslova

Previous post The Prequel To Pancakes: A Recipe From Ancient Rome