The legend of Big Nose George and how he was turned into a pair of human-skin shoes. 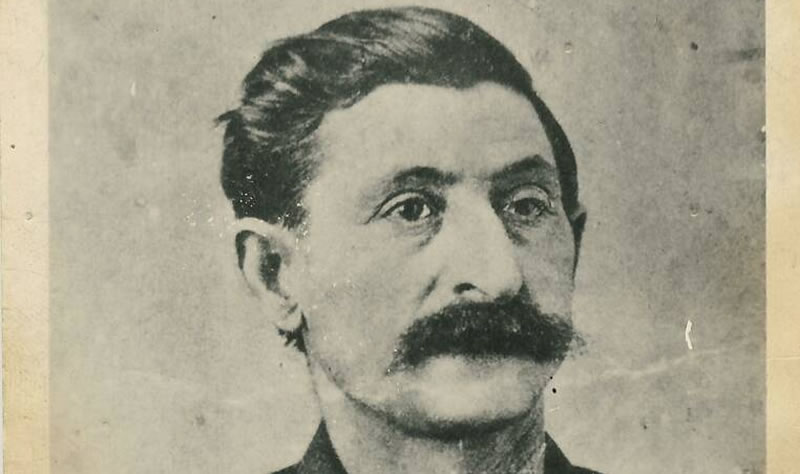 The legend of George is astounding, it’s unbelievable, and it’s also true.

America’s Folklore is rich in myths and legends. Everyone’s heard stories of Paul Bunyan and John Henry. But has anyone heard of Big Nose George? 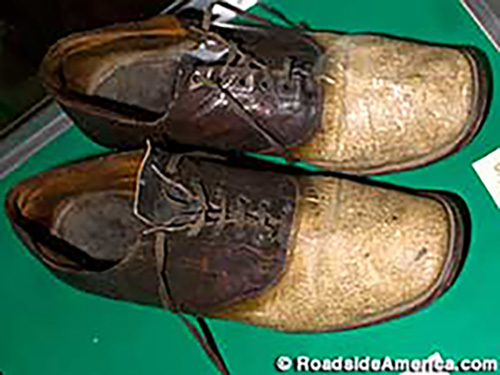 Shoes made of human skin

George Francis Warden a.k.a. Big Nose George was a horse thief and train robber in the 1800s. George and his gang were active in the Powder River country, robbing pay wagons and stages of cash shipments and relieving passengers of their money and jewelry.

One day in 1878, they planned to derail and subsequently rob a train. A section crew for the train company had ridden ahead to inspect the tracks. Seeing what the outlaws had done, the crew was able to stop the train, fix the tracks, and go about their business with no one getting hurt.

George escaped and ran off to perform crime elsewhere, but his mouth was a big as his nose.

After a bit of bragging about the things he’d done, George was captured, and sentenced to hanging.

This is where Big Nose George’s story gets weird.

George’s date of execution was set, but he had no interest in being killed by the state. He tried to escape, and in the process, he attacked and seriously injured one of his jailers. The inept criminal that he was, his escape attempt was stopped quickly, and he was led back into his cell at gunpoint.

Once citizens got word of the trouble he was causing, they decided to take matters into their own hands and lynch George instead of waiting.

The angry mob was about as good at lynching as George was at crime; they botched the first two attempts to hang him. Third time’s the charm, though, and eventually George was swinging from a telegraph pole.

After hanging up there for a few hours, George was most certainly dead. The undertaker brought him down and proceeded to bury him. But, as the legend goes, his nose was so big that it interfered with the lid of the coffin. Excess force was needed to close the lid, and needed to be nailed shut.

Before the final nail was put in the coffin, a couple of local doctors, Thomas Maghee and John Osborne, stole George’s body and hid it in a whiskey barrel!

According to Ilene Hanson, an assistant at the Carbon County Museum where the Big Nose George exhibit can be found:

Dr. Maghee wanted to study the criminal brain because his wife was criminally insane from a couple of horseback riding accidents. He was hoping he could help his wife.

While grave robbing in the name of science may not be the best course of action, it’s certainly understandable. Their attempt at research explains why George’s body was taken, and his brain was cut into …  but what about turning his nose skin into shoes? Dr. Osborne takes the credit for that fashion statement. 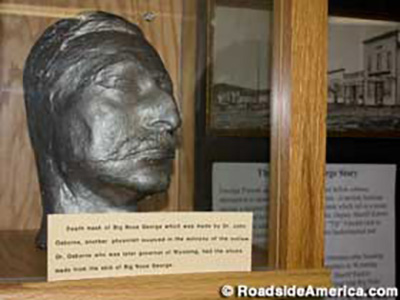 If Maghee’s actions were understandable, Osborne’s were just plain weird.

First, he molded a death mask of George’s face using plaster of Paris. Next he skinned George’s thighs and chest and sent the skin to a tannery with instructions to turn the skin into a pair of shoes and a medicine bag.

What could have driven Dr. Osborne to these acts?

While Maghee seems to have been interested in science, Osborne’s motivations were more petty and spiteful.

He was on a train that George had delayed once, and because of the delay, Osborne missed a party.

In spite of his odd behavior, Osborne went on to have a prosperous life. He was elected the first Democratic Governor of the State of Wyoming and even wore the shoes to his inaugural ball. Later, he became the assistant Secretary of State under President Wilson.

Most of the items associated with Big Nose George’s story can be found on display at the Carbon County Museum in Rawlins Wyoming. Everything except George’s skull cap, which apparently was given away and ended up being used as an ashtray.

For stories about American roadside attractions and more stories like George’s, head over to Roadside America. 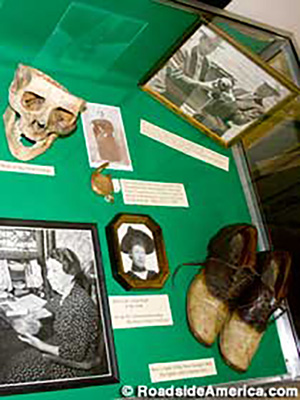 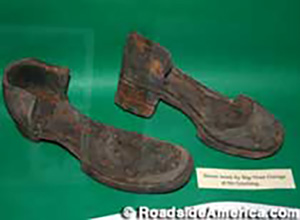 The shoes George wore while hanging

Next post Reagan and Gorbachev Agreed to Fight Aliens Together

Previous post Be-Leap it or Not! A Brief History of Leap Year