Thieves made off with so much gold, they were simply dumping it to get away. 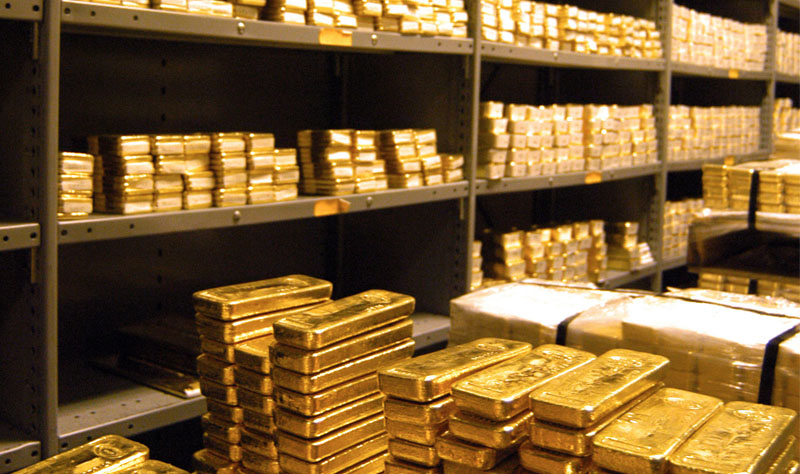 Just like the loose change in the couch cushions or floor of your car, these historical heists have little chance of ever being found.

In the waning days of the Civil War, the President of the Confederate States of America, Jefferson Davis learned from General Lee (not the cool car from that show, but the actual General…Robert E Lee) that the Northern armies could no longer be contained, and that the capital of the Confederacy—Richmond Virginia—needed to be evacuated immediately. With the Northern armies pouring into Virginia, Davis loaded two trains with as much silver, gold, and other valuables from the Confederate Treasury as he could—headed southward into the interior of the Confederacy on the only train line still under its control. 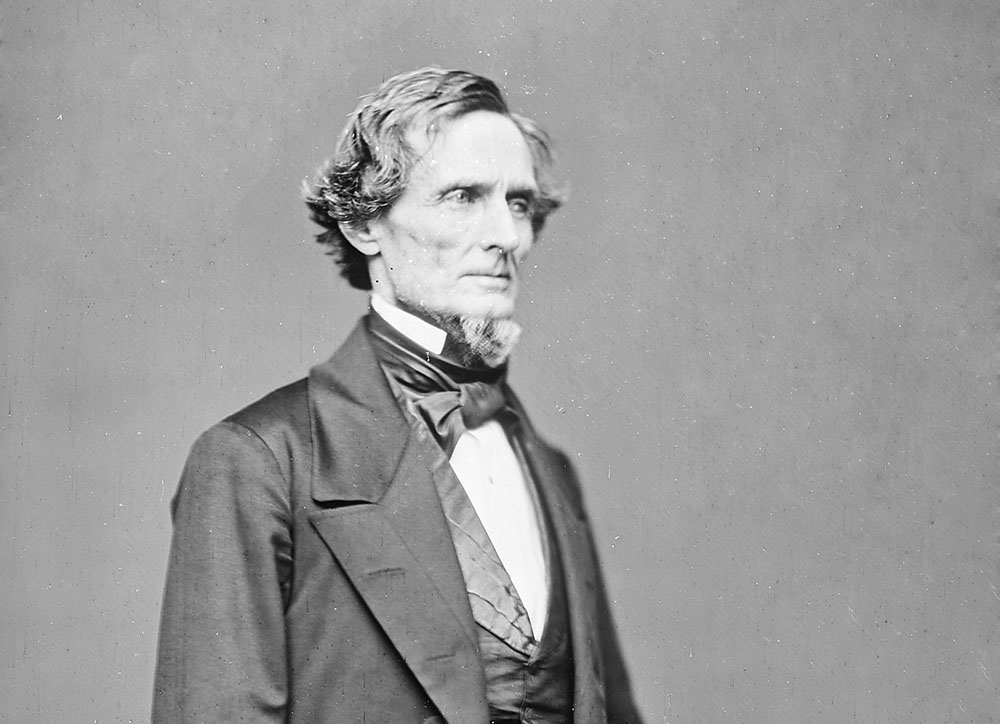 The two trains left Richmond at midnight and came to the end of the line in Danville, Virginia, nearly 150 miles away.  From there, the Treasury was moved onto wagons and escorted on horseback by Navy Captain William Parker.  Their destination?  The US Mint in Charlotte, North Carolina.  It would be a short trip, however; the US Cavalry had already taken control of the city.  To evade capture, the Treasury was put under the supervision of General Basil Duke and transferred onto six different wagons for the trek further south into the Confederacy.

The “money train” would only make it as far as Washington, Georgia.  It was there that Jefferson Davis, his staff, and the bulk of the treasury would be taken by Northern forces. 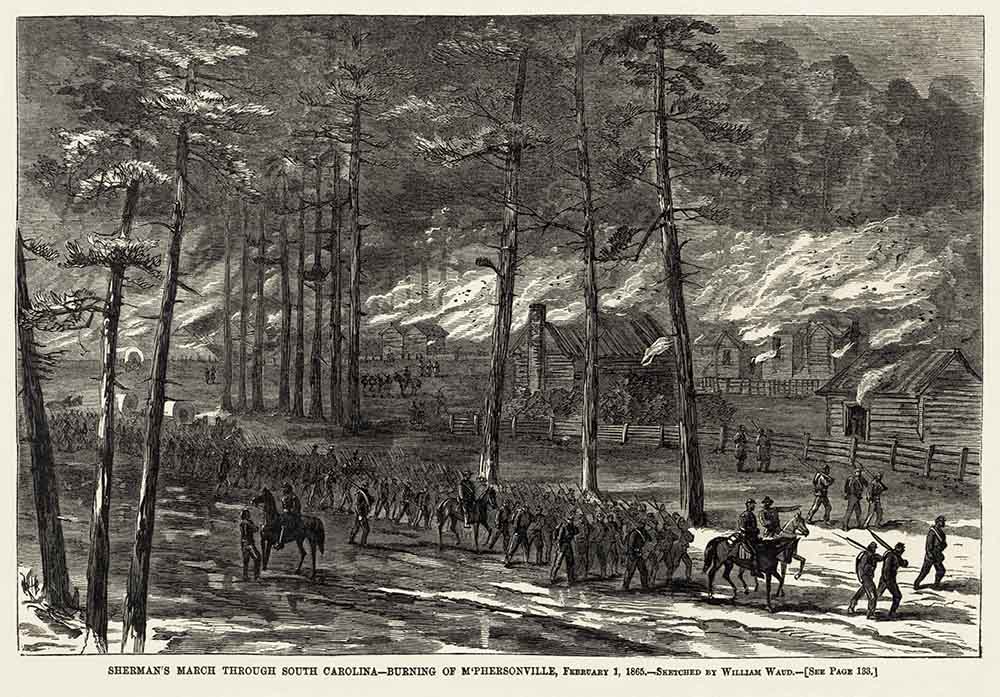 On the Confederate Treasury’s way back to Washington DC—now under the control of the North—the new caravan of gold-filled wagons was bushwacked.  Literally.  The bushwhackers, so called for the guerrilla tactics of hiding in the bush, were stragglers from the Confederate army, as well as the North and attacked the wagons in Wilkes County, Georgia.

With bags and sacks filled to the brim with gold and silver, the group made off with the loot into the wilds of Wilkes County.  Legend has it that the bushwhackers had taken so much money that they were unable to carry it all, leaving large amounts of gold and silver hidden, buried, or simply discarded across the county’s 474 square miles.

Theories abound as to where all the money could have ended up. Some think it might be in Wilkes County, hidden in plain sight, or dumped in Lake Michigan, with new leads popping up regularly.  To this day, no sight of the bounty has been made.

All that Glitters isn’t Just Gold

Considered one of the “Eight Wonders of the World,” the Amber room was a chamber originally constructed in the 1700s that had enough glitz to make even the most opulent millionaire jealous. 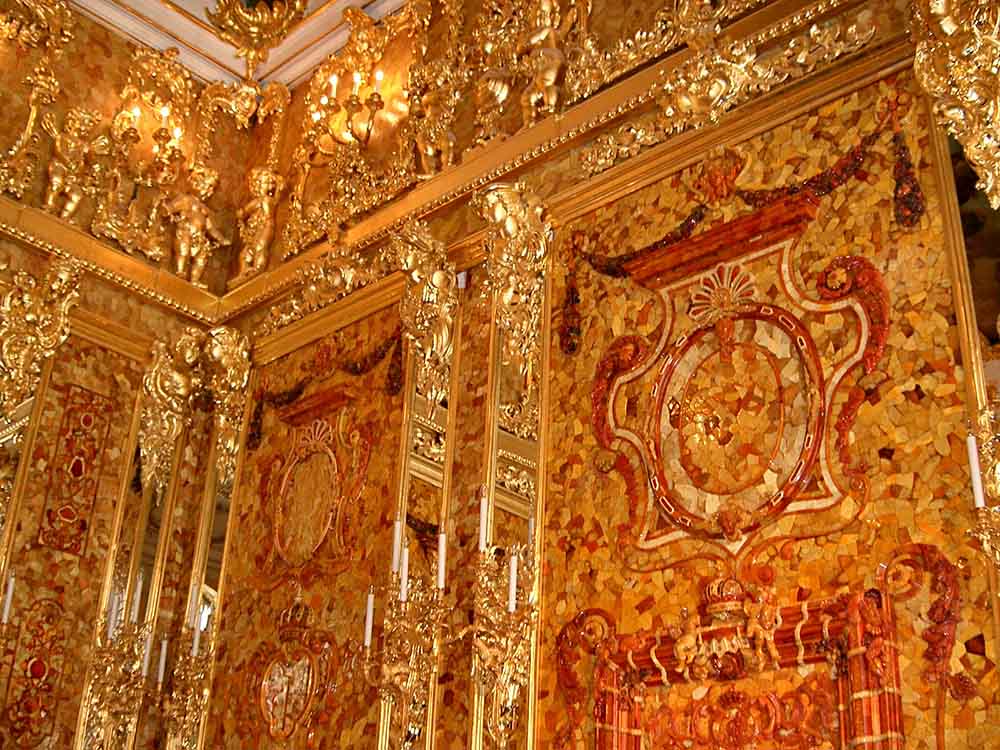 Designed in 1701 for the Charlottenburg Palace in Berlin, Prussia, the room would eventually measure 590 square feet and contain over 13,000 pounds of amber.  This room didn’t stay in one place, either.  It made its way around Europe like a college kid on summer break, installed at Berlin City Palace until 1716. It was there that Peter the Great, the Czar of Russia first laid eyes upon it, admiring it longingly.  Learning of Peter the Great’s fascination with the Amber Room, Frederick William, the son of King Frederick, gave the room in its entirety to the Russian Czar. In its move to St. Petersburg, Russia, the Amber Room was reworked and installed into Catherine Palace, where it would remain until World War II. 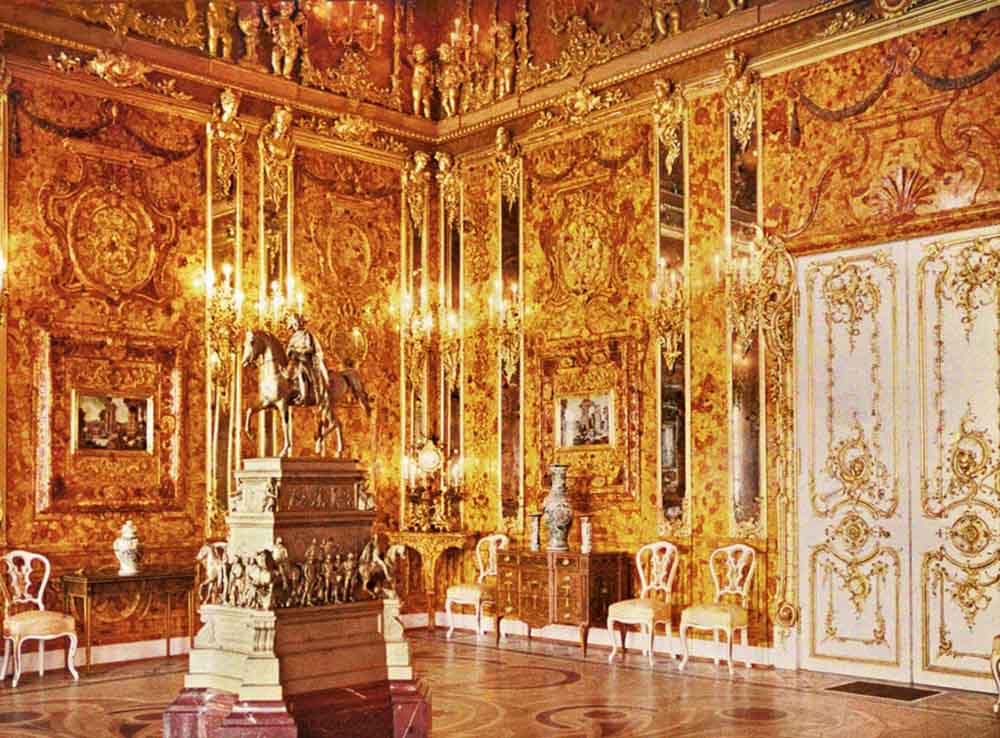 In June of 1941, Nazi Germany began the invasion of Russia.  With Nazi soldiers just days away from St. Petersburg, Russian curators of the Amber Room did their best to hide it, covering the glittering walls with ordinary wallpaper. Once the Palace was seized, however, the Nazis disassembled the Amber room in less than 36 hours, shipping it to Königsberg, a town in East Prussia, where it was put on display.

As the war progressed, the allies were closing in on Germany, and the Amber room was once again crated up—this time sent into the bowels of the castle.  In 1944, Allies bombed Königsberg, destroying not only the town, but the castle as well.  This was the last time the room was seen.

Though some think the crates were simply destroyed in the bombings, others believe the Amber Room is buried away in modern-day Königsberg. Some say the crates containing the room were boarded onto a ship that was last seen crossing the Baltic Sea.  Perhaps the most cunning theory to the room’s whereabouts, though, is that the Amber Room is still in Russia and that the room the Nazi’s stole during WWII was just a fake.

Königsberg before the bombing.

D. B. Cooper the Skyjacker

On November 24th, 1971, Dan Cooper, boarded Flight 305 on a Boeing 727 headed to Seattle, Washington by way of Portland International Airport.  Described as an average male in his mid-30s somewhere in the 6-foot range, Cooper took his seat wearing typical salesman attire of the day:  a dark suit, white dress shirt, dark tie and black briefcase.  Shortly after the plane took off at 2:50 pm, the flight crew discovered Cooper wasn’t a salesman at all. 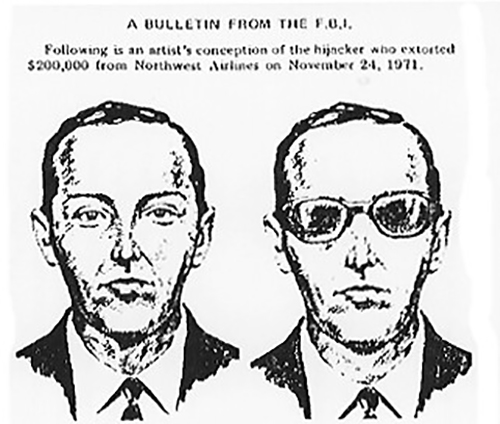 Not long after take-off, Cooper made his intentions clear:  He was hijacking the plane and its 36 passengers.  Quickly opening his briefcase for flight attendant Florence Schanffner to see the apparent bomb within, Cooper demanded that there be $200,000, four different parachutes and a fuel truck waiting for him at Seattle’s airport when they arrived.

At 5:24 pm, after the FBI and local authorities scrambled to meet Cooper’s demands, Flight 305 landed at Seattle-Tacoma airport.  The ransom and the chutes were delivered to the plane, the passengers and attendants were released, and the aircraft was re-fueled.  Cooper insisted the flight crew stay on board, locked in the cockpit for Cooper’s next destination:  Reno, Nevada then onto Mexico City.

The 727, along with Cooper and key members of the flight crew, took off around 7:40 pm, the plane being was tailed above and below, undetected by F-106 fighter jets.  Twenty minutes into the flight, the crew, still locked in the cockpit, detected massive depressurization in the rear of the plane.  At approximately 8:15 pm, the 727’s rear section took a sudden upward movement, causing the pilots to quickly readjust the plane’s bearing.  After that, and for the next 2 hours, the rest of the flight remained suspiciously quiet.

At 10:15 pm, the 727 landed as planned at Reno Airport.  With the jet surrounded by officials of just about every level of law enforcement, the jet was boarded and searched, but Dan Cooper was gone.

As to what happened to DB Cooper and the ransom money, plenty of theories exist.  The marked bills given to Cooper remained out of circulation for years.  In February 1980, a family vacationing in Vancouver, Washington uncovered three packs of bills on a riverbank of the Columbia River.  Authorities determined the bills were part of Cooper’s ransom.  The discovery, though, created more questions than answered, especially since the bundles of cash were still in the same sequential order given to Cooper, with the exception of 10 missing bills.

In July of 2016, the FBI suspended the investigation of Cooper indefinitely, citing lack of resources and the need for manpower elsewhere.  Over the years, bits and pieces of evidence from Cooper’s heist have been unearthed, but nothing that tells the whole story. With his extensive knowledge of airports and flight protocols, Cooper was likely to have been an Air Force Veteran.  Even with that vast knowledge, the FBI suspected that Cooper didn’t survive the jump out of the plane.  Based on the conditions that night, the plane’s altitude and the Cooper’s choice of parachutes, it would have been a jump that even a skilled parachutist would have avoided. 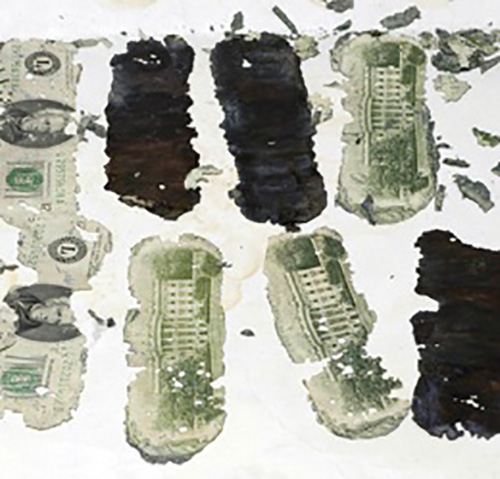 The King of Cocaine

On December 2, 1993, 16 months after his escape from La Catedral prison, Pablo Escobar, the King of Cocaine, was shot to death in a shoot-out with authorities.  At the time of his death, his personal net worth was estimated to be well over 30 billion dollars. 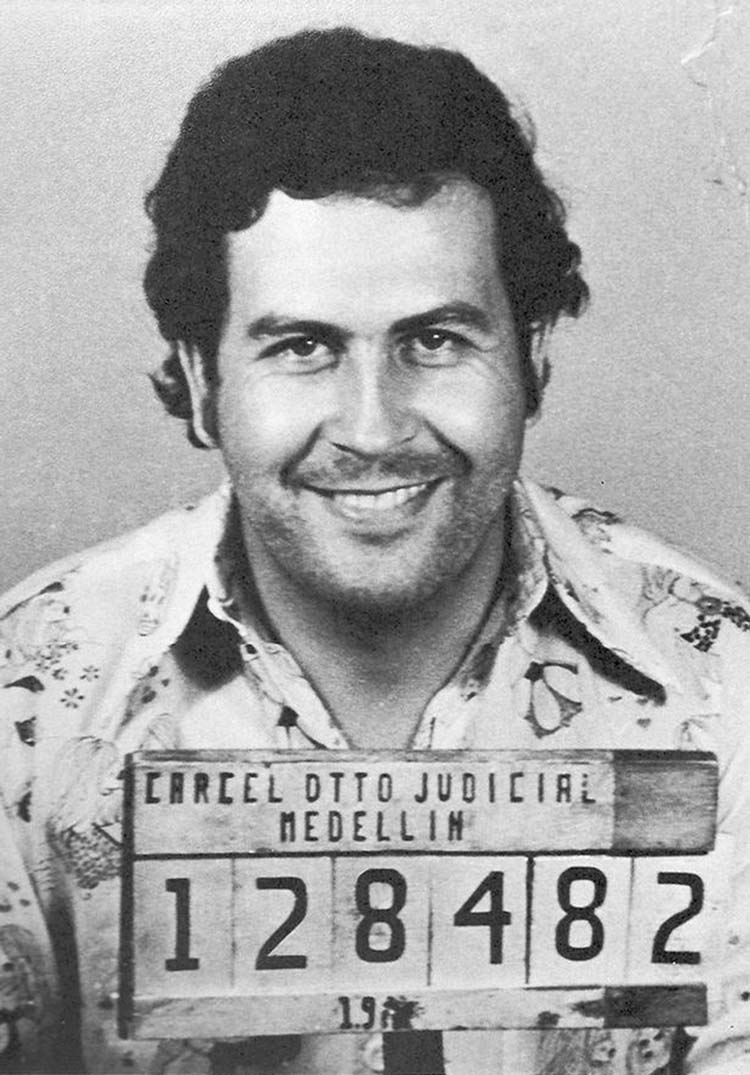 Born on December of 1949, Escobar came into prominence in the 80’s by smuggling tons of cocaine into the US, first by flying planes out of Colombia and Panama, and later by taking over established routes and distribution networks.

After his death, authorities quickly began confiscating Escobar’s assets.  His large collection of luxury cars, houses, estates, bank accounts—anything in his name was seized.  All of this was just the tip of the iceberg according to Escobar’s brother and accountant, Roberto Escobar.  Roberto revealed in a 2009 book Escobar:  The Untold Story of the World’s Most Powerful Criminal, that there were still millions of dollars of Pablo’s vast fortune unrecovered.

In 2015, a Colombian farmer reportedly found 600 million dollars believed to be part of Escobar’s fortune buried in a field near Medellin, Colombia.  The farmer came stumbled across the loot, comprised of hundreds of barrels of cash when prepping the land for farming.

600 million dollars, however, is only a small fraction of the 30 billion dollars Escobar is claimed to have accumulated.  According to Roberto Escobar, his brother’s money is held in secret bank accounts all over the world, so many that even he doesn’t know all about them, stating:  “I am also certain there are bank accounts in countries whose numbers have been lost and forgotten and never will be opened again.”

The Heathrow International Trading Estate, located near the Heathrow Airport in West London, looks like any other warehouse in the world, with non-descript grey aluminum siding and oversized garage doors all surrounded by a worn concrete slab.  On November 26, 1983, though, it would become the site of one the world’s biggest heists.

The loot, held at the Brink’s-Mat warehouse located in the Heathrow International Trading Estate, comprised of over 34 million dollars worth of gold bullion, diamonds, and cash. Just six robbers made off with all of it.

The group gained access to the warehouse, by security guard Anthony Black.  From there, the robbers gathered the remaining staff, poured gasoline all over them and threatened to light them on fire if they didn’t reveal the combination to the vault within the Brink’s-Mat Warehouse.

Instead of getting 4.2 million dollars in cash, as the group had anticipated, they got so much more.  Along with the expected cash was over three tons of gold bullion, owned by Johnson Matthey—a British multinational company.  The gang lifted as much as they could, eventually walking away with £26 million (34 million dollars) in valuables.

In the succeeding months, the security guard, the security guard’s brother-in-law, and two of the three thieves would be convicted of the crime.  The other four robbers were never convicted, and most of the gold was never reclaimed. The group smelted down and recast as copper coins to fool authorities.  Gold experts today believe that more than half of the gold stolen has been recirculated back into legitimate gold markets, making it indistinguishable from its original from.

Rumors across London say that a major portion of the Docklands, a popular tourist spot on the River Thames, was bought up using the gold in the 80s and 90s.  While others believe the dirty gold was used to buy a portion of land from England’s Cheltenham Ladies College and built up into apartments.  As for the rest of the bounty, its out there somewhere, probably next to all that Confederate gold and Escobar fortune.