A black-footed ferret named Elizabeth Ann makes history as the first successful cloning of an endangered species in the United States. 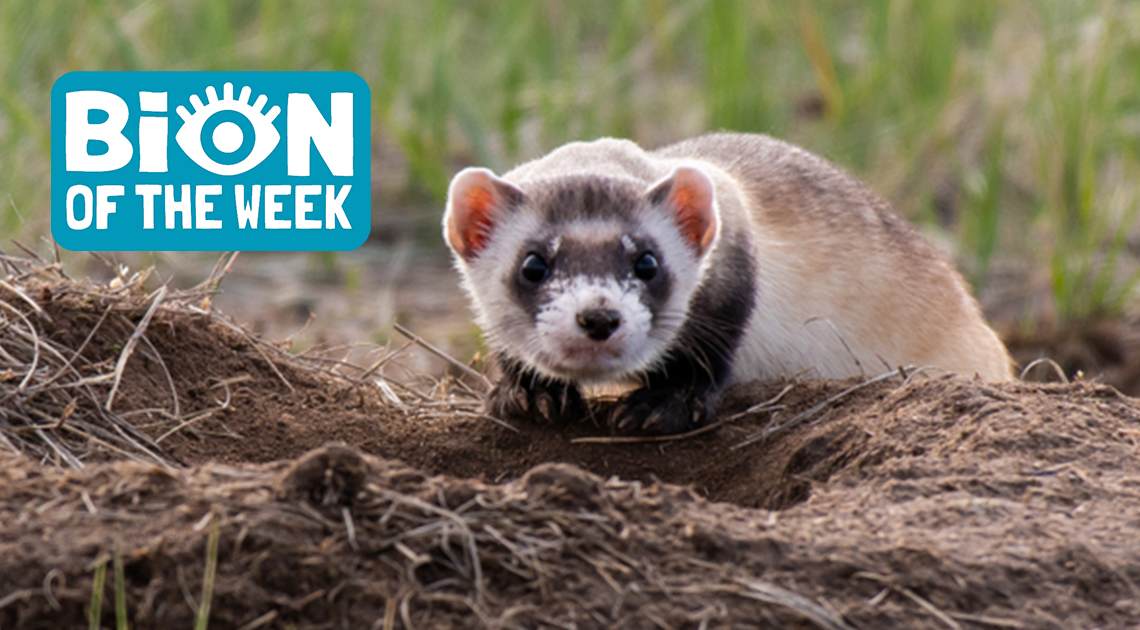 [February 22–February 28, 2021] A bathroom bear attack, cliff-diving coffins, and a secret message from space—all round-up in this week’s weird news from Ripley’s Believe It or Not!

Braving the backcountry backfired on a woman in Alaska when she was attacked by a bear while using an outhouse!

Shannon Stevens was staying at her brother’s yurt in the Alaskan wilderness when she made her way to the resident outhouse. The experience quickly turned from relief to panic when a bear lunged up from below and bit her the backside before she even had a chance to sit down fully. She immediately jumped up, screamed, and got the heck out of there.

Hearing screams from the outhouse, Steven’s brother, Erik, rushed down to check on her, assuming a squirrel or a mink had bitten her. Instead, he found her tending to a bear bite, and the duo rushed back to the safety of the yurt.

When they emerged the next morning, there were bear tracks everywhere, including leading to the outhouse’s back door. 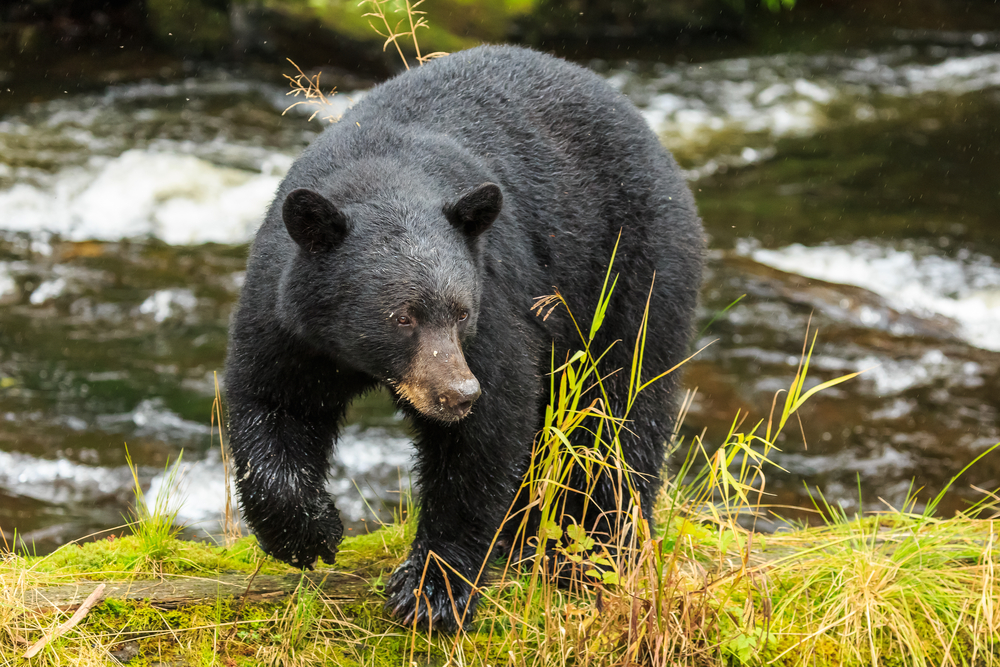 Hundreds of coffins crashed into the Ligurian Sea on Monday after a landslide on the Italian coast caused a cemetery to collapse.

An estimated 200 coffins plunged into the waters when the 100-year-old Camogli cemetery fell victim to a landslide after maintenance workers along the coastline discovered cracks in the rocks.

Only ten coffins have been recovered thus far, but local officials hope to find more in the upcoming days.

The cemetery, which rested on a rocky coastal cliff near Genoa, was closed on Saturday after workers noticed fissures nearby.

A team of geologists was called in to investigate the damage using drones to see if they can find other areas of concern, but the fragile nature of the shores will make it hard to determine.

The coastal area near the cemetery has been blocked to prevent the coffins from driving out to sea.

Around 200 coffins have fallen into the Ligurian sea after parts of an Italian cemetery collapsed in a landslide. https://t.co/aO7G9hFUG4 pic.twitter.com/1bL5ix2iVc

It’s peak travel-season for Mars, as conditions this month have been perfect for exploration. But what’s the fun of sending a rover to space if you don’t throw in a secret message for the ride?

Detectives of the World Wide Web were quick to notice a secret code flashing from the parachute of NASA’s perseverance rover as it plummeted through the atmosphere of Mars on February 18.

Viewers couldn’t help but notice that the parachute’s flashing red-and-white stripes seemed to be telling us something. It took only six hours after NASA scientists confirmed that there was, in fact, a message in the patterns on Monday, for people to crack the code. 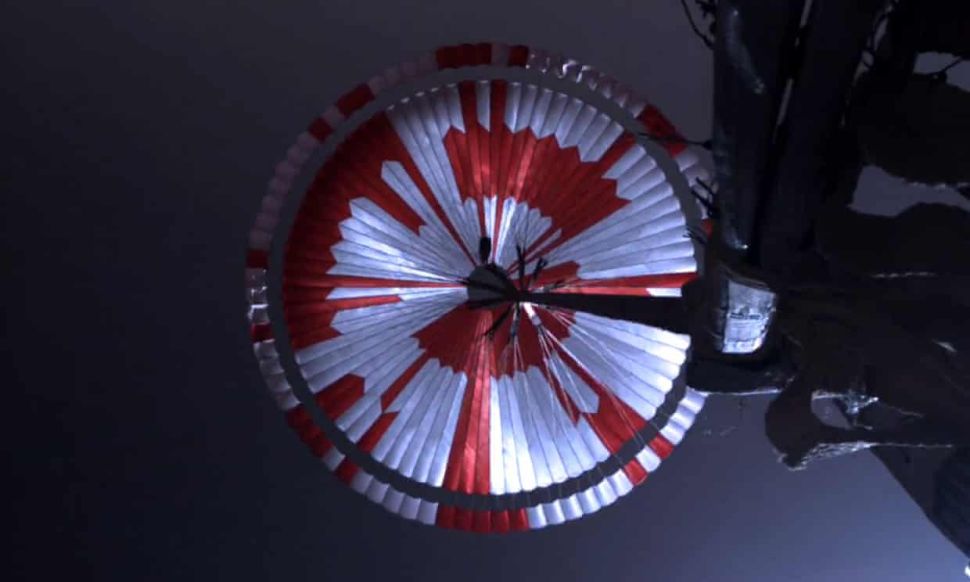 NASA Mars 2020 mission members hid a secret message in the parachute that landed Perseverance on the surface of Mars. (Image credit: NASA|JPL)

Allen Chen, the Perseverance’s lead systems engineer, has also suggested that there are other secret messages ingrained in the rover’s coding, which “will never be known—even by me.”

Scientists are flipping out over the discovery of a yellow-pigmented penguin photographed on the shores of South Georgia Island.

Belgian photographer, Yves Adams, captured the shot of the yellow-tinged King penguin after landing on the beach during a two-month expedition back in December 2019. He waited to share the image with the world until earlier this month when he posted it on his Instagram.

Since penguins are typically known for their black-and-white appearance, this brightly-hued bird stood out in the crowd, with Adams describing the scene as “chaos full of sea elephants and Antarctic fur seals, and thousands of other king penguins.”

For a penguin to have any kind of pigment anomaly is rare, but when they do, they’re typically all black, all white, or a mix of the two. Without physically studying this sunshiney specimen, scientists are left to speculate the cause of its unique appearance, with much discussion about whether what level of melanin deficit it exhibits.

While this penguin is pretty, there is concern that its coloring will ostracize it from its community, as penguins are relatively superficial creatures who choose mates based on appearance. Safety is another concern for this lone King since its coloring may not protect it from the sun and predators like standard penguin tuxedos do.

Black-Footed Ferret Lives on Thanks to Cutie Clone

Though believed to have gone extinct as recently as the 1980s, the black-footed ferret lives to see another day through the first successful cloning of an endangered species in the United States—a little lady named Elizabeth Ann!

After being declared extinct in 1979, the black-footed ferret was put back on the endangered species list by 1981, when a small group was found taking up residence on a Wyoming farm. Environmentalists were quick to relocate the population for breeding, but only seven were able to reproduce. There are currently 650 living black-footed ferrets in the U.S., all descending from these special seven.

As the species’ lack of diversity continued to threaten their existence, scientists searched for alternative methods to regenerate the population, ultimately deciding that cloning was the way to go. Fortunately, the San Diego Zoo Global project anticipated this very event decades ago when they began collecting and freezing tissues from endangered species and ended up providing the tissue of a female named Willa for the project.

Cloning the female ferret was no easy feat, with researchers from the U.S. Fish and Wildlife Service, Pets & Equine, The Association of Zoos and Aquariums, San Diego Zoo Global, ViaGen, and Revive & Restore joining ranks to save the species.

Elizabeth Ann is the first of many planned clones that will be critical in building diversity in the black-footed ferret population. As for Willa, she may have died over 30-years-ago, but somewhere up in ferret heaven, she gets to celebrate potentially saving her entire species.

Next post The Fascinating (And Sometimes Bloody) History Of Roller Coasters