The infamous stunt involved a steam train traveling across a burning bridge. 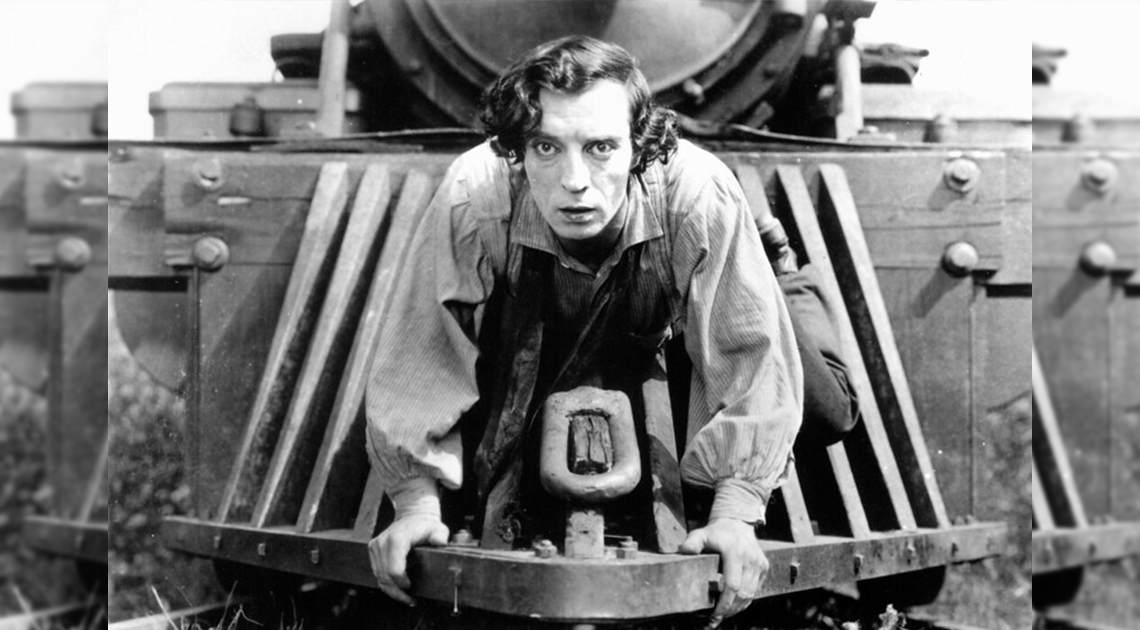 In 1926, comedian, writer, and director Buster Keaton made a film titled The General, which featured a stunt involving an actual train falling from a burning bridge into a river. The spectacular stunt cost $42,000 to make—a huge amount at the time. In today’s dollars that would be the equivalent of more than $600,000—making it the most expensive stunt in the history of silent film.

By the time Keaton made the movie, he had already cemented himself as a stunt master alongside icons such as Charlie Chaplin and Harold Lloyd. Studio executives obviously had confidence in the 30-year-old’s abilities because they gave him the go-ahead to shoot such an expensive scene. However, it had to be recorded in just one shot. Keaton didn’t have the budget to build a new bridge, procure a new locomotive, or do the stunt more than once. The first and only shot had to be perfection.

The General was a comedy/romance/drama about the Civil War. Most of the movie was filmed in Cottage Grove, Oregon, where an entire town was constructed just for the movie. Keaton was heavily involved in the production and did everything from writing the script to directing the stunts, according to Alta. In the process, he had to deal with a range of issues, including lawsuits, forest fires, and budget problems.

The infamous stunt involved a steam train traveling across a burning bridge, and the goal was for the trestle to collapse in just the right spot so the train would fall spectacularly into the Row River. The town of Cottage Grove declared the day of filming a holiday so thousands of locals could watch the action. Keaton set up several cameras in the surrounding area to ensure that he had the right angle.

The good news is that Keaton was experienced at stunt work, so he knew what he was doing. He often performed stunts that other people would never conceive of attempting simply because they were too dangerous or ridiculous to consider. One of his most famous stunts took place in Steamboat Bill, in which Keaton avoided being struck by a collapsing building by “escaping” through a tiny window. Despite his skills, over the years he was injured numerous times; he broke bones, almost drowned, and severely damaged his neck.

In The General, Confederate train engineer Johnny, played by Keaton, plots to retrieve a train that had been stolen by Union spies. In order to get it back, Johnny sets a bridge on fire and a pursuing Union train races over it. The bridge collapses, as planned, and the locomotive falls into the river.

Keaton chose to make the film after reading about the Andrews Raid, which took place in 1862. A Union raiding party overran a steam train called The General and tried to outrun pursuing trains while passengers were on board. The party left chaos in their wake and even tried burning down a bridge. Unfortunately, Confederate troops caught up with them after chasing them for 87 miles.

As for the movie’s infamous train chase, Keaton and his crew decided to film it just east of Culp Creek, Oregon. They spent two weeks building a 215-foot-long trestle over the Row River, which had rapids and sloping river banks. They made the water deeper by building a dam. On the day of the infamous shot, Keaton made sure the cameras were properly in place and did a few trial runs. The bridge’s supporting timbers were then partially sawed in half, and dynamite was attached to them. Four hours after the scheduled shoot, the action started.

Keaton gave an engineer the go-ahead, and the locomotive started chugging towards the bridge. Keaton’s wife allegedly prevented him from driving the train (which apparently, he was eager to do), so the engineer had the job of jumping out of it. A papier-mâché dummy acted in his stead at the controls. Incredibly, Keaton and the crew pulled off the stunt, with the bridge crumbling below the train just as the entire locomotive was above the water. The resulting scene is jaw-dropping.

Despite the inclusion of the history-making stunt, The General failed to resonate with audiences, and Keaton lost creative control over his subsequent films after studio execs decided to rein in his spending. The entire production had an initial budget of $400,000 ($5.7 million today) but wound up costing a total of $750,000 to make, and it lost money at the box office by generating just $500,000, according to Offbeat Oregon.

However, its significance revealed itself as time passed. When it was presented during a retrospective event at the Venice Film Festival in 1965, the movie received a standing ovation. Orson Welles lauded it as a masterpiece. Years later, Hollywood recognized the historical impact of the movie, and it was placed on the U.S. National Film Registry in 1989. Today it is considered one of the greatest silent comedies of all time.

As for the location of the stunt, as of 2007, you could still see some track and steel remnants from the production in the river when the water level was low.