This Camera-Eye Will Leave You with a Different Perspective

Try not to blink. 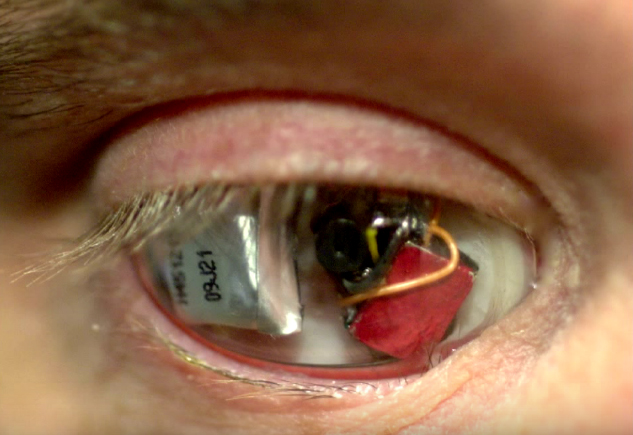 Via TEDx Talks TEDXBrussels - Rob Spence - Eyeborg, the Enhanced Self

Rob Spence, a Toronto filmmaker, has replaced his eyeball for a camera-eye. Talk about loving your craft. Spence lost sight in his right eye at the tender age of nine. The shooting accident happened on his grandfather’s farm when he incorrectly fired at a pile of cow manure. Yes, this is a fact.

Dubbing himself the Eyeborg, this isn’t the first time Spence has been making headlines. Back in 2009, he did replace his eye with a digital camera, but it was just a massive amount of electronics that sat in his socket. His creation was even named one of the “Best Inventions of the Year” by Time magazine. Spence and his team used cell phone camera technology when creating their first prosthetic camera-eye.

With technology ever-evolving, Spence has recreated his camera-eye to mimic a regular prosthetic. While this incredibly real looking eye isn’t connected to his optic nerve – no guys this isn’t The Terminator –  what the camera-eye “sees” can be viewed on a monitor. The camera-eye uses radio-frequency transmissions. It contains a wireless video camera that runs on a small three-volt battery. Unfortunately, he can only leave it in for three minutes due to overheating. Also, you can turn the camera-eye on and off with a push of a button.

How’s that for perspective?

Spence’s goal is to film people’s bionic body parts with his camera-eye. While he has for a documentary about cybernetics, Spence would like to shoot for hours at a time. He is determined to make his full-length documentary, filmed from his camera-eye, a reality.

We’re sure he’ll be back, baby.

Eyeborg is also now the subject of Showtime’s series, Dark Net. Trust us, it’s totally worth the watch.

Without a doubt, Eyeborg’s eye has raised many eyebrows when it comes to safety and privacy. Do you want a constant feed of your day to day life?