“Believe me, I didn't ask for this job.” 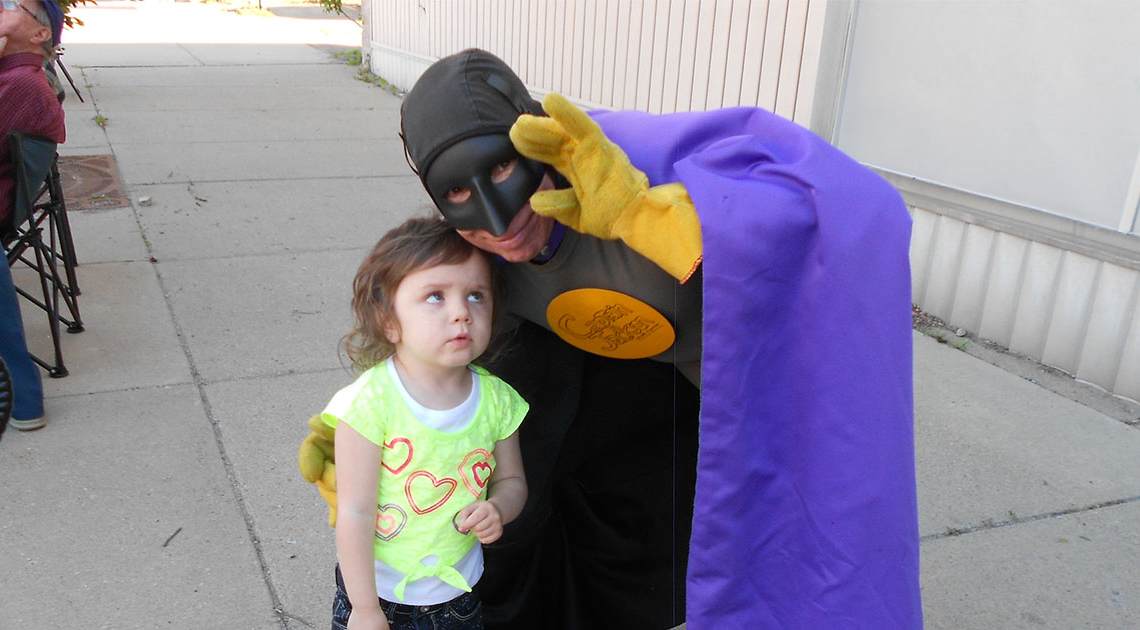 Villains anywhere near Michigan beware: Captain Jackson is out here, and he’s ready for battle.

This middle-aged man, decked out in a cape and cowl, has been fighting crime alongside local law enforcement for decades. Some think he’s a real hero. Others? Well, they think he’s a bit looney.

But Captain Jackson, whose sidekick is his daughter CrimeFighter Girl, says he’s been sanctioned by local police to help report crime and promote the city. He’s been featured in a French photo project on real-life superheroes, and on the nationally-syndicated talk show “Dr. Drew’s Lifechangers.”

Ripley’s sat down with him to discuss his origin, what he’s been able to do and how the public has reacted to him.

RIPLEY’S: Tell me a little about your history, and why you decided to help your local law enforcement? How long have you been doing this?

CAPT. JACKSON: I began this on Nov. 11, 1999, by calling into a local radio station, almost as a joke, and proclaiming myself to be Captain Jackson, Crimefighter, and that I came to Jackson to help rid the community of crime. To my surprise, over the next few days other people began to call in asking about me. Having grown up in the Detroit area where there were “beat cops,” those who would get to know their neighborhoods, and Jackson having none, I had the idea of Neighborhood Watch-type patrolling.

RIPLEY’S: How have the local folks responded to your participation? Specifically, the law enforcement officials and the local population as well?

CAPT. JACKSON: From the beginning, and to my surprise, the majority of the people I met were very positive about my intentions. Even the local police gave me encouragement almost from the beginning. Even to this day, if I see a crime and report it to 911, they seem to give my calls priority.

RIPLEY’S: How did you come up with the idea for the costume?

CAPT. JACKSON:  First of all, it’s a UNIFORM, and it really wasn’t my idea. My idea was to dress like a typical 1940’s detective like Sam Spade. However, people continued to call into the local radio show, and many assumed that with a name like Captain Jackson I must wear a cape, cowl, and mask, so I gave them what they wanted. And while my first uniform looked ridiculous, I was greeted with positive enthusiasm from the public. It wasn’t long before my 9-year-old daughter, Crimefighter Girl, joined. A year and a half later, out of the blue at a major downtown event, The Queen of Hearts (in full uniform herself) approached me and asked to join our cause, and hence The Crimefighter Corp was born.

RIPLEY’S: What do you do for your day job?

CAPT. JACKSON:  Yes I have a day job, but we don’t talk about that. While I have no idea how many people know my true identity, whenever I’m on patrol I’m only addressed as “Captain Jackson,” probably out of respect for what we have done for the community.

RIPLEY’S: What is a typical couple of hours like for Captain Jackson?

CAPT. JACKSON: It varies. I still work all the large events such as monthly car shows and occasionally do my regular patrols (checking doors, doing bar checks, etc.)

RIPLEY’S: Lastly, what has been your biggest adventure or contribution since you’ve been doing this?

CAPT. JACKSON:  As far as “adventure,” like a regular police officer, the job usually consists of mostly boredom. Oh, I’ve run into my share of petty criminals, nuts, drunks weirdos, etc., but anymore that is few and far between. As far as contributions, that would be working with the local citizens, business owners and police to turn the downtown loop area (at the time I started it was the center of the “hood”) into the most crime-free district in the city (according to police chief Ervin Portis in a public statement made in late 2004). Since then, just our presence on the streets seems to remind bad guys that downtown is not the area to commit criminal activities. 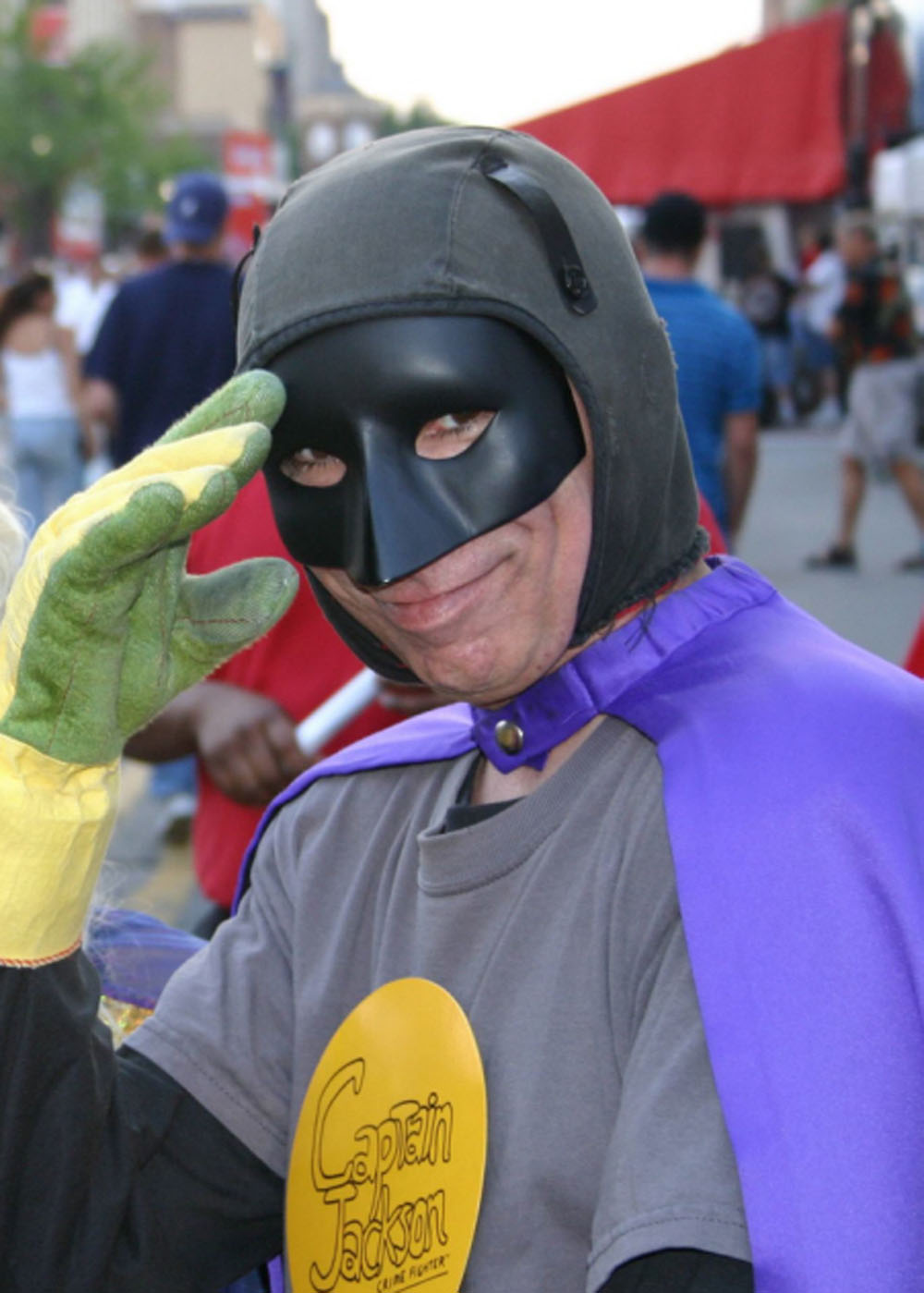 In an essay written in 2004, Captain Jackson described his role like this:

“As I tell people, this is a very DANGEROUS job. We deal with the same SCUM that the police do, and our lives are at risk every time we are on the street. Regardless, the community does depend on us, both for protection as well as PR.”

“Believe me, I didn’t ask for this job,” he continued. “It’s just something that happened to me one day. Five years ago I just wanted to make a difference. I wanted to bridge the ever-growing gap I saw between the police and the citizenry.

“And am I really a ‘Super Hero?’ By definition, yes,” he wrote. “Do I enjoy this title? No. I’ve always preferred ‘Independent Crime Fighter.’ Regardless, myself and my two sidekicks Crimefighter Girl and The Queen of Hearts have become known as Jackson, Michigan’s true Super Heroes. But in reality, it’s the local citizens, and police we work with every day that deserve such a title.”

Next post Mysterious Origins Of The Ekoi Skin Mask

Previous post The Half House Of Toronto Is Still Standing