Even P.T. Barnum tried to buy the giant. 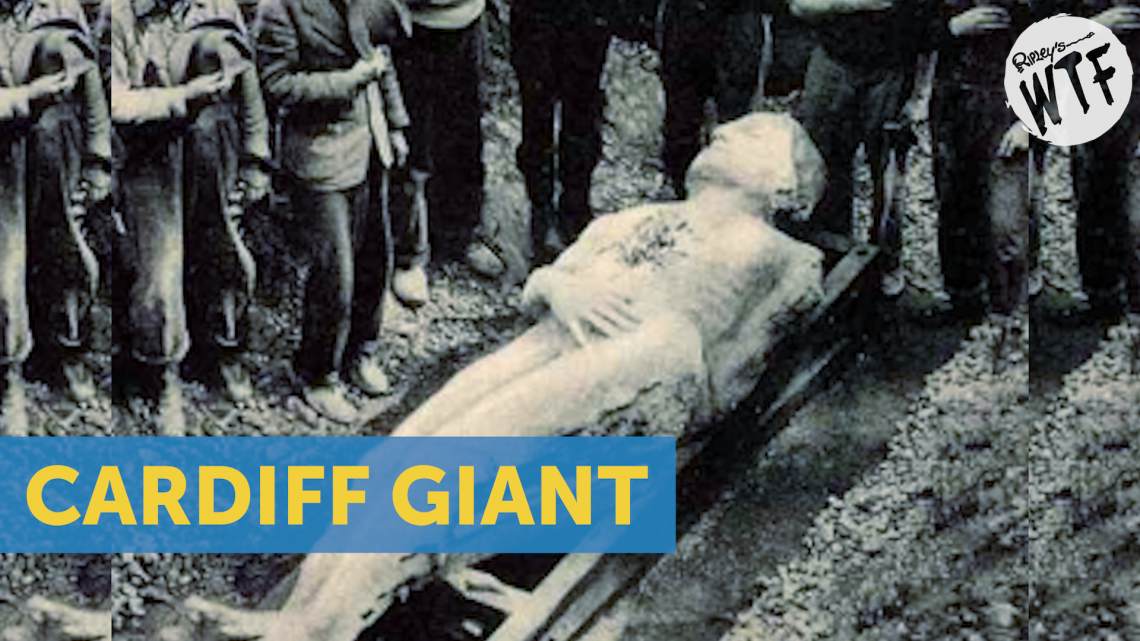 In the Fall of 1869, Gideon Emmons and Henry Nichols made a monumental archaeological discovery. They were digging a well on a farm outside Cardiff, New York, for a man named William Newell. Three feet down, they hit stone, and as they cleared away the dirt, they made out what seemed to be a human foot!

“I declare, some old Indian has been buried here!”

Unearthing the whole body, they discovered a 10-foot tall petrified man, who would come to be known as the Cardiff Giant. The Giant hadn’t been reduced to a skeleton but appeared to have been petrified, and now made entirely of stone. Ribs, an Adam’s apple, skin pores, and even a benevolent smile were all apparent on the stone figure.

Newell immediately opened the giant’s tomb up for viewing, and carriages, buses, horse riders, and buggies came from all over to see what religious scholars were calling a giant that had perished in Noah’s flood. He initially charged 25 cents for entry, but quickly doubled it as the roads leading to his farm became choked with people. 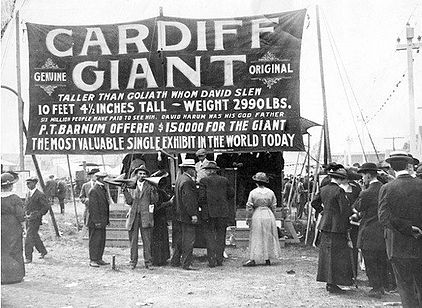 Away from the bustle, inside the viewing tent, onlookers fell silent, and no one dared speak above a whisper in the presence of such a profound specimen. Light fell from the center of the tent on the giant lying in his grave. One arm cradled his stomach, as if in the throes of death pain, but his gentle smile was cemented in a state of eternal serenity. America’s attention was fixed on the Cardiff Giant, and scientists were even coming out with explanations on how the giant had come to be petrified.

At this time in history, emerging science and sideshow hoaxes were raging with popularity. P. T. Barnum himself offered to pay $50,000 for a share of Howell’s giant and to move it to New York City. When Howell refused, Barnum sent agents into view the statue up close, and had an exact replica created. This fake Cardiff Giant proved just as popular as the original, with few people calling it a fake at first. 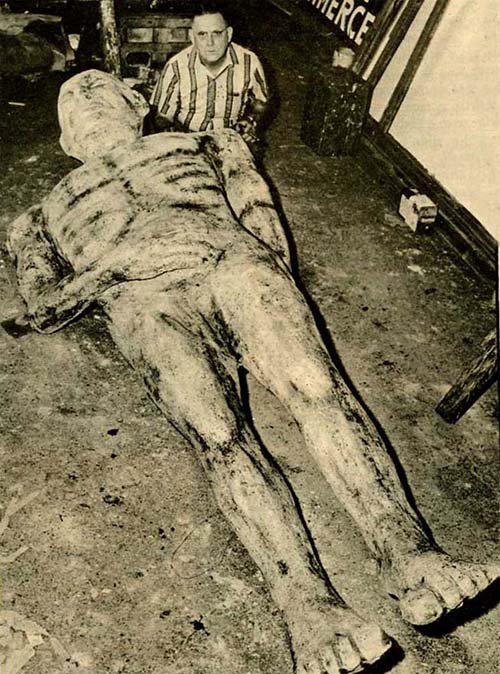 The original statue was, of course, a forgery too, planted there by Newell’s friend George Hull. Both men were in on the hoax, but the idea came to Hull—an atheist—after arguing with a priest for hours about literal interpretations of the bible. Hull lie awake all night that evening, trying to think of the most ridiculous thing people would believe, and eventually came up with the idea of the Cardiff hoax.

“There were giants in the earth in those days; and also after that, when the sons of God came unto the daughters of men, and they bare children to them, the same became mighty men which were of old, men of renown.” Genesis 6:4

Hull spent years and thousands of dollars constructing the Cardiff Giant. All the work had to be done in secret as well. The 5-ton block of stone used to make the statue under the premise it was going to be carved into a statue of Abraham Lincoln.

He took the stone to a pair of sculptors in Chicago, posing as the model for the statue himself. When the carving was complete, they doused the whole thing in acid to give the stone a weathered look.

News about the origins of this pre-flood giant eventually got out, and legitimate scientists decried it as a hoax. As pressures mounted, Howell and Hull sold the statue before admitting everything in a newspaper exposé. Hull had accomplished his goal though, he had made his point about the gullibility of the public, and make a fistful of cash along the way.