Journeys to Every Country in the World: Part 1 – Cassie De Pecol

She ran out of her savings just six months in, but that didn't stop her. 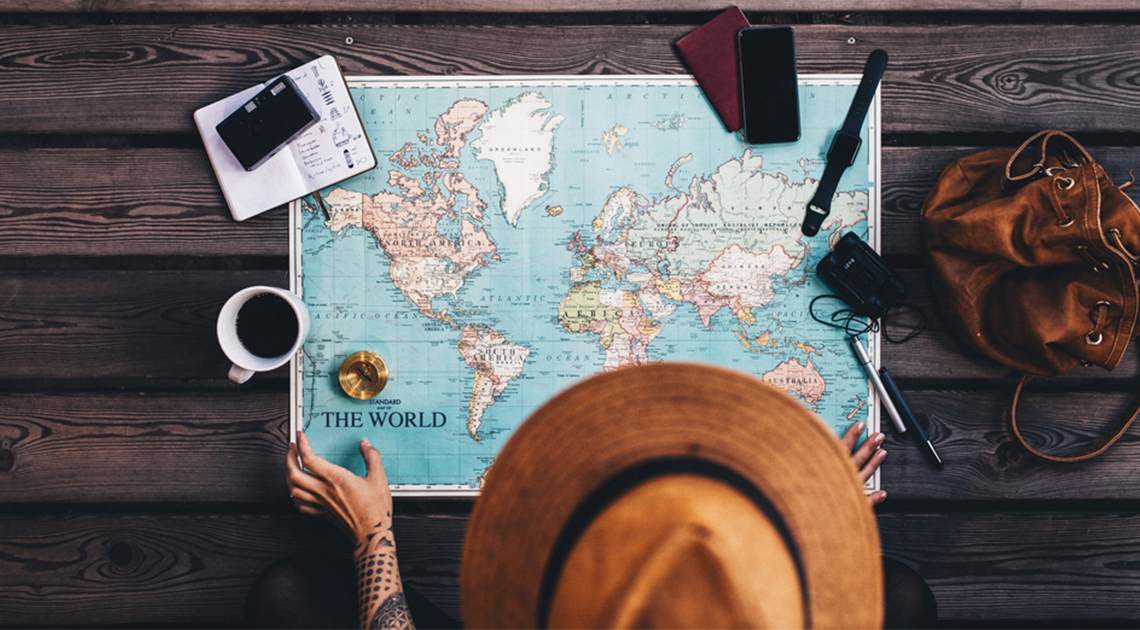 In a blog series, Ripleys.com spoke with travelers who have visited every country. Here’s what one traveler, Cassie De Pecol, experienced.

Upon arriving in war-torn Somalia in 2016, Cassie De Pecol—an American woman on a quest to visit all of the world’s countries—needed to get from the airport to her hotel. While walking would have taken her just four minutes, the hotel managers instructed her against it, telling her it was too dangerous. Instead, they arranged for her to take an armored vehicle.

Along the way, De Pecol, at the time in her mid-20s, could see holes and marks on the sides of the roads from recent explosions.

This was one of many believe-it-or-not moments that De Pecol experienced during what she refers to as Expedition 196—her journey to each and every one of the 193 countries that are member states of the United Nations, plus Taiwan, Kosovo, and Palestine.

Now 29 years old and living in Los Angeles, she dropped out of college in 2011 to travel and encourage sustainability worldwide. De Pecol, who had also once appeared on the Discovery Channel show “Naked and Afraid,” describes herself as somebody who remains committed to anything she puts her mind to. She officially launched her expedition in July 2015. Eighteen months and 10 days later, she broke two world records as the fastest person and fastest female to visit every sovereign nation, staying in each for two to five days on average.

Relying on scheduled public transportation including air travel, buses, ferries, and the like, De Pecol had to adhere to strict rules to earn these titles. She could take taxis but not more than 30 miles within a country, for example. Along the way, she documented her journey on platforms including YouTube and Instagram. Though De Pecol encountered obstacles, those experiences and the people she met taught her valuable lessons about herself and humanity. This is her story.

De Pecol became an ambassador for the International Institute for Peace Through Tourism and attained financial backing from sponsors and investors ranging from CLIF Bar to AIG to Eagle Creek. She also had some money saved up from babysitting and ultimately spent a total of around $110,000 on the expedition.

She ran out of money just six months in. That’s when she realized she would need to work harder to secure sponsorships if she wanted to keep going.

“I was working about 15 hours a day every single day on the expedition, reaching out to sponsors or companies for potential sponsorship, going to networking events, trying to get everything—from cash, goods, and services—to help me finish the expedition,” she says.

Throughout her journey, De Pecol carried a backpack that fit into an overhead bin on a plane. Inside were clothes, toiletries, a laptop, external hard drives, a pillow and a camera with a tripod, memory cards, microphone, and lighting equipment. In most countries, she dressed in all black in part because she knew she wouldn’t be cleaning her clothes often, and dirt wouldn’t be as visible on darker clothing. De Pecol did have to dress certain ways in some places. She wore a hijab, a type of head covering, in Afghanistan, Iran, and Iraq, among a few others.

Ironically, De Pecol had a fear of flying—especially over water—when she started her adventure. She had originally planned to first visit New Zealand and then travel by plane to the surrounding Pacific countries to get that part of the trip over with. But a scheduling mix-up and two-week delay caused her to change her plans, and she started with Palau, a sovereign nation in the middle of the Pacific Ocean. In early 2017, her trip ended in Yemen.

Moments of Fear and Tension

Among her most frightening moments was in Grenada, the first country she was detained in, she says. Carrying a plastic bag with vitamins, De Pecol says she was placed in a small, square room with orange walls and broken black chairs. The guards—two men—closed the door. De Pecol asked that a female be present, and they fulfilled the request. Each vitamin pill was tested for traces of cocaine. De Pecol felt as though her negative thoughts had become reality, but she stayed calm. Two hours later, she was free to go.

Having traveled to a number of different countries before her record-breaking expedition, De Pecol says she felt nearly invincible when she began her trip; after all, nothing bad had ever happened to her before. Getting detained in Grenada changed her perspective. “It was a wake-up call, and then any other time I was detained after that, it was like, OK, it’s OK,” she says, referring to experiences she had in countries such as the United Arab Emirates and Libya.

Compassion Around the World

There were also moments when De Pecol was surprised at the goodness of humanity that she witnessed. One example was in Pakistan, which is “not looked at as a place that you go to feel safe or have a nice vacation,” she says. Yet it turned out to be absolutely beautiful. She was just as taken aback by the kind-hearted nature of the people she met there—a dramatic contrast from how Pakistan, a country with a history involving terrorism, is commonly perceived.

For De Pecol, one small planning miscalculation could have implications on her safety and time to complete the journey. In Cuba, she arrived at around 11 p.m. on a Saturday night and took a taxi to her hotel. Halfway there, she realized she had no cash—and her U.S. credit or debit cards wouldn’t be accepted. She thought the hotel could perhaps charge her a different way. But that wasn’t the case, and she couldn’t stay there for the night.

On the side of the road, De Pecol waited with her taxi driver, who spoke only in Spanish. He had refused to let her go off on her own. She understood some of what the driver said when he mentioned that he had three daughters; he would hate for one of them to be in her situation. He invited her to stay with his family for the night, and then he could drive her to the airport the following morning.

They arrived at a “very impoverished kind of household,” De Pecol says. It was small and made of concrete, with a 1950s type of TV inside. Drapes hanging over open windows moved as the wind blew in. The driver’s wife readied a bed for Cassie, and De Pecol went to sleep. The next morning, De Pecol awoke to see the wife sleeping on a one-inch-thick foam pad on the kitchen floor with a sheet covering her. “I realized at that point she had given me her own bed to sleep in,” De Pecol says.

She adds, “I realized how kind humanity is around the world, and how much they just want to help one another out. It was just a heart-warming experience.”

De Pecol often gets asked questions about North Korea, she says—a country where a three-day visa cost her $1,000. She entered from Shenyang, China, as the only Westerner among a group of Chinese tourists. De Pecol says she felt like she was walking on eggshells the entire time; she stayed in the same hotel as Otto Warmbier, the University of Virginia student who was sentenced to 15 years of hard labor in North Korea in 2016. (Warmbier died soon after his return to the United States in 2017, when he was in a coma).

Seemingly minor situations made her nervous, like one instance where she left her coffee cup in the hotel’s breakfast room instead of bringing it back to the café she got it from, which wasn’t permitted.

While De Pecol remembers the monuments of Pyongyang, what really sticks out in her mind is the contrast between the main square of the city—“you could lick the floors it was so clean,” she says—and the impoverished communities she and the other visitors drove through. She saw adults and children washing themselves in rivers alongside dirt roads and small, run-down houses made of concrete.

De Pecol dealt with criticism on social media, with some saying her decision to travel by flight wasn’t environmentally friendly, which went against her mission. Others described her as privileged, she says. Critics also pointed out that she didn’t spend very much time in every country.

“All of this stuff really piled on me, and it was throughout the trip when I was completely alone, and I needed to manage it on my own, and I had no one to talk to about it,” she says. But she became a better person because of these experiences. She believes travel should be open-minded and educational and tries not to judge others on how they carry out their adventures.

Her trip ended in Yemen, which for her was the most difficult country to get to. Many travelers take a private charter flight there from Socotra Island, De Pecol says. But the break an official world record, De Pecol wasn’t permitted to do so. She ultimately entered by public bus. Traveling for Expedition 196 was complete.

De Pecol wrote a book, which was released this summer, and is working on a documentary. She also started a nonprofit organization that funds female-driven projects that address at least one of the United Nations’ sustainable development goals. De Pecol has also since traveled to Antarctica, and in a few years will add another excursion to the list—to outer space, in a trip sponsored by Virgin Galactic that required an application.

Even as she plans to travel beyond Earth, the lessons she learned from her expedition to every country in the world will stay with her for life. “I remember standing at the back of an airplane and we were going through turbulence, and I just saw everyone’s heads bobbing in the same direction,” De Pecol says. “…And I was like, you know what? It’s like we’re all the same. Everyone around the world just wants a roof over their heads and a hot plate in front of them, and someone around them who really cares about them and loves them.”

She added, “I think if we can start to understand that more, look past the way people are perceived from the outside and kind of look at the manner of all humankind, then we can create a better world and be more open-minded to places and people and cultures around the world.”

By Jordan Friedman, contributor for Ripleys.com

Previous post The Vancouver Police Museum Has Its Own Morgue