The World’s Most Famous Conjoined Twins, Chang and Eng Bunker

Eng was drafted by both the Confederacy and the Union Armies.

Overcoming all medical odds and societal scoffs—leaving their home in the East to be poked by doctors and pointed at by spectators in the West—Chang and Eng Bunker made the best of their unique condition. Inspiring the term “Siamese Twins,” Chang and Eng are the world’s most famous conjoined twins.

Taken from Bangkok to America

Born in 1811 in a fishing village 60 miles from Bangkok, the twins had their roots more in China than in Siam. From birth, their sternums were connected by a small piece of cartilage, but, believe it or not, the rest of their systems operated completely independently from one another. So, even though their livers were fused, one could be wasted while the other was stone cold sober—which is a good thing since Chang’s weakness was boozing. They both had their vices. Eng was known to go on a gambling benders, playing poker all night long.

From a young age, their mother encouraged them to exercise, stretching their connecting tissue so that it gradually measured more than five inches—allowing the boys to have a little more wiggle room. Although very individual (Chang was always a little shorter), the twins had inseparable experiences.

This story would have never been told if it weren’t for Scottish merchant, Robert Hunter, who spotted the boys swimming. He realized their potential as a sideshow attraction in the West and paid their parents to take the 18-year-old brothers away as human oddities. They toured for 10 years, eventually ending their contract with Hunter and managing themselves for a time, before settling down and enjoying life as Southern gentlemen—plantation and all. 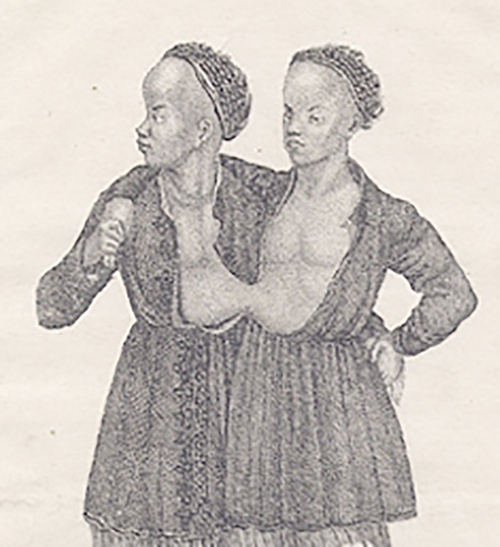 Settling Down and Siring 21 Children

That “and all” leads to romance. Chang and Eng began pursuing a pair of farmer’s daughters next door. It was an unusual courtship. Chang and the so-called “more attractive” sister, Adelaide, fell in love, while Eng and her sister, Sarah, were lukewarm. It took Sarah five years to agree to marry Eng, and both couples tied the knot in 1843.

This wedding stirred up scandal! People considered it “bestial”—a foursome at the very least. I mean, they all slept in an enlarged and strengthened marital bed built for four— Chang and Eng in the middle flanked their wives on either side. Chang and Eng never publicly discussed this private matter, but to put it in perspective, the couples both gave birth to their first children only six days apart. Chang and Eng went on to father 21 children in all. 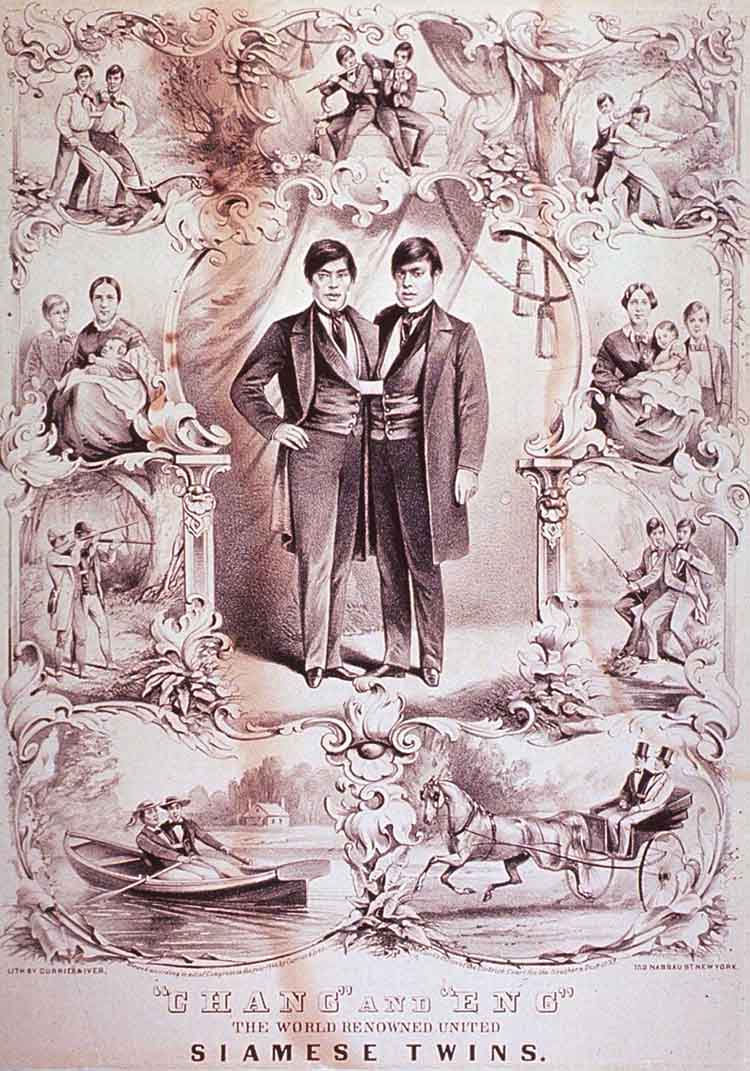 Return to Showbiz and Death of Chang

With the end of the Civil War, came financial ruin for the Bunkers. They went back to the sideshow but had little success this time. Often taking their children on the road with them, the Bunker’s were forced to come face to face with those who viewed their completely natural desire to pursue a normal family life as a devilish abomination.

Chang began drinking heavily, often leaving his sober brother to care for the drunken man attached to him. While Eng was healthy, Chang’s health deteriorated, and during a bout of bronchitis, he passed away in his sleep. Awaking to find his dead brother attached to him, Eng panicked. A doctor was called to remove the dead brother, but Chang announced he was going too and died shortly after.

You can check out Chang and Eng themselves at the Mutter Museum in Philadelphia, Pennsylvania, where the brother’s bodies were cast after examination—an exam that revealed the twins would have had ZERO chance of surviving a separation.

Next post Experience the Waverly Hills Sanatorium for Yourself

Previous post The Reconstruction of Nebiri, an Ancient Egyptian Dignitary