While a taxidermy crocodile seems like an out-of-place decoration in a church, many believe the scaly ornament has a deeper meaning. 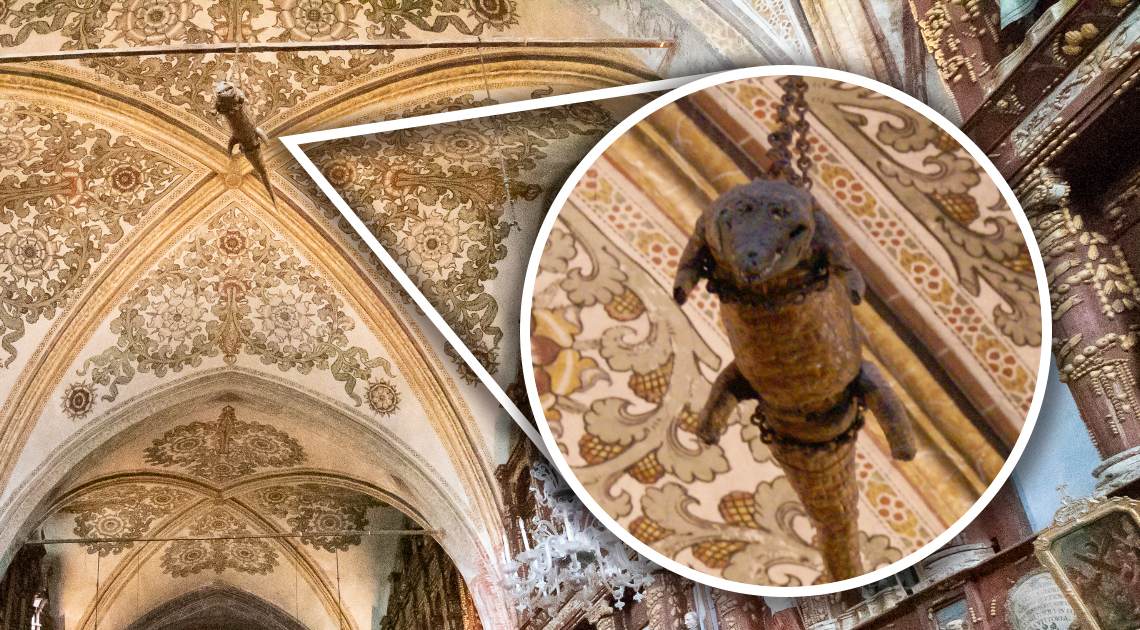 When one thinks of a church, often the cross or beautiful stained-glass windows take center stage. At the Santuario Madonna Delle Lacrime Immacolate (or Sanctuary of Our Lady of Immaculate Tears) in Ponte Nossa, Italy, an ancient crocodile suspended from the ceiling crocs the world of many unsuspecting tourists.

The Body of Crocodile

While exactly how the crocodile arrived at the church is lost to time, the Sanctuary of Our Lady has documents dating back to 1514 discussing the creature’s removal from the holy grounds. At over 500 years old, it is one of the oldest known examples of taxidermy, a process of preserving a deceased animal’s body for display purposes. The crocodile definitely showed up wearing his Sunday best, as its quality hide takes the credit for the taxidermy lasting so long. 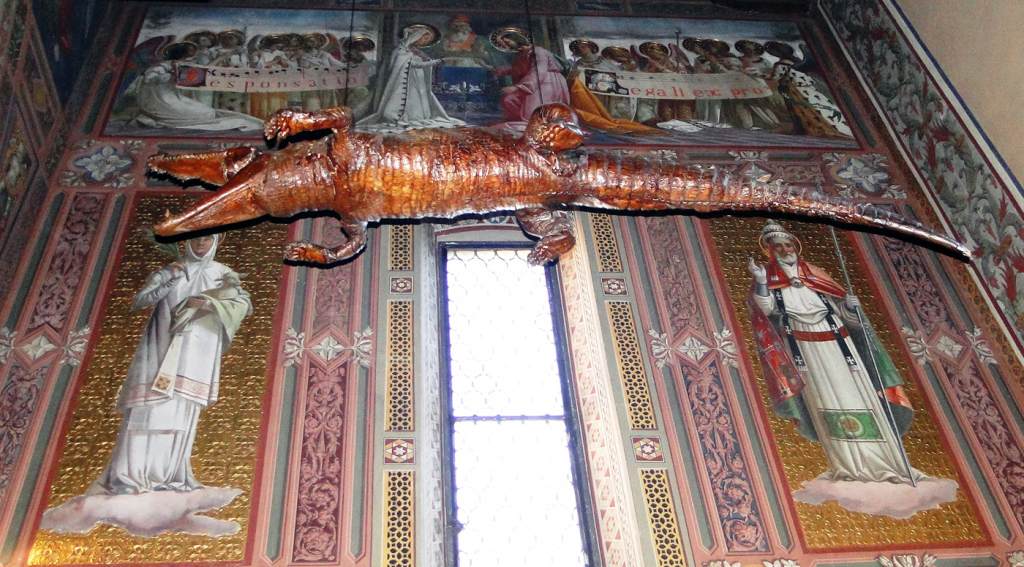 Crocodile hanging inside the Sanctuary of Our Lady of Immaculate Tears in Ponte Nossa, Italy. Credit: Ago76 via Wikimedia Commons (CC BY-SA 3.0).

Two Crocodiles and a Mannequin Walk Into a Bar

Rumor has it that the crocodile arrived at the church during the 15th or 16th century after escaping an exotic private zoo owned by Federico II Gonzaga, Duke of Mantua. Following his escape, a fisherman killed and stuffed the crocodile, who convinced the church to chain it to the ceiling.

Despite the oddity of seeing a chained-up crocodile, it feels at home with the Maria of Grace’s other inhabitants: a series of life-size mannequins. These works of art, made of papier-mâché, wood, and woven cotton, depict tragedies averted by divine intercession. These mannequins include men hung by their hands and condemned to the guillotine. Between the crocodile and mannequins, the Maria of Grace is a beautiful, but unsettling experience. 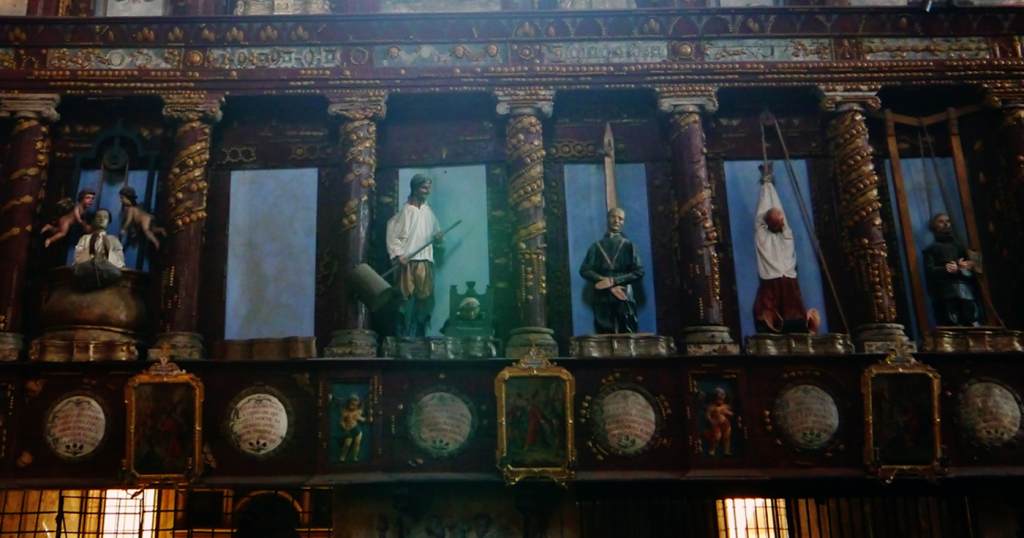 While a crocodile seems like an out-of-place prop in a church, many believe the scaly ornament has a deeper meaning. In the New Testament’s Book of Revelations, crocodiles are associated with the Leviathan, a fire-breathing reptilian creature symbolizing the devil. The hanged crocodile represents a warning to ward off evil and devilish spirits and other trespassing crocodiles.

In the case of an old town hall in Brno, Czechia, its inhabitants spread a legend that a dragon pillaged their town, destroying any people or livestock in its sight. However, the dubbed “Brno Dragon” is actually just a stuffed crocodile that hangs in its mayoral office. To the people of Brno, the crocodile sells the legitimacy of the legend and symbolizes their victory over evil. 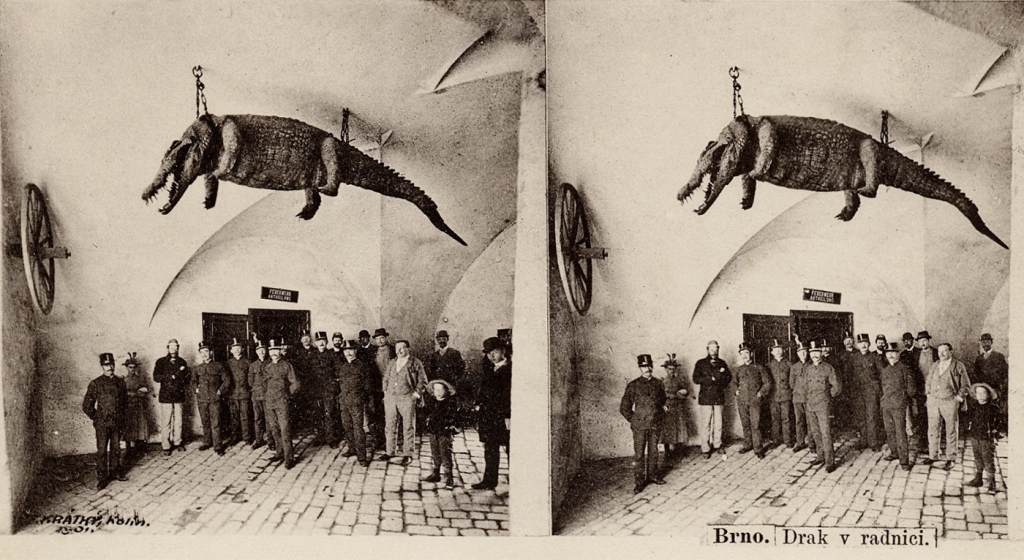 Not only do hanging crocodiles appear in more places than one would think, but the Nubians in southern Egypt use the brute animals in a similar way to this day. By displaying a mummified crocodile in their doorway, it conveys the strength of the household and grants protection against the evil eye.

But whether a spiritual symbol or a unique interior design choice, just pray that these ornaments don’t bite.