The Dionne Quintuplets Spent Their Childhood On Display At Quintland 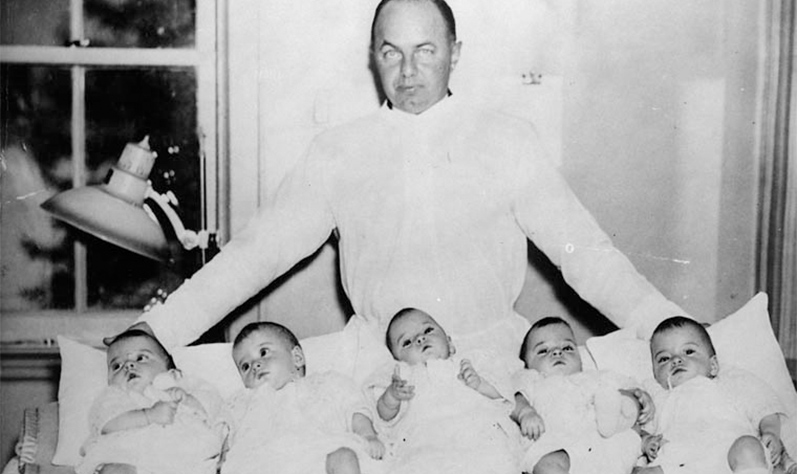 On May 28, 1934, on a small farm in the village of Corbeil in northern Ontario, Canada, Elzire Dionne beat immense odds to give birth to five identical girls. Believe it or not, the Dionne quintuplets are the world’s first recorded quintuplets to survive infancy.

Born at least two months premature, the five babies weighed a meager 13 to 14 pounds combined. With the help of two midwives, Dr. Allan R. Dafoe delivered Annette, Émilie, Yvonne, Cécile, and Marie. At the time, the birth of five babies at once—with all surviving—was simply unheard of, and the successful delivery quickly drew international attention from the media. To this day, they remain the only known set of identical quintuplets to live to adulthood. Another set of surviving quintuplets wouldn’t be born until 1943, though they were not identical.

According to Carlo Tarini, the spokesman for the two surviving sisters—Annette and Cécile—the girls were wrapped in blankets and placed near an open oven for warmth in the family’s tiny backwoods farmhouse. 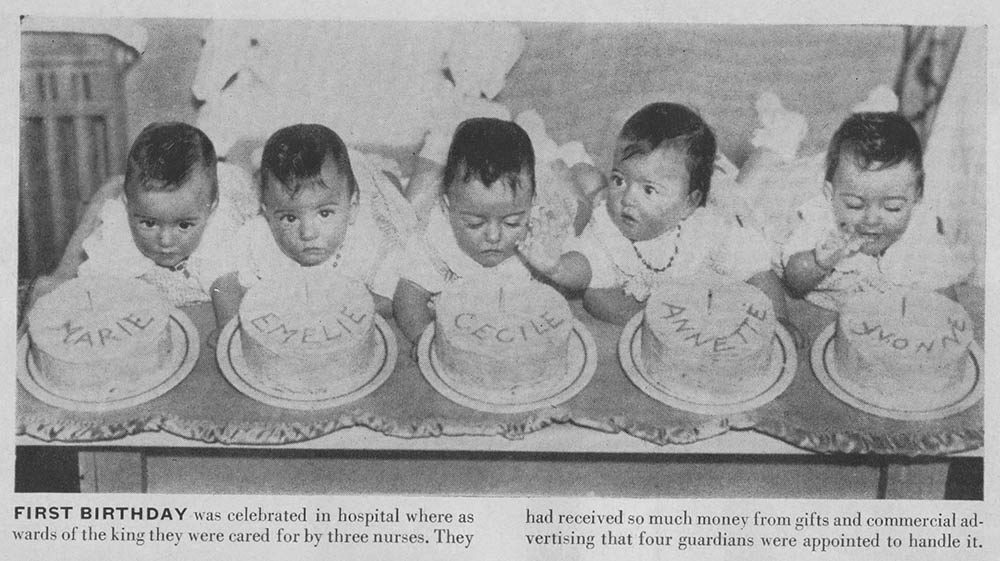 Many viewed their birth as a sign of hope and strength in the face of the Great Depression. “They were born under the most adverse of circumstances, so to have them all survive was truly incredible,” says Nancy L. Segal, director of the Twin Studies Center at California State University, Fullerton.

Soon after the Dionne quintuplets’ birth, their father reached out to a local newspaper. He asked whether it would be more expensive to run a birth announcement for five babies rather than one.

Initially skeptical about the possibility of quintuplets, reporters and photographers traveled to the Dionnes’ remote Canada home. They indeed saw five newborns—so small that they could all fit in the hands of one of the nurses. The Canadian Press distributed the news to outlets across the country. The Associated Press too received word of the miracle, and the birth of the world’s quintuplets gained international attention. Since no set of quintuplets was ever known to have lived for very long, the sisters’ struggle to survive made front-page headlines across the globe.

Within days, the Canadian Red Cross sent nurses and an incubator to the Dionnes’ home. Defying the odds, the sisters grew more and more healthy despite their premature birth. Without a doubt, they became the most famous babies in the world.

Soon after they were born, a promoter for the Chicago World’s Fair approached the quintuplets’ father. The promoter offered Oliva Dionne—who already had five other children—a large financial reward along with medical care for the identical girls if they attended the grandiose event. Unsure of what to do, Oliva contacted a local parish priest, who encouraged him to follow the money—so long as the priest received one-seventh of it himself. The babies were, after all, a miracle from God, the priest said. Oliva agreed to do just that, but when news spread of his decision, he faced a tremendous backlash.

“There was a major wave of Canadians who said, ‘This is not right. They’re taking away our miracle children to the United States. Those greedy promoters are taking away our miracle babies,’” Tarini says. “The following day, the father was sort of shattered by what was being said in the papers. So, he decided to return the check with a letter saying the children would not be appearing.”

His decision came too late. The Ontario government intervened, whisking the babies away from their parents and passing The Dionne Quintuplet Guardianship Act. The girls became wards of the state, housed in a nursery that eventually transformed into Quintland, a tourist attraction for visitors around the world. 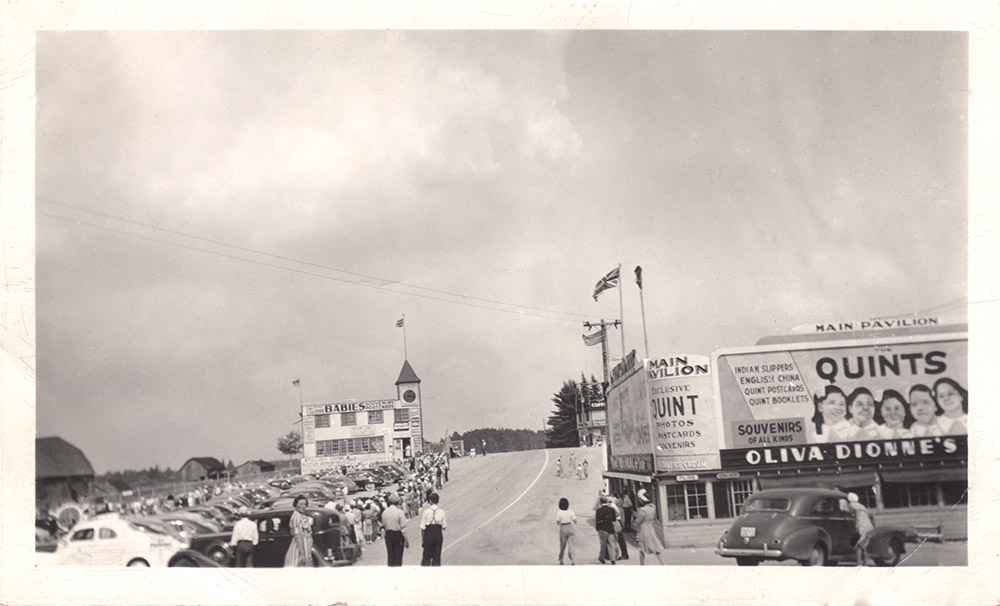 For nine years, the girls were placed on display multiple times a day. Even during the peak of the Great Depression, more than 3 million visitors came simply to watch them from behind a glass mirror. As the girls played together, they could only hear—not see—the viewers, all the while having little contact with their parents, despite them living just across the street.

Heather McAuley, chair of the board of directors for the nonprofit organization Multiple Births Canada, says, “They were kind of made into a zoo…They certainly got sold out. I think the government and the doctor really sold their image and sold the cuteness factor.” 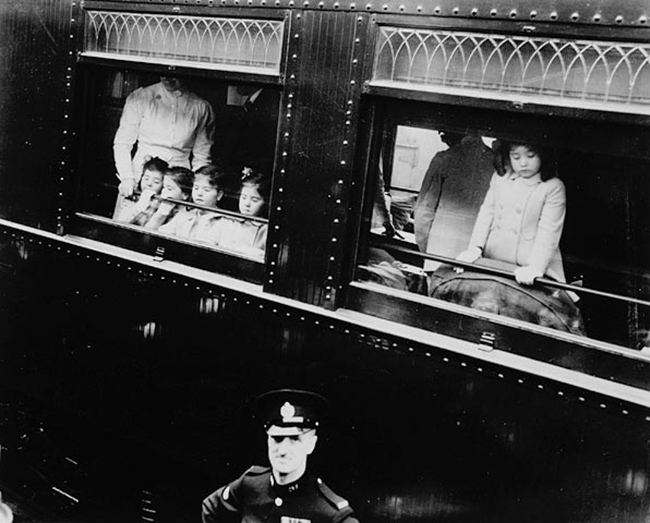 Traveling to see the queen in Toronto.

Quintland generated about $500 million in revenue and brought greater life to the small Canadian village near the city of North Bay, prompting the construction of new hotels, restaurants and souvenir shops. The Dionne sisters became the planet’s most photographed children; they landed on the front pages of TIME and LIFE magazines and appeared on advertisements for major companies—everything from Colgate Dental Cream to cough syrup—along with the fronts of postcards and other mementos. Dolls resembling the Dionne quints outsold those of Shirley Temple and four movies were made about them in the 1930s! 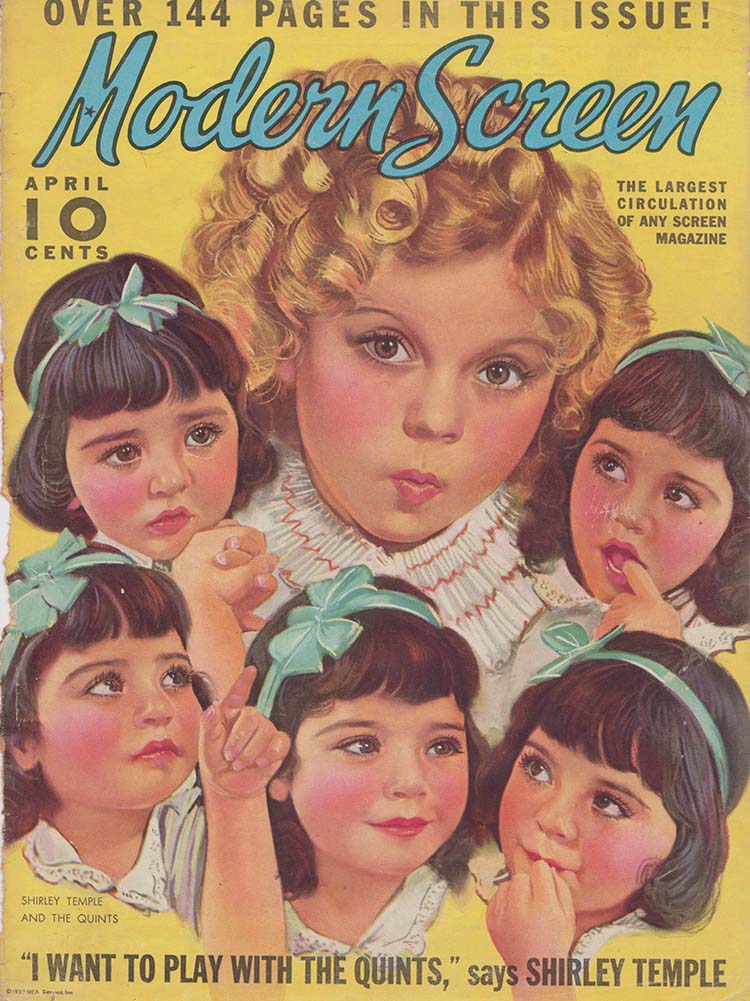 Tragically, the Dionnes didn’t live typical childhoods, Tarini says, and they were subject to scientific experiments. They were “perceived as royalty, princesses, while in fact they were treated like Cinderellas,” Tarini says. While on display to the world, the girls also attended school within Quintland. Yet they “didn’t get to travel very much,” Tarini says, “and they never got to develop as normal human beings, basically.” They later wrote in their memoir, We Were Five, “Money was the monster. So many around us were unable to resist the temptation.”

When the quintuplets turned nine, their parents regained custody of their daughters. Some years later, the sisters claimed they were mistreated by their parents and struggled to develop healthy relationships with their parents’ other children.

In the quintuplets’ memoir, they described the situation as “the saddest home we ever knew.” The Dionne sisters—responsible for completing more chores than their siblings and serving their family meals—largely avoided the public spotlight after Quintland, albeit for a few memoir and book publications about their lives. 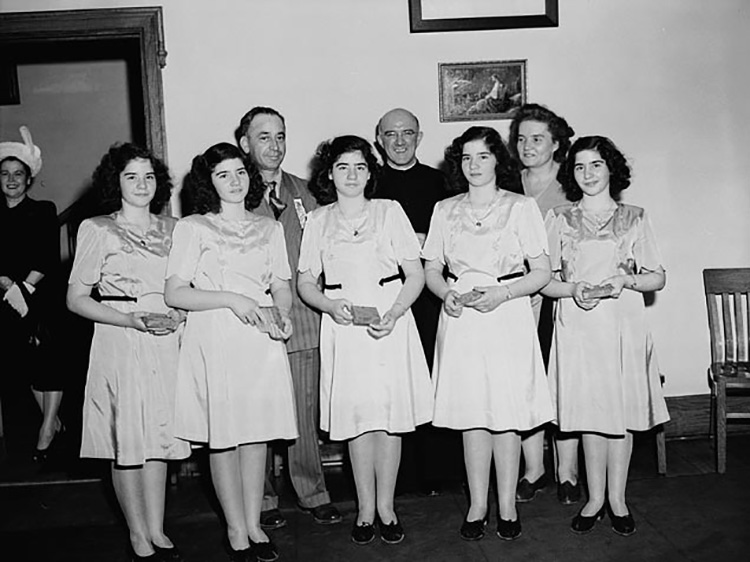 The quintuplets at age 13.

By the time they were 18 and on their own, the sisters could hardly tell the difference between a nickel and a dime given their lack of a proper education, says Tarini. One of the five, Émilie, died young, at age 20, suffocating during an epileptic seizure, according to The New York Times.

During its existence, admission to Quintland was free, but the Ontario government put aside the revenue that the girls generated through advertising campaigns and the sale of souvenirs bearing their images—among other things—in a trust fund. That money, Tarini says, was supposed to be for the girls later in life. Instead, most of it was used to pay for the salaries of the nurses who cared for them at the theme park, the policemen who directed traffic, and other amenities like toilet paper for the millions of tourists who passed through.

In the late 1990s, the sisters again reemerged in the media after launching a campaign for the Ontario government to hold a public inquiry into their mismanaged funds. They ultimately won a settlement of $4 million. In the past few years, the two surviving sisters have reappeared in headlines, granting a rare interview with The New York Times in 2017 in their quest to preserve the family home in which they were born. Backed by local residents, especially senior citizens who remembered the Dionnes as one of the biggest stories of their lifetimes, Annette and Cécile Dionne launched a fight to maintain their birthplace and keep it in North Bay. They succeeded. The home has since been transported to downtown North Bay and will likely reopen as a museum in the summer of 2018.

By Jordan Friedman, contributor for Ripleys.com.

Next post This Jewelry Contains The Hair Of Abraham Lincoln