Let's take a break from that "9 to 5" to learn a little more about Dolly. 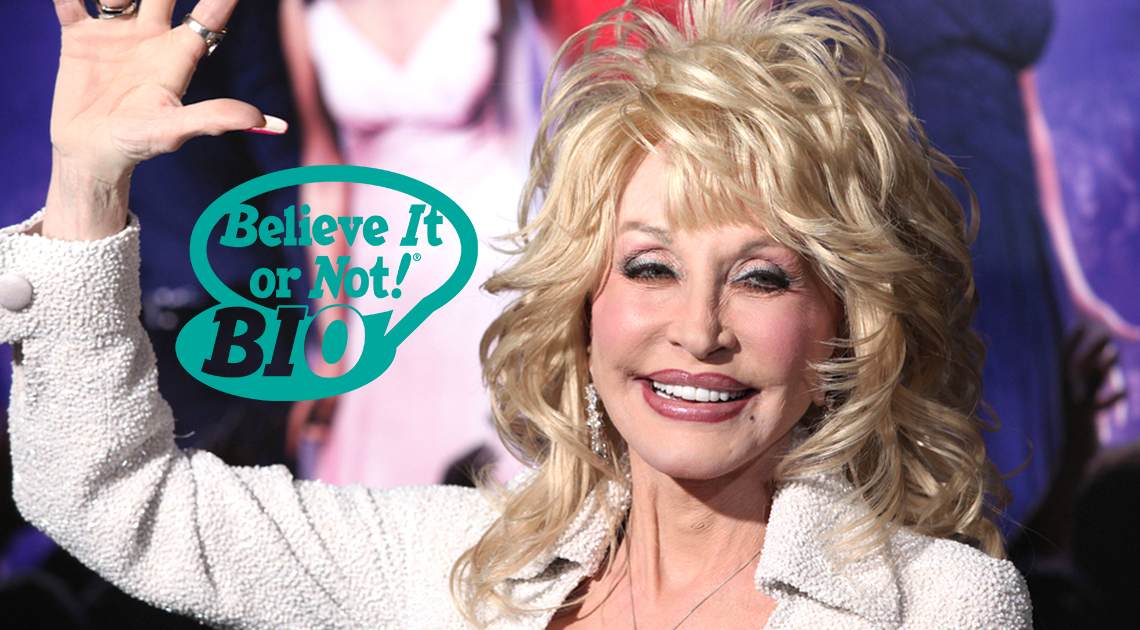 When it comes to crowning the Queen of Country, there’s no competition for America’s own, Dolly Parton. While her chart-topping hits are hard to miss, along with her iconic blonde hairdo, there are plenty of lesser-known facts about this music sensation. Let’s take a break from that “9 to 5” to learn some Believe It or Not! tidbits about Dolly.

Dolly Parton’s parents paid for her birth with a sack of Oatmeal.

On January 19, 1946, in a one-room cabin in Sevierville, Tennessee, Dolly was the fourth of 12 children born to Robert and Avie Lee Parton. Her family was so poor that a sack of grains was all that her family had to give to the doctor that delivered her. Her father worked as a sharecropper before starting his own tobacco farm.

As Dolly became more successful, she never forgot where she came from and was extremely generous to her family, especially the ones who raised her.

Although the 200-word song revolves around being jealous of another woman, the original idea for “Jolene” came from a more innocent event. While on stage one night, Dolly’s eyes were drawn to a little red-head girl, around 8 years old, who was holding a sign for her to autograph. 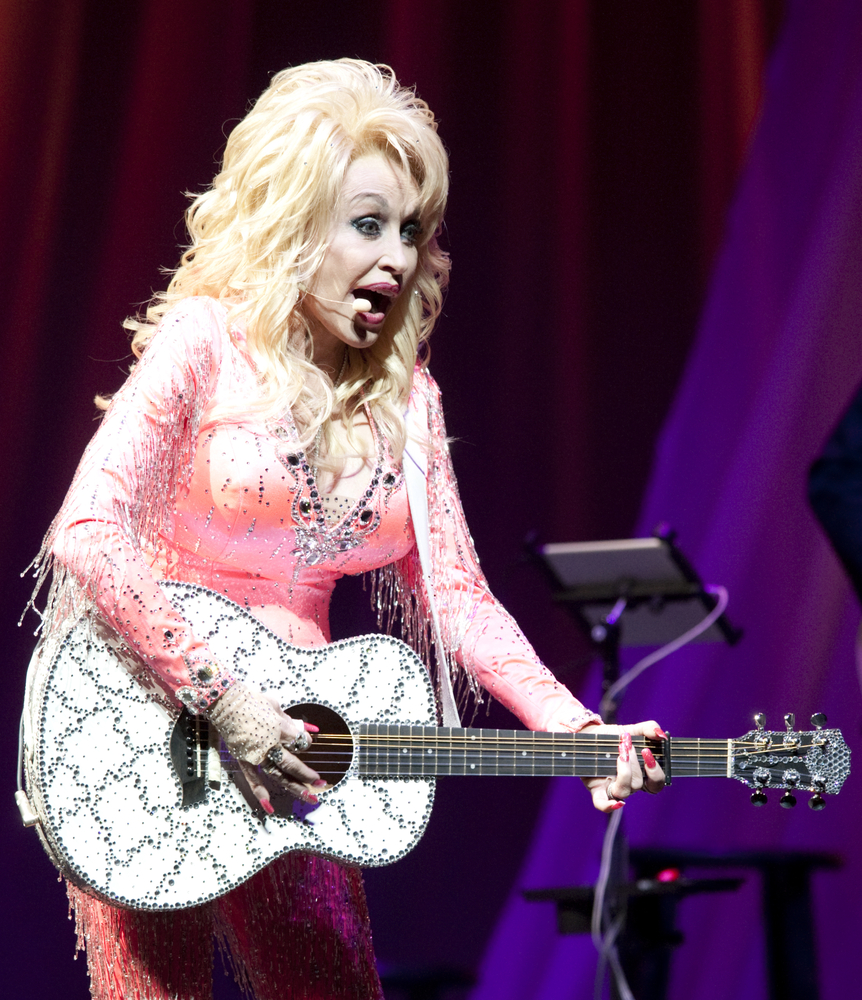 While she used the girl’s name for her new song, the storyline came from her own life. Soon after Dolly married Carl Dean, an attractive red-headed bank teller supposedly was a bit flirty with Dolly’s husband.

This encounter prompted Dolly to write out her feelings, later becoming the hit song. As Dolly said, “Had it not been for that woman, I would have never written “Jolene” and I wouldn’t have made all that money, so thank you, Jolene.”

Without revealing her identity, Dolly decided to enter a celebrity impersonator contest in Los Angeles pretending to be a drag version of herself. She told ABC, “They had a bunch of Chers and Dollys that year, so I just over-exaggerated—made my beauty mark bigger, the eyes bigger, the hair bigger, everything. All these beautiful drag queens had worked for weeks and months getting their clothes. So I just got in the line and walked across, and they just thought I was some little short gay guy…but I got the least applause.”

Dolly has named each and every one of her wigs!

In an interview with James Corden and Jennifer Aniston, Corden pulls out this iconic photo of Dolly asking about her wig—being that it’s his favorite and “an absolute triumph.”

“Oh lordy. That’s Dragzilla.” She admitted to giving her wigs different names so her wig master extraordinaire, Cheryl Riddle—also known as Cheryl Curl—knows what look she’s going for. Her favorites include the “Twist and Spout” and the “Chunky Monkey,” which refers to hair crimping.

When asked how many wigs she owns, Dolly mentioned she wears one every day, so she must have at least 365. Dolly doesn’t shy away from the reality of her love for beauty enhancements, but when it comes to the wigs, her natural hair just doesn’t hold the lift and volume it used to after years of bleaching and teasing.

The University of Tennessee offers a course entitled History 307: Dolly’s America, which explores her impact on culture and history. According to UTK’s website, this course looks at how a “hillbilly” girl from Appalachia grew up to become an international sensation. It is a thesis seminar for history students in the honors program, and it’s meant to give students a new way of understanding Appalachia’s modern history and Dolly’s role in it.

After an article was released in the New York Times about the Dolly class, RadioLab reached out to Professor Lynn Sacco to interview her and the students taking this course. Soon after, RadioLab took on the name and became Dolly Parton’s America.

Following the name change, the podcast was filled with information from students, faculty, and staff, so much so that it became a nine-part series examining the life and cultural influence of Dolly. Podcast host, Jad Abumrad and his co-writer and producer, Shima Oliaee, had more than 12 hours of interviews and followed Parton for two years. Dolly Parton’s America podcast even received a Peabody Award!

From the girl voted in High School ‘least likely to succeed’ this sure is a blessing! https://t.co/3EnB8ixB4f

Measuring in at a reported 40DD, Dolly took out a policy to cover herself in case anything were to happen to her girls. Each is worth $300,000, making just her chest valued at $600,000. 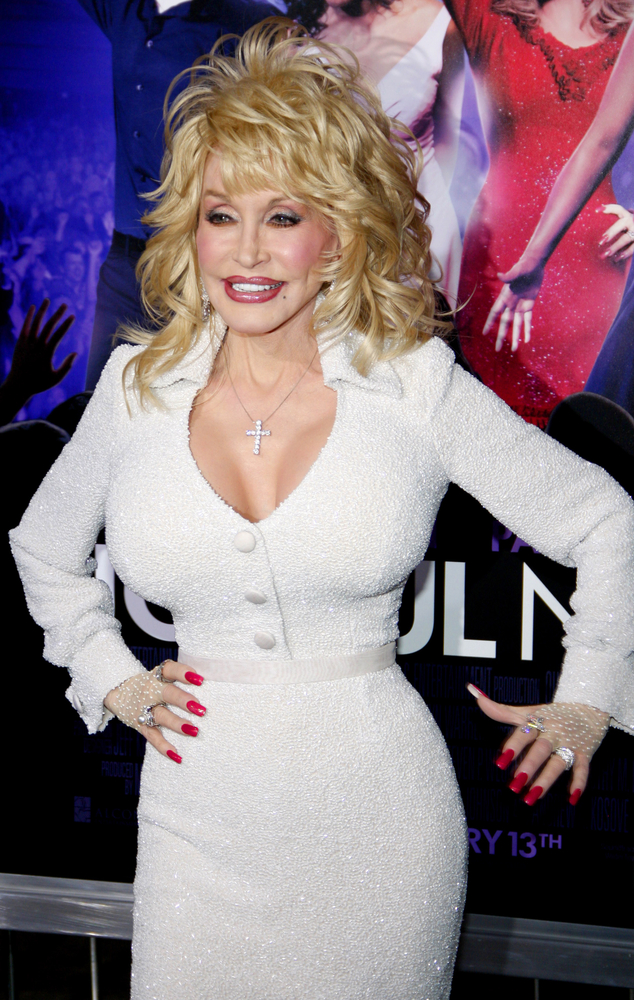 Dolly has made it known that she is not afraid of being branded as someone who is fake, as she’s confident that her fans respect her authentic personality and artistic talents. She told CBS in an interview, “It is true that I look artificial, but I believe that I’m totally real. My look is really based on a country girl’s idea of glam. I wasn’t naturally pretty, so I make the most of anything I’ve got.”

She doesn’t ride the rides at her own theme park, Dollywood.

Aside from her general fear of theme park rides, there’s one other reason why Dolly doesn’t hop onboard her very own Tennessee thrills. Her reasoning stems from the simple fact that doesn’t want to mess up her iconic look—she prefers that her wig, makeup, and shoes stay intact.

She told the New York Times, “I’m going to have some handsome man mess it up, I don’t want some rides doing it.” 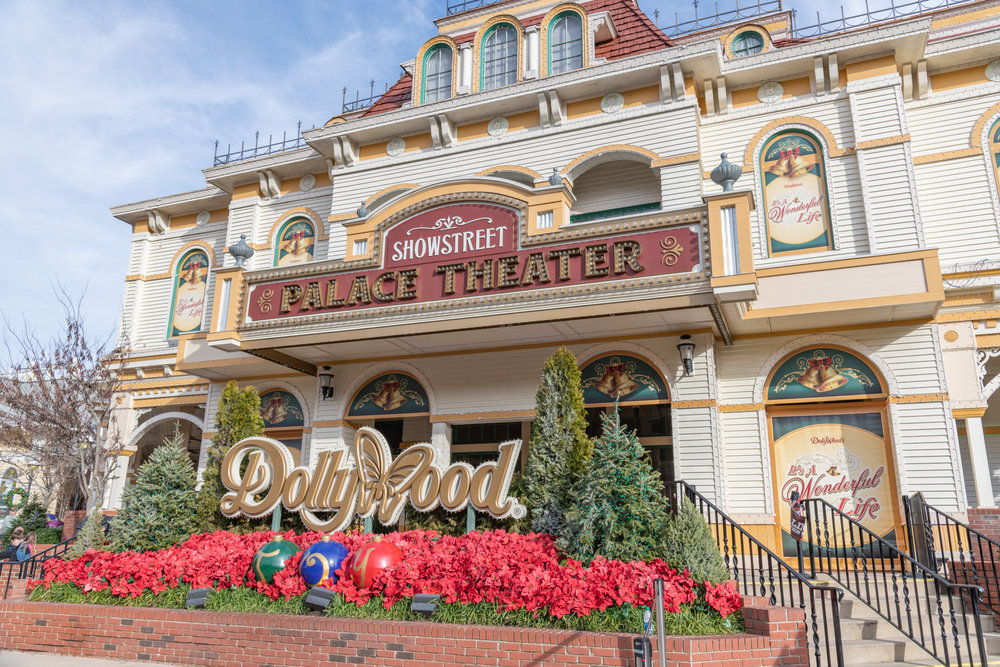 Dolly turned down The King of Rock and Roll.

Not many women in the 70s would turn down Elvis Presley, but Dolly had to make the hard decision to do just that. Shortly after her chart-topper, “I Will Always Love You,” was released, Elvis reached out to Dolly asking to do a cover of her song.

Elvis’s manager continued to push for at least half the publishing rights, but the song was already such a hit for Dolly and her publishing company that she denied Elvis the opportunity.

In 1992, Whitney Houston covered the song and went on to earn Dolly $30 million in royalties. She told Event magazine, “People say it’s Whitney’s song, and that’s all right as long as they send the cheques to me!”

Dolly Parton is worth $600 million.

Aside from earning her high net worth over the past 50 years in the industry, Dolly has had 25 number one hits and sold more than 130 million records internationally.

Dolly has received nominations 49 times for the Grammy Award, twice at the Academy Awards, two at the Emmy Awards, two Tony nominations, and many others throughout the award show community. 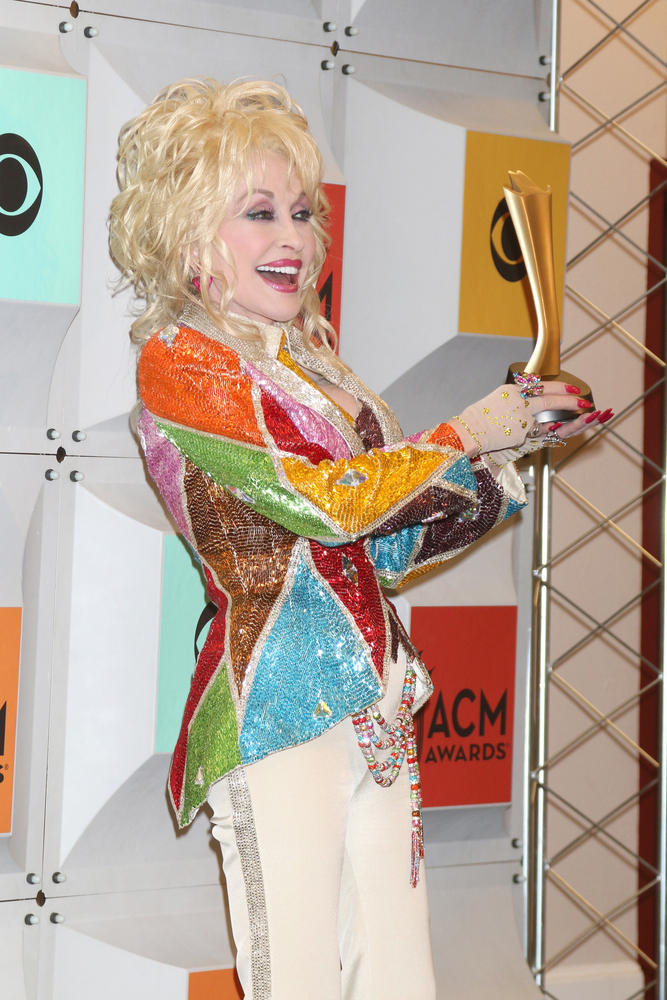 Does Dolly have secret tattoos?

If you’ve taken notice of Dolly’s style and trends, they nearly always include long-sleeved outfits and fingerless gloves. According to her creative director, Steve Summers, she wears them to hide certain features like her hands and elbows. Naturally, many fans started rumors that she was hiding a sleeve of tattoos.

When interviewed by Jad Abumrad, the host of Dolly Parton’s America, Dolly confirmed those rumors. “I have a few tattoos on my body. They are not meant to be tattoos for the sake of tattoos. So I, when I first started gettin’ a few little things done, I had a few little tattoos to cover up the scarring. But I’m not tattooed all over like a bike woman or anything. They’re very delicate.” She describes them as pastel-colored instead of darker inks like an average tattoo. “I have some butterflies, I have some lace and some little bows—a couple of things like that.”

Although Dolly, herself, confirmed the tattoo rumors, many fans still have a hard time believing it, as her tattoos have never been publicly shown. We’ll leave this one up to you to ponder!