The human race has always been fascinated by—and has taken quite a few guesses at—how the world will come to an end. 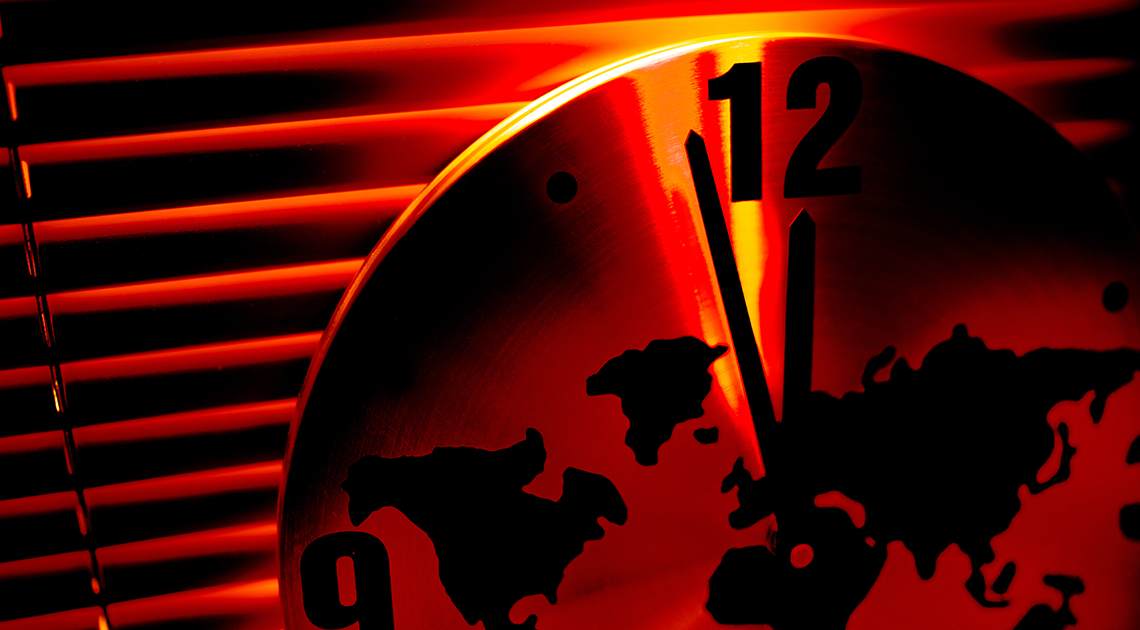 As the great alt-rock band R.E.M. sang, “It’s the end of the world as we know it…and I feel fine.”

Turns out, there have been many times in the past when the people of Earth were convinced that the end of the world was about to occur—and it actually scared the bejeezus out of them.

Even in the years before Christ, there are records of people predicting the end of times. If by weather, sickness, or otherworldly means, the human race has always been fascinated by—and has taken quite a few guesses at—how the world will come to an end.

Thankfully, they’ve all been wrong. Here are ten of the most famous guesses that (again, thankfully) did not come true:

Johannes Stöffler, a German mathematician and astronomer, predicted a world cataclysm on Feb. 20, 1524. How? He said a flood was going to engulf the world—and people freaked. Boat businesses boomed as the most popular pamphlets carried Stöffler’s message. When the day arrived, it began to drizzle, and in Germany, people rioted as they tried to board a three-story ark that had been built on the Rhine. Hundreds were killed. After the disaster, Stöffler reportedly called for a mulligan, saying his calculations were incorrect. The correct end of the world, again due to a massive flood, would be 30 years later. But of course, he was wrong then, too.

A Harper’s Magazine story 100 years after the fact described it best: “Birds went to roost, cocks crowed at mid-day as at midnight, and the animals were plainly terrified.” The people were scared, too. It was 9 a.m., May 19, 1780, and New England was plunged into darkness. A strange mix of fog and forest fires caused dark clouds to blot out the sun—but the people of the day were convinced the end was drawing nigh. Reportedly, people filled the streets with screams and cries. It lasted until midnight, when the clouds parted and the stars were visible again. Nearby practitioners of the ultra-conservative Shaker religion (an offshoot of the Quakers) seized the opportunity and, for the next 26 months, recruited new members who were scared straight by the dark day.

In 1910, when Halley’s Comet was making its most recent appearance, as it does every 75 to 76 years, some people lost their collective minds. A few writers in the United Kingdom claimed it was a sign that Germany was about to invade, and scientists in Chicago announced they’d found a poisonous gas called cyanogen in the comet’s tail. The New York Times even said that a French astronomer named Camille Flammarion predicted the gas “would impregnate that atmosphere and possibly snuff out all life on the planet.” People rushed to buy gas masks and build safe rooms. Others, unconcerned about the predictions, held roof parties. And of course, when the comet passed, no one was harmed. 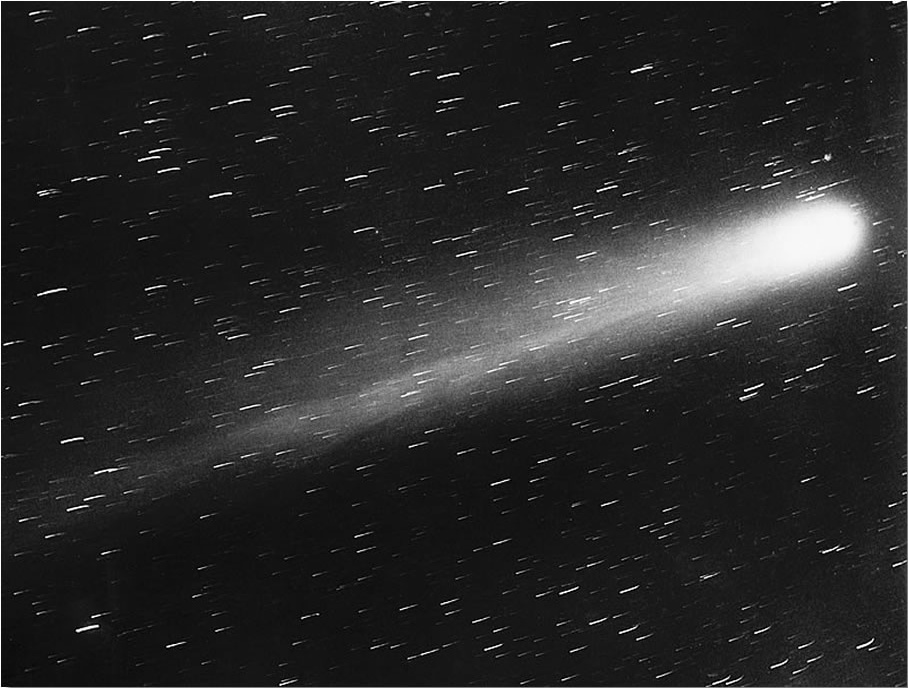 A photograph of Halley’s Comet taken during its 1910 approach.

The year 1914 was a special one for the Jehovah’s Witness religion. The Christian offshoot was founded in the 1870s and had always predicted that 1914 would be the fateful year that Christ and his Kingdom would return to Earth. Of course, that also meant the world would come to an end. Door-to-door went the Witness faithful, warning that a “bloody end” was imminent. And, as all of these stories do, 1914 came and went with no apocalypse. However, Archduke Ferdinand was assassinated, which led to the start of World War I…so there’s that.

Heaven’s Gate was a cult founded by Marshall Applewhite, and they had some seriously out-there beliefs. At the center of their religion was the belief that aliens would come to our planet, riding in a UFO in the tail of the Hale-Bopp comet, which was set to pass Earth in 1997. They felt these aliens would “wipe” our planet clean and transport their souls to the next life. Tragically, they made their own prediction come true: 39 of the cult members took part in one of the worst mass suicides in U.S. history, as the comet passed by without further incident.

“I guarantee by the end of 1982 there is going to be a judgment on this world.” That’s what TV evangelist and former Republican presidential candidate Pat Robertson said in 1980 on his show “The 700 Club.” Um, it didn’t happen. Again, in 2006 he predicted a similar calamity, saying God told him the world would be devastated by giant tsunamis. Nope. And again in 2008, he said that by 2010, society would experience a stock market crash and worldwide violence. Well, if he keeps going, he’s bound to nail it some time, right? 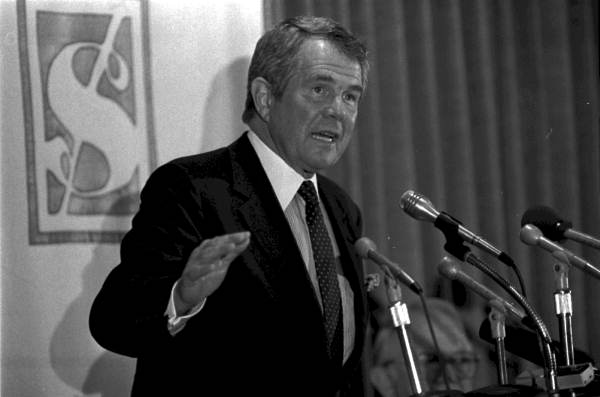 As far back as 1984, tech geeks predicted that because of a computer coding error, on Jan. 1, 2000, all technology worldwide would come to a halt, sending us all back to a version of the Stone Age. See, in those days, computers were tracking dates in two digits–1998 was “98,” 1984 was “84,” etc. When 2000 rolled around, they were all going to think it was 1900, not 2000, and apparently this would cause mass chaos. (The movie Office Space explains it very well.) As the year 2000 loomed, people flipped out more and more. Religious followers supposed this could be the Rapture or some version of the Apocalypse. People stocked up on food, water, and gasoline. Then, the ball dropped on Times Square like normal, nothing happened and everyone went about their everyday lives.

If you’ve ever watched an episode of The Big Bang Theory, you may have heard of CERN in Geneva, Switzerland (one character on the show went to study there for a while). There in Geneva, the European Organization for Nuclear Research, or CERN, created the Large Hadron Collider, a particle accelerator that would allow scientists to study the smallest-known particles. However, the process of colliding these particles, also known as “hadrons,” frightened people around the world. Some thought this process could create a black hole that would open over Switzerland and swallow up the entire world. In 2008, one group of independent scientists even tried to sue to stop this experiment from happening. It didn’t work, and in 2009, the colliding went forward. They’ve been doing it ever since, and no black holes have formed—yet.

Harold Camping, a radio preacher, had it all figured out. Using numerology and readings of the Bible, he’d interpreted that the Rapture would occur on May 21, 2011. Then 89 years old, Camping was so confident he announced the prediction across his airwaves and instructed his disciples to spread the word worldwide. Once again, God did not spirit those worthy followers to Heaven, assuming most people just decided to make plans to go to the lake to celebrate Memorial Day 2011. Then, Camping announced the Rapture would instead be Oct. 21. That was strike two. And people just went on making plans for Halloween.

Based on the supposed end (or “resetting”) of the Mayan Calendar, many thought the world would also end in 2012—specifically on Dec. 21, 2012. In 2009, a movie depicted the idea. And as early as one year before that, news services started running stories about the supposed end of the world. Where did the idea even come from? In the 1960s, a stone tablet was found that said a Mayan God would return at the end of the final, or 13th period (called a Baktun) of their calendar. Other archaeologists cited a second reference to the Dec. 21, 2012 date, found on a brick in other ruins. That’s all it took. Bloggers, religious zealots, conspiracy theorists, and amateur sleuths spread the word: The world was ending in 2012. Instead, Mexico’s tourism industry spiked, as did interest in Mayan culture. And that 2012 movie? John Cuzack aside, it’s pretty ridiculous.

By Ryan Clark, contributor for Ripleys.com and Host of Ripley’s Believe It or Notcast