Life Among The Little People Of Dwarf Empire 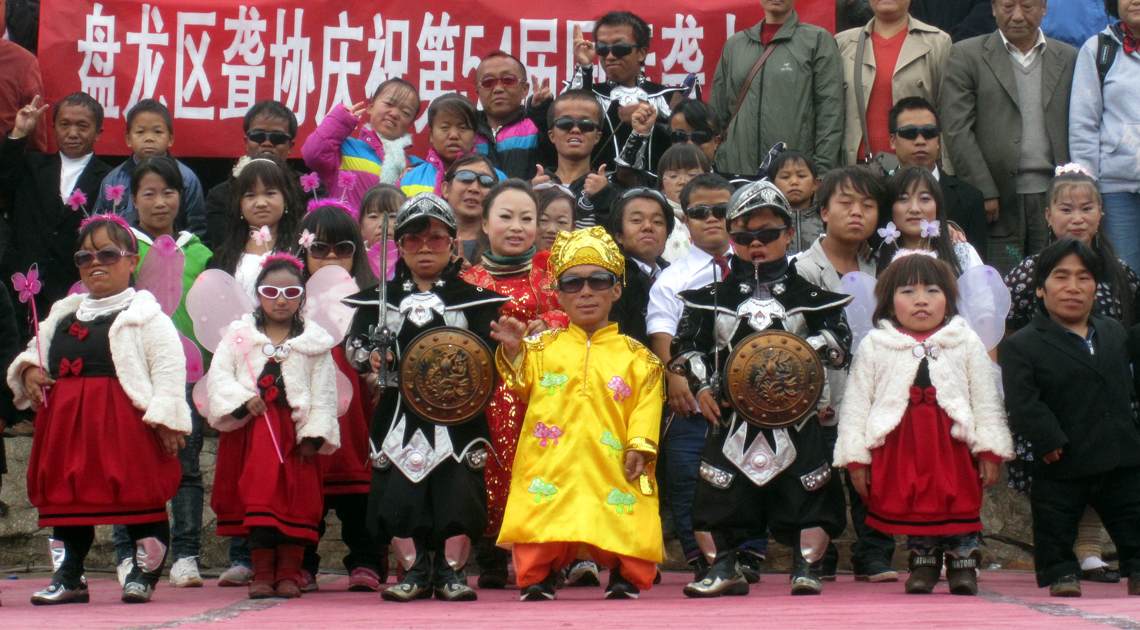 Sitting just outside Kunming, the capital of Yunnan Province in southwestern China, the Kingdom of the Little People (a.k.a. Dwarf Empire) remains a controversial theme park staffed entirely by performers no more than 4 feet 3 inches tall. Since opening in 2009, the park’s staff has expanded from 60 to 140 performers, many with congenital conditions such as dwarfism.

Each day, these performers dress up in costumes and act out everything from fairy tales to Hip Hop dance routines. Dwarf Empire provides a steady paycheck, and it allows staff to showcase their singing, kung fu, and break-dancing talents. But, is it an exploitative human zoo or a humanitarian panacea?

Walking into Dwarf Empire feels like entering a fairytale world of mushroom-shaped houses with whimsical, crooked chimneys. Performers wear fairy tale costumes of every stripe, some brandishing swords and shields. Others wearing brightly colored tutus, butterfly wings, or capes and crowns. Performers range in age from 18 to 40 years old.

Twice each day, they sing, dance, sell refreshments, and pose for photographs. After crowds leave for the day, they stack up chairs, sweep, and head back to their dormitories via golf cart. Dorms accommodate four people and are custom-tailored and furnished for the shorter stature of residents. Like the dormitories of nearby factory workers, they prove humbly decorated and crowded, but represent a happy alternative to life on the streets.

Criticism of the Kingdom of the Little People has come hot and heavy from organizations around the globe as well as movie stars such as Warwick Davis.

How It All Started

The brainchild of electronics and real-estate mogul Chen Mingjing, the $14 million park recruits performers from all over China. The idea for the park came to Minjing after speaking with two individuals with dwarfism at a train station. He learned firsthand of their sufferings as small-statured individuals in China. Saddened by their stories of family rejection, intense poverty, and life on the streets, he decided to create a special place just for them. Hence, the idea behind the Kingdom of the Little People.

While some groups, such as the California-based Little People of America, accuse Dwarf Empire of being zoo-like, many of the performers claim they enjoy their new living arrangements and careers. In fact, most find themselves pleasantly shielded from the stigma associated with dwarfism in mainstream Chinese society. Ironically, however, they trade these challenges for life on display before gawking masses fascinated by an all-dwarf world.

The Kingdom of the Little People

Unfortunately, age-old Chinese beliefs leave vulnerable populations behind. A widespread conviction persists that disability represents a punishment in this life for sins committed in the previous ones. As a result, those with perceived disabilities endure brutal treatment at the hands of their families and the general public.

Eighty-three million individuals with disabilities live in China, yet 40 percent prove illiterate. All—educated or not—face extreme prejudice and abuse. They get denied employment, health care, steady work, and societal roles. While Dwarf Empire looks incredibly exploitative on the outside, it represents one of the few places where little people can go to start over.

Of course, with an estimated eight million short-statured individuals living in China, the Kingdom of the Little People only addresses a minuscule percentage of the population. Yet, many residents feel grateful for a steady paycheck and the company of like-statured peers. The park represents an oasis of sorts, far removed from stigma, public abuse, and cruel neglect. In the outside world, most dwarves endure crippling poverty, often begging on the streets or playing instruments for money.

At Dwarf Empire, salaries start at 800 yuan a month, a cut above the standard wage for the region. The average pay packet comes in at 1,500 yuan, the equivalent pay earned by college graduates. Some employees make even more including the King Dwarf who earns the park’s biggest pay packet at 3,000 yuan.

Besides their salaries, workers can also participate in extracurricular activities and counseling. No wonder Dwarf Empire has attracted employees from all over China. What’s more, Mingjing has ambitious plans to expand the park to house even more little people from all over the world. In fact, he’d like to increase resident numbers to 1,000.