He gained a reputation for shooting the first motion picture… and his wife’s lover. 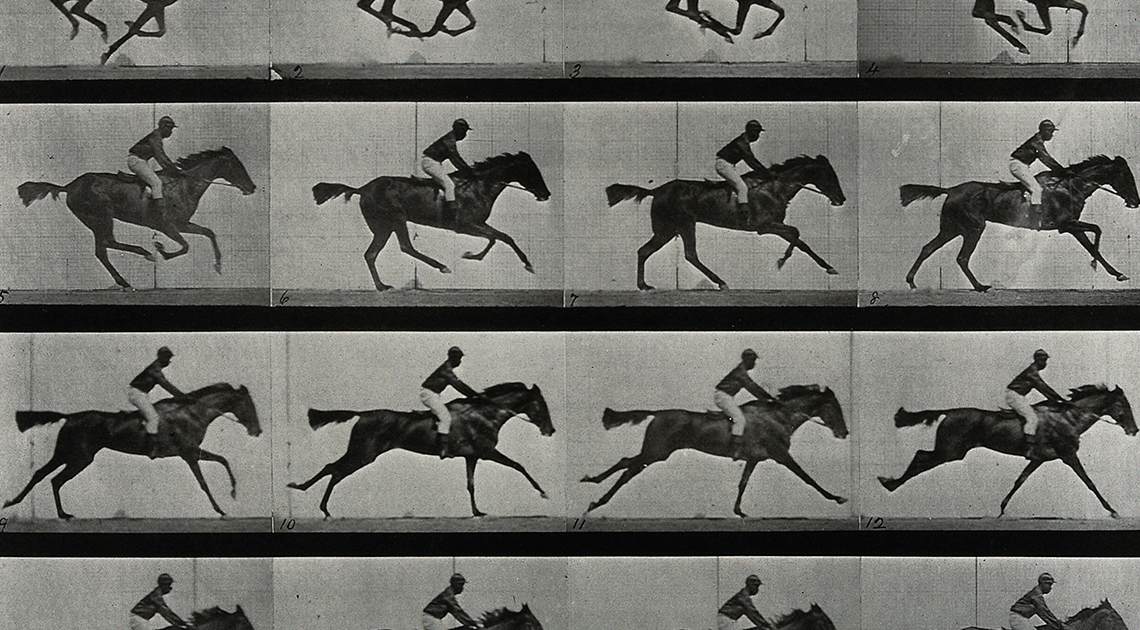 The horror/sci-fi/Western mishmash film Nope is a meditation on the first motion picture, The Horse in Motion. The footage features a Black jockey and is a recurrent theme throughout the flick, per the Insider. Without spoiling Director Jordan Peele’s latest endeavor, suffice to say the protagonists of Nope are descendants of said jockey who must capture something as ground-breaking on film as the celebrated second-by-second record of the galloping equine.

The real-life creator of The Horse in Motion was Eadweard Muybridge, a 19th-century British photographer whose own tumultuous life warrants a genre-bending movie. He survived a traumatic brain injury, his wife’s clandestine affair, and murder charges to singlehandedly create the world’s most pioneering cinematic development.

Here’s what you need to know about the eccentric bookseller turned photographer, the murder trial that rocked the West Coast, and how The Horse in Motion came to life.

Stanford’s Attempt to Get a Leg Up

In June 1878, a group of reporters sat in amazement, having just witnessed the first moving picture. Astonished, they didn’t know what to make of it, and some even declared it a hoax. Nevertheless, it captured the information Leland Stanford, the namesake for Stanford University, wanted. You see, the racehorse enthusiast had long wondered exactly how an equine’s hooves move across the ground during a race. It’s a motion that happens so quickly, the human eye can’t discern it.

Yet, understanding how horses moved over the ground was vital to sizing up the best racehorses, and Stanford knew this. Although what he wanted to know was theoretically impossible, he approached noted photographer Muybridge anyway. Indeed, the famed photographer proved all four horse’s hooves come off the ground as they sprint, placing them in momentary flight.

But mentally processing the evidence would take time for the 19th-century journalists in the room. To them, the two-second clip looked like veritable sorcery — as if Muybridge had stumbled across the secret to making time stand still. In a sense, he had.

Some sources say Stanford and Muybridge placed a bet for $25,000 before settling the matter. They also claim Muybridge’s use of the camera ensured his victory. While a colorful story, most scholars doubt its veracity. But what can’t be denied are the lengths Muybridge went to in his mission to solve the horse hoof question.

He invented a pioneering photographic technology that, unbeknownst to him, would change the world forever. His innovation is especially impressive when you consider Muybridge never set out to be a photographer, let alone a progenitor of Hollywood. Instead, he worked as a bookseller in San Francisco during the epic California Gold Rush years when just about anything seemed possible. But a random event in a Texas cow town forever altered the trajectory of his career.

A Stampede Gets ’Weard in Texas

In the 1860s, Muybridge booked a stagecoach to the East Coast, part of his journey back to London to visit family. But the trip went haywire in Texas after the stagecoach’s horses bolted. He woke up 24 hours later in Arkansas to unwelcome news.

When the horses spooked, Muybridge got thrown, smashing his head and sending him into a brief coma. His attending physician predicted he’d never be same. Muybridge continued to London, remaining there for half a decade. During this time, his British family confirmed changes to his personality had, indeed, occurred. 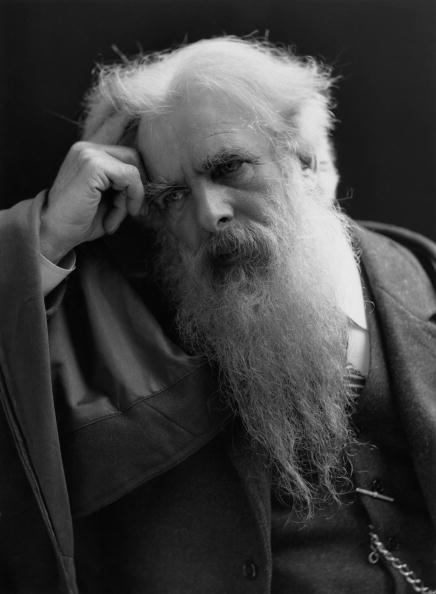 By the 1870s, Muybridge returned to California, working for Stanford to capture images of horses mid-gallop. He’d come to Stanford’s attention while employed by the American government to snap photos of indigenous people. In exhibits of his work, Muybridge went by the title Helios, a reference to the Greek sun god. But nothing prepared the photographer for the task of capturing a horse’s movements. Undaunted, he delved into inventing technology capable of making time stop.

He crafted mechanical shutters using rubber springs, wood, and a trigger. These makeshift shutters allowed him to reduce exposure times to just one-thousandth of a second. It was a tremendous leap in the right direction and one that allowed Muybridge to get to the bottom of the horse hoof controversy.

The first pictures he snapped looked like blurry disasters, but this didn’t deter Muybridge. His untiring focus on split-second development proved so obsessive that some linked these efforts to the after-effects of his brain injury. Scholars today find merit in this hypothesis of injury-induced brilliance.

A Workaholic and His Youthful Bride

Researchers believe Muybridge injured his orbitofrontal cortex, the portion of the brain related to decision-making and feelings, during the Texas stampede. This diagnosis is consistent with reports of Muybridge’s capricious and highly emotional behavior post-accident. This theory might also explain how he got tangled up in the use of lethal force.

In his pre–motion-picture days, Muybridge fell head over heels for a 21-year-old named Flora, leading to a trip down the altar. An impressive 20-year age difference separated the two, but it wasn’t the generation gap that caused friction in their marriage.

Instead, it was Muybridge’s nonstop schedule as a photographer. He left his youthful bride for weeks at a time to photograph Yosemite. She soon found other ways to stay occupied. 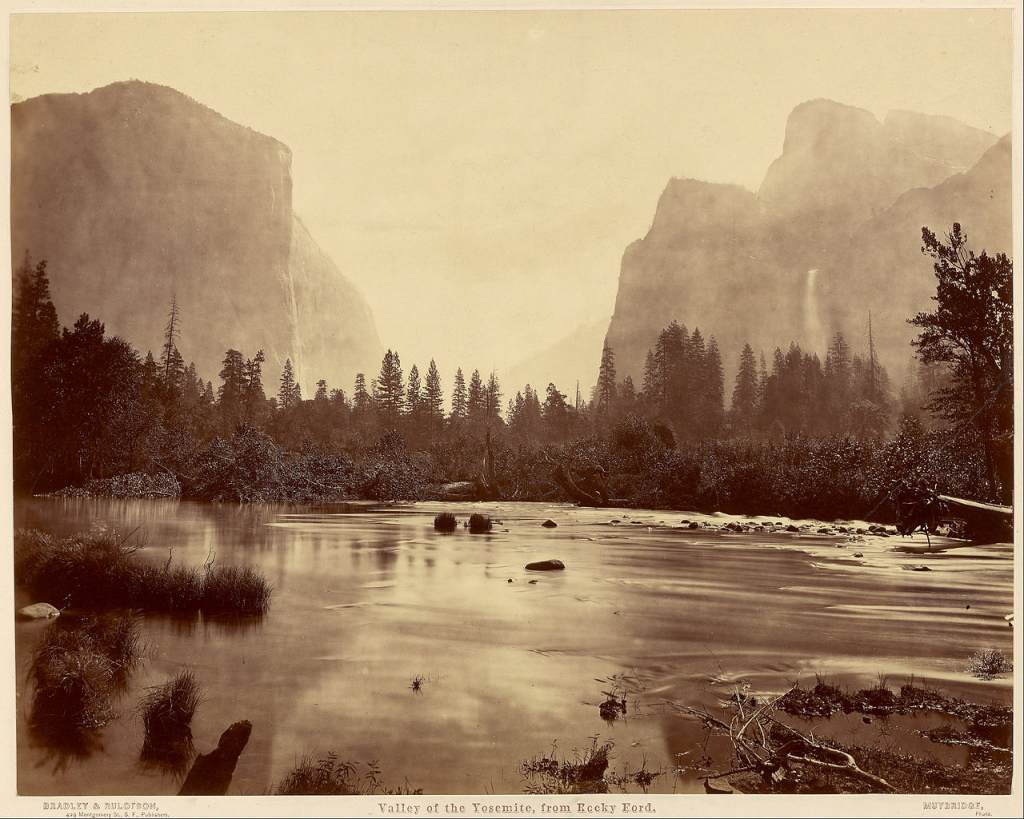 Valley of the Yosemite, from Rocky Ford by Eadweard Muybridge

A Different Kind of Shooting

The photographer learned of his twenty-something bride’s infidelities from a photo of their son, Florado Helios Muybridge. Scrolled hastily on the back were the words “Little Harry,” which Muybridge quickly connected to a local drama critic and notorious man-about-town, Harry Larkyns. Without missing a stride, Muybridge tracked Larkyns down, unceremoniously shooting him in the chest during a card game. It was the Wild West epitomized.

Muybridge stood trial for the murder of Larkyns with uncharacteristic tranquility. His defense attorney proved unequaled in convincing the jury simultaneously that his client was both justified in killing Larkyns and not guilty by way of insanity (enter: head injury). Despite contradictions in these two defenses, the jury acquitted him.

But it was shooting of another kind that put Muybridge in the history books. Just a handful of years later, the photographer made history with his split-second stills of a Black jockey on a horse named Sallie Gardner. Put together in fast succession, these images transformed into the first motion picture, paving the way for countless aspects of our culture today, from Hollywood masterpieces to home videos and the oddly juxtaposed, though entertaining, Nope.

Next post Man Of The Hole: Last Member Of Uncontacted Tribe Dies