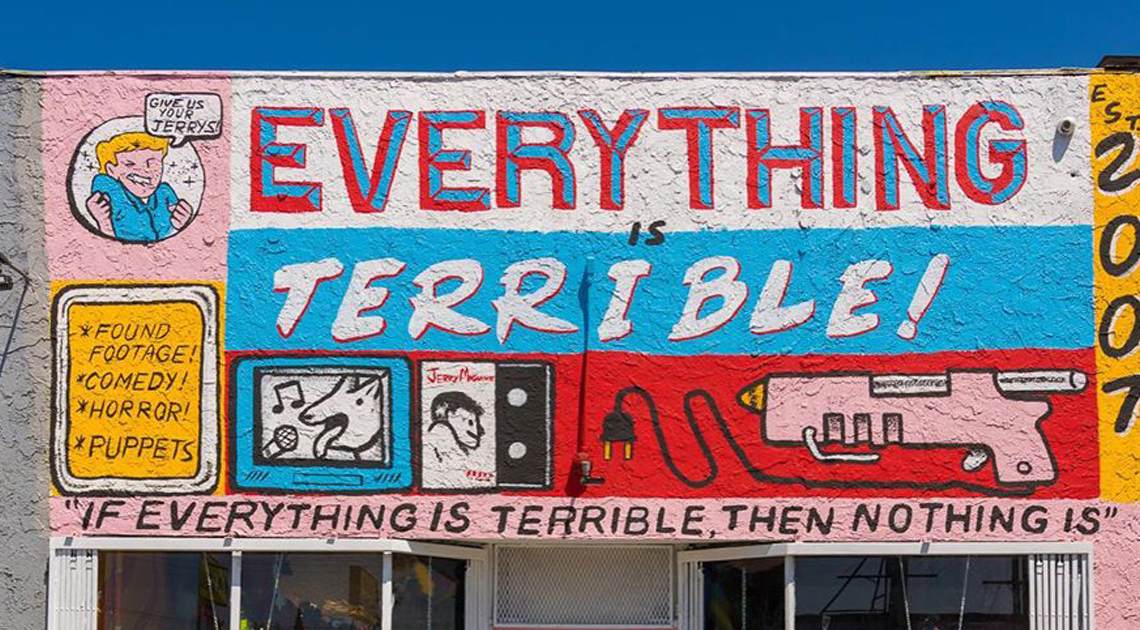 Before the invention of the World Wide Web, getting in your funny-fix was a bit more tactile than scrolling through social media for the latest meme. VHS tapes recorded instructional videos, public safety messages, and off-the-wall dance performances from around the world. These videos were shared through friends, family, and television or movie screens. But where did all of those chunky plastic home tapes end up?

Step inside Los Angeles’s own Everything Is Terrible!, and rewind history to check out the weirdest of the world’s archives.

Everything Is Terrible!, is a comedy troupe and video performance collective. It’s established as a must-see storefront in Los Angeles, California, and is chock full of “junk” that, it insists, will improve the quality of your life.

The shop got its start in Chicago, Illinois, where the creators launched a video-blogging website in 2007. The group describes itself as “gods of psychedelic found footage,” and is known for a massive collection of Jerry Maguire VHS videotapes.

Avid thrift store and garage sale shoppers, the group noticed that there was an inordinate number of Jerry Maguire tapes on the market. So, naturally, they decided to compile the largest collection in the world. The ultimate objective is to build a pyramid of the Tom Cruise classic in the Mojave Desert. And as of summer 2019, the group was over 26,000 tapes toward its goal.

But, EIT’s VHS and video collection isn’t limited to the 1996 comedy/drama in which Cuba Gooding, Jr. won an Oscar. It prides itself in amassing other odd films and video clips, such as footage from the film My Uncle the Alien, anti-drug rap videos featuring sock puppets, cat massage instructional videos, clips from strange ballerina tapes, and a public safety message featuring a character called Yello Dyno that confronts “tricky people who want to harm children.”

At one point, it had a limited run of The Part In The Neverending Story Where Artax Dies On Loop For Three-And-A-Half Hours. Just let that sink in.

In addition to selling accessories and movies, Everything Is Terrible! uses its storefront as a studio and video archive. Known for displays featuring wild costumes and puppets, the L.A. shop is designed to host art shows and installations, live performances, and anything else that floats their funny fancy.

Check It Out IRL

The store, which the group says is more of a giant art piece than a retail space, is located at 754 S. Atlantic Boulevard in East Los Angeles. It features apparel and the group’s own films and video compilations, as well as hats, posters, drink koozies, and, of course, Jerry Maguire-themed merchandise.

Visitors can pose against a wall featuring about 500 Jerry Maguire tapes or, even better, with a life-sized Jerry figure that Everything Is Terrible! members Dimitri Simakis and Nic Maier label “the most beautiful and unnecessary thing to possibly ever exist.”

Sadly, none of the tapes from the group’s private collection are for sale. So you can forget about trying to buy a copy of Jerry Maguire. You can, however, bring any copies you happen to own, or find in your daily wanderings, to the store, or mail them to:

If you want to see some internet gold, take a stroll through East L.A. and get your fix with a store full of memes—before they were cool.

Next post Can Only Particular Areas Of Your Tongue Taste Certain Flavors?