Scientists have just named a new ant species in the forests of Borneo. It’s called the Colobopsis explodens, and—like the name suggests—it explodes.

The foraging ants in the colony leave the nest from about 6 a.m. to 6 p.m., while a group of workers guard the entrance. As each ant passes into the nest, they are thoroughly inspected. If the nest is ever invaded, the workers have the ability to self-destruct against their enemies.

C. explodens abdomen is filled with glandular sacs. When in danger, they flex so hard that it bursts their abdomen apart. The force of tearing their own abdomens apart covers their enemies with a sticky, toxic goo contained in the sacs. This goo slows down the invader and eventually kills them. According to scientists, the goo has a slightly spicy smell.

As with many ant colonies, there are a number of specialized types within a single species, and though regular workers explode, a larger soldier type member of the colony employs a different defensive measure.

Instead of exploding, they have flat heads, which they use to act as living doors for the nest, blocking intruders from physically entering or by plugging holes that open up. 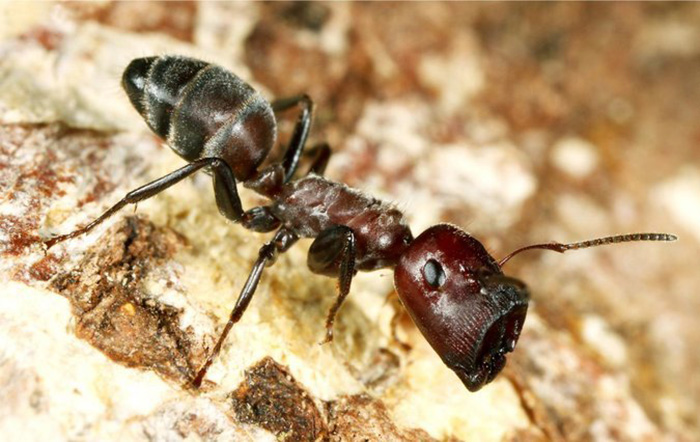 These exploding ants have been known to western scientists since as far back as 1916, but officially naming an ant as a new species is hard work. Scientists have to capture and make records of all the different types of ants in the colony.

Most ants in the C. explodens colony are female, and the winged males proved elusive until one entomologist happened to have a colony living by her kitchen door. One day, she noticed a few flying out, and immediately chased them through the forest, catching them in a jar.

There are actually a number of ants known to explode in the larger Colobopsis group, but the researchers involved hope their study of C. explodens will act as a model, teaching us about the behavior of those other ants as well.

Next post Crocodile Moats Are Fiction, But Bear Moats Are Not

Previous post Halloween In Spring: Saint Mark’s Eve Is A Day You Can See Ghosts