An eyeless, hairless cat named Jasper has taken social media by storm with more than 80,000 followers! 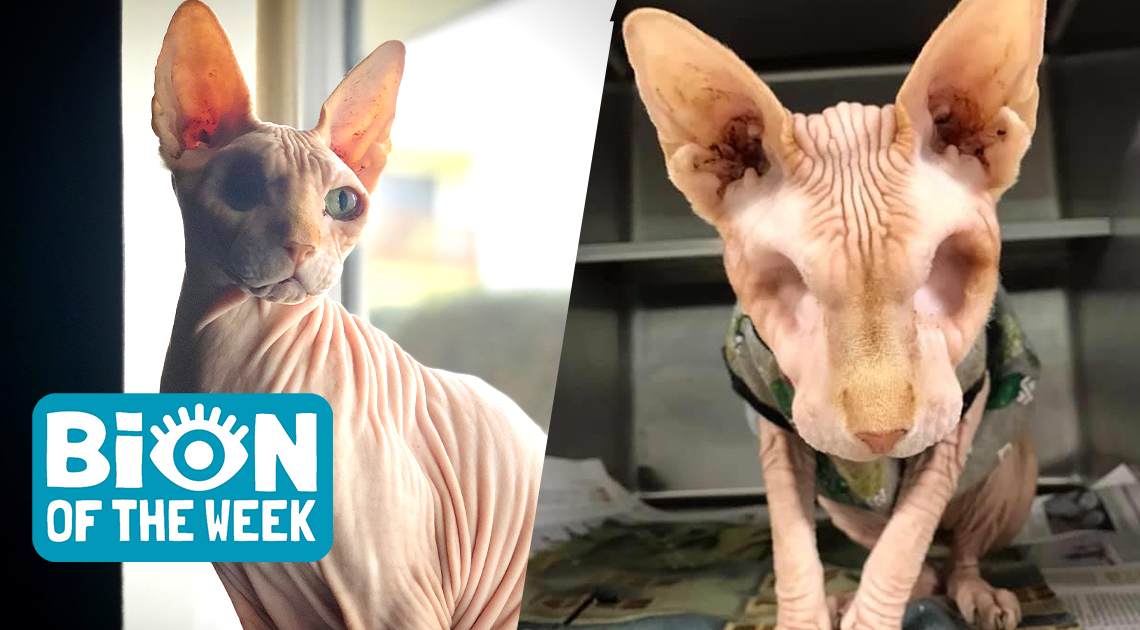 [September 14-September 20, 2020] An official UFO protocol, an elderly python’s miracle of life, and the historical discovery of a prehistoric cadaver—all round-up in this week’s weird news from Ripley’s Believe It or Not!

Japanese Military: If You Know, UFO

On Monday, Japanese Defense Minister Taro Kono issued a statement to the Self-Defense Forces (SDF) detailing proper procedures for handling UFO sightings that could potentially threaten Japan’s security. Members of the SDF were ordered to photograph and record any unidentified aerial phenomena and take the appropriate steps to ensure a proper analysis of the sightings, including public testimony. But before anyone packs a bag and prepares to beam up, there is no reference to aliens in this statement. The Defense Ministry made it clear that the SDF has never encountered otherworldly UFOs, formally known as UAPs (Unidentified Aerial Phenomena). In fact, after issuing the statement, Kono clarified that he does not believe in alien UFOs and that these orders are strictly to prevent a foreign invasion where the aircraft may be unidentifiable to the untrained eye. The statement comes a month after the U.S. Defense Department established an Unidentified Aerial Phenomena Task Force intended to understand these mysterious objects and the nature of their appearance. 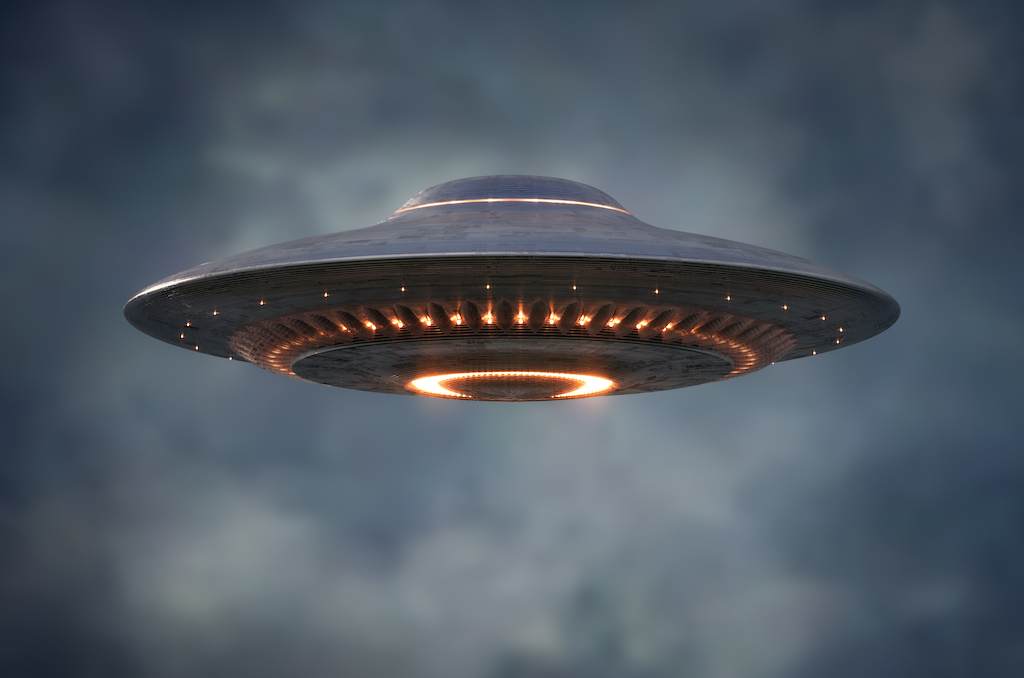 Call this old dame, Ms. Independent! The St. Louis Zoo has a mystery on their hands after a 62-year-old ball python proved she’s still got it by laying seven eggs without having seen a male in 15 years! Oddly enough, the nameless python making babies without a mate isn’t even the strangest part of this story! Although unusual, asexual reproduction is not considered rare for ball pythons. What’s genuinely wild is that not only is she the oldest snake ever to lay eggs, but also the oldest ever to live! Ball Pythons have an average lifespan of 30 years, so she’s well past her senior years. Having been donated to the zoo in 1961, when she was just 3-years-old, the python has zoologists baffled, including Mark Wanner, the zoological manager of herpetology. According to Wanner, the zoo will publish information about the situation when genetic testing is complete. If it turns out the eggs were produced via mating, the only other ball python in the zoo, a 31-year-old male, would have some explaining to do. In the meantime, two of the eggs did not make it, while two others are being used for genetic study, with the remaining three in incubation, due to hatch in a month! 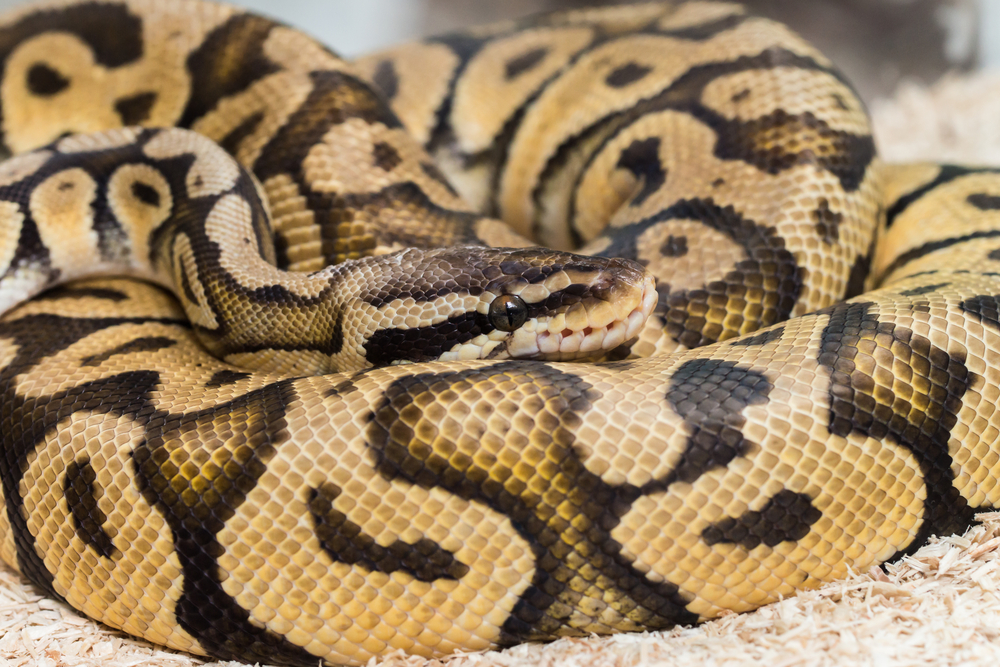 An 88-Year-Old Man Taking the World in Stride

Brad Hathaway of Massachusetts is gearing up for the final steps of his 24,900-mile journey. He’s well on his way to completing his goal of walking the total distance of the Earth’s circumference at the grand age of 88! Hathaway began walking in his mid-50s at the request of his doctor, who suggested he walk three miles a day to help manage health issues, including diabetes and heart problems. Hathaway then took it upon himself to map out his entire hometown of Mattapoisett. Since then, he’s gone above and beyond his doctor’s request, walking up to 10 miles every day, even when it rains. It wasn’t always easy, though. As time went on, walking got harder for Hathaway, and he began using a walking stick, eventually turning to a walker to assist him along the way. He’s found ways to entertain himself during these daily strolls, making friends and even a nice chunk of change along the way! Hathaway collected discarded items during his walks, turning one man’s trash into treasure to the tune of $7,000! Having logged his miles over time, he decided to tally up the total and realized he’s only a mile away from 24,901—the entire distance of the Earth’s equator. Hathaway is putting his walking on hold until October 3, when he will be completing that final mile as a fundraiser for the Mattapoisett Land Trust to increase the amount of conservation land the trust holds in the Aucoot area. Donations can be made through Hathaway’s GoFundMe page!

??‍♂️ | In just a few weeks, 88-year-old Brad Hathaway will have walked the equivalent of the circumference of the world.https://t.co/7JJjsRVNww

On Monday, researchers reported that Russian reindeer herders had unearthed the pristinely preserved carcass of an Ice Age-era bear! Discovered due to melting permafrost on Bolshoy Lyakhovsky Island, the bear was so well-preserved that all of its organs, and even its nose, were intact! It is believed to be a species of brown bear that lived 22,000 to 39,500 years ago. Previously, all animal findings from this era were nothing more than bones, making this discovery truly unbelievable. The carcass will be studied at the North-Eastern Federal University in Yakutsk, which specializes in researching prehistoric species. Lena Grigorieva, a researcher at the university, said, “this find is of great importance for the whole world.”

HUGELY EXCITING! A cave bear carcass has been recovered from the permafrost on an Arctic island – “the first and only find of its kind.” The preservation is remarkable; all internal organs are present. And that nose! Wonderful ? NEFU https://t.co/U6nayPIsIp pic.twitter.com/gzggoCyHmA

If you’re searching for another animal to follow on Instagram, look no further! An eyeless, hairless cat named Jasper has taken social media by storm, earning more than 80,000 followers! Jasper’s rise to stardom is a tale of hope and inspiration. This feline was a seemingly healthy two-year-old when his mom Kelli adopted him, but she quickly realized something was up. He soon began showing symptoms of the feline herpes virus, including runny eyes, leading to a corneal ulcer in his right eye in November 2013. Eventually, the eye had to be removed, turning him into a one-eyed kitty until a few years later, when he developed the same type of ulcer in his left eye. It’s the removal of both eyes that gives Jasper his unique appearance. Kelli says he’s a happy cat, who gets along with his cat siblings, especially Tessa, who is also blind. According to Kelli, Jasper adapted to life without eyes with ease. From the moment she brought him home, he began exploring and climbing from the couch to Kelli’s shoulder. She started posting pictures of him and his siblings on Instagram, quickly gaining Jasper a massive following. As one fan said, “I’m obsessed with Jasper, he looks like a living Halloween decoration.” 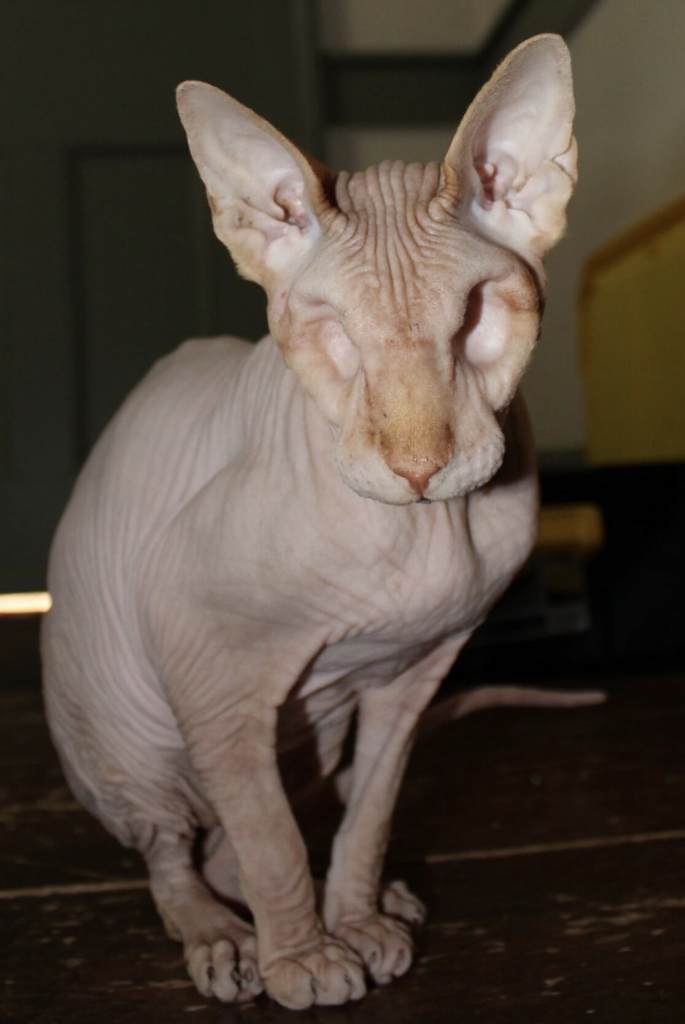