Imagine you’re getting ready to sit down for your annual Thanksgiving dinner. The harmonious aroma of turkey, potatoes, and cranberry sauce is wafting through the house. You’ve likely fasted all day to ensure you have enough stomach room for a heaping plate of it all. (Perhaps, you even wore your special stretchy pants.)

Instead of sitting down for this once-a-year Thanksgiving feast, picture your family’s table dressed with a spread of venison, swan, and shellfish. Not exactly screaming, “Thanksgiving dinner.” In this case, you’d be eating exactly what the Pilgrims and the Wampanoag Indians prepared for the very first Thanksgiving!

While the gathering could have served the traditional turkey and corn pairing, it’s just as likely that the feast included a different bird—possibly swan—in addition to venison and shellfish, historians say. The corn was probably a bit off-menu too, as it could have been mashed up and used as a type of porridge.

New England Today magazine reprinted a letter that Edward Winslow, an English teacher at the time, wrote home to a friend, where he described the day like this:

“[F]or three days we entertained and feasted, and they went out and killed five deer, which we brought to the plantation and bestowed on our governor, and upon the captain and others. And although it be not always so plentiful as it was at this time with us, yet by the goodness of God, we are so far from want that we often wish you partakers of our plenty.” 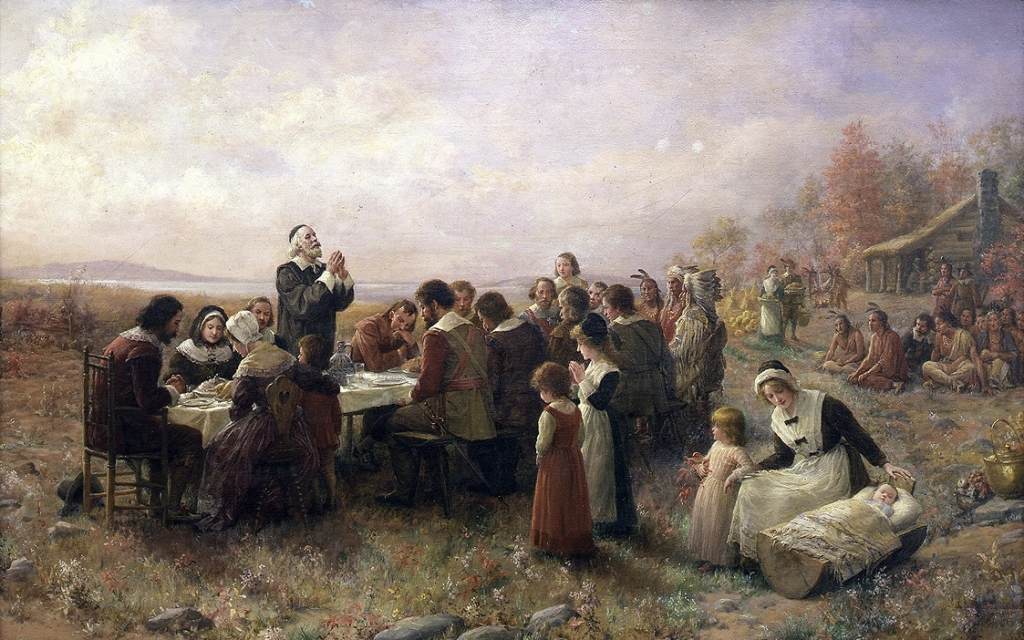 “The First Thanksgiving at Plymouth” (1914) By Jennie A. Brownscombe

So, it’s clear that this first gathering had quite a bit of food. But, was their deer dish accompanied by one of the Thanksgiving staples: cranberry sauce? While the pilgrims probably knew about the fruit, the lack of available sugar would have prevented them from turning it into a sauce. Historians say it would be another 50 years before anyone did that.

Most of the food present on their table was actually shellfish. After all, they were feasting in New England! Where else can you get the best lobster, oysters, and clams? All were probably on the table, in addition to mussels and even eels!

Perhaps the most perfect pair alongside turkey, stuffing, and cranberry sauce is the beloved potato—mashed, sweet, baked, you name it! Unfortunately, none of the above were present for the first feast. Potatoes weren’t popular enough yet to make their way to the table, but turnips could’ve been. Then again, we’re not sure anyone ever got too excited about homemade mashed turnips.

So, what about dessert? What about pumpkin pie? Well, there was no butter or wheat flour for the crust, and of course, no ovens for baking. The closest anyone got to pumpkin pie were hollowed-out pumpkins, filled with milk and honey, and roasted. Certainly tasty, but it’s no pumpkin pie. 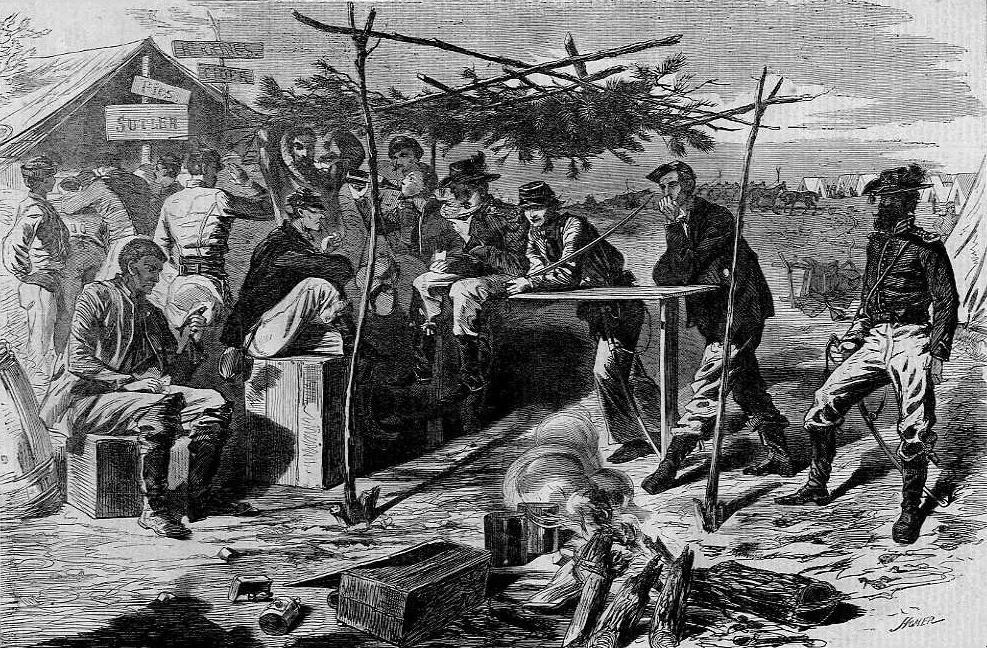 Thanksgiving in Camp, a wood engraving drawn by Winslow Homer and published in Harper’s Weekly, November 29, 1862.

Aside from the food on the table, what’s the biggest difference between today’s Thanksgiving dinner and those of yesteryear? No women.

Winslow reported that 90 men attended the feast, and NPR interprets this fact to mean no women were allowed. Those present viewed the dinner as a political meeting, not as the family get-together we celebrate today. And that meant the women stayed home.

“The Wampanoags and the Pilgrims were cementing a military alliance,” Robert Krulwich of NPR, wrote. “Massoasoit, the Wampanoag king, was there. So was the English governor, William Bradford. The first Thanksgiving was mostly a guys-only event where the English women, says [writer Andrew] Beahrs ‘were likely doing the bulk of the cooking.’”

Next post Making Moves With Mose, The Two-Legged Dog