We’ve got to hand it to the fish. We really do. They’ve done a lot for us. 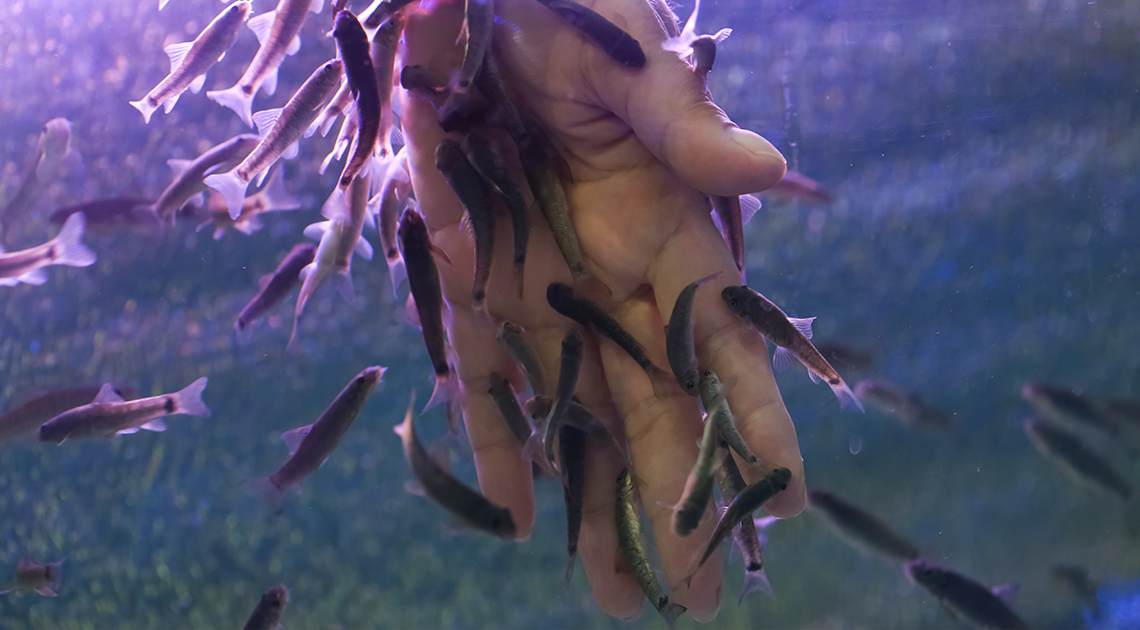 Believe It or Not! fish have most recently been linked to the evolution of our human hands and fingers.

That’s right! A new study suggests that our hands and fingers evolved from the fins of Elpistostege, a four-limbed fish that lived about 380 million years ago.

One of the most significant events in the history of life was when fish evolved into tetrapods, crawling out of the water and eventually conquering land.

New research out today suggests human hands likely evolved from the fins of the Elpistostege fish.https://t.co/1Zmon1BNOx

In March 2020, John Long, of Flinders University in Australia and Richard Cloutier, of the Université du Québec à Rimouski (UQAR) in Canada, published a paper in Nature describing how they’ve been studying the first complete Elpistostege specimen, which they discovered in eastern Canada 10 years ago.

“One of the most significant events in the history of life was when fish evolved into tetrapods, crawling out of the water and eventually conquering land,” they wrote for EarthSky.org. “The term tetrapod refers to four-limbed vertebrates, including humans.

“To complete this transition, several anatomical changes were necessary,” they continued. “One of the most important was the evolution of hands and feet.”

The Elpistostege seems to resemble a giant eel with four flipper-like legs, which were thought to enable it to crawl through shallow water onto land, way back during what is known as the Late Devonian period, millions of years ago. But this water-to-land evolution has been debated for years.

Still, the 2020 study provides new, tantalizing evidence. Tiny, radial bones exist in a series of rows in the Elpistostege pectoral fins, and they act just like fingers.

The difference? The bones are locked inside the fin. But they’re there, and scientists say they probably helped better distribute weight when the creature was crawling.

A Nature paper describes the discovery of a fossil fish with skeletal digit-like appendages in the pectoral fin provides insights into the origins of the vertebrate hand. The fossil is the most complete specimen of Elpistostege watsoni. https://t.co/SusDtT3CvB pic.twitter.com/bsyGeRFd1s

“Other four-limbed creatures … have hands that look and function quite differently than ours do,” the pair wrote for Scientific American. “In birds and bats, they help to form delicate wings; in elephants, they support limbs as big around as tree trunks. But the basic structure is the same.

“The fossil preserves in its fins bones comparable to the ones that make up our fingers, showing that digits evolved before vertebrates left the water,” they continued. “This discovery overturns the conventional wisdom about when and how the hand evolved and shines new light on the rise of tetrapods, a pivotal event in the history of life on earth.”

The pair reported that along with the fingers, their specimen included the presence of a humerus (an arm), radius and ulna (forearm), and carpal bones (wrist).

“Elpistostege blurs the line between fish and vertebrates capable of living on land,” Long and Cloutier wrote. “It’s not necessarily our ancestor, but it’s now the closest example we have of a ‘transitional fossil’, closing the gap between fish and tetrapods.”

Plainly, it suggests that our fingers and hands first evolved in the fins of elpistostegalian fish.

But trust us. This isn’t just some big fish story.

The next time you visit a Ripley’s Aquarium or try to win a goldfish at the local fair, just stop for a moment and remember to be tankful for our little underwater friends.