In 1990, British Airways Flight 5390 Pilot Survived Being Sucked Out Window!

Captain Timothy Lancaster, was ripped from his seat and sucked out of the missing cabin window.

According to the International Air Transport Association, on average, 8 million people fly every day. Over 3 billion people take to the skies each year, so it’s safe to say that commercial flights are something that will affect everyone’s life at some point.

Knowing the number of flights taking place across the globe each day, it seems self-evident that most flights go off without a hitch. The chances of being injured in a plane crash are so low that it makes aviophobia seem a little silly.

But then you hear the story of British Airways Flight 5390, and being afraid of flying starts to make a lot more sense.

On June 10, 1990,  British Airways Flight 5390 took off from Birmingham, England and headed towards Malaga, Spain. The plane, a BAC 1-11, was carrying 81 passengers and four flight crew.

The plane took off without incident and was gaining altitude for 20 minutes when passengers heard an explosion.

The cause of the disturbance was the left windscreen of the cockpit had separated from the plane.

To put this in perspective, it would be as if you were driving and your windshield just randomly flew off. Except you’re driving at over 500 miles per hour and suspended at 23,000 feet in the air.

As a result of the malfunction, the pilot, Captain Timothy Lancaster, was ripped from his seat and sucked out of the missing cabin window. 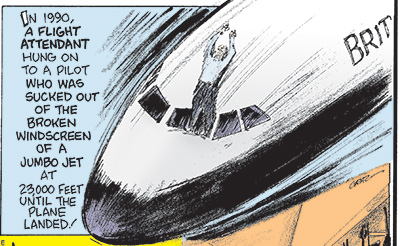 The door to the flight deck was blown open, giving passengers an unobstructed view of everything that was happening. The papers and debris from the cabin started blowing towards the nose of the plane.

Captain Lancaster was saved by the quick thinking of flight crew member Nigel Ogden, who happened to be on the flight deck. Ogden grabbed Lancaster’s legs and clung to a chair to hold them steady.

The 81 passengers watched as another crew member, Simon Rogers, rushed onto the flight deck, strapped himself into the pilot’s seat, and then grabbed hold of Lancaster, allowing Ogden to move to the back and treat his hand which he had gashed open when reaching for the captain.

I could see a body hanging out of the window, with two men and a woman hanging onto his legs. -Passenger Margaret Simmonds

The co-pilot, Alistair Atcheson, put on an oxygen mask, told passengers what happened, and warned them to prepare for an emergency landing.

Atcheson made an emergency landing at Southampton Airport.

Emergency personnel helped to get Captain Lancaster down safely, and rushed him to the hospital. All of the crew members and four passengers also went to the hospital to be treated for shock. They were released later that same day.

Lancaster suffered a fractured elbow, wrist and thumb, and frostbite on one hand, but other than that, he was unharmed.

Another plane was sent to Southampton Airport, and all but seven of the passengers boarded it to complete their trip to Malaga.

The malfunction of flight 5390 resulted in no fatalities at all. That fact alone is amazing, and it’s due to the quick thinking and ability of the crew.

The crew were tremendous. We have nothing but praise for them. It was a tremendous example of alertness, and we are very proud of them. – Spokesman Anthony Cocklin