It was an extra-long holiday weekend for a 62-year-old Florida man who spent a large portion of it clinging to his capsized boat 86 miles off the coast until being rescued by a Chiquita banana boat! 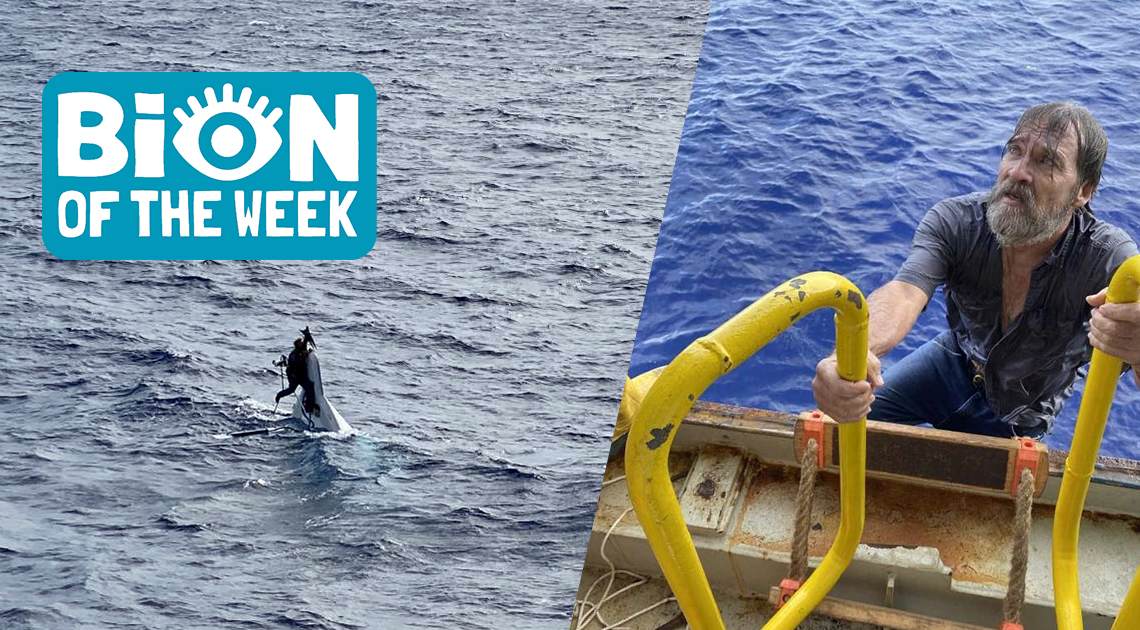 [November 30-December 6, 2020] A mysterious missing monolith, ancient Amazonian art, and a holiday hitchhiker returns to the wild—all round-up in this week’s weird news from Ripley’s Believe It or Not!

Where in the World is Utah’s Missing Monolith?

It’s been a very weird year, but possibly the strangest story of 2021 is still unfolding before our eyes! Last week’s account of the discovery of a mysterious monolith in the Utah desert has spawned into a global hunt after vanishing just days later.

The 10-to-12-foot tall metal structure caught the eyes of Aero Bureau and wildlife resource officers on a November 18th flight over the Red Rock Country area during a routine bighorn sheep count. Upon further investigation on the ground, the team discovered that the monolith was firmly planted into the ground but found no evidence of how it wound up at the desolate spot. 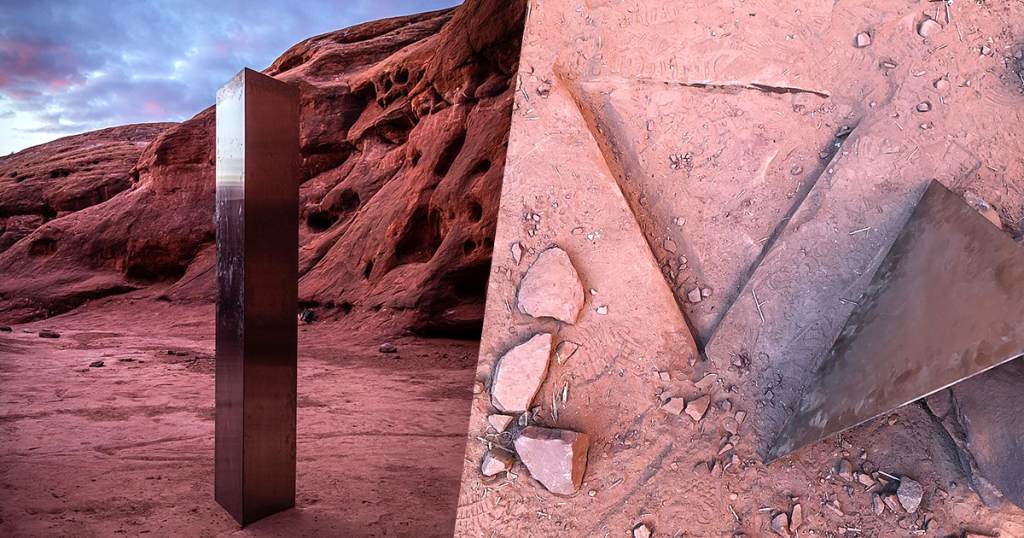 Photo by Patrickamackie2 via Wikipedia

While theories surrounding the structure are running wild on the internet, there are still no absolutes in this modern mystery. As curators of all things strange and unknown, we want answers and are willing to pay for them! Ripley’s will pay $10,000 to the first person who claims ownership of the monolith or gives us an exclusive—and accurate—tip on where to find it.

A Colombian wall of art referred to as the “Sistine Chapel of the ancients” has been revealed for the first time since the Amazon’s first humans created it over 12,500 years ago!

Located in an almost unreachable area of the Serranía de la Lindosa mountain range in the Northwest Colombian Amazonian basin, the eight-mile-long wall features intricate drawings that depict the lives of a lost civilization, back when the Amazon was a savanna.

Though the rock art was discovered last year, the Channel 4 network in Britain kept the finding under wraps as they filmed a new series called “Jungle Mystery: Lost Kingdoms of the Amazon.” According to the series’ presenter, Ella Al-Shamahi, the site will take generations to study and doesn’t even have a name yet!

Tuesday marked the end of a real-life Christmas movie adventure for Rocky the Owl as she returned to the wild after hitching a ride to New York City on Rockefeller Center’s famous Christmas tree. The saw-wet owl was found in the Norway spruce’s branches after traveling a whopping 170 miles from upstate New York.

Rocky—short for Rockefeller—was given the all-clear by veterinarians at the Ravensbeard Wildlife Center, where she was cared for after her discovery.

“She is a tough little bird, and we’re happy to see her back in her natural state,” read the caption on the center’s Facebook page, accompanied by a video of her release.

Deep in the ocean lies a world of mystery and intrigue. While we may not know all the secrets of the underwater world, we learned this week that there are eels in the abyss, after a record-breaking swarm of eels was coaxed from the darkness almost 10,000 feet below sea level.

Footage released shows 115 cutthroat eels swimming into the light 9,800 feet below sea level, coaxed only by a bit of bait. The swarm is the most deep-sea fish ever to be recorded simultaneously in the entire ocean! Shot in the Clarion-Clipperton Zone, researchers working on the study were shocked to see so many animals in the area, as it is extremely isolated and food is scarce.

While food is scarce in the CCZ, precious minerals and elements are not, turning the area into an international mining hotbed. Researchers headed to the site to explore the while mining is still prohibited in many places, as there is a large concern that it could destroy these unknown ecosystems.

After dropping food in three different locations, scientists observed large numbers of eels at this depth coming to feed. They caught some of the eels in traps and identified them as cutthroat eels, a species so rare that fewer than 10 can be found in captivity worldwide! 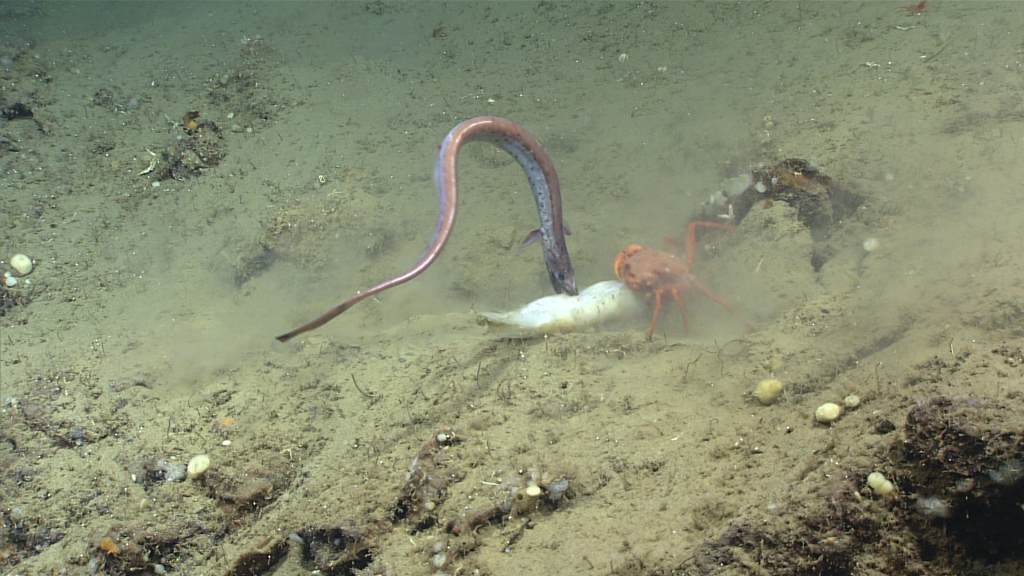 Image courtesy of the NOAA Office of Ocean Exploration and Research, Deep Connections 2019.

It is unknown if the cutthroat eels are permanent residents of the area or simply swimming by for a stint, but the observations thus far reiterate how little we know about the deep sea and its inhabitants.

It was an extra-long holiday weekend for a 62-year-old Florida man who spent a large portion of it clinging to his capsized boat 86 miles off the coast until being rescued by a Chiquita banana boat!

Stuart Bee is no stranger to boat life, residing on his 32-foot Sea Ray, Stingray, but an innocent trip into the ocean for some stargazing turned frightening when a mechanical issue caused water to flood and capsize the boat. Bee had fallen asleep when water came rushing in, leaving him unable to send a distress signal but giving just enough time to get out through the hatch.

After seeing that Bee left Cape Marina at Port Canaveral in Florida around 4 p.m. Friday and did not return by Saturday morning, a marina member alerted the U.S. Coast Guard that Bee was missing, as he typically doesn’t take the boat out overnight.

A 62-year-old man was discovered desperately clinging to the hull of his capsized boat in the waters off the Florida coast on Sunday — about 24 hours after he was reported lost at sea .. 😟 pic.twitter.com/kfaxGBWRTq

The Coast Guard began their search but knew the chances of finding Bee were minimal. That is, until Sunday, when he spotted a 738-foot shipping boat, the Angeles, heading his way. The vessel was hauling Chiquita bananas from Honduras to Delaware when crew members saw Bee holding onto his boat, waving his shirt in the air. Once he was aboard, crew members gave him some dry clothes and notified the Coast Guard, and brought Bee along for the ride.

“Those guys are just the nicest people ever,” said Bee upon arrival.

Next post The Terrible Tale Of Hans Trapp, The Christmas Scarecrow